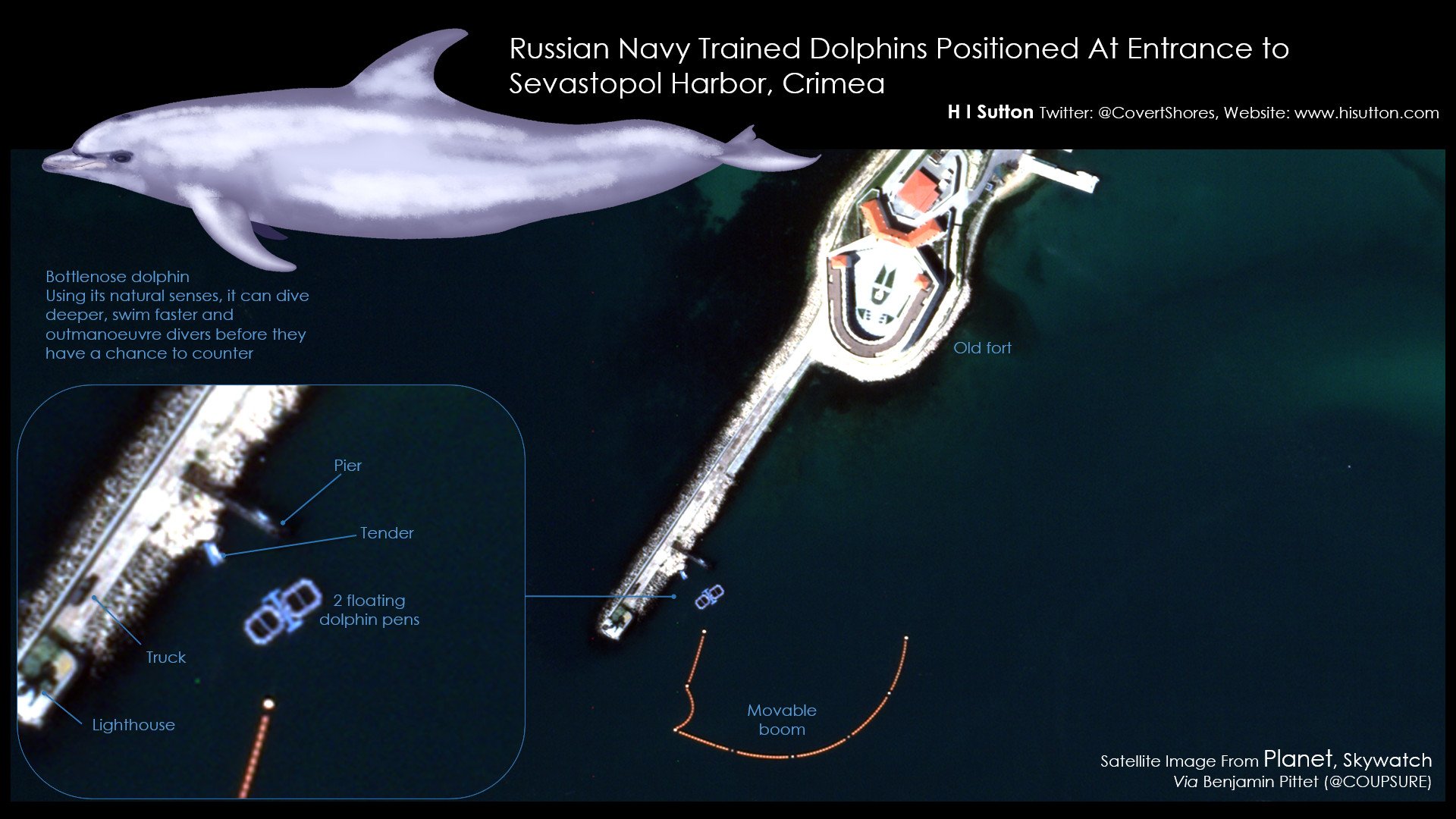 Russia has deployed trained dolphins during its invasion of Ukraine to protect a Black Sea naval base, USNI News has learned.

The Russian Navy has placed two dolphin pens at the entrance to Sevastopol harbor, sheltered just inside a sea wall. The pens were moved there in February, around the time of the invasion of Ukraine, according to a review of satellite imagery.

Sevastopol is the Russian Navy’s most significant naval base in the Black Sea. The dolphins may be tasked with counter-diver operations — a traditional role both the U.S. and Russia have trained marine mammals for. This could prevent Ukrainian special operations forces from infiltrating the harbor underwater to sabotage warships.

Inside the port, many high-value Russian Navy ships are arranged out of range of Ukrainian missiles but vulnerable to undersea sabotage, according to satellite photos. During the Cold War the Soviet Navy developed several marine mammal programs, including dolphin training in the Black Sea. The unit was based at Kazachya Bukhta near Sevastopol, where it still is today.

With the collapse of the Soviet Union in 1991, the unit transitioned to the Ukrainian military. Although there were attempts to keep it operational, it barely stayed open. With Russia’s 2014 annexation of Crimea, the unit came under Russian Navy control. Subsequently, the marine mammal programs have been expanded and returned to operational service. 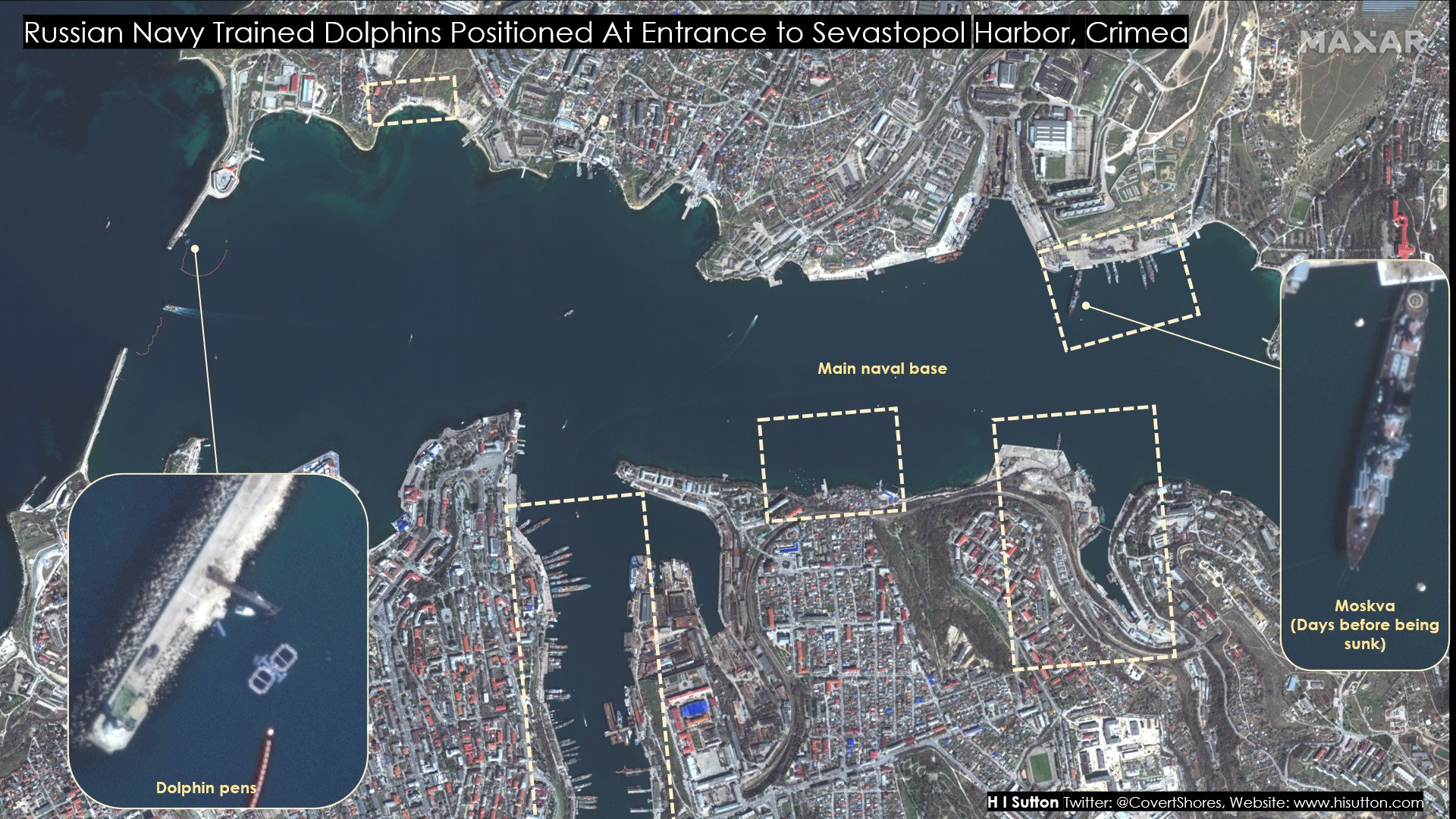 This is part of the Russian military’s wider reinvestment in marine mammal programs in the past 10 years. This has included the Black Sea Fleet’s unit and a separate operation in the Arctic.

In the Arctic north, Russia’s Northern Fleet uses different types of marine mammals. Beluga whales and seals, both with heavy layers of fat to keep warm, are better protected against the cold than the bottlenose dolphins used in the Black Sea.

The Arctic unit has also become more active in recent years. Beluga whale pens have now also been established at Olenya Guba, the secretive naval base of GUGI (Main Directorate Of Deep Sea Research). The intelligence organization is believed to be responsible for key undersea espionage assets of the Russian military.

On April 23, 2019, a trained beluga whale turned up in northern Norway. Nicknamed ‘Hvaldimir’ by the locals, it is believed that this whale escaped from the Russian Navy program, according to the BBC.

It’s not just the Arctic that has shown signs of increased use of Russian marine mammals. In 2018 the Black Sea Fleet’s dolphins were deployed for several months to Russia’s Mediterranean Sea naval base in Tartus, Syria, according to satellite photos. The mobile pens used for that deployment were very similar to the ones currently positioned in Sevastopol harbor.

It is unclear whether Ukraine has planned any combat-swimmer operations against Sevastopol. But dolphins are widely considered by naval analysts a considered an effective defense against divers.