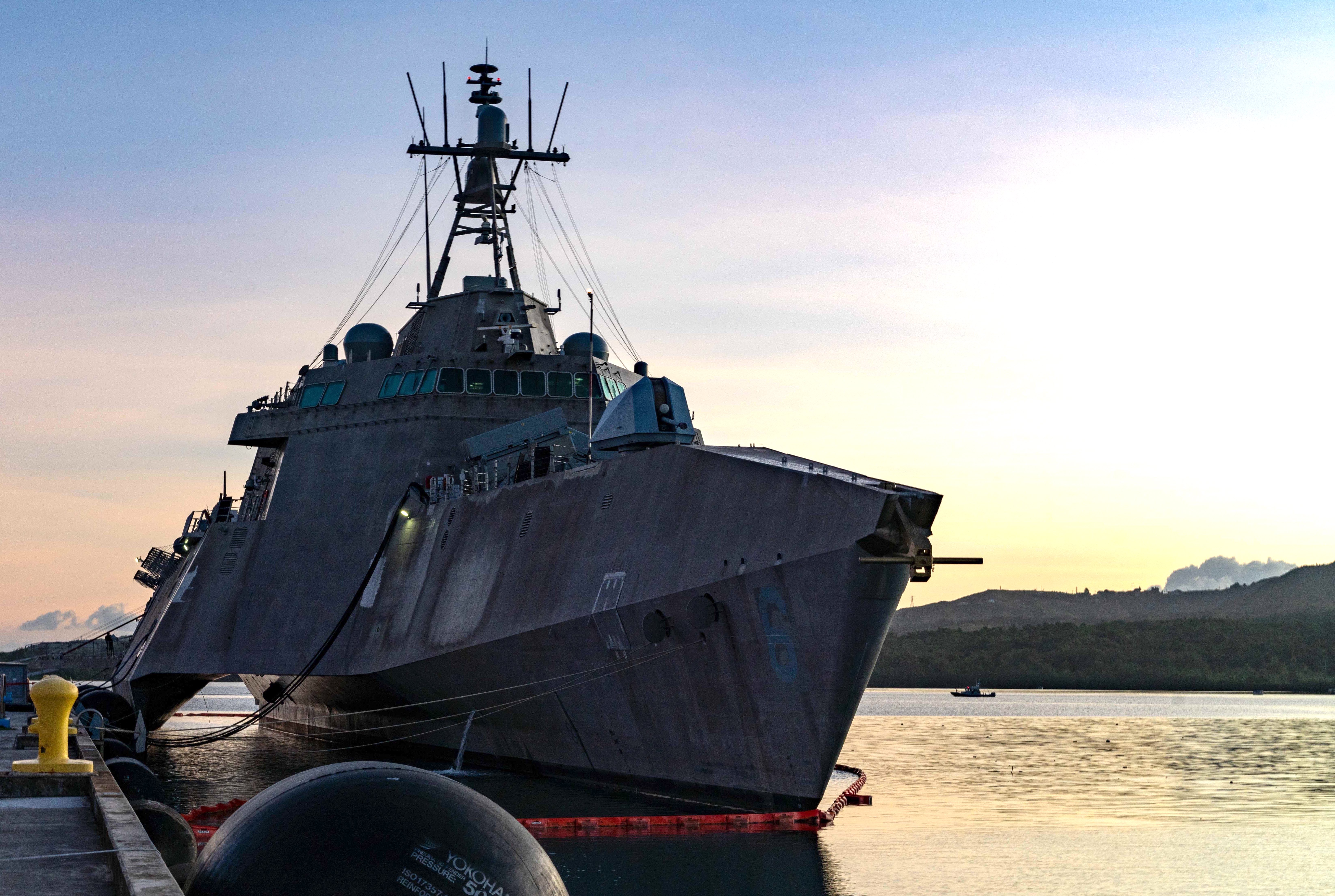 The Department of the Navy’s first long-range shipbuilding plan in three years proposes multiple fleet procurement schemes for the Navy and forecasts the service decommissioning two Independence-class Littoral Combat Ships in the coming years, according to the document.

The Fiscal Year 2023 30-year shipbuilding plan, obtained by USNI News, shows the Navy decommissioning two Independence-class LCS – USS Jackson (LCS-6) and USS Montgomery (LCS-8) – in FY 2024. Jackson entered the fleet in 2015, while Montgomery was commissioned in 2016. Both ships were built by Austal USA.

The Navy also wants to continue decommissioning its aging Ticonderoga-class cruiser fleet, starting with USS Antietam (CG-54), USS Leyte Gulf (CG-55) and USS Shiloh (CG-67) in FY 2024. Under the proposal, the Navy would decommission the entire cruiser fleet by the end of FY 2027, including the ones that are currently in the cruiser modernization program. 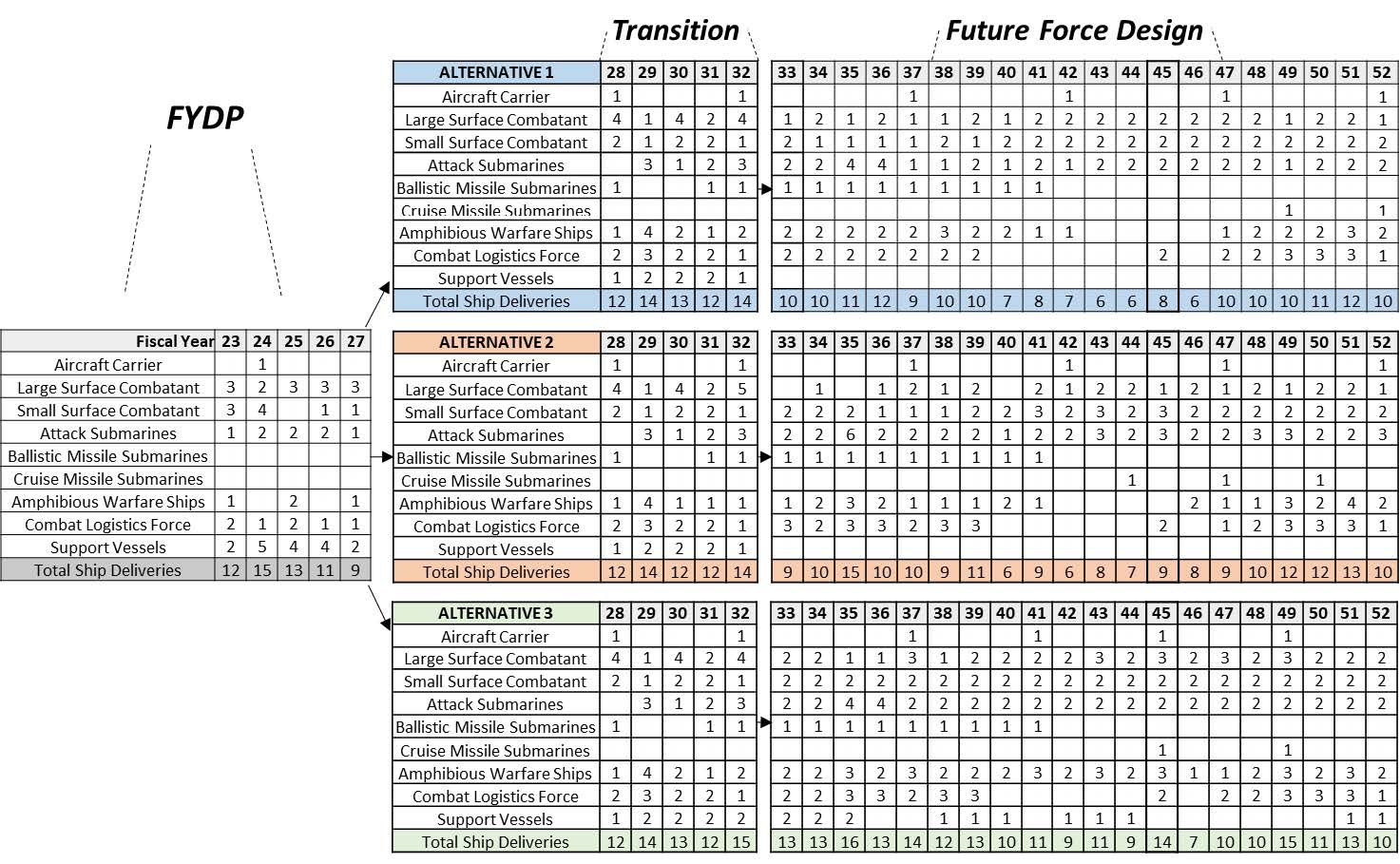 The first two options would be for “a budget with no real growth,” while the third option “represents an additional $75B real growth beyond the [Future Years Defense Program] in FY2022 constant dollars,” according to the proposal.

“The increased procurement level, informed by industrial base capacity and on-time and on-budget performance, achieves 326 manned battle force ships in the mid-2030s, and ultimately achieves 363 manned battle force ships in FY2045,” the document continues. The year 2045 was the timeline former Defense Secretary Mark Esper used for his shipbuilding analysis during the Trump administration.

While the proposal forecasts the Navy’s thinking for the next 30 years, the ultimate decision on which ships to purchase and which ships to retire rests with Congress, which has repeatedly criticized the service for decommissioning ships at a faster rate than it can build new ones.

The three procurement schemes show what ships the Navy could purchase between FY 2028 and FY 2032, a timeframe the service is calling a “transition” period after the FY 2023 five-year spending plan, and between FY 2033 and FY 2052, which the Navy is calling the “future force design” timeframe.

While the first two alternatives only show the Navy buying one Ford-class aircraft carrier between FY 2028 and FY 2032, the third option shows the service purchasing one in FY 2028 and another in FY 2032.

“A decision on CVN 82/83 two-ship buy is required no later than FY25 and will be evaluated during upcoming force structure and industrial base studies,” the document reads. “The Department is reviewing Large and Small Surface Combatant and Attack Submarine procurement quantities in FY2028-2032.” 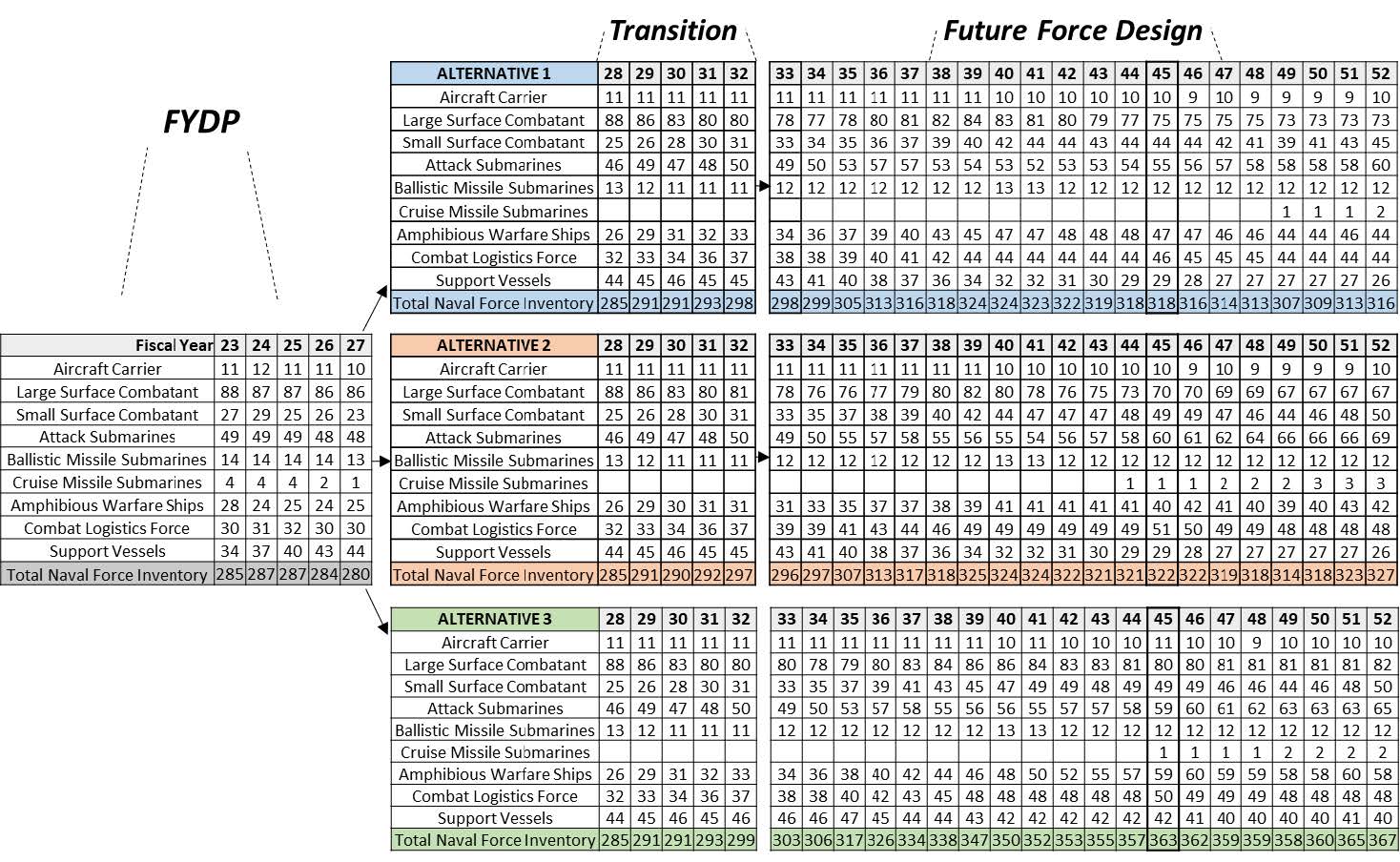 The blueprint shows the Navy decommissioning USS Nimitz (CVN-68) in FY 2025 and USS Dwight D. Eisenhower (CVN-69) in FY 2027, which aligns with the 50-year service lives for the Nimitz-class carriers.

The document notes that it’s prioritizing readiness before capacity, which aligns with Chief of Naval Operations Adm. Mike Gilday’s goals.

“Assuming no real budget growth, the two low ranges of the plan do not procure all platforms at the desired rate (e.g., DDGs, SSNs and FFGs at two ships per year), which industry needs to demonstrate the ability to achieve, but do maximize capability within projected resources, industrial factors, and technology constraints to build the most capable force. Overall, this approach accepts risk in capacity in order to field a more capable and ready force.”