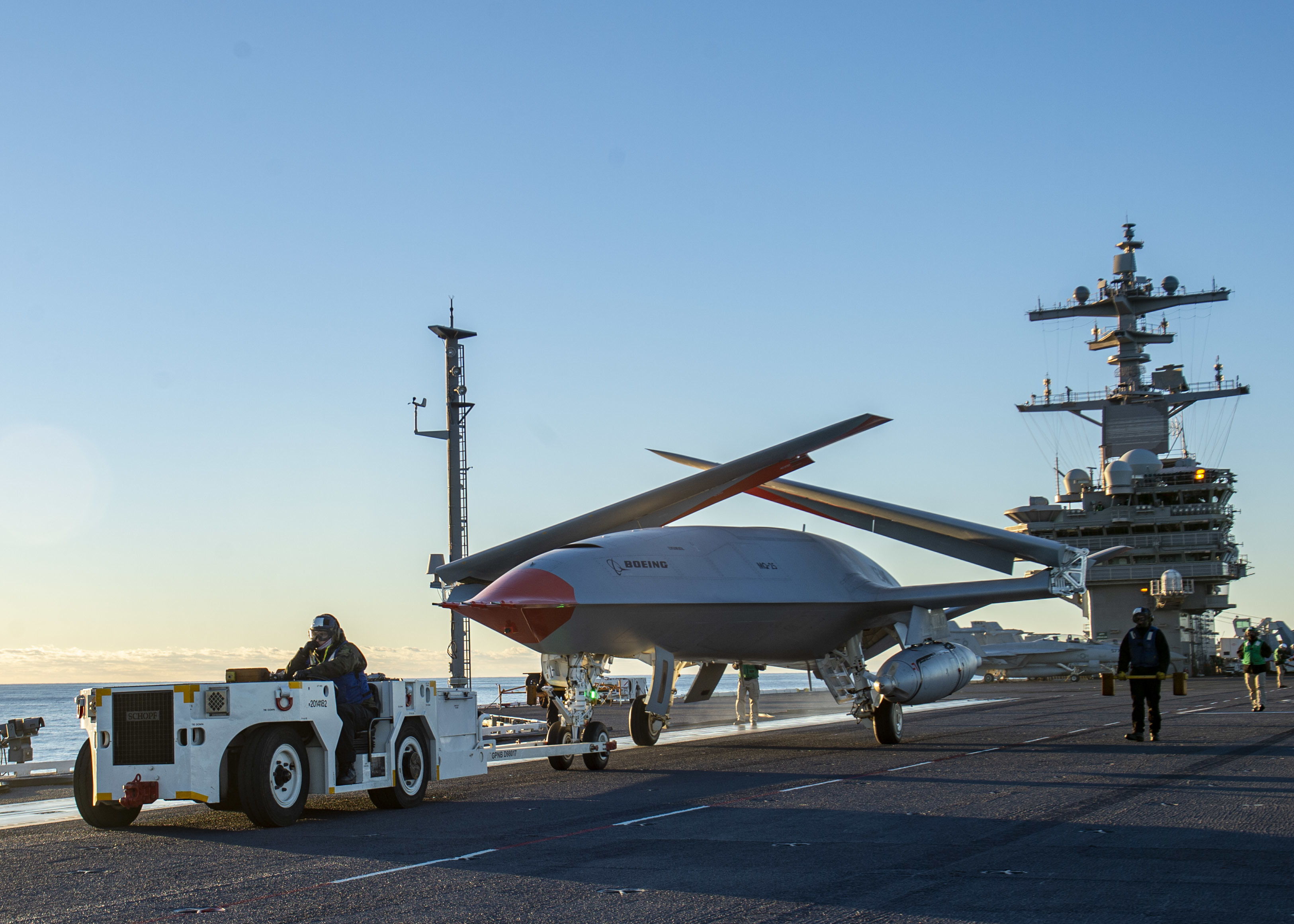 A Boeing unmanned MQ-25A aircraft is given operating directions on the flight deck aboard the aircraft carrier USS George H.W. Bush (CVN 77) on Dec. 13, 2021 in the Atlantic Ocean. U.S. Navy Photo

NATIONAL HARBOR, Md. – The Navy’s MQ-25A Stingray unmanned aerial refueling is set to deploy on an aircraft carrier in 2026, a service official said on Tuesday.

Vice Adm. Kevin Whitesell told a panel at the Sea Air Space 2022 symposium that the service was on track to reach initial operational capability for the MQ-25As by 2025 and deploy the aircraft on USS Theodore Roosevelt (CVN-71) by 2026.

“We now need to continue to further develop MQ-25A to ensure that it’s going to be able to function within the air wing. [Fly] up to 500 miles away from the ship and be able to pass gas on the way out,” Vice Adm. Scott Conn, deputy chief of naval operations for warfighting requirements and capabilities (OPNAV N9), told reporters on Tuesday.
“It’s all about expanding our operational reach. Based on the environment and the threat, we need to continue to get more operational reach, continue to operate further and further away from our carriers. The MQ 25 is an important aspect of that.”

Previously, the Navy said USS Dwight D. Eisenhower (CVN-69) and Bush would be the first carriers outfitted with the control stations and data links to field the Stingrays.

Boeing won an $805 million contract in 2018 to build the first four Stingrays in a competition that also included General Atomics and Lockheed Martin. In 2020, the Navy exercised an $84.7 million contract to buy three more, with a goal of a fleet of 76 for $1.3 billion.

The Navy is considering adding more capabilities to the MQ-25As as the tankers work more with the carrier air wing, service officials have told USNI News.

“We kind of went skinny on the initial requirements for this in order to be sure that we’re able to go fast. So MQ-25 is capable of significantly more than we are asking it to do at [initial operational capability]. So at IOC, it needs to be able to operate around an aircraft carrier and be able to conduct aerial refueling and that’s as far as we went,” Rear Adm. Andrew Loiselle, who leads the chief of naval operations air warfare directorate (OPNAV N98), told USNI News in December.
“The rest of it will be spiral developed because it’s got significant additional capabilities with a mission bay and weapons phase that, you know, we plan to take use of in the future.”