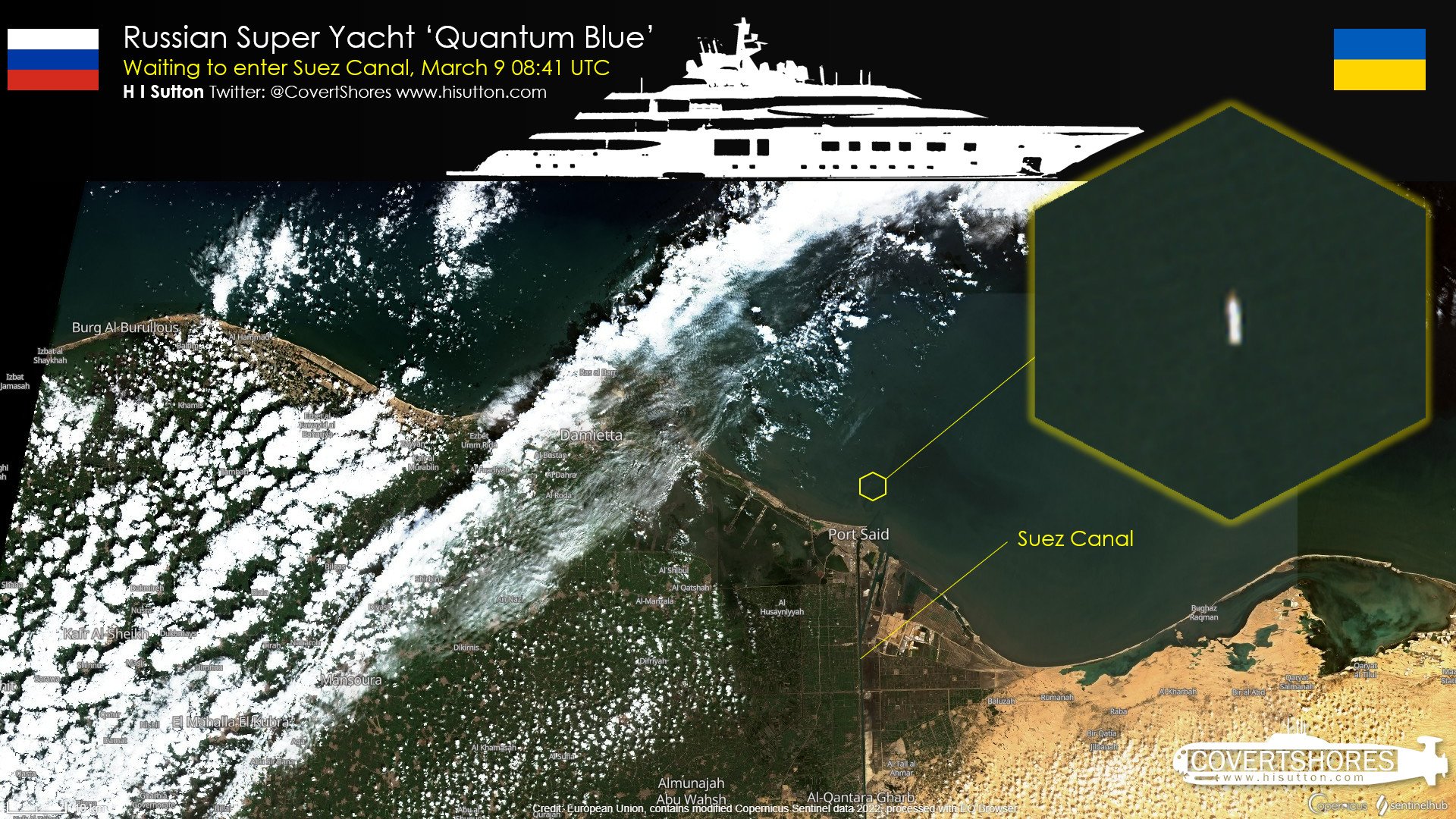 Mega-wealthy owners of the superyachts value privacy and discretion and keep as low a profile their vessels allow and recent events in Ukraine have increased the desire of some superyacht owners to hide their movements.

Yachts owned by Russia’s oligarchs may be subject to being seized under international sanctions. Several vessels have already been detained. These include Amore Vero, reportedly owned by Igor Sechin, a former Russian administration official and CEO of the Rosneft energy company. Lady M, is reputedly owned by Alexei Mordashov, a steel and mining billionaire.

Some boats are going dark, turning off their automated identification systems and running to safe harbors. Some are be sailing to remote Russian ports not normally associated with luxury yachts.

One such yacht is Amadea. This 106-meter (348 ft) yacht is reputed to be owned by Suleyman Kerimov, a Russia-based billionaire and politician, who is on the sanctions list.

Amadea stopped transmitting her position on AIS (Automated Information System) on Feb. 24, just hours after the start of the invasion. AIS is required, under Safety Of Lives At Sea (SOLAS) rules. The International Maritime Organization’s rules require, “AIS should always be in operation when ships are underway or at anchor.”

An exception is allowed if the captain believes that the ship is under threat and that the AIS might compromise the safety or security of the vessel. Even the captain must inform the relevant authorities that they are doing it and why. Circumstantially, it appears that these yachts are turning it off as a deliberate attempt to avoid detection. 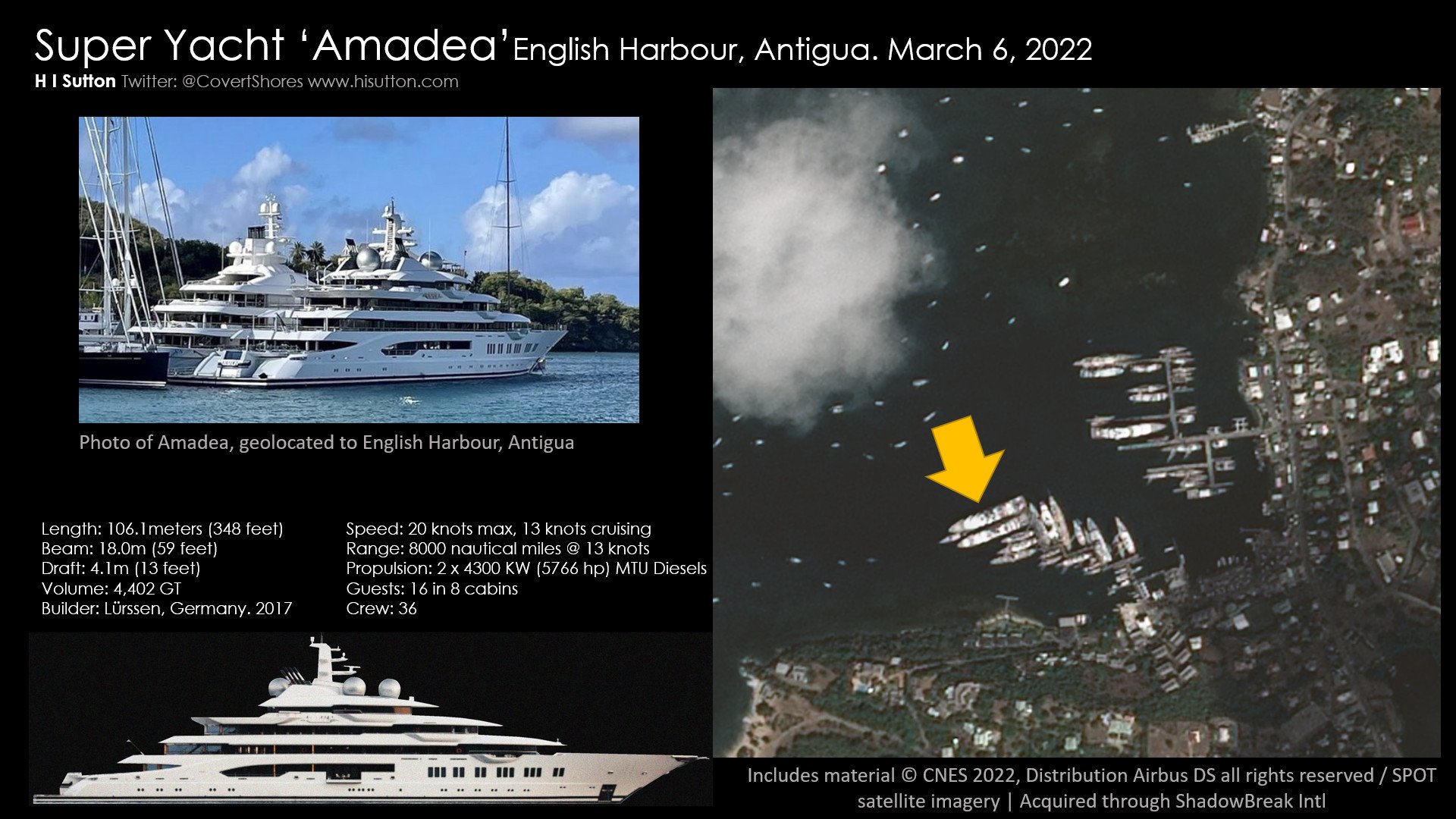 Amadea was reported as having arrived in English Harbour in Antigua by specialist channel eSysman Super Yachts. Photographs and video, provided by anonymous contributors, showed the yacht there. USNI News has been able to collaborate this with satellite imagery and other open sources. The yacht arrived in its Caribbean hide-out on March 5 or 6 and is visible in satellite imagery provided to USNI News by ShadowBreak Intl.

Several other yachts associated with Russian oligarchs have also started atypical journeys. Several appear to be headed to the Suez Canal. One example is Quantum Blue, a 104-meter (340 ft) yacht, reportedly owned by Sergey Galitsky, co-owner of Russia’s largest retailer.

Quantum Blue had temporarily been detained in Monaco by Monegasques and French authorities on March 3. However, Galitsky was not on the European Union sanctions list and the boat was released. It sailed straight to Port Said, at the entrance to the Suez Canal.

Amadea has since left Antigua and remains ‘dark’ on AIS. Her final destination is unclear –like the final destination of many of these yachts is subject to speculation. An obvious destination in the Indian Ocean might be the Maldives or Seychelles where they are likely safe from the sanctions. According to eSysman Superyachts, certain vessels may ultimately be headed to Vladivostok in the Russian Far East.