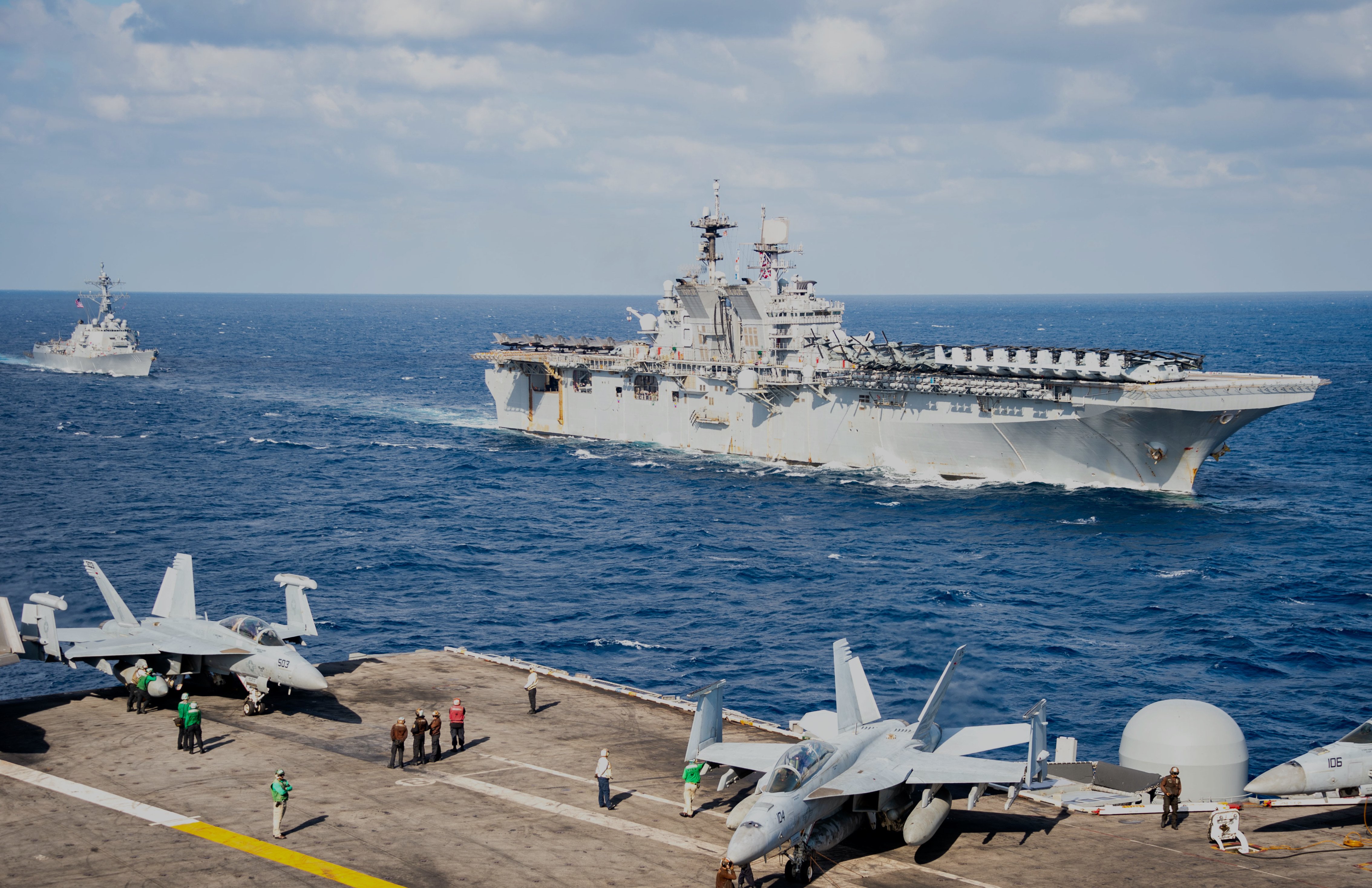 “I’ve concluded – consistent with the analysis – that we need a naval force of over 500 ships,” Gilday said during the WEST 2022 conference, co-hosted by AFCEA and the U.S. Naval Institute.

“We need 12 carriers. We need a strong amphibious force to include nine big-deck amphibs and another 19 or 20 [LPDs] to support them. Perhaps 30 or more smaller amphibious ships to support Maritime Littoral Regiments… to 60 destroyers and probably 50 frigates, 70 attack submarines and a dozen ballistic missile submarines to about a 100 support ships and probably looking into the future about 150 unmanned.”

According to Gilday’s list, that force would be about 513 ships with 263 manned combatants, plus 100 logistics and supply ships and 150 unmanned vessels. Gilday told reporters later that the total would include Littoral Combat Ships.

The numbers Gilday said on Friday are largely in line with a notional high-end total included in the abbreviated Fiscal Year 2022 long-range shipbuilding plan. The ongoing congressionally-mandated force structure assessment will inform the Fiscal Year 2024 budget, Gilday said. But details of the FSA have largely been under wraps as the Pentagon continues to craft its next national defense strategy.

“We’re going through another force structure assessment right now, but based on the hard work we’ve done over the last five or six years we’re thinking about how we would fight,” Gilday said. “How would we fight differently in terms of a wide, vast ocean like the Pacific?”

For the last three years, the Navy’s future force structure has been in flux, undergoing several different fleet reviews while the Department of the Navy and Pentagon leadership underwent unprecedented churn in 2019 and 2020.

The attempt at a force structure assessment led to the Trump administration releasing an ambitious fleet plan toward the end of its tenure. The Biden administration shelved the plan shortly after President Joe Biden took office, prompting the Navy and the Office of the Secretary of the Defense to again reevaluate the force under new Pentagon leadership and the prospect of a flat budget outlay. 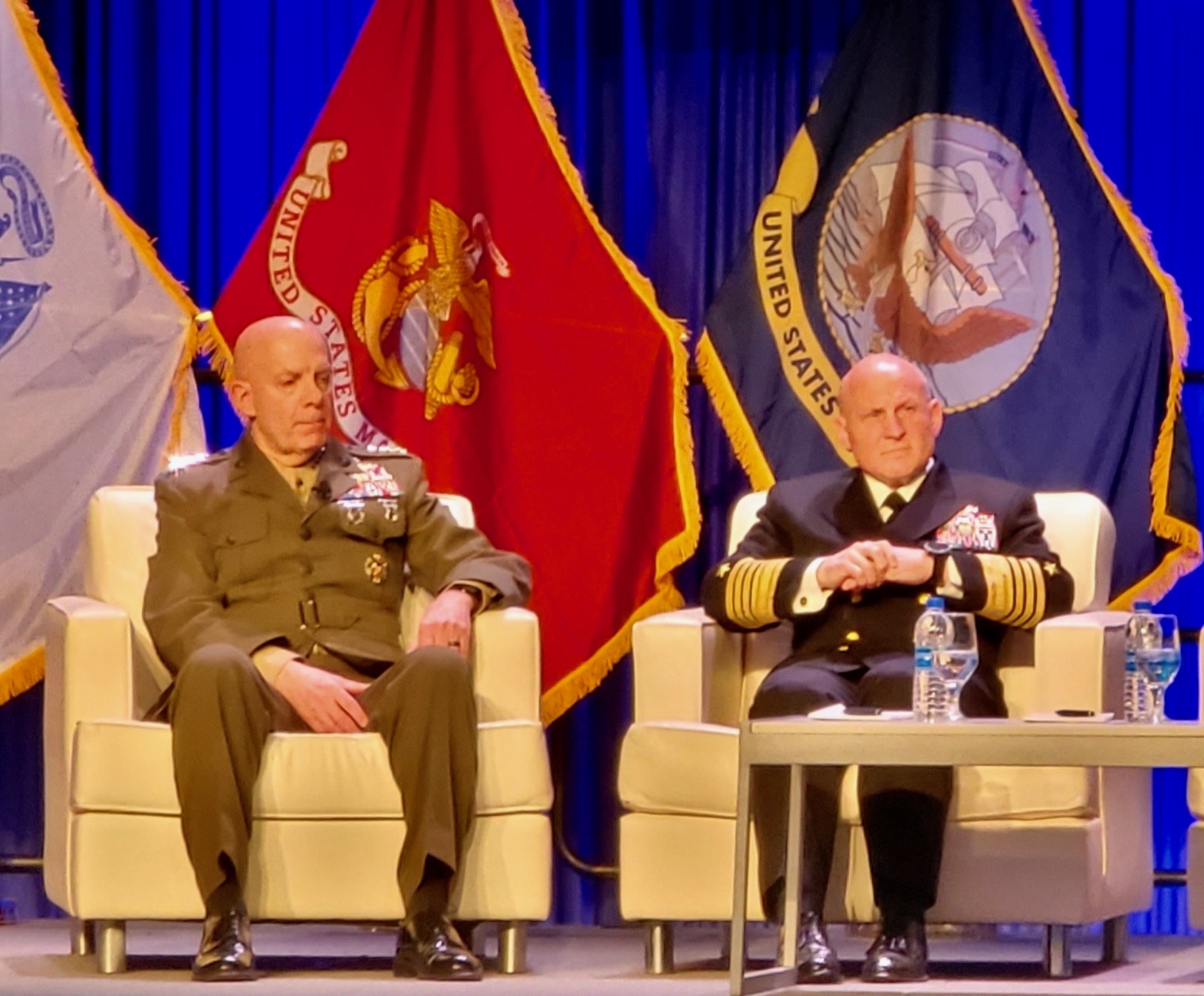 Over the last year, the Navy has set out on an aggressive testing program to refine the emerging Distributed Maritime Operations concept that will connect crewed and unmanned ships and aircraft to operate in concert across the vast distances of the Pacific.

In particular, Large Scale Exercise 2021 tested DMO – in addition to the Marines Corps’ Expeditionary Advanced Base Operations and Littoral Operations in a Contested Environment – across three combatant commands in a networked exercise with live and simulated exercises. The Navy and Marines are also testing deployed carrier strike and amphibious ready groups with complicated battle problems that further test the underlying concepts. Meanwhile, in U.S. 5th Fleet, the ongoing testing of small unmanned vessels is refining how the service thinks about employing them in the future.

“The real message I wanted to get out of those numbers, it’s actually grounded on how we’re going to fight,” he said.

Meanwhile, the Marine Corps has an ongoing amphibious ship requirements study that it will ultimately deliver to Navy Secretary Carlos Del Toro. Marine Corps Commandant Gen. David Berger said the study is about 30 to 45 days away from completion and he expects the analysis to call for approximately 31 amphibious ships. So far, Del Toro has received two progress updates about the study, Berger said.

“If it’s anything like the previous studies – we’ve had I think 12 studies in the last 13 years – every one of them came out about 31 amphib ships,” Berger told reporters at WEST. “So I don’t know what this one will come to, but I can’t see it radically different from that. That’s requirements. That’s our Marine Corps requirement. That’s maybe different from what the nation can afford.”

The study is assessing the requirements for both large amphibious ships and the Light Amphibious Warship, which the Marine Corps wants to shuttle Marines around islands and shorelines in the Indo-Pacific. LAW is supposed to have a beaching capability so it can easily deliver Marines to the shore. While the Marine Corps is behind the push for LAW, money to purchase the platform would come out of the Navy’s shipbuilding account.

Gilday’s affirmation of the fleet follows reports the that the Biden administration is planning late influx funds into the Pentagon budget for FY 2023. USNI News reported earlier this week that the new topline could be as high $773 billion.