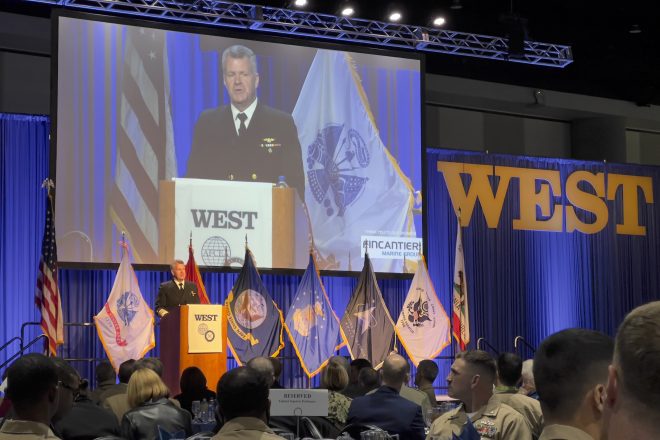 SAN DIEGO, Calif. – The military alliance with Japan is key to the U.S. strategy in the Indo-Pacific and is growing deeper as China expands regional influence, the head of U.S. Pacific Fleet said today.

“We’re seeing a more and more assertive Japan, who is rightly being more self-assertive in response to greater threats to its sovereignty every single day. So I would not advocate for the stand-up of a JTF. My advocation right now is our continued operation as is, which implements the behaviors, the habits of mind, the habits of action that lead us to become a JTF,” Paparo said at the WEST 2022 conference, co-hosted by AFCEA and the U.S. Naval Institute.

During an earlier panel at the conference, Elbridge Colby – who served as the deputy assistant secretary of defense for strategy and force development during the Trump administration – mentioned the idea of a combined forces command with Japan as a way to counter China in the Indo-Pacific.

“Pacific Fleet to a very large extent, actually, specifically in the maritime domain, which is where the very high majority of our operations take place right now, is designed by Adm. Aquilino as the supporting component, to execute and integrate those tasks. And so acting as a JTF every single day is a behavior that we’re bringing to bear. Because, as we know, events happen quickly. We have less and less operational warning of events,” Paparo said.

Paparo spoke days after USS Carl Vinson‘s (CVN-70) ended its deployment to the Indo-Pacific, where it drilled with the Japan Maritime Self-Defense Force for six planned exercises and other operations.

“They’re a great ally and very capable with their surface fleet as far as helping us out. They’re very good at the sub-surface search, you know, and grateful to have them join the strike group and steam with us because we train as an aggregate force, but then sometimes when you get to theater, we disaggregate,” Rear Adm. Dan Martin, the commander of Carrier Strike Group 1, told reporters aboard Vinson earlier this week. “It was helpful to have the Japanese jump in and plus up our numbers.”

During his Thursday keynote at WEST 2022, Paparo referenced the United States’ strategic ambiguity policy toward Taiwan.

“Taiwan represents an inflection point. If the [People’s Republic of China] unifies Taiwan by force to the mainland, this will set in motion a cascade of events across the entire Indo-Pacific. It will directly affect the United States of America, and our allies and partners,” Paparo said.

“Under the weight of that economy, and under the weight of that military pressure, Japan, South Korea, all of the vibrant economies of the Indo-Pacific – comprising seven of the world’s 10 largest militaries, comprising 60 percent of the world’s economy – all of those nations are left with a critical choice, which is either to submit to the economic and political control that will undoubtedly follow, or to arm to the teeth and go nuclear,” he continued. “And neither of those scenarios is a scenario that is going to support the security and the well-being of our nation. Know that is the visceral choice that the nation has right now.”

Tensions between the U.S. and China over Taiwan have increased in recent months, as Beijing has increased the flights of military aircraft through Taipei’s air defense identification zone (ADIZ), which is international airspace.

Last March, former U.S. Indo-Pacific Command chief Adm. Phil Davidson raised concern in Washington when he said China could have the capability to seize control of Taiwan within the next six years, a comment that has become known as “the Davidson window” among defense and national security observers.

“I worry that they’re accelerating their ambitions to supplant the United States and our leadership role in the rules-based international order, which they’ve long said that they want to do that by 2050. I’m worried about them moving that target closer,” Davidson told Congress last year, referring to China. “Taiwan is clearly one of their ambitions before then. And I think the threat is manifest during this decade, in fact in the next six years.”