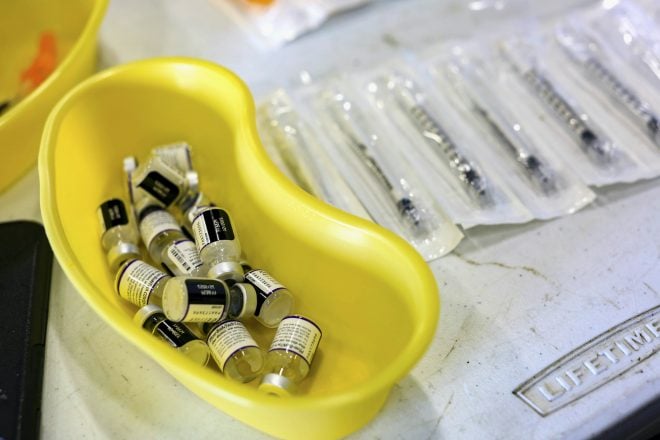 COVID-19 vaccine booster shots are pre-staged for a shot event in the hangar bay aboard USS Abraham Lincoln (CVN-72) on Dec.n 28, 2021. US Navy Photo

The Marine Corps separated 74 Marines over the past week, bringing the total number of separations over refusal to get vaccinated against COVID-19 to 640.

The Marine Corps leads the branches in the number of separations over the COVID-19 vaccine. The Navy, which has separated 270 sailors, is second. The Air Force has separated 160 active-duty airmen, and the Army has not yet separated any soldiers, according to the branch’s weekly updates.

The Marine Corps granted three additional religious exemptions to the COVID-19 vaccine, bringing the total to six. At this point, all branches except for the Army have granted at least one religious exemption, although the Navy’s was on a conditional basis for someone in the individual ready reserve.

The Marines have also granted 1,007 medical and administrative exemptions, according to the weekly update.

As of Thursday, 96 percent of active-duty Marines are fully vaccinated, with another 1 percent partially vaccinated. That number did not change over the past week.

In the reserves, 88 percent of personnel are fully vaccinated, with another 1 percent partially vaccinated. This did not change since the last update.