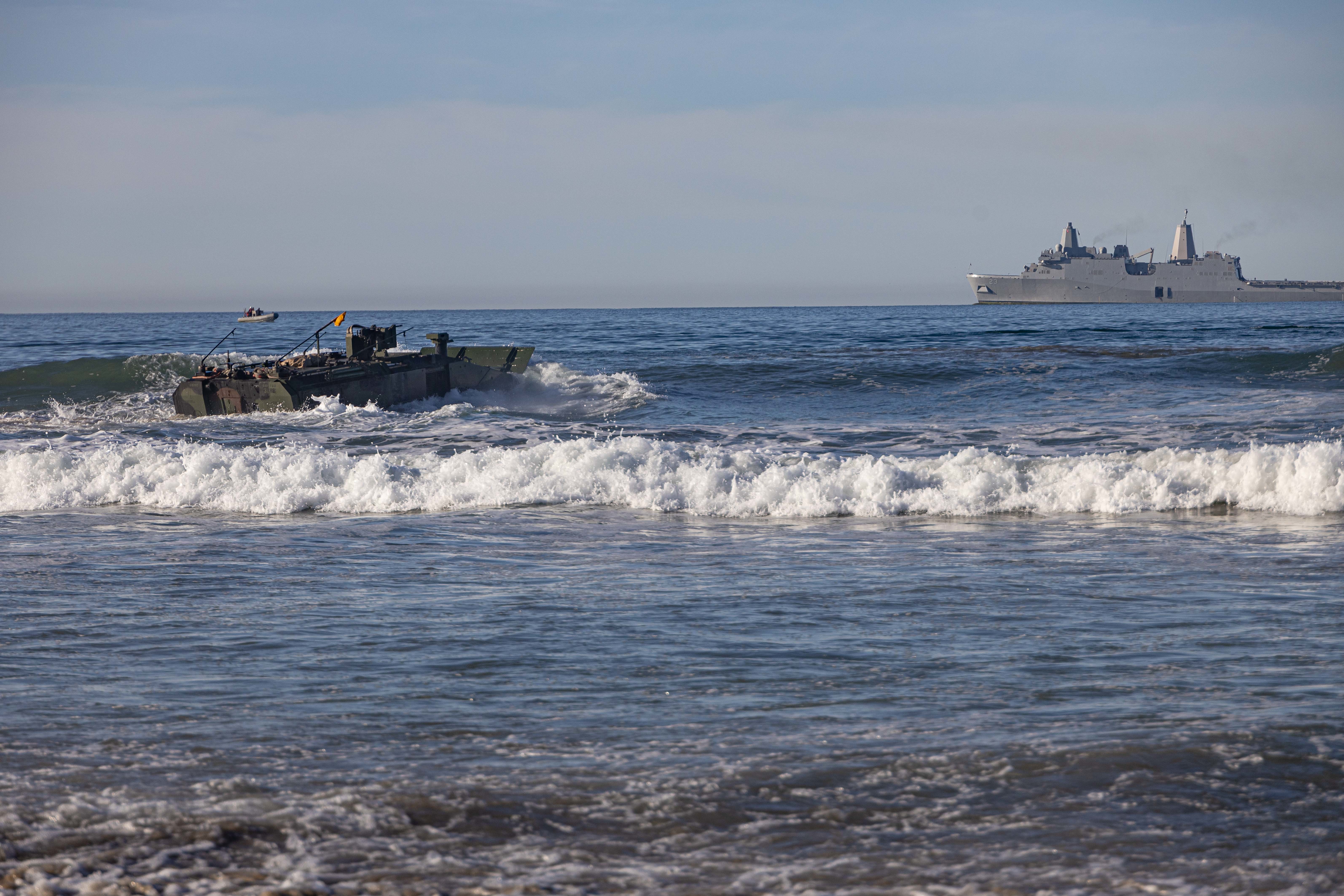 Marines put their amphibious combat vehicles out to sea over the weekend in a resumption of waterborne and well-deck operations with Navy ships, ending a five-month pause after problems arose with the ACV’s tow-rope system.

“The ACV demonstrated its survivability, maneuverability and robust swim capabilities by participating in a series of open-ocean swims” between the ship and Camp Pendleton’s training beaches, Marine Corps officials said in a news release Tuesday. Crews with 3rd Assault Amphibious Battalion, 1st Marine Division, and Anchorage sailors launched and recovered vehicles from the ship’s well deck.

“The priority now for the ACV program is to get these vehicles into the hands of Marine Corps units so we can train and become proficient with their capabilities,” the commandant, Gen. David Berger, said in the release.

The Marine Corps is counting on the advanced capabilities of the ACV to replace the existing, aging fleet of tracked, amphibious assault vehicles and bolster the service’s warfighting ability in future conflicts.

“As we strengthen naval warfighting as a force and pivot to operating in a contested littoral environment, conducting safe, realistic training on this platform advances our ability to respond swiftly to global threats in austere maritime conditions,” Maj. Gen. Roger Turner, who commands the 1st Marine Division, said in the statement. “The Amphibious Combat Vehicle is purpose-built to provide expeditionary lethality for Marines on the move.”

The ACV, “combined with L-class ships and the light amphibious warship are critical programs that afford us the ability to move forces around. The Marine Corps’ role is a forward force. This organic mobility is crucial to operate as a forward-deployed, stand-in force,” Berger added.

The eight-wheeled armored vehicles’ return to ocean and shipboard operations came after the pause due to the towing glitch that temporarily shelved training and well-deck operations with the Navy’s amphibious ships. That blue-green integration had degraded further after the Marine Corps’ separate decision to suspend most waterborne operations involving the AAV following the fatal July 2020 sinking of an AAV off San Clemente Island, Calif. In December 2021, the service issued a ban on AAV water operations. 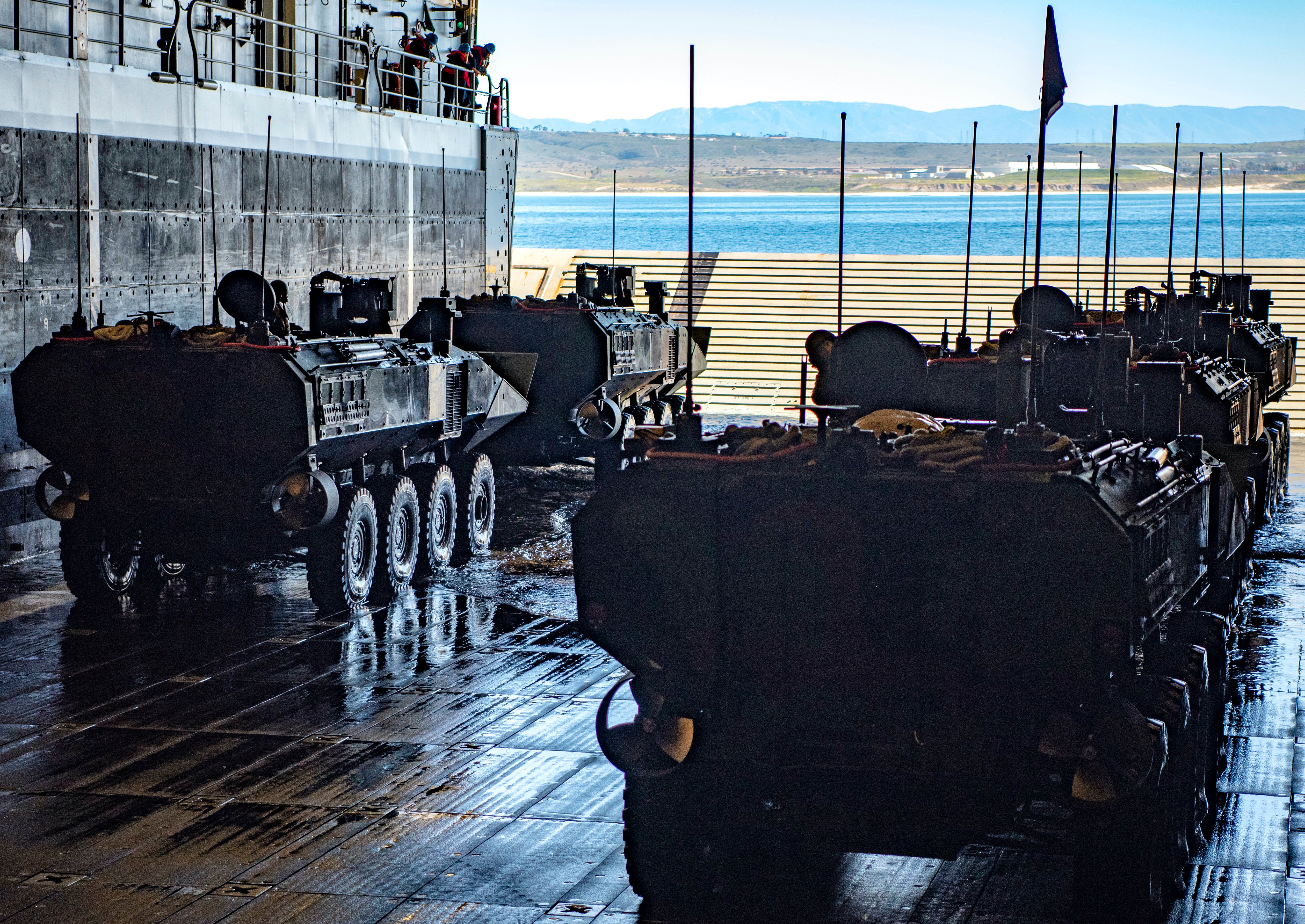 The weekend training “focused on the safety and ship-to-shore capabilities for both the Marine Corps and Navy, as part of a larger training plan to refine tactics and doctrine for amphibious operations,” Expeditionary Strike Group 3 officials said in a news release. For the Feb. 12-13 training, “Anchorage and designated safety boats remained in close proximity of the ACVs throughout the entirety of the amphibious operations, ensuring safety in all aspects of training.”

“The safety of our Marines and sailors is a top priority, especially as we continue to test the capabilities of the newest Marine Corps platform,” Rear Adm. Wayne Baze, ESG-3’s commander, said in the statement. “The sailors and Marines involved have received extensive training on operation of the craft, providing the Navy and Marine Corps team the opportunity to rehearse together for real-world events.”

“This underway period is a true testament of the rigorous training our Sailors and Marines are doing to prepare for ACV waterborne operations,” said Baze. “They spend countless hours preparing, which is evident in the professional manner in which they conducted themselves throughout this evolution. I could not be more proud of each and every one of them.”
Berger noted that the ACV, “combined with L-class ships and the light amphibious warship are critical programs that afford us the ability to move forces around. The Marine Corps’ role is a forward force. This organic mobility is crucial to operate as a forward-deployed, stand-in force.”