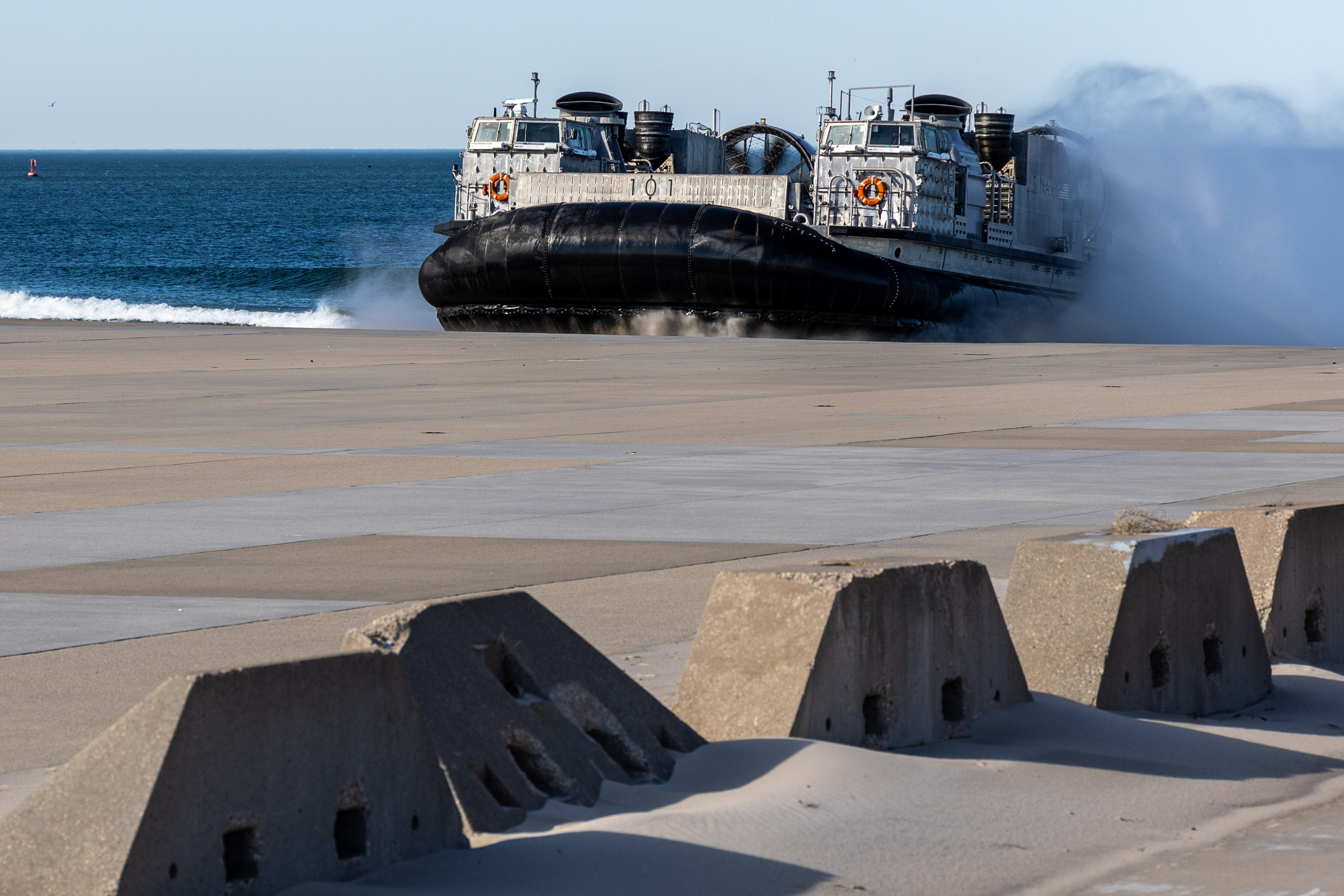 JOINT EXPEDITIONARY BASE LITTLE CREEK – FORT STORY, Va. – Two Navy hovercrafts glinted silver in the low Friday sun as they cut across the Chesapeake Bay, blasting a wake of mist 25 feet high as they headed to their new home.

Landing Craft Air Cushion 101 and 102 left the well deck of USS Carter Hall (LSD-50) to join the older LCACs of Assault Craft Unit 4. LCAC 101 and 102 are part of the Navy’s Ship to Shore and enter a testing regime before the new Textron-built craft join the Navy’s amphibious fleets.

“The real focus now for these craft and to deliver here to ACU 4 is to put them in the operator’s hands and allow those to be testing and training assets for their folks, getting sailors trained on how to operate these craft. And as we start bringing more craft they want to have the crews ready to go, so it’s a little bit of a handoff back and forth,” Capt. Scott Searles, the program manager for PMS 317 that oversees the amphibious assault ships and connector programs, said on Friday.

The two hovercraft arrived three years later than scheduled due to a string of developmental delays and cost overruns for the hovercraft program.

The Navy had originally planned for the first two LCAC 100s to deliver by the fall of 2018, but the program suffered developmental delays in part due to difficulties around the new propulsion system that used a more powerful engine and composite drivetrain to power the two massive fans that propel the LCACs, according to the Pentagon’s weapons testers.

Last year, the program tripped the Nunn-McCurdy law that calls for congressional notification for cost increases of more than 15 percent of a contract, but not to the 25 percent mark that requires Pentagon leadership to re-certify the need for the program. The costs rose from $53.7 million in Fiscal Year 2011 dollars per craft – a figure that included research and development costs – to $63.7 million in FY ’11, prompting the notification.

“The [March 26] breach is attributed to first-in-class challenges that led to increased construction costs resulting from labor and material cost growth and schedule-related issues on early craft,” the service said in a statement to Defense News. “This is not a critical Nunn-McCurdy breach that would require recertification of the program, and [the undersecretary of defense for acquisition and sustainment] has been notified. The SSC program production is now stable as the first in class challenges have been resolved.”

Leading up to the breach, the service and contractor Textron had struggled with integrating the new drive train and Rolls Royce gas turbines that power the massive fans at the aft of the LCACs, according to Pentagon weapon testers.

Regardless of the setbacks, the Navy says it needs to replace the existing LCACs.

Developed in the late 1970s and deployed in the late 1980s, the Landing Craft Air Cushion was key to how the Marines envisioned amphibious assault in the late 20th century. The Army and the Navy experimented with attack hovercraft during the Vietnam War with mixed results. However, the Navy and Marines saw value in craft that can connect ships to the shore. The concept called for LCACs flowing in heavy equipment – like tanks and artillery from the massive vehicle stowage areas on the Navy’s amphibious warships, without the need for port infrastructure – to secured beaches.

The Ship to Shore Connector program was developed after the last LCAC delivered to the Navy in 2001 as a refinement of the original concept that would take fewer sailors to operate the platform, be easier to maintain and carry more tonnage.

“Marine Corps craft, wheeled vehicles and everything have gotten heavier over the years. And so, it’s really important that these new crafts have the ability to carry more payload. And so that’s one of the other great things is we put more power into the craft and they can carry more now,” Searles said. 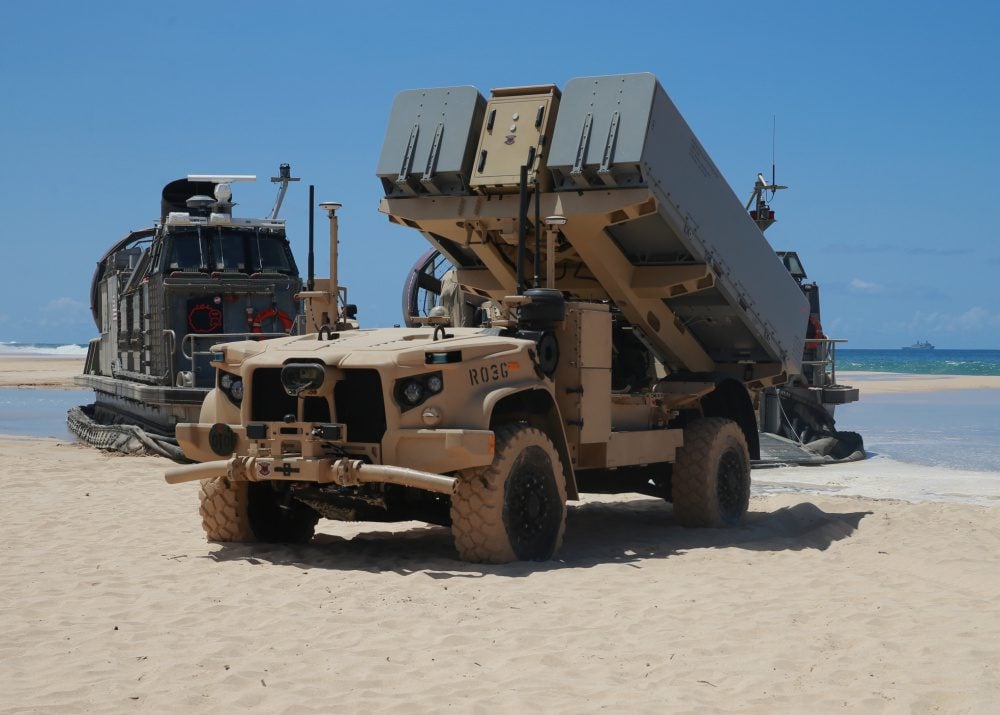 For example, the Marines Corps’ Joint Light Tactical Vehicle and emerging Naval Strike Missile launchers built on the JLTV chassis are much heavier than the existing crop of vehicles.

At the upper end, the new LCAC 100s were designed to move a Marine M1A1 main battle tank with a mine clearance sled to shore – about 75 tons – at 35 knots or faster.

However, since the initial contract with builder Textron, the Marines have shed their tanks in favor of a strategy that focuses on Pacific island-hopping rather than a massed amphibious assault.

“The Marine Corps is shifting to the Pacific, they want to, you know, change their concept of operations. They’re focused on standing up the Marine Littoral Regiment, putting a lot of time and energy into the Expeditionary Advanced Base Operations concept,” Searles said.
“We operate out of well deck and we carry Marine, we help the Marine Corps maneuver that and that mission is unchanging. It’s an enduring requirement. … We need both we need the Marine Littoral Regiments, and we need the enduring Marine Corps mission.”

The unit is set to deploy later this year and will be working to refine the LCACs’ role in the Marines Corps’ new Force Design 2030, DeFrias said.

“We’re working on those developing concepts and operationalizing them and these crafts will play a huge role in that in the movement ashore,” he said.

For the operators, the new LCAC-100s make the job of maneuvering the difficult to handle the hovercraft more manageable.

“The autopilot system on this thing is amazing. I could say it was probably designed towards a more of an autonomous-type vehicle,” Senior Chief Rafael Fana, who piloted one of the LCACs onto ACU-4’s flight line, told USNI News on Friday.
“These are monster machines.”