The Russian Navy is kicking off several simultaneous exercises, with ships from the Baltic and Black seas and its Northern Fleet sortieing from their homeports across Europe, the Kremlin has announced.

More than 140 warships and support vessels, along with 60 aircraft and a total of 10,000 personnel, will participate in the drills, according to the Russian MoD.

But the exercises have sparked alarm within Western nations in light of tensions over Ukraine. NATO countries have been surging out ships and aircraft and are accelerating planned deployments in response to Russia’s massing of troops on its border with Ukraine. Ireland protested over Russia’s plans to hold live fire exercises 240 kilometers off the Irish coast in February. Irish fisherman have pledged to disrupt the exercise, according to the BBC.

“We are letting them know that we will be fishing in our traditional fishing areas and if this has an impact on their exercise this would be considered a peaceful protest,” Patrick Murphy, chief executive of the Irish South and West Fish Producers Organization, said.
“We should be entitled to go fishing there, and if we’re fishing there then these boats, these warships, shouldn’t be having war games.”

The Press Service of the Russian Northern Fleet issued two releases on Wednesday. The first said a detachment of warships and support vessels of the Northern Fleet entered the Barents Sea as part of an exercise with the Arctic Expeditionary Group of Forces and Troops. The release stated that among the ships were the cruiser RFS Marshal Ustinov (055), destroyer RFS Vice Admiral Kulakov (626), frigate RFS Admiral Flota Kasatonov (461) along with support vessels accompanying them. 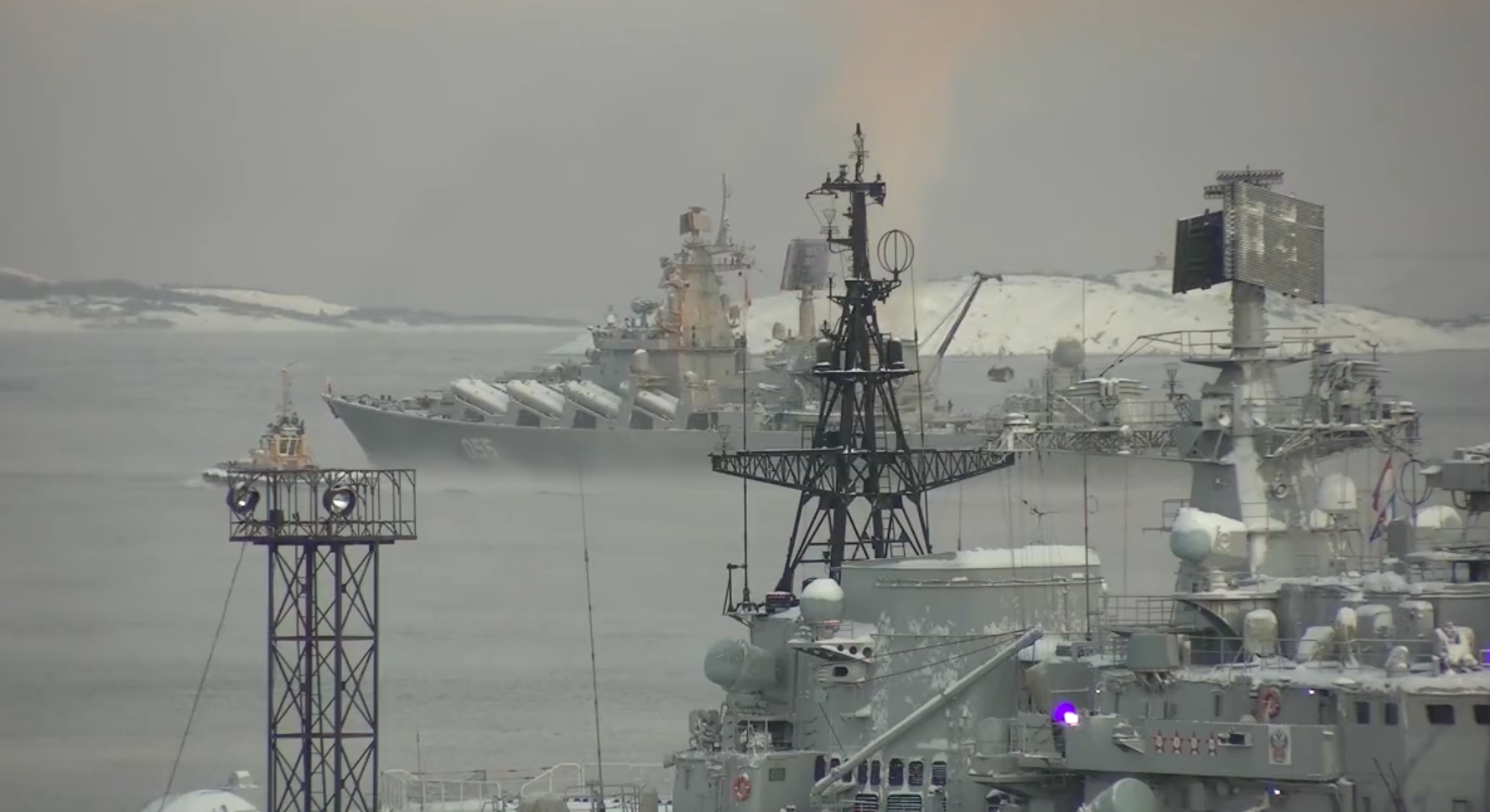 A Royal Norwegian Air Force P-3C Orion from No. 333 Squadron sighted the three warships, which were accompanied by replenishment ship Vyazma and tug SB-406, the Norwegian Armed Forces said in a Tuesday release. The Russian ships were seen at 12.20 Tuesday heading south along the Norwegian coast in the waters north of Finnmark by the P-3C, which was on a routine patrol mission. The Norwegian military did not disclose how long the P-3C followed the Russian ships, nor did it provide details on the eventual destination of the vessels, though it is likely these ships are heading to the planned live fire exercise off Ireland. It noted that Russia had announced it would be conducting major naval exercises.

A second release from Russia’s Northern Fleet said it started exercises with the Arctic expeditionary group, with Northern Fleet commander Adm. Alexander Moiseev overseeing the drills. During the exercise, the Russian Navy will evaluate the level of preparedness of the command and control organizations of the Northern fleet in planning and conducting actions to resolve crisis situations in the Arctic Ocean region, according to the news release.

The Russian Navy will also assess the coordination of actions of tactical groups of ships and units of coastal troops in the course of joint training and combat missions in the Arctic and test out tactics and methods for conducting naval combat and combat operations in the Arctic, the Northern Fleet said. It will also test out issues in protecting the communications of the Northern Sea Route and the protection and defense of Northern Fleet garrisons. The drills will include countering imaginary terrorist groups, as well as how to block and destroy them. In addition to at sea exercises, a number of exercises will take place at coastal ranges in the Murmansk region.

Up to 30 ships and submarines from the Northern Fleet, along with 20 aircraft and 1,200 personnel, will be involved in the exercise. The ships participating include destroyer RFS Severomorsk (619), frigate RFS Admiral Flota Sovetskogo Soyuza Gorshkov (454) and landing ship RFS Ivan Gren (135).

More than 20 ships of the Black Sea Fleet had departed from Sevastopol and Novorossiysk for exercises in the Black Sea, the Press Service of the Southern Military district said in a Monday news release. Minesweepers RFS Ivan Golubets, RFS Ivan Antonov and RFS Valentin Pikul carried out mine clearance for corvettes RFS Suzdalets (071) and RFS Yeysk (054), and two corvettes carried out anti-submarine drills for combatting simultaneous sea and air attacks on them, according to two releases issued today. Frigates RFS Admiral Essen (490) and RFS Ladney (861) and corvettes RFS Grayvoron (600), RFS Ingushetia (630) and RFS Naberezhnye Chelny (953) carried out air defense exercises with Russian Air Force fighter aircraft from the Southern Military District.

Meanwhile, 20 ships of the Baltic Fleet had departed their home ports to carry out exercises in the Baltic Sea, the Press Service of the Western Military District said in a Monday news release.

A separate Monday release disclosed the departure from Baltiysk of corvettes RFS Stoykiy (545) and RFS Soobrazitelny (531) for a long-range deployment that includes participation in the Russian Navy’s large scale exercise and ensuring the naval presence and display of the Russian flag in various regions of the world. It added that the ships had embarked anti-terrorist security detachments from the Baltic Fleet Marine Corps.

Over in the Arabian Sea, the Russian Pacific Fleet task group that includes cruiser RFS Varyag (011), destroyer RFS Admiral Tributs (564) and replenishment ship Boris Butoma, along with People’s Liberation Army Navy destroyer Urumqi (118) and replenishment ship Taihu (889) of the 39th Escort Task Force, carried out the joint Russian-Chinese anti-piracy exercise “Peaceful Sea-2022” on Monday. During the exercise, the Russian and Chinese ships practiced tactical maneuvering and screening, and carried out an operation to free Boris Butoma, which was acting as a seized vessel.

“The exercise further enriched the connotation of the comprehensive strategic partnership of coordination between China and Russia in the new era, accumulated useful experience for the two sides to jointly carry out anti-piracy missions, and improved the capabilities and level of the two militaries to jointly respond to maritime threats and maintain the safety of maritime strategic channels,” the Chinese Ministry of National Defense said in a news release.

The Russian Pacific Fleet Task Group is now heading to the Mediterranean Sea to join with landing ship tanks RFS Olenegorskiy Gornyak (012) and RFS Georgiy Pobedonosets (016), in addition to RFS Pyotr Morgunov (117) from the Northern Fleet and RFS Korolev (130), RFS Minsk (127), and RFS Kaliningrad (102) from the Baltic Fleet for an exercise.