This story has been updated to clarify that the Navy could award the Constellation-class frigate contract under a one-year continuing resolution.

The Navy is facing a $500 million shortfall for its Columbia-class ballistic missile submarine program if the government is forced to operate under a year-long continuing resolution, a service official told reporters on Tuesday.

The service’s fiscal management director on the chief of naval operations (N82) staff today forecasted a list of ramifications for the Navy – ranging from decreased aircraft and weapons procurement to not giving sailors a raise – if lawmakers pass a year-long CR for Fiscal Year 2022.

“On the industrial base, there’s no … sector that’s not going to be impacted. So if you’re in the ship construction business, you know, Columbia is going to receive a half a billion dollars less money,” Rear Adm. John Gumbleton, the Navy’s deputy assistant secretary for budget, said in a conference call with reporters.

The Columbia-class program – which will replace the Ohio-class nuclear ballistic missile submarines – has long been described as the Navy’s top acquisition priority and has little margin for error to start strategic deterrence patrols as the Ohio boats start to leave service.

“That’s our you know, what, number one priority program for the last several years and the margins are tight, and here we are, we’re going to fund it less a half a billion to plan. So yes, that has the very much potential to impact that schedule,” Gumbleton said. “Now we know that first boat’s going to deliver a few years out, so hopefully there’ll be an opportunity to make this up and hopefully we won’t have a year-long CR. But it’s already a stressed, low-margin program so that would not be positive.”

The Pentagon is operating under the second CR this fiscal year – which is keeping the government funded through Feb. 18. Under a CR, the Pentagon’s funding is limited to the prior fiscal year’s levels and it cannot spend money on new-start programs.

Gumbleton described a list of other consequences for the Navy should it have to operate under a year-long CR, including cuts to weapons programs for which the Navy planned to increase the quantity in FY 2022.

“Some additional new starts are the T-AGOS ship, our intent to buy three used sealift ships, an oiler and two Ship to Shore Connectors. So those are all examples of things that are not going to happen,” Gumbleton said.

“On the aviation front, we had intended to buy seven additional [Joint Strike Fighters] and six MQ-9 Predators for the Marine Corps and advance their force plan initiatives. These things are not going to happen in a year-long CR,” he added. “Then on the weapons front, it’s multiple weapons that have increased order quantity – whether we’re talking about JASSMs, Evolved Sea Sparrow, Naval Strike Missile, the Joint Air-Ground Missile – all these weapons systems that our industrial base was planning to buy or manufacture for us that we’re planning to have in our inventory, are not going to happen. So that’s just a quick rundown of industrial base issues that … in a year-long CR will be impacted.”

A Navy spokeswoman later told USNI News that the service could issue the FY 2022 contract for the Constellation-class frigate under a one-year CR, but there would be “a rate of operations issue” because the funding needed in FY 2022 is about $35 million more than the FY 2021 levels.

“However, we would need to request cost to complete in FY23 or possibly later in the event of a full year CR to buy back the additional $35M not part of FY22. This may cause schedule delays to this program,” said Lt. Katie Diener. 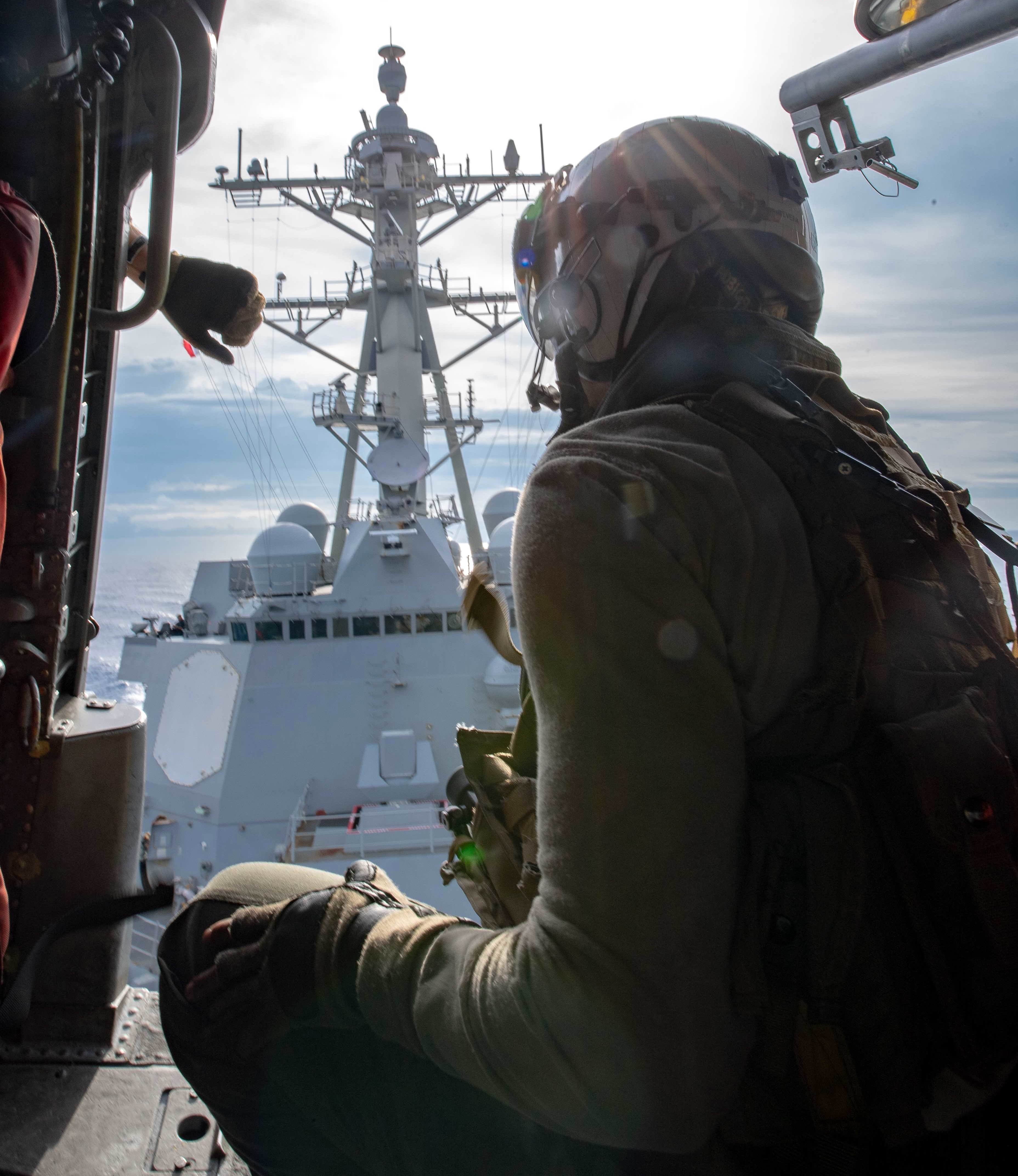 The Navy is also looking at a $2.5 billion shortfall in its operations and maintenance account because it’s limited to the FY 2021 levels, Gumbleton said, meaning that under a year-long CR, the service would not be able to perform maintenance availabilities on two aircraft carriers and five submarines. It would also have to cut flying hours for the Navy and Marine Corps.

“And so what does that mean? Where are we going to take risk? So We’re going to specifically not take risk in our forward-deployed forces right now. But because we’re already half-way – you know, we’re four-and-a-half months through the fiscal year and potentially we won’t know until six months – we are continuing to spend the money like we have it because we’ve been here before,” he said. “So if it does turn into a year-long CR, the dramatic impacts would be we would not do maintenance on five submarines and two aircraft carriers. And we would reduce the flying hour counts to all our pilots – Navy and Marine Corps – by 10 or 20 percent in the last quarter and a half of the fiscal year.”

Gumbleton said he’s been urging the fleet to operate as if the Department of the Navy is not under a continuing resolution, so the cuts would need to come from the maintenance side of the operations and maintenance account.

“I have directed our fleet and Fleet Marine Force to actually conduct your operations as if we are not going to be in a CR. We are not going to slow down. And so that’s why we have this dramatic impact on our operations and maintenance should we have that result come to fruition here sometime in April, for example. And so, therefore, our dramatic changes to absorb that $2.5 billion less value is we would have to not do those – work on those submarines, the five of them.”

As for the personnel account, Gumbleton said that under an extended CR the Navy has $1.5 billion less in FY 2022 for payroll, meaning it would need to slash the number of new sailors it recruits from the planned 31,000 down to 8,000. The service would also have to eliminate 37,000 permanent change of station moves and not issue the pay raises Congress passed in the FY 2022 policy bill.

“The ones we want to entice to stay in, we’re going to offer a bonus, but we won’t be able to do that here,” Gumbleton said of retention bonuses for sailors. “And so if you’re that second class petty officer, you’re coming up at the end of your enlistment and you thought you might be competitive for a reenlistment bonus, well that would not be the case.”

Under new-start programs for FY 2022, Gumbleton said the Navy has 10 research and development programs, ten procurement programs and 12 military construction projects it that could not commence under a CR.

The Navy’s research and development account is also looking at $2.5 billion less for FY 2022 compared to FY 2021, according to Gumbleton.

“And so the Navy and Marine Corps will be forced with a very hard decision should we have a year-long CR. That increased funding – which is [an] 11 percent increase from one year to the next – the dramatic rise in those programs was to pay for Conventional Prompt Strike, new design SSN, and some classified programs,” he said. “And so the Navy/Marine Corps would have to choose – do we stay true to our priorities that we want to invest in for the future fight to maintain our modernization efforts to maintain our competitive advantage over China – and/or what programs will we cut the balance at $2.5 billion?”

Lawmakers have until Feb. 18 to either pass the FY 2022 appropriations bills or a new continuing resolution.

House Armed Services Committee vice-chair Rep. Elaine Luria (D-Va.) recently said the budget negotiations for FY 2022 are “tied up in a very political fight of saying, ‘we need to maintain the spending levels of the last administration,’ i.e. we need to not put more in these social programs, but that’s locking in DOD at the point that they’re at, but doing that via a CR is disastrous.”

The Navy can send over a list of anomalies – or waivers – to Congress when it’s operating under a CR, but the service has been quiet the last few months as to whether it’s seeking any anomalies. Asked what anomalies the service is sending over, Gumbleton declined to detail the Navy’s request, but later said the service is “considering anomalies.”

“The last thing we want to do is actually show how we can actually live with a CR that lasts 12 months. We absolutely don’t want to do this and so to actually seek anomalies or workaround for a system that’s supposed to work so that we can, again, maintain our strategic rivalry with China, don’t break trust with our sailors and Marines, and not disrupt the industrial base, is incongruent,” he said.