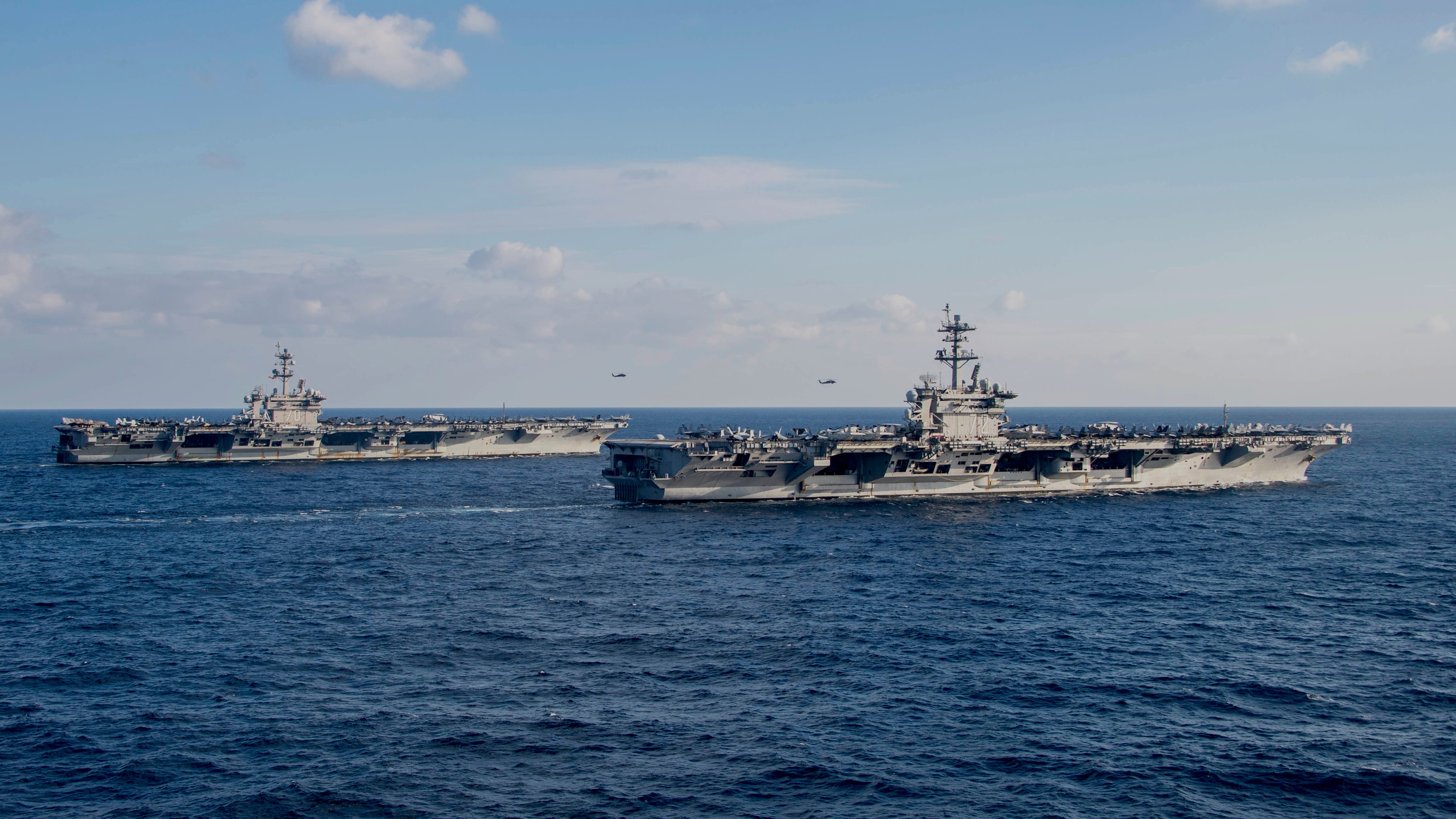 Throughout the last year there have been multiple incursions of Chinese aircraft in Taiwan’s ADIZ, heightening tensions between the both the U.S. and China and Taiwan and China.

“Our ability to rapidly aggregate and work collectively alongside CSG 3, highlights the U.S. Navy’s ability to deliver overwhelming maritime force, when called upon, to support a free and open Indo-Pacific region,” Rear Adm. Dan Martin, the commander of CSG 1, said in the Navy news release. “We are committed to ensuring the lawful use of the sea and free flow of commerce while deterring those who challenge the shared vision of a free and open Indo-Pacific now and into the long-term future.”

In a news release issued today, the JMSDF said the exercise took place in the vicinity of Oki Daito Island, an uninhabited island 315 kilometers, or about 196 miles, southeast of Okinawa. In December, the People’s Liberation Army Navy aircraft carrier Liaoning (16) conducted flight operations in the same area.

“The Self-Defense Fleet has been making efforts to deepen friendly relations and strengthen cooperation with the Pacific island nations by conducting goodwill visits and training exercises at ordinary times, with the aim of realizing a ‘free and open Indo-Pacific.’ In this mission, we will do our best to support the reconstruction of our friend, the Kingdom of Tonga, hoping for its early recovery and sustainable development,” Vice Adm. Hideki Yuasa, the commander of the Joint Task Force for International Disaster Relief Operations in Tonga, said in a JMSDF news release about the departure.

A great shot of #HMASAdelaide with three @AustralianArmy CH-47 helicopters on the flight deck. Adelaide is en route to Tonga to provide humanitarian supplies and assistance. #OpTongaAssist

In other developments, German Navy Chief Vice Adm. Kay-Achim Schönbach resigned on Saturday following a furor over his comments in India on Friday, when he downplayed Russian President Vladimir Putin’s actions over Ukraine.

“Is Russia really interested in … a small, tiny strip of Ukraine’s soil? No, this is nonsense,” Schönbach said during a session at the Manohar Parrikar Institute for Defence Studies and Analyses, which was uploaded to Youtube. The admiral added that “what he really wants is respect. And my God, giving someone respect is low cost, even no cost … so if I was asked, it is easy to even give him the respect he really demands, and probably also deserves.”

The German Navy Chief also remarked that “the Crimea peninsula is gone. It will never come back, this is a fact,” a statement that contradicts Western nations’ position that the annexation was unacceptable and that the territory should be returned.

His remarks came amid criticism of the German government for its unwillingness to supply Ukraine with weapons, while other NATO countries were doing so in an effort to deter Russia, which has massed troops along its border with Ukraine.

Schönbach announced his resignation on Saturday in a release stating: “I have just asked the Federal Minister of Defense to release me from my duties and duties as Inspector of the Navy with immediate effect. The thoughtless comments I made in India on security and military policy are increasingly weighing on my office. In order to prevent further damage from the German Navy, the Bundeswehr, but above all from the Federal Republic of Germany, I consider this step to be necessary. The Federal Minister accepted my request. The Commander of the Fleet and Deputy Inspector of the Navy, Rear Admiral Kaack, will lead the German Navy until a successor decision is made.”

Schönbach only recently took over as German Navy Chief in March of 2021.

Schönbach was in India in conjunction with the visit of German Navy Frigate FGS Bayern (F217), which arrived on Friday in Mumbai during the final leg of its seven-month deployment to the Indo-Pacific. Bayern departed today from Mumbai and conducted a passage exercise with Indian Navy destroyer INS Visakhapatnam (D66) as it left.