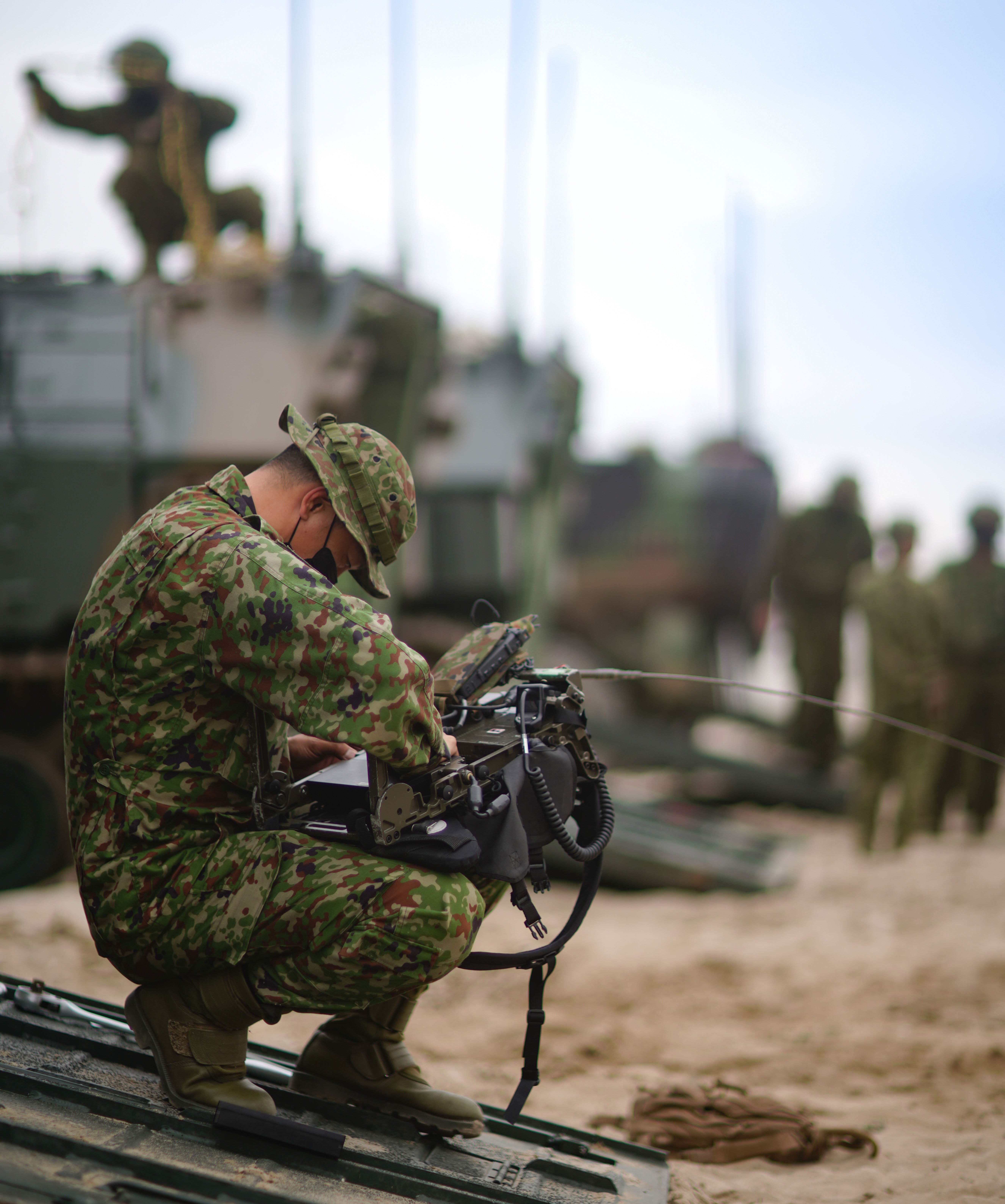 CAMP PENDLETON, Calif. – Smooth seas and an ebbing tide greeted Japanese and Marine Corps amphibious vehicle crews that zipped in and out of the Pacific last week, marking the first week of the annual exercise Iron Fist and a resumption of Marines’ waterborne operations.

The drill comes as the Marine Corps recently lifted restrictions on waterborne operations of their amphibious combat vehicles, the newest replacement for their older, legacy assault amphibious vehicles that it’s no longer allowing in the water. The drill ensures that crews can safely operate the tracked AAVs and wheeled ACVs while entering, exiting and operating in the ocean, important steps as the U.S.-Japan force practices combined amphibious operations over the next few weeks.

About 200 soldiers with the JGSDF’s 2nd Amphibious Rapid Deployment Regiment are training with I Marine Expeditionary Force and Amphibious Squadron 5 for the bilateral exercise that began in 2006. Last year’s planned event was canceled because of the COVID-19 pandemic. This year’s training force is slightly smaller than in past years’ exercises due to COVID-19 protocols.

In fact, the JGSDF’s sixth AAV didn’t join in the day’s ocean drills because of COVID, officials said.

The water training marked the first time both forces’ vehicles trained together.

Col. Kazuhiro Irie said Iron Fist provides unique opportunities for his soldiers to get familiar with operating on ship and ashore with the Marines and to practice live-fire and maneuver drills that are more limited than what they can do at home.

“It is very important to train our soldiers,” Irie, an airborne infantry officer who took command of Nagasaki-based 2nd ARDR in December, said through a translator. 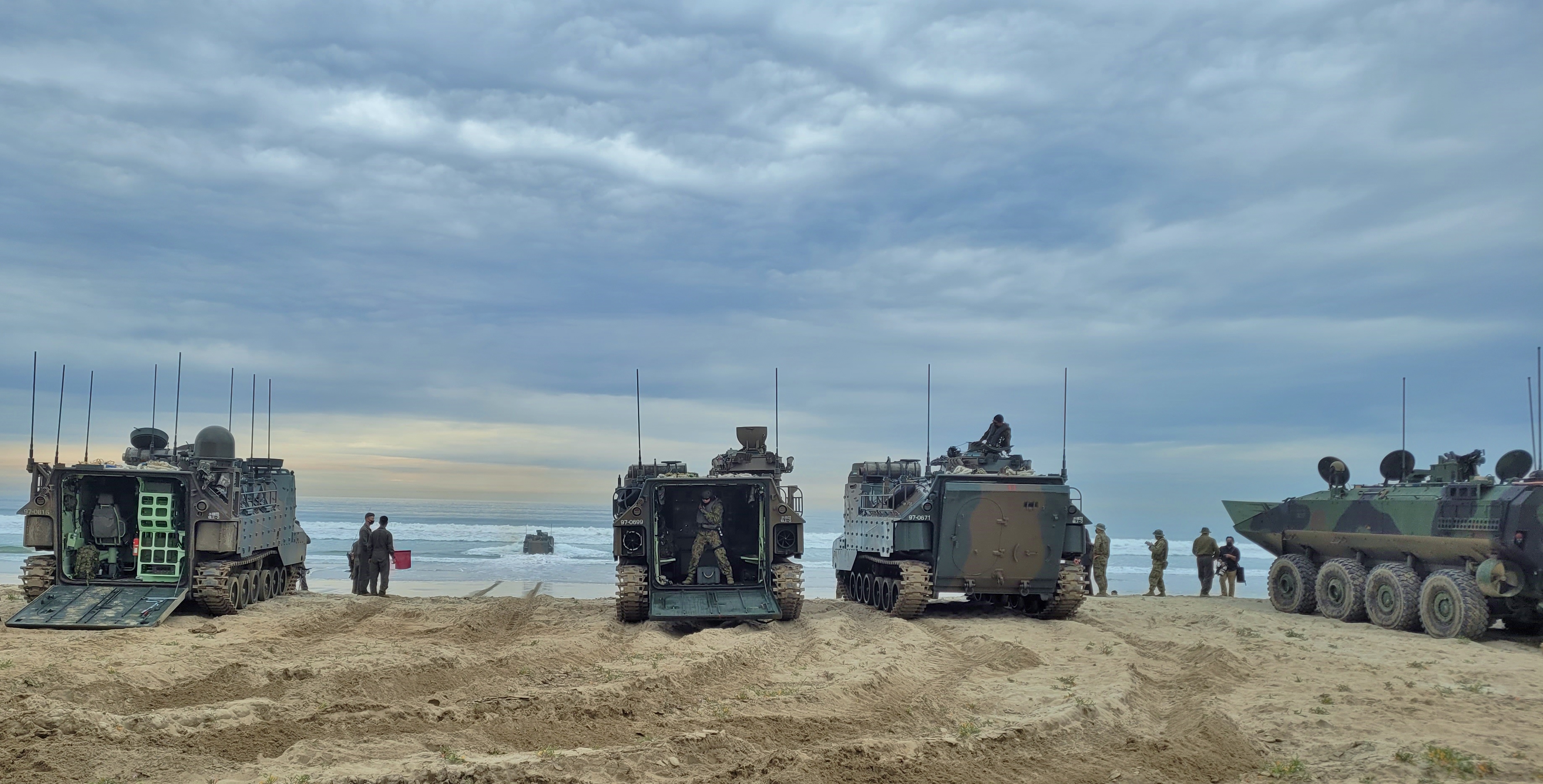 His goal for Iron Fist: Integrate and improve communications between his force with U.S. units that, ultimately, help strengthen the alliance between both nations.

“We would like the world to know that we are working together — Japan and the U.S. — during this month of training based on a real-world scenario,” Irie told USNI News. “That is a very important thing, that allied relationship” as well as “one-on-one” among commanders and the JGSDF soldiers and Marines at the small-unit level.

Training to conduct amphibious operations with infantry and mechanized forces effectively and safely under any threat conditions remains a critical, core capability for both the U.S. and Japan, officials say.

Col. Sean Dynan, a career infantry officer who commands the 15th Marine Expeditionary Unit that’s partnered with Japan’s 2nd ARDR for Iron Fist, watched Marines and soldiers milling by their vehicles on the beach as crews took turns barreling into the surf.

“This is an actual power — our ability to get ashore and aid and defend anywhere in the world. How great is that?” Dynan said of amphibious capabilities.

“And it’s not just combat,” he said. A humanitarian relief operation, like what followed the 2011 earthquake and tsunami that struck Japan, “is the more likely mission that we might get.”

Training at sea, with limits 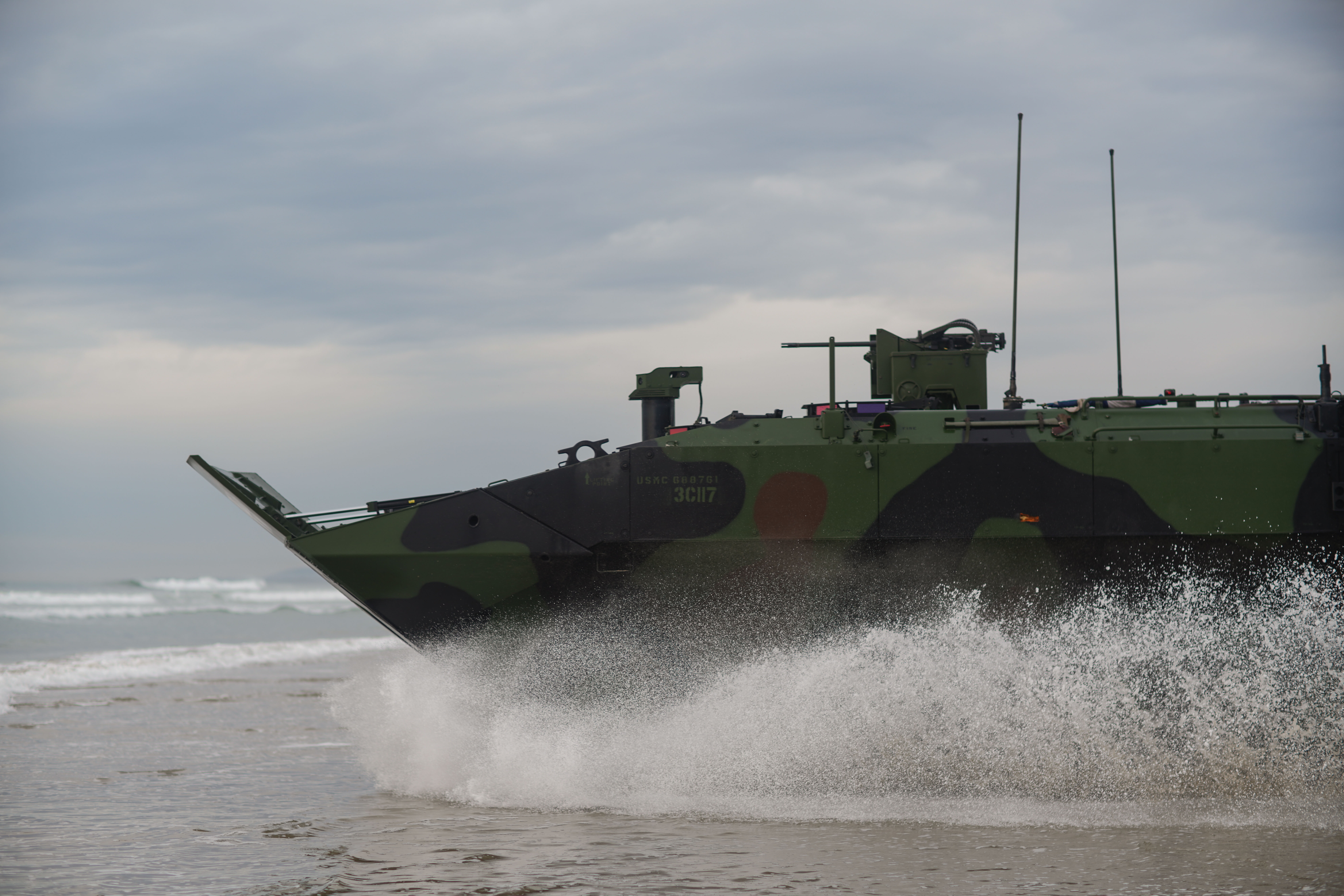 Japanese troops will join Marines and sailors for training with dock landing ship USS Harpers Ferry (LSD-49). But this year’s training is limited compared to previous exercises due to the Marine Corps’ restrictions in both AAV waterborne operations and in ship-to-shore and shore-to-ship amphibious training prompted by last year’s fatal AAV sinking off San Clemente Island.

Restrictions to ACV operations — most recently lifted — were prompted by problems with its towing mechanism that led to at least one ACV overturning in the surf.

Since the Marine Corps hasn’t yet resumed full amphibious operations with the Navy, there won’t be a combined amphibious assault from ship to the beach with the AAVs and ACVs that’s a major highlight of Iron Fist training. Infantrymen with 2nd Battalion, 4th Marines, training with the soldiers “are not qualified to ride in the back of the ACVs at this time,” said Maj. Justin Davis, operations officer for 3rd Amphibian Assault Battalion at Camp Pendleton, but those Marines will go through a water package with ACVs later in February.

“There are very deliberate safety measures” in place for both ACV crew members and embarked Marines, he said, “but that training isn’t complete at this time.” The Marines’ ACVs also are operating without embarked troops during Iron Fist.

While a prerequisite to resume waterborne ACV operations, the return-to-water drill also “is giving the Japanese (AAVs) the ability to assess their performance as well,” Davis said. Their AAV crews had operated their vehicles in the base’s Del Mar boat basin days earlier, and “we’ll move on to more advanced training in the coming weeks.”

At the beach, 3rd AA Battalion Marines tossed sand-filled plastic bottles into the surf to do the timing calculations for their SUROBs, or surf observation reports that provide the go/no-go data for the platoon to launch to or from the shore.

“That’s a process that we do every four hours, or if conditions visually change,” Davis said. The Japanese AAV crews “do a very similar process to what we do. They were doing it hand-in-hand (with the Marines), and the Japanese felt they were within the comfortable position to operate their vehicles.”

“Everything that we do — from our surf observation reports to pre-operation checklists to our splash team checklists — is being done in a joint way with our Japanese partners,” he said. The bilateral partnership “is extremely important,” he added. “The Japanese are one of our greatest strategic partners within the Pacific Rim, so there’s no price we can put into this training here.” 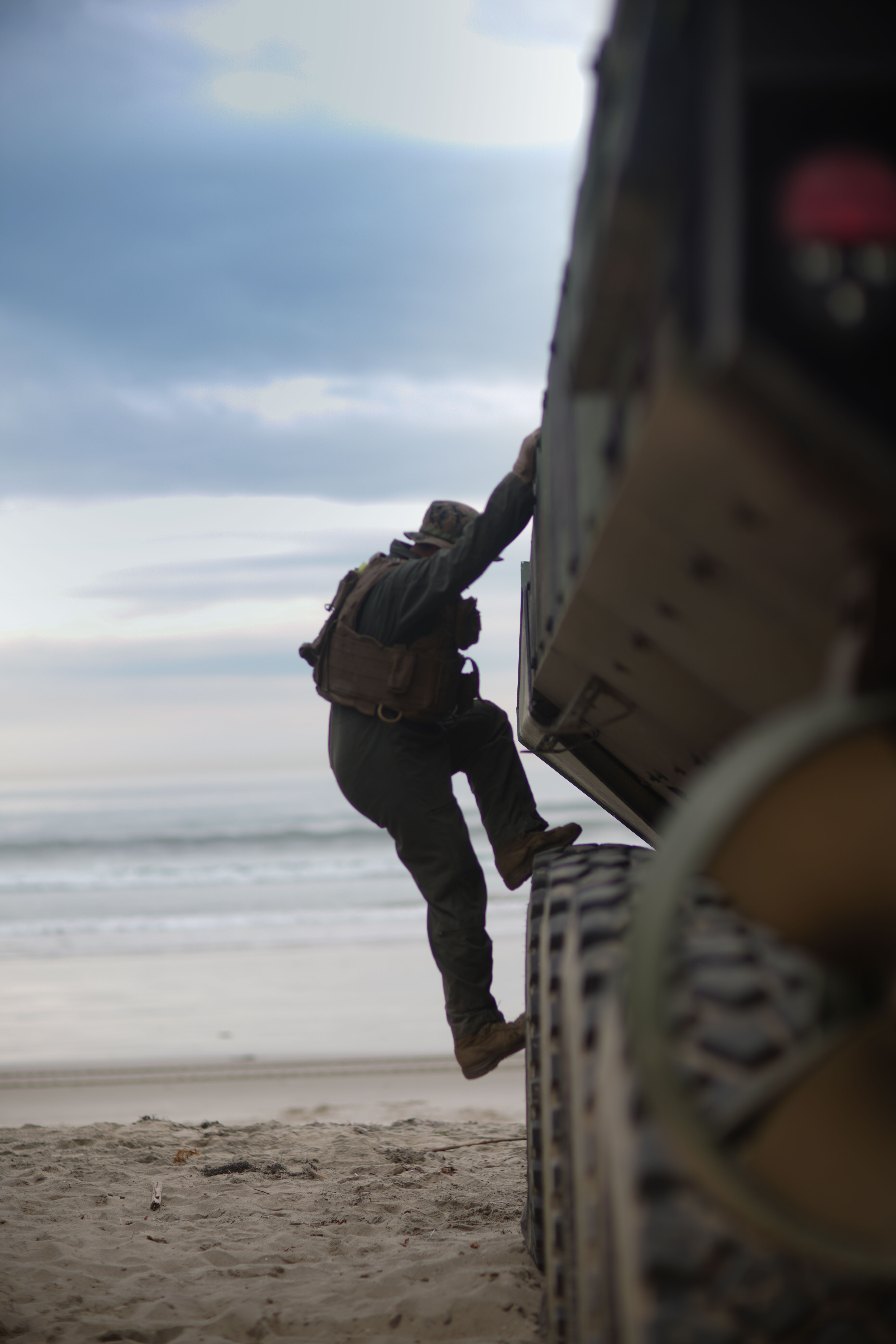 Both forces are getting practice at towing their amphibious vehicles at sea, a core skill for waterborne operations that’s necessary if a vehicle becomes inoperable.

The Marine Corps had pulled its ACVs from the water in late August because of “multiple failures” of its towing ropes, Davis said. In one case, one of the two ropes used for towing got loose from one ACV in the surf zone. Marines tried to re-hook it, he said, but break waves turned the vehicle parallel to the surf, and it rolled over on its port side. It took more than three hours to get that ACV upright and ashore.

A root-cause analysis done from September to December 2021 identified faults in the rope used to tow the vehicles, Davis said. Working with vendors, the service found and fielded a tow rope that has a higher tensile strength and elasticity and has guards to prevent fraying. The rope was tested to ensure it worked with the ACV’s sea tow quick-release mechanism, and follow-on testing done in early January showed it functioned well.

“The feedback we’ve had from our operators this week has been all positive, and we’ve had no failures thus far,” he said.

The 3rd AA Battalion Marines and Japanese crews practiced towing procedures, going a few hundred yards off the surf zone to recover a vehicle dead in the water using towing ropes – Japanese AAV crews use 50-foot ropes while ACV crews have 60 to 65-foot ropes. Key to a safe tow is keeping the rope tight with good speed and the vehicle perpendicular to the surf and not drifting off sideways, Davis said.

“The most dangerous point of what we do is right here in the surf zone,” he noted. “If there’s a large littoral current or a north-south current here, that can make it challenging.”

Davis noted the ACVs are loaded with multiple redundant systems and sensors compared to the older AAVs. That includes include bilge pumps, cameras, emergency egress lighting system and other systems designed for safe operations as well as sensors that track and warn the crew about water coming into the vehicle.

“Underneath the deckplates that Marines have their feet on, there’s all kinds of sensors that will tell the Marines if there’s water intrusion in the bottom of the vehicle,” he said. “You’ve got a lot more fail-safes” than the older vehicles.

Delayed evacuation of embarked troops as water rose to chest-high level is among the causes cited in the investigation into the fatal 2020 sinking that led to the deaths of eight Marines and one Navy hospital corpsman. 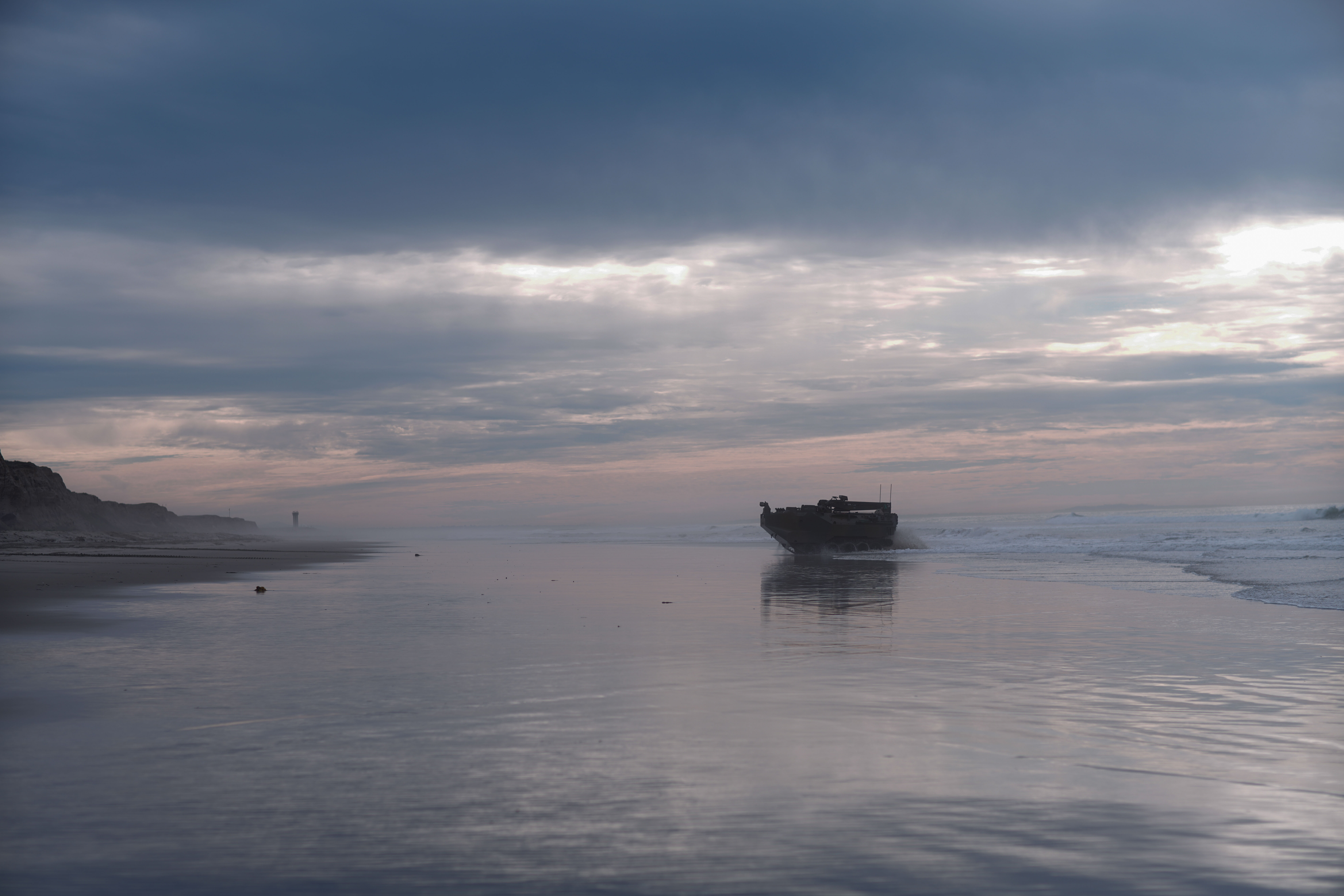 For Iron Fist, the Nagasaki, Japan-based 2nd ARDR shipped over six AAVs, along with combat rubber-raiding craft and ground vehicles and equipment. The six-week bilateral training will include combined mortar training with 2/4 at the Marines’ desert combat training center at Twentynine Palms, Calif., officials said.

The 2nd ARDR soldiers and 15th MEU Marines who had flown into the mock town via MV-22 Ospreys several days earlier last week worked on their urban warfare skills at Camp Pendleton’s Kilo-2 combat town last Thursday. Japanese soldiers and Marine infantry squads with Golf Company, 2/4 paired up to practice urban attack, moving against an opposing force along one of three training lanes set up by evaluators.

The walk-crawl-run approach to training comes in handy as both forces get familiar with each other’s standard procedures, weapons systems, coordination or operations. That includes everyone knowing the right words and proper language for things such as “cease fire.”

It’s particularly important in planning and in after-action debriefs where they review “things they can improve on and things they do well,” Lt. Col. Jared Reddinger, 2/4’s battalion commander, told USNI News. “It’s kind of a collective effort to get everyone better at this.”

“The Japanese have a lot of skills and things we may not have,” Reddinger said, “so any opportunity to get with a force that may have a different way of doing things that might be effective, we’re going to try to take those lessons on and implement in our training. If it makes sense, we’re going to do it.”

This year, some JGSDF soldiers are training at Expeditionary Warfare Training Group-Pacific in Coronado, Calif., to prepare them to go ashore from Harpers Ferry in their CRRCs for the final amphibious assault planned for early February at Camp Pendleton’s Red Beach. They will join Marines arriving via MV-22 Osprey tiltrotors and follow-on forces arriving by Navy air-cushioned landing craft (LCAC), and both forces will continue inland toward separate urban warfare objectives along with combined-arms support. As the exercise scenario unfolds, Dynan said, “we’ll combine and we’ll take the final objective together.”