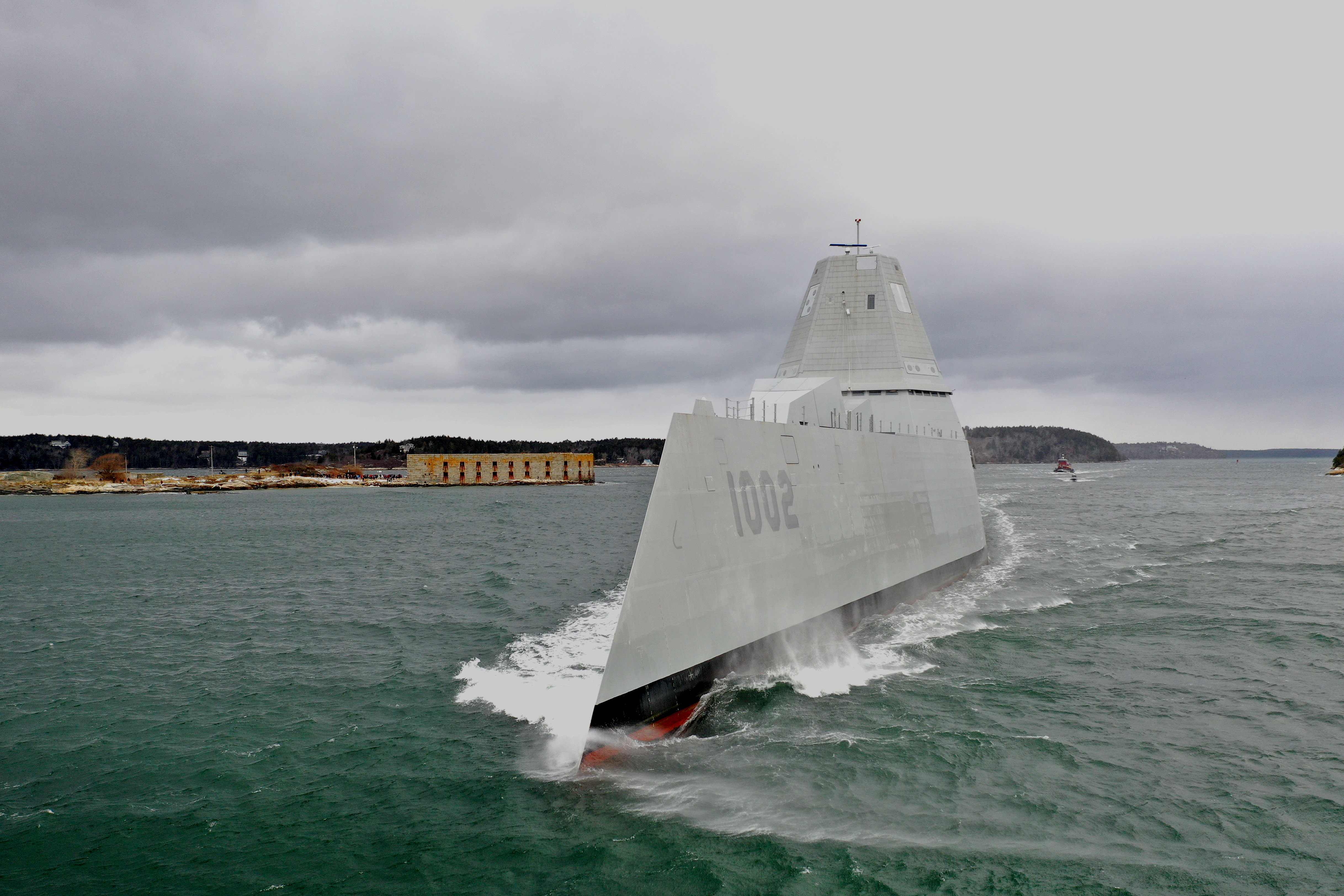 Lyndon B. Johnson (DDG-1002) passed near Fort Popham after traveling down the Kennebec River to the Atlantic Ocean from Bath Iron Works on Jan. 12, 2022. GD Bath Iron Works Photo

The third and final Zumwalt-class destroyer pulled away from the pier at General Dynamic Bath Iron Work, Maine, on Wednesday.

Lyndon B. Johnson (DDG-1002) departed the shipyard and is in the Atlantic after traveling down the Kennebec River after completing the first of a two-part delivery scheme for the Zumwalt-class.

“Last November, the Navy formally accepted completion of production and test activity from BIW for DDG 1002,” according to a statement from the yard.
“The Navy’s acceptance of Hull, Mechanical and Electrical (HM&E) completion followed extensive tests, trials and demonstrations of the ship’s systems both at the pier and during sea trials last summer.”

Johnson is now bound for Ingalls Shipbuilding in Pascagoula, Miss., for the combat system activation that will finalize the delivery of the ships radar and weapon systems.

The other ships in the class – USS Zumwalt (DDG-1000) and USS Michael Monsoor (DDG-1001) – transited from Maine to San Diego, Calif., to complete the combat system activation.

The service will hold off on accepting delivery of Johnson until the combat system is fully installed and tested.

“The program manager stated that this new approach may result in additional schedule delays; however, it will free up valuable pier space in Naval Base San Diego and enable the Navy to avoid moving the crew onboard DDG-1002 until it is ready to operate,” reads a June Government Accountability Office report.
“The program manager identified the change as a response to lessons learned from DDG-1000 and 1001—specifically, that completing combat system activation and final construction is complicated by onboard crew, in part, because access to spaces is more constrained.”

Delivery of the ship to the service is expected in 2024, USNI News reported.

The Zumwalt-class will be the Navy’s first platform to field hypersonic weapons by replacing one or both of the 155mm Advanced Gun System with larger cells to accommodate the missiles by 2025, USNI News has previously reported. It’s unclear which Zumwalt will first field the weapons.

For Bath, the departure of Johnson will free up space in the Maine yard for the workforce to focus on the remaining Arleigh Burke DDG-51 guided-missile destroyers under construction.
The three 16,000-ton ships have stretched the capacity of the shipyard and resulted in delays in ship deliveries over the last several years.