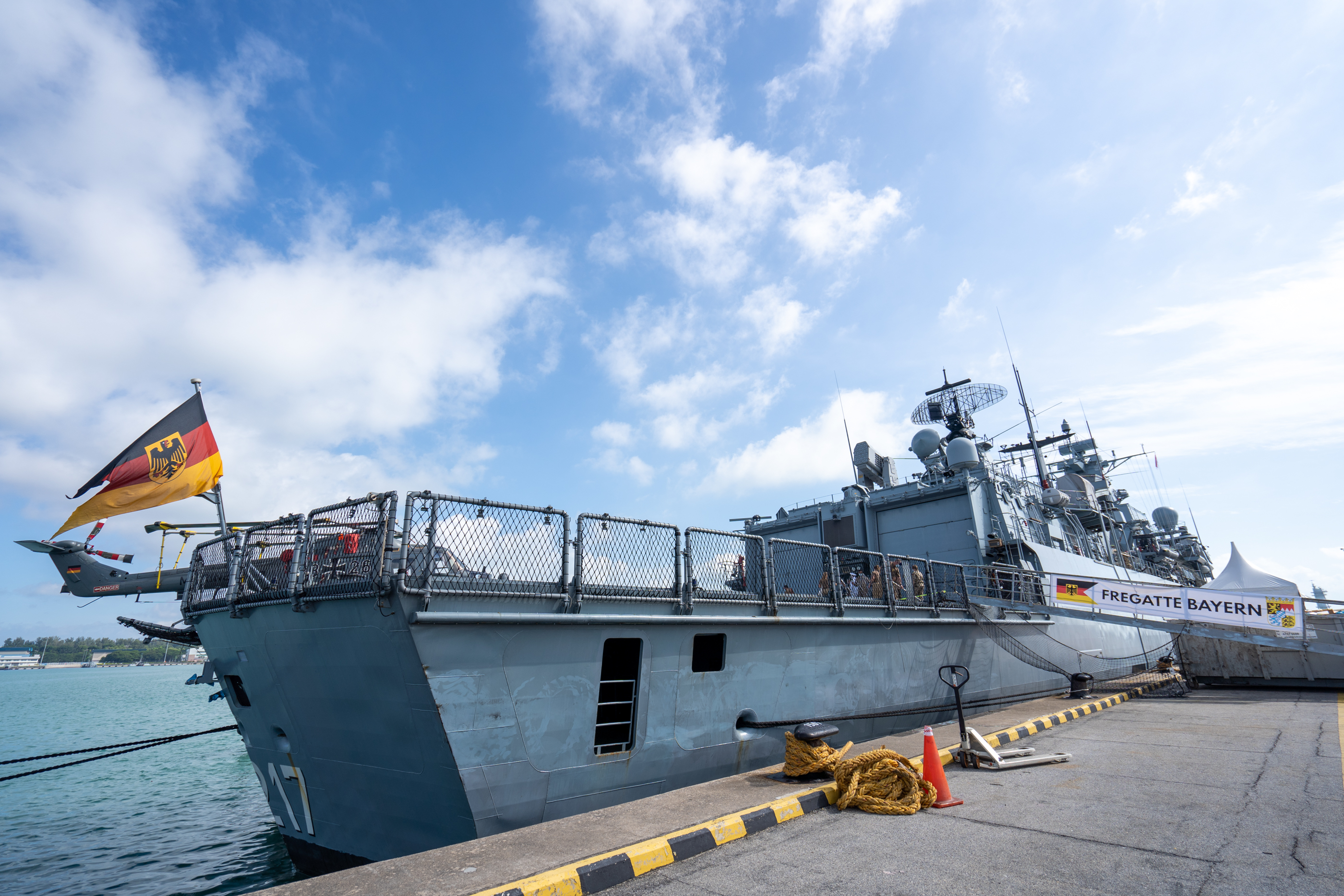 During his speech at the International Institute of Strategic Studies’ 42nd Fullerton Lecture series in Singapore, Schönbach said Bayern’s deployment was to enable the German Navy to familiarize itself with the region, given its last presence here was 19 years ago. He said that, subject to the final decision of the German government, he intends to have German maritime assets deploy to the region on a regular basis, then potentially also in an international format together with European and Transatlantic partner navies.

His intention is to send ships into the region again in 2023.

“This time was just a frigate, as a teaser to prepare for the next time, where there will be two,” the German Navy Chief said.

The 2023 deployment is slated to include a frigate accompanied by an auxiliary ship to support the frigate. Schönbach also said that with the newer F125 Baden-Württemberg-class frigates, the deployment scope could be expanded further, as the ships are capable of remaining in the region for up to two years with a crew rotation in place. The German Navy was in discussions with partners in the region – particularly Singapore along with potentially Japan and South Korea – for the establishment of a non-permanent logistics support hub to facilitate the deployments, Schönbach said.

He noted that while the German Navy would not deploy to the Indo-Pacific in 2022, German Chief of Defence Gen. Eberhard Zorn has announced that German Air Force units, as well as cyber defense units, will deploy to the region in 2022. The Luftwaffe is scheduled to deploy six Eurofighters, three Airbus A330 tankers and three A400M transport aircraft for the Royal Australian Air Force’s Pitch Black multinational air combat exercise, scheduled for Sept. 5 through Sept. 23, 2022 in Australia, though Germany is also said to be talking to other countries in the Indo-Pacific about bilateral exercises next year.

Schönbach said that Bayern’s deployment was in line with Germany’s Indo-Pacific policy guidelines that has Germany committed to step up its security and defense engagement in the region.

“Germany is committed to strengthening the rules-based international order in the Indo-Pacific region to ensure that it remains a place of inclusive cooperation. Germany advocates open shipping routes, open markets and free trade, a level playing field while at the same time promoting digitalization, connectivity and human rights,” he said, adding that the deployment of Bayern is intended to underpin the security aspect of Germany’s commitment in the Indo-Pacific. 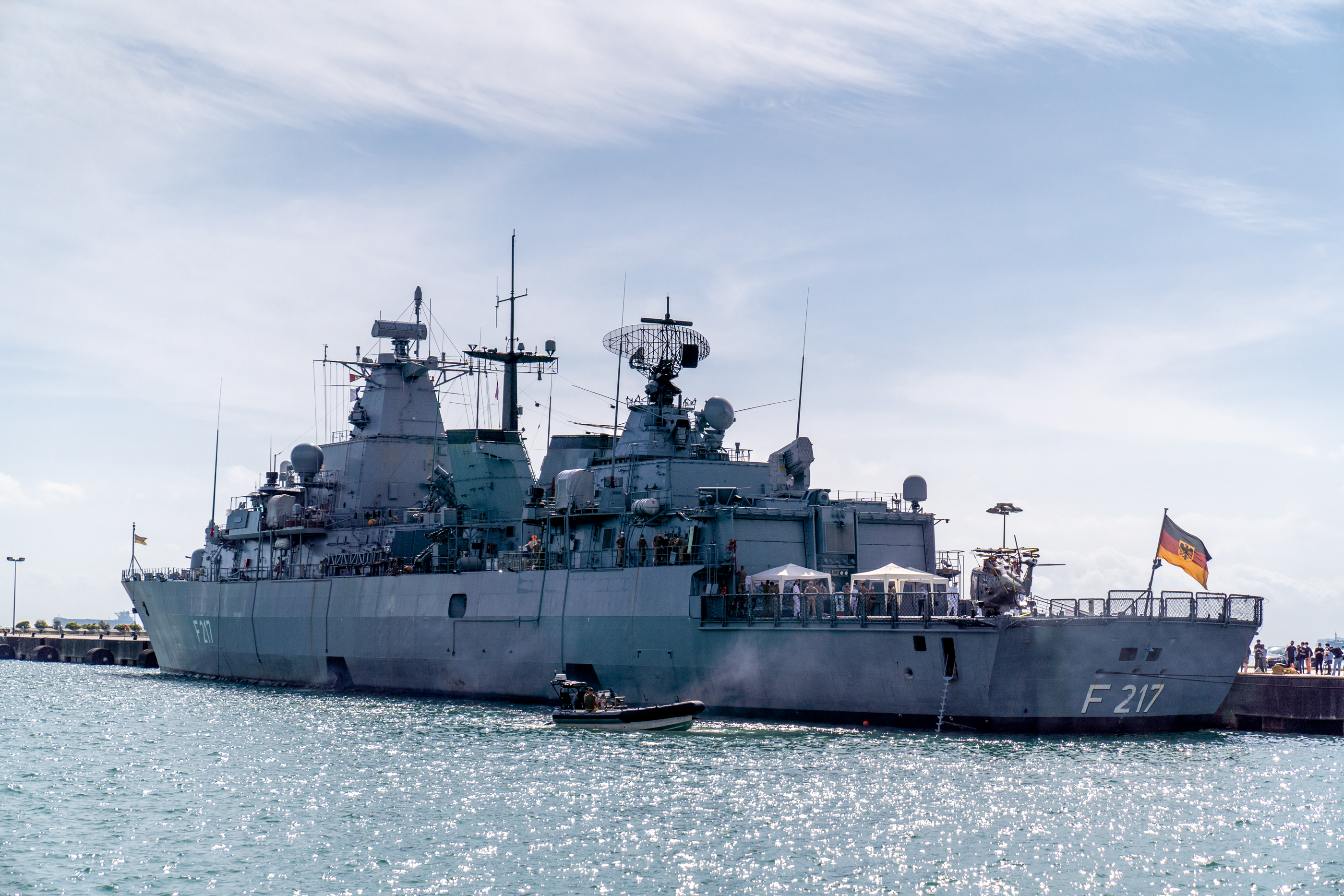 The German Navy Chief said that while Bayern’s independent deployment with a predominantly bilateral format for its activities may appear to be a contradiction of the German government’s emphasis on multilateralism, it was more beneficial to carry out a bilateral approach, given this was the first deployment.

“I, too, thought long and hard beforehand whether it would be advantageous to sail together with our American, British and/or French partners, integrated into an international naval task group,” he said. “In hindsight I am convinced that it has been a good decision to conduct most of the visits in a bilateral format, in particular as this is the first deployment in this context. By doing so, we have been able to intensify the dialogue with our partners to the benefit of all parties involved.”

Schönbach said that while the integration of a German Navy ship into a U.S., United Kingdom or French carrier task group would make sense both on a practical and logistical basis, doing so would depend on feedback from Germany’s regional partners about Bayern’s deployment. As to whether they preferred Germany to conduct its naval engagement bilaterally or as part of a multilateral group, he said: “We don’t want to be here to demonstrate in a group with others or bringing in a European or NATO problem to this region.”

Earlier today, Schönbach and German Ambassador Norbert Riedel formally welcomed Bayern at Changi Naval Base in Singapore. The ship arrived on Monday. Prior to its arrival in Singapore, Bayern’s previous activities included conducting an exercise with Littoral Combat Ships USS Jackson (LCS-6) and USS Tulsa (LCS-16) in the Philippine Sea in October.

In November, the frigate participated in the Japan Maritime Self-Defense Force’s ANNUALEX exercise, which also included participation from the Royal Australian Navy, the Royal Canadian Navy and the U.S. Navy. Bayern also conducted maritime surveillance and monitoring operations in support of the United Nations Security Council sanctions on North Korea last month. While voyaging to Singapore from its last port call in Busan, South Korea, Bayern was replenished by USNS Yukon (T-AO-202).

The ship will now remain in Singapore until January 2022, when it will leave for Ho Chi Minh City, Vietnam for its next port call.