The budget for the first three Sejong Daewang-class (KDX-III) destroyers was slated at $1.1 billion per
ship. Its large missile inventory is designed to ensure that the ship has plenty of opportunity to
destroy missile attacks on South Korea from the North. US Navy Photo

This post has been updated with a revised status on the CVX program.

The Republic of Korea Navy is no longer solely focused on the threat from its northern neighbor, but is embarking on an expansion to build a fully-fledged blue water fleet.

Supported by its two main naval shipbuilders – Hyundai Heavy Industries (HHI) based in Ulsan and Daewoo Shipbuilding and Mechanical Engineering (DSME) based in Okpo – the South Korean Navy is in the process of building up its surface fleet and increasing the capability of its submarines to provide more offensive firepower and conduct wider regional engagements.

This process is moving at a rapid pace. Even the last few months have seen a huge amount of activity in the surface and sub-surface sector. Most recently, in November, HHI launched the seventh of an expected eight new Daegu-class (FFX-II) frigates. To be named ROKS Cheonan, in memory of the corvette sunk in 2010, it will be delivered to the RoKN in 2023.

Also in November, HHI was awarded a KW636.3 billion, or $533 million, contract for the second of three new Batch 2 Sejong Daewang-class (KDX-III) destroyers expected to be delivered in 2026. In October, the company had already completed a keel-laying ceremony for the first Batch 2 KDX-III destroyer, with a launch expected in late 2022 and delivery in late 2024. Also in October, HHI and Korean Aerospace Industries (KAI) signed a Memorandum of Understanding (MoU) to cooperate on the design and development of a new 30,000-ton light aircraft carrier (CVX) for the RoKN – its first such platform.

Independent defense researcher Professor Kim Jae Yeop told USNI News that the RoKN’s long-held ambition to become an ocean-going navy “is based on the belief that the country’s security challenge will not be limited to existing threats from the North in the longer-term.” He said that this view is strengthened considering South Korea’s geopolitical position, surrounded by major powers like China and Japan.

South Korea’s new Mid-Term Defence Plan (MTDP) 2021-2025, published in late 2020, reinforced this change in direction toward more expeditionary operations. It increased the defense budget by 6.5 percent, providing some $235 billion over five years with about one-third (KW100 trillion) for the procurement of new equipment.

Kim said that since 2010, these vessels have enabled the RoKN to establish the 7th Maritime Task Flotilla “as its first naval unit for ocean-going missions, like the protection of the sea lines of communication” and for participation in multinational security operations such as counter-piracy in the Gulf of Aden since 2009. 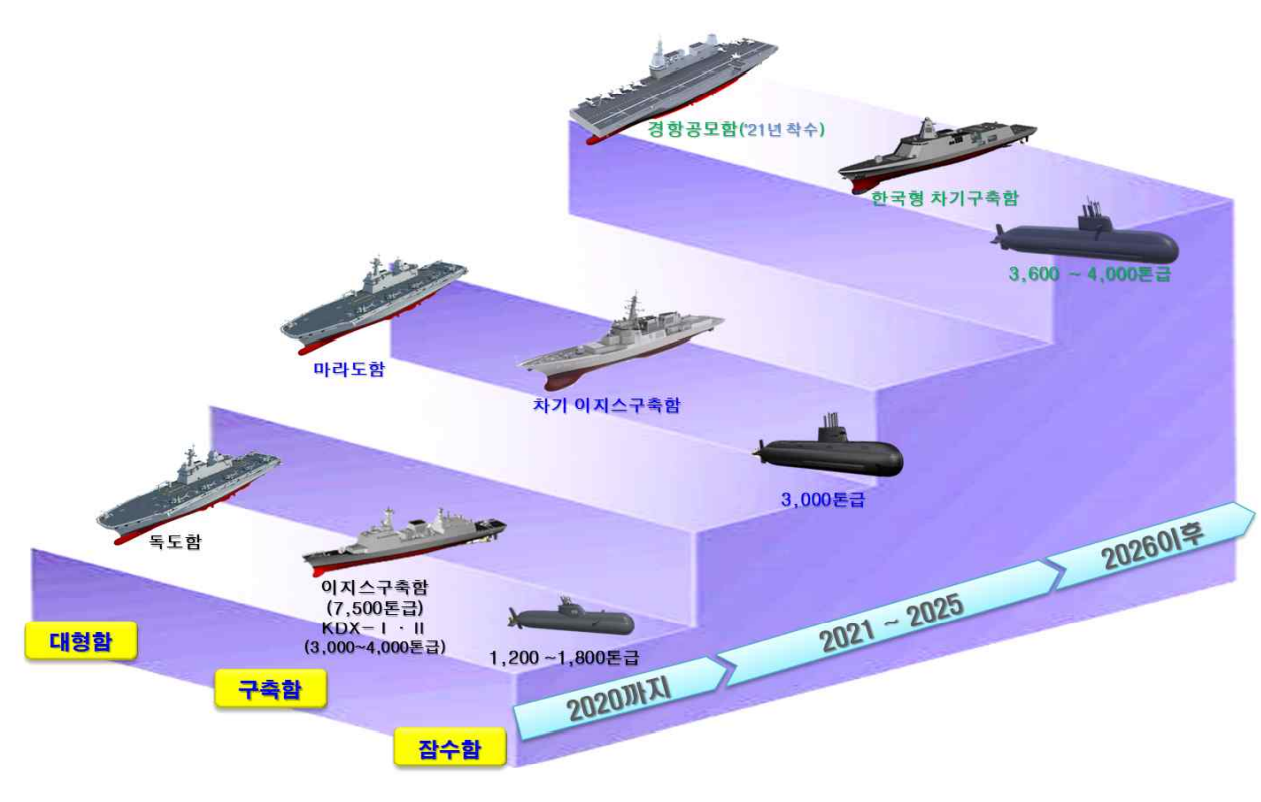 Plans for naval construction under the latest MTDP. The image shows the progression of the RoKN’s
SSK, surface fleet and amphibious/carrier fleet over the next decade. MTDP Image

“Eventually, the ROKN plans to form a genuinely ocean-going surface fleet from early 2030s, consisting of three flotillas, something like Fleet Escort Force of Japanese Maritime Self-Defense Forces; along with KDX-II, KDX-III destroyers and other new ships in the future,” Kim added.

The KDX-III destroyers are an important part of this expansion. The first three Batch 1 ships at 166 meters long and displacing over 10,000 tons are fitted with the Aegis Combat Management System Baseline 7, AN/SPY-1D(V) multi-function radar and three vertical launch systems (VLS) offering 128 missile cells that can fire the SM-2, Hyunmoo III cruise missiles or KASROC anti-submarine rockets. These were delivered from 2008 to 2012 and are the most sophisticated ships in the fleet, providing a core strategic ocean-going capability with its powerful anti-air warfare and land-attack systems.

The second batch of KDX-III ships mentioned above will give the RoKN six ships of this class by the late 2020s. They will be 170 meters long and displace about 8,100 tons. Kim said that these new ships will be capable of sea-based ballistic missile defense, with plans to acquire the SM-3 or SM-6 interceptors and Aegis CMS Baseline 9.

“This will contribute to realize a multi-layered missile defense capabilities at [the] Korean Peninsula; along with existing land-based interceptors of both Korean armed forces and U.S. troops in Korea, like Patriot [surface-to-air missile] and [Terminal High Altitude Area Defense system],” he added.
Furthermore, the RoKN plans to acquire another six destroyers known as the KDDX or KDX-IV from the mid-2020s. Slated to be about 6,000 to 8,000 tons, these will provide a mid-sized destroyer capability in between the 10,000-ton KDX-III and the older 4,200-ton KDX-II workhorse. These extra ships will be a smaller version of the KDX-III and add a critical mass to the fleet during times of maritime conflict and improve air defense capabilities with multifunction radar.

Three older 3,800-ton 1990s-vintage Gwanggaeto Daewang (KDX-I) destroyers are also going through a mid-life upgrade, with the second of three ships completing the refit and getting re-delivered to the RoKN in October. The KDX-I were the RoKN’s first attempt at building ocean-going warships, but with the introduction of the successor classes, Kim said these vessels will be relegated to coastal defense until newer frigates – the Ulsan-class (FFX-III) and FFX-IV – are introduced after the completion of the Daegu-class frigate project.

The 2,800-ton Daegu-class and its preceding 2,300-ton Incheon-class (FFX-I) frigate programs have been key in building up the RoKN’s anti-submarine warfare and anti-air warfare capabilities. The earlier 1,200-ton Pohang-class and 2,000-ton Ulsan-class corvettes were built in the 1980s for anti-surface operations against the small combatants of North Korea, but they were unsuitable for other missions. Kim said their obsolescence was highlighted during the sinking of corvette ROKS Cheonan (PCC-772) in March 2010, after which the Incheon- and Daegu-class were introduced and fitted with improved propulsion and ASW and AAW systems.

He said the FFX-III and FFX-IV will “seek more future-orientated capabilities” from the mid-2020s, employing similar systems to the KDDX such as multi-function radar and integrated masts. The latter class could potentially be developed from the early 2030s as a “drone mothership” that can conduct “cooperative missions with unmanned systems on the surface, underwater and in the air domain, similar to the Republic of Singapore Navy’s concept of a Multi-Role Combat Vessel (MRCV),” Kim added. 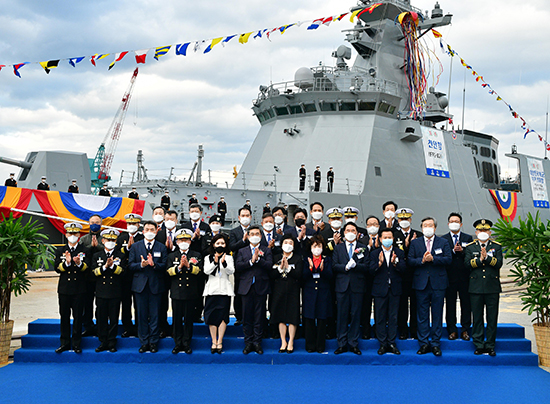 The Daegu-class (FFX-2) are also known as the Batch 2 Incheon-class (FFX-I) as they followed on from
the earlier ships and have a similar size and displacement. These will form the core of an expected
future fleet of 22 to 24 frigates. HHI photo

The RoKN will need all the ships it can get by the early 2030s, with the introduction of the new 30,000-ton light aircraft carrier. It will require both surface and underwater escorts with the endurance to support operations far from South Korean territory and the capability to protect such an important asset. Despite initial skepticism about whether CVX was a priority, South Korea’s National Assembly has passed a $6.1 billion budget for the CVX programme reversing earlier planned cuts. DAPA is expected to begin design work in 2022 with delivery of the ship slated for 2033.

With the program now underway, then the nine new 3,000-ton KSS-III SSKs – a third batch is also expected – will be a major asset for forward protection, as these will be the first fitted with lithium-ion batteries offering additional endurance and speed. The Dosan Ahn Chang Ho-class is a step up from the earlier nine 1,200-ton Chang Bogo-class (KSS-I) and nine 1,800-ton KSS-II SSKs, which were based on the German Type 209 and Type 214 designs, but the KSS-IIIs are indigenously designed.

“The most noteworthy character of KSS-3 is its capability to carry six submarine-launched ballistic missiles (SLBM), ranging 500km, by vertical-launch system (VLS); which was firstly tested on September,” Kim said. “Batch-2/3 of KSS-3 are expected to carry more SLBMs, reportedly up to ten, with longer striking range; thanks to the decision of Seoul to scrap its nearly 40-year-old missile policy guideline, which restricted the range of locally-developed ballistic missile below 800 kilometers,” he said.

This means that the KSS-3 will give South Korea an independent non-nuclear strategic deep strike deterrent against both Pyongyang and other countries.