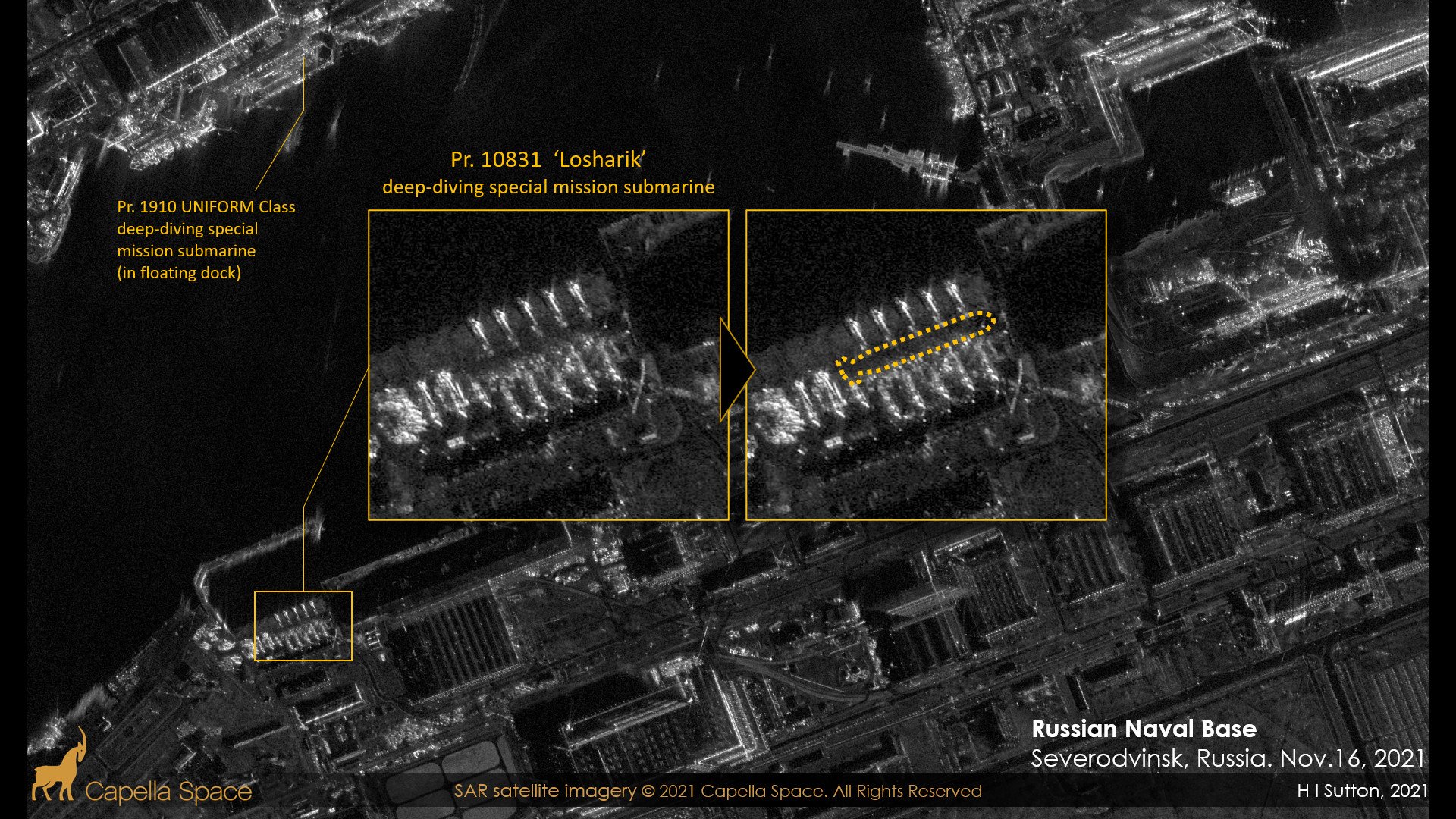 Tensions between Washington and Moscow are rising with a marked increase in competition in the undersea domain, as Russia continues to invest in a fleet of specialized submarines.

Russia is the only country with a fleet of special mission subs for seabed warfare and espionage and is expanding the capability. Other countries, like the U.S., also work well in this arena and have specialist capabilities, but these capabilities reside on multi-mission platforms.

Russia’s fleet includes two massive submarine motherships that each carry one or two deep-diving submersibles. These can be employed for covert seabed missions, including wreck plundering. The largest of these is BS-64, a stretched DELTA-IV-class submarine. This is one of the largest submarines in the world – bigger than the U.S. Navy’s Ohio-class nuclear ballistic nuclear submarine. It will be joined by an even larger mothership, Belgorod, which conducted sea trials in June. This is second only to the 30,000-ton Typhoon class in terms of size. 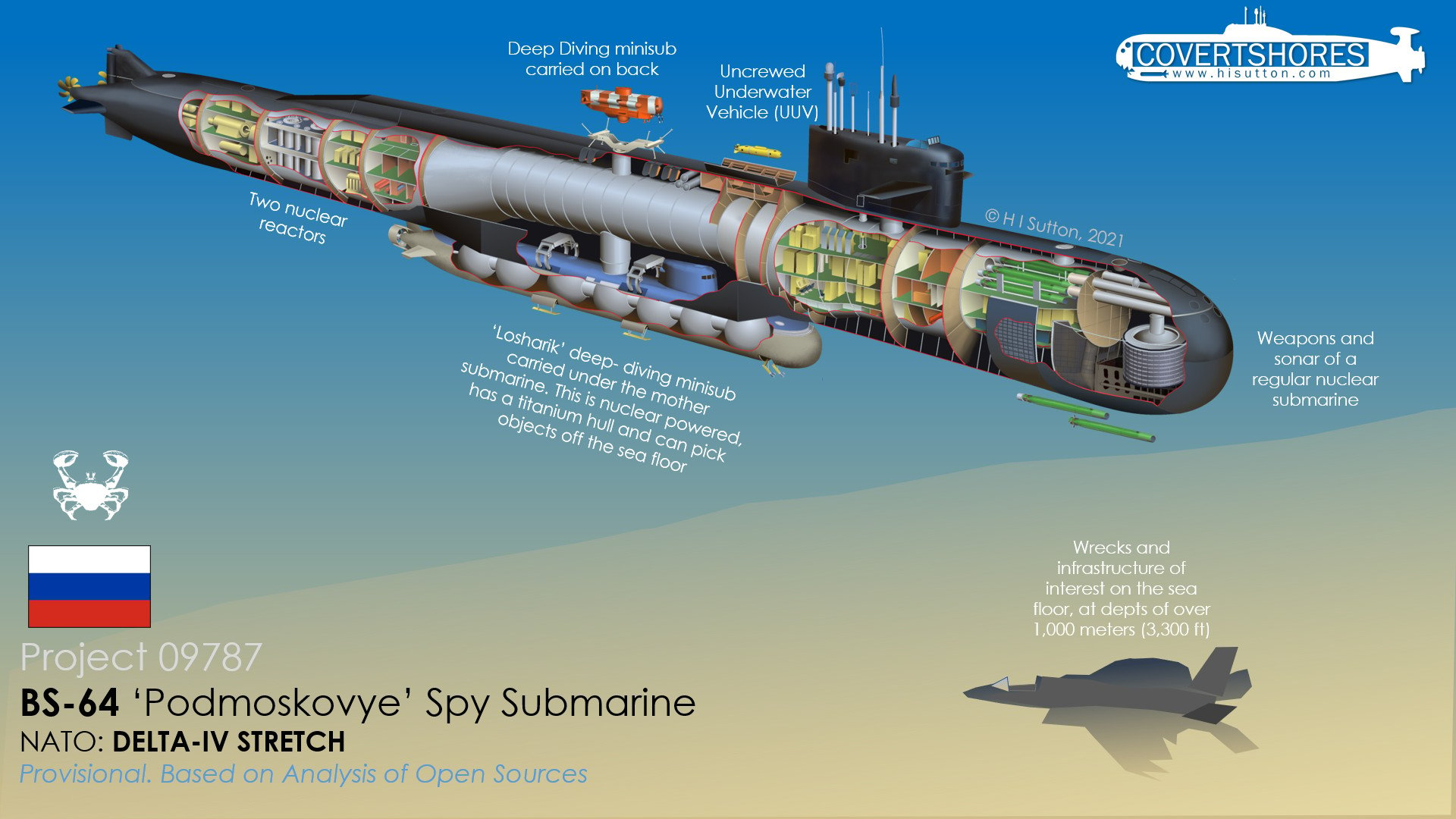 The size and complexity of the specialized submarine force speaks to the importance and investment that Russia places on these capabilities. The deep-diving submersibles are operated on several nuclear-powered vessels. Three of them, two Paltus-class boats, and the better known Losharik, are compatible with BS-64.

These submarines are operated for the Main Directorate of Deep Sea Research. This is generally known by the Russian acronym GUGI, (Glavnoye Upravleniye Glubokovodnykh Issledovaniy). Missions are believed to include work on undersea communications and sensor networks, hydrocarbon exploitation, submarine rescue and investigating wreckage.

Despite this investment, the GUGI fleet has suffered in a similar way to most of the Russian Navy and was unable to aid in key submarine crises.

In 2000, when Russian submarine Kursk was lost, Russia seemed unable to employ its once-extensive rescue capability. This happened again in 2005 when a Russian submersible, which was being used for seabed work that GUGI’s specialist submarines typically perform, needed rescuing. The Russians then had to turn to the British for assistance.

Many systems and key technologies have been sourced from the West. Starting during the Cold War, but increasing during the time when Russia enjoyed better relations with the West, they acquired key seabed warfare technologies. Typically these technologies dual-use, and they only form part of the wider capability. The first of note were the Mir-class deep-diving submersibles built in Finland during the Cold War. More recently, they include Remote Operated Vehicles from the United Kingdom. These can be used in oil exploration, but Russia also employed one to help search for the sunken Argentinean submarine San Juan.

Although the luck of the Russian Navy has improved since the low point of the 2000s, GUGI capability still suffers uncertainty. More recently, Losharik suffered a fatal battery fire in 2019 and had to be taken for repairs.

Based on the latest imagery from Capella Space, Losharik has been sitting out of the water in Severodvinsk for some time. It is likely it has now been moved into a shed for work over the winter. In her stead, it was reported, that Russia may modify one of the older Uniform-class boats for the tasks. These are similar types of deep-diving submersibles but were not designed to be carried by a mother submarine. It is unclear how practical or cost-effective this would be. 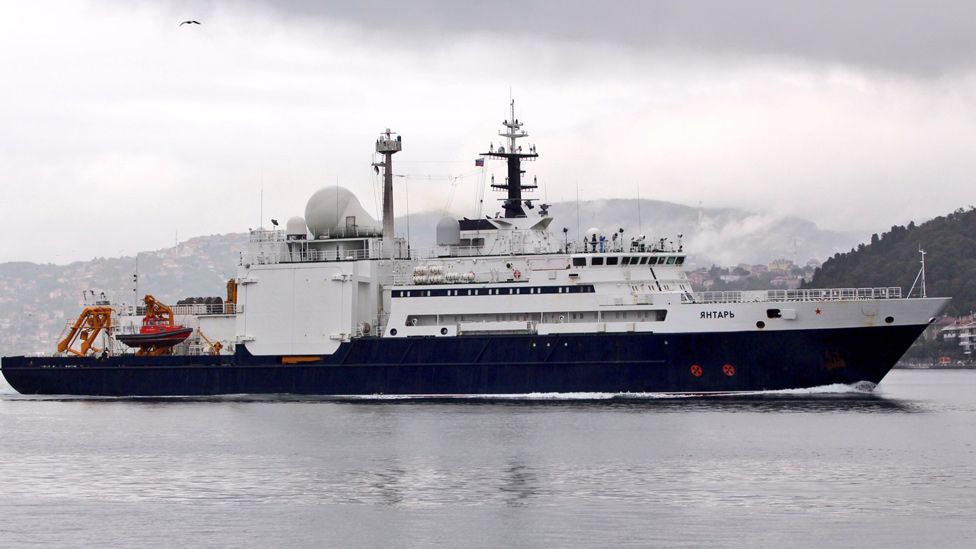 The submarine fleet is concentrated on the Kola Peninsula in the Arctic Circle. The submarines can reach the Mediterranean. In addition to the submarines, GUGI operates specially-equipped surface vessels, including Yantar. Popularly dubbed a spy ship, it is described by Russia as a research vessel. It is equipped with a hangar for extremely deep-diving crewed submersibles and multiple ROVs.Yantar has had a history of loitering near undersea internet cables and similar infrastructure. Most recently it did this off Ireland, but Yantar has also loitered near cables in the Atlantic, Mediterranean and Persian Gulf. Twice in the past, it has been observed working above the wreckage of Russian Navy planes that crashed into the Mediterranean during carrier operations.

Based on available open-source intelligence, Yantar was berthed in GUGI’s base at Olenya Guba (Deer Bay) on the Kola Peninsula when the U.K. F-35 went down. The ship left last week, but its whereabouts are currently unclear. It would take the ship a long time to reach the Mediterranean. If Russia has dispatched a special surface vessel to investigate, another ship that is closer to the wreck seems likely. Ladoga, which is like Yantar but smaller, is based in the Black Sea. Yet it, too, does not appear to have raced to the Mediterranean either to support a Russian mission to recover the crashed U.K. F-35B Lighting II Joint Strike Fighter.