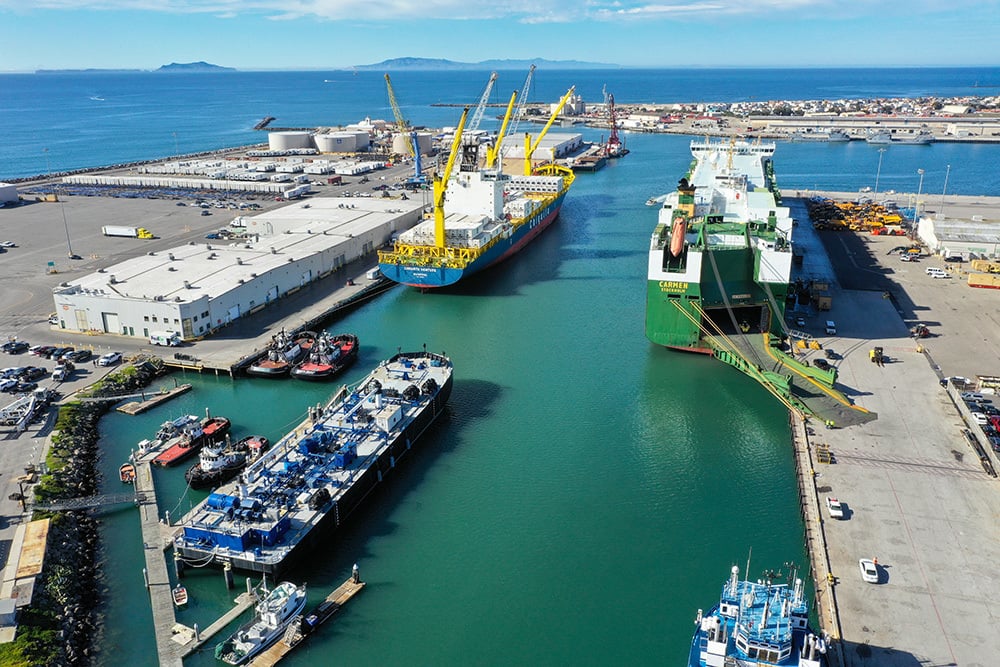 The Navy in partnership with the Oxnard Harbor District (OHD) is providing resources onboard Port Hueneme in direct support of decreasing port congestion in Los Angeles County and reducing the national supply-chain shortage on Nov. 22, 2021. US Navy Photo

With Southern California seaports overburdened by commercial ships and pandemic and supply-driven delays in moving cargo, the Navy agreed to allow cargo-carrying vessels to use one of its military wharves at Port Hueneme, Calif.

Port Hueneme is the only deep-water port sited between San Francisco and Los Angeles that can support the heavy, large commercial vessels with deep drafts that require deeper channels and harbors to take on or offload their cargo.

The Navy’s Nov. 4 decision activated a 2002 “joint use agreement” between the Navy and the Oxnard Harbor District that allows commercial use of the 1,000-foot Wharf 3, an adjoining four acres and a 21-acre industrial land to support loading, off-loading and storing of cargo, providing it doesn’t interfere with the military’s operations. The 40-page agreement has been modified twice with congressional support.

Earlier Monday, the MV Delphinus Leader, a car carrier, pulled into the port at Wharf 3, according to Marinetraffic.com. On Friday afternoon, MV Chiquita Venture, a container ship, was anchored outside the port and harbor entrance, according to online vessel trackers. The container ship had visited Port Hueneme on Nov. 11 for two days before stopping at ports in Mexico and Guatemala. Berthed inside at the regular commercial berths on Friday were MV Del Monte Harvest, a container ship, and MV Grand Race, a vehicle carrier.

While the joint-use agreement gives access for ships to berth and cargo, including containers and vehicles, and to be offloaded and stored for follow-on transportation, it doesn’t mean sailors and base workers are jumping in to help with transportation and logistics.

The naval base “is providing a wharf and containment storage space, but we are not providing labor,” Drew Verbis, a Naval Base Ventura County spokesman, told USNI News.

The extra berth will be a boost to the local port if more commercial ships opt to pull into the harbor rather than face possibly longer delays awaiting space at the ports of Los Angeles and Long Beach, Calif., to the south.

Those ports – the nation’s busiest – have grappled with longer-than-usual waits for ships to offload or take on cargo, forcing more than 100 vessels at times to wait offshore before space was available. The delays were fueled by COVID-19 cases among port workers; shortages of containers, truck drivers, warehouse space and available rail transportation; crowded storage yards and the resurgence in demand for consumer-driven goods that had softened by the pandemic-driven global slowdown.

Recent federal and state efforts to ease some transportation regulations, waive fees might be helping ease the bottlenecks. The ports are also considering moving to 24-hour a day operations. The port was closed Thanksgiving and none of the terminal operators work on Sundays, under existing schedules, according to the port.

Neither of those ports is at full operational capacity. On Nov. 23, one tanker, one bulk carrier and 18 container ships were berthed at the Port of Los Angeles, according to the port’s website. Another 94 vessels were at anchor or drifting in San Pedro Bay, while 45 others were waiting at the Port of L.A.

The city of Oxnard’s harbor is home to two port operations – the Navy’s Port Hueneme and the Oxnard Harbor District. The Navy controls the land along the west and north sides of the harbor, with four large wharves supporting military ships and the Naval Construction Battalion Center. The city of Oxnard controls the east and south sides, with two large wharves and commercial warehouses.

While the availability of one extra wharf at Port Hueneme won’t make a big dent, it provides more options for ship operators, particularly amid the busy holiday shipping season, and without a large impact on Navy operations.

“The Port appreciates the partnership with NBVC and locating additional space to accommodate excess holiday shipments coming through the Port,” Jason Hodge, the harbor district president, said in the Navy release. “We are delighted to come together to meet the challenge of providing a solution to help keep essential goods moving. Our long-standing history of partnership continues with this call-to-action to address the national supply chain challenge.”

“The Navy recognizes the importance of being good neighbors with our local communities, and makes every effort to provide support when current operational requirements allow,” said Capt. Robert Kimnach, the base commander. The agreement “is in direct support of reducing port congestion and the national supply-chain shortage and demonstrates one example of the positive, long-term partnership between the Navy and the local community.”

The Navy, in 1942, took over the port and eventually turned over Wharf 1 and Wharf 2 to the commercial operators, according to the Port of Hueneme website. It’s become a regular handler of ships hauling bananas, automobiles, domestic oil and fresh produce, with $8.75 billion in trade moving through the port in 2020 and $8.06 billion moving through in September of this year. That’s a fraction of the $460 billion in cargo that the ports of Los Angeles and Long Beach combined moved last year.