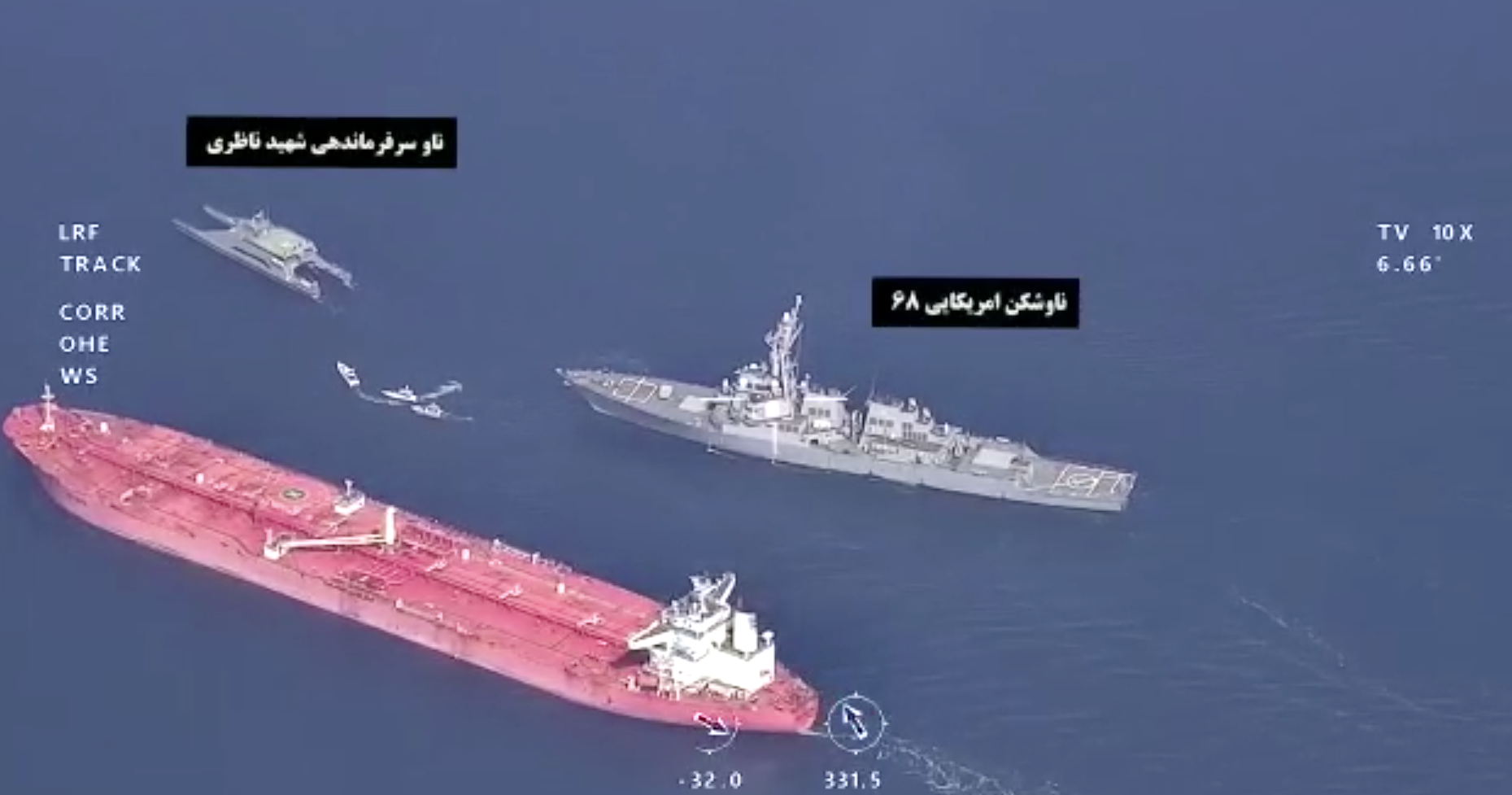 Image from Iranian television of the tanker Sothys and a U.S. destroyer on Oct. 24, 2021.

A tanker once full of crude oil is back at sea more than two weeks after the Iranian Islamic Revolutionary Guard Corps Navy took control of the merchant ship in the Gulf of Oman, Iranian officials said on Wednesday.

Vietnamese-flagged merchant tanker M/V Sothys departed the Iranian port of Bandar Abbas on Wednesday after IRGCN troops took control of the ship on Oct. 24 in the Gulf of Oman.

“Following an order from Iran’s judiciary, the ship was released after its oil cargo was emptied in Bandar Abbas,” reads a statement from the IRGCN in state-controlled media.

While the tanker was taken late last month, the seizure of Sothys only came to public attention when Iran state television published video of two U.S. guided-missile destroyers and at least one U.S. Coast Guard cutters sailing near the tanker and several IRGCN vessels.

According to the Iranian version of events, USS The Sullivans (DDG-68) and USS Michael P. Murphy (DDG-112) had attempted to detain the tanker and were warded off by IRGCN forces.

The Pentagon denied the accusations last week, with spokesman John Kirby calling the report “a bogus claim.” Kirby did not elaborate on the circumstances of the encounter.

The Iranian video was shot from several angles, began with an IRGC UH-1 Huey landing on the deck of the tanker and then shifted to a series of drone footage above the encounter that showed IRGCN fast attack craft and troops aboard with weapons pointed at the U.S. warships.

Two defense officials told USNI News that the destroyers were investigating a suspected crime when IRGC forces approached the ships.

The group TankerTracker.com published a track of Sothys from June in which the tanker took on 700,000 barrels of cargo from M/V Oman Pride. The tanker attempted to offload the oil in China in August, but was turned away and sent back to Iran due to international restrictions.

Iran is still saddled with sanctions over its nuclear program that limit Tehran’s ability to sell its oil. As a result, Iran has attempted to use at-sea transfers of oil and several different ships to try and skirt sanction restrictions, Behnam Ben Taleblu, an Iran expert at the Foundation for the Defense of Democracies, told USNI News on Wednesday.

The release of the tanker can be understood politically for two reasons, he said.

“First, Iran’s desire to interrupt maritime shipping and escalate tensions for oil shippers and producers to generate leverage for sanctions relief, particularly sanctions related to Iran’s oil sale, supply, insurance, and transfer networks,” he said.
“Second, and perhaps more importantly, Iran’s desire to continue selling and transferring oil while under sanctions, which has led to using tankers as floating storage and engaging in multiple ship-to-ship transfers just to mask the origin of the oil.”

SOTHYS received her 700,000 barrels of Iranian oil cargo in June from OMAN PRIDE in the anchorage of Sohar, Oman. OMAN PRIDE picked up 2 million barrels in Iran last October. SOTHYS was denied entry into Longkou, China this July/August and went back to the Middle East. pic.twitter.com/0jZ3xC2y3b

TankerTracker.com concluded that Sothys went back to Iran to shed the oil for another attempt at a sale and that the IRGC used the tanker to create an opportunity to embarrass the U.S. with a propaganda victory via “a music video starring [the U.S. Navy],” the organization posted.

A defense official told USNI News on Wednesday that the IRGC had engineered a “Hollywood production,” for propaganda purposes and after arriving and surveying the scene, the U.S. crews realized there was, “no point in trying to engage.”