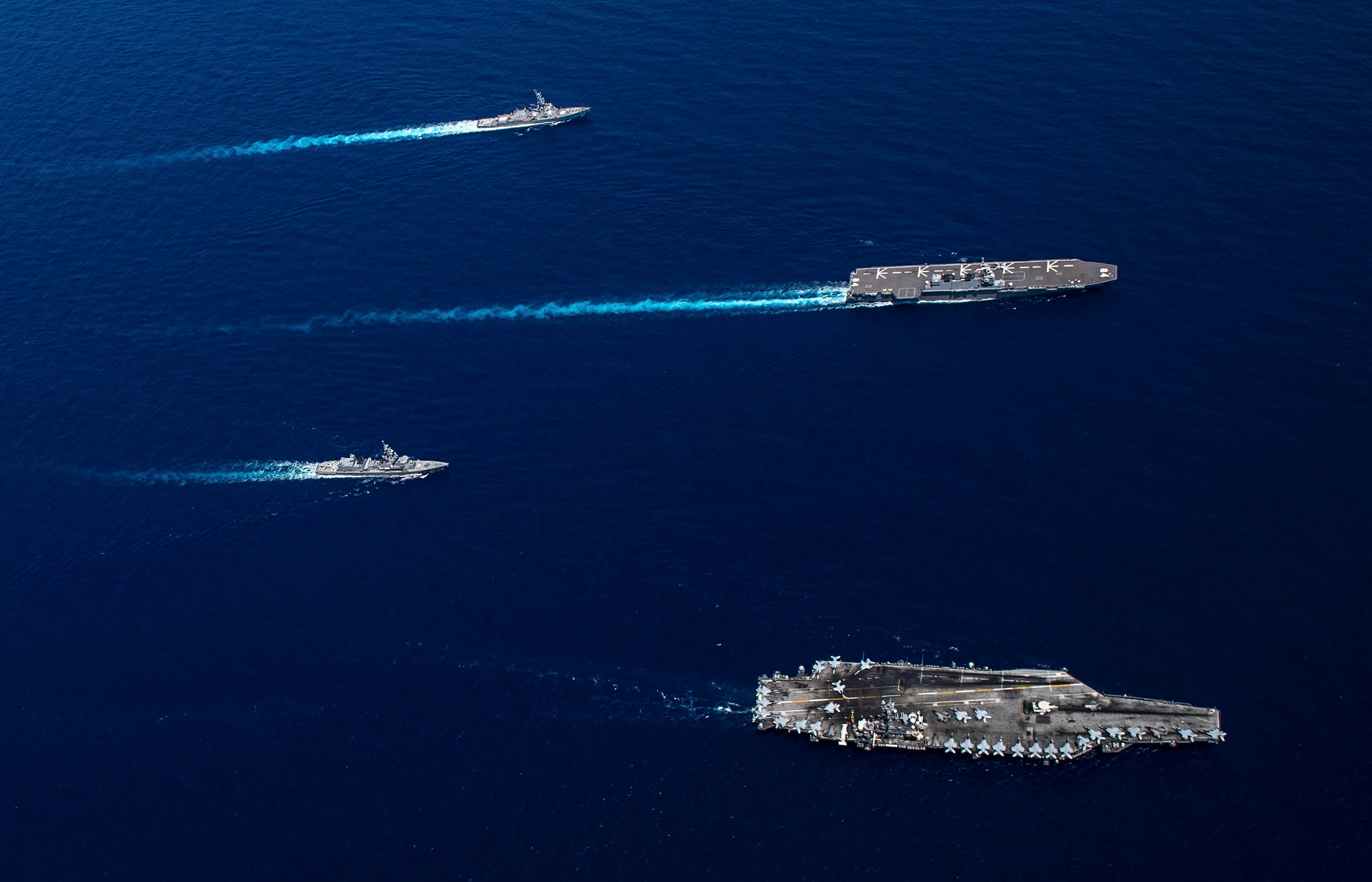 Rear Adm. Dan Martin, the commander of Carrier Strike Group 1, came aboard Kaga for a meeting with Rear Adm. Ikeuchi Izuru, the commander of Escort Flotilla 3, according to an Oct. 30 JMSDF news release. The two commanders discussed the significance of the joint activities of Japanese and U.S. naval forces in the South China Sea.

Following the training, Kaga and Murasame then made a port call in Cam Ranh, Vietnam from Nov. 5 to 7 and conducted an exercise with the Vietnam People’s Navy (VPN) frigate Đinh Tiên Hoàng (HQ-011) upon departure.

Meanwhile, several Royal Australian Navy ships have completed their deployments to the Indo-Pacific. Frigate HMAS Ballarat (FFH155) and replenishment ship HMAS Sirius (O266) are now back in Australia after a deployment that saw Ballarat participating in phase two of the Malabar exercise off India and Sirius replenishing RAN and partner nation ships in both the Indian Ocean and Southeast Asian waters.

The deployment is Sirius’s last operational deployment, as the ship will be decommissioned in December. The RAN’s Indo-Pacific Endeavour 2021 (IPE21) task group, comprising of LHD HMAS Canberra (L02) and frigate HMAS Anzac (FFH150), is now heading home. The IPE21 task group departed Australia in late August for a series of engagements with Australia’s partners in Southeast Asia and to participate in the Five Powers Defence Arrangement (FPDA) exercise Bersama Gold. The last official activity for IPE21 was Exercise New Horizon 21 between Anzac and Indonesian Navy frigate KRI I Gusti Ngurah Rai (332) and corvette KRI Malahayati (362). The exercise took place in the Java Sea and Bali Sea from Oct. 31 through Nov. 3.

The Royal New Zealand Navy replenishment ship HMNZS Aotearoa (A11) also returned home, arriving in Auckland on Sunday following an Indo-Pacific deployment that included participating in Bersama Gold. Frigate HMNZS Te Kaha (F77), which was deployed with Aotearoa, is still on deployment. RAN destroyer HMAS Brisbane (D41), currently moored in Japan, and frigate HMAS Warramunga (FFH152) – which is on surveillance patrols in the East China Sea in support of United Nations sanctions on North Korea – are also both still deployed. Brisbane has had a replacement MH-60R Seahawk transported to Japan via a. Royal Australia Air Force C-17 to replace the one it lost in a non-fatal crash in the Philippine Sea in October.

German Navy frigate Bayern (F217) is also in Japan, docking at the Tokyo International Cruise Terminal on Friday, when it was greeted by Japanese Defense Minister Nobuo Kishi, German Chief of Defence General Eberhard Zorn and German Navy Chief Vice Adm. Kay-Achim Schönbach. In mid-November, Bayern will begin the first-ever German participation in monitoring and surveillance activities in support of the U.N. sanctions on North Korea. New Zealand announced last week that a Royal New Zealand Air Force P-3K2 Orion aircraft will deploy from Kadena Air Base in Japan to conduct aerial surveillance and monitoring in support of the sanctions. A Canadian Air Force CP-140 maritime patrol aircraft is conducting the aerial mission until mid-November, while a French Navy Falcon 200 is wrapping up its participation in the mission, according to press reports.

Meanwhile, Russian Navy corvette Gremyashchiy (337) and submarines Petropavlovsk-Kamchatsky (B274) and Volkhov (B603) passed through the Singapore Strait on Friday. The corvette and submarines were previously part of the Russian Navy’s Baltic Fleet and are now en-route to their new home bases as part of Russia’s Pacific Fleet.