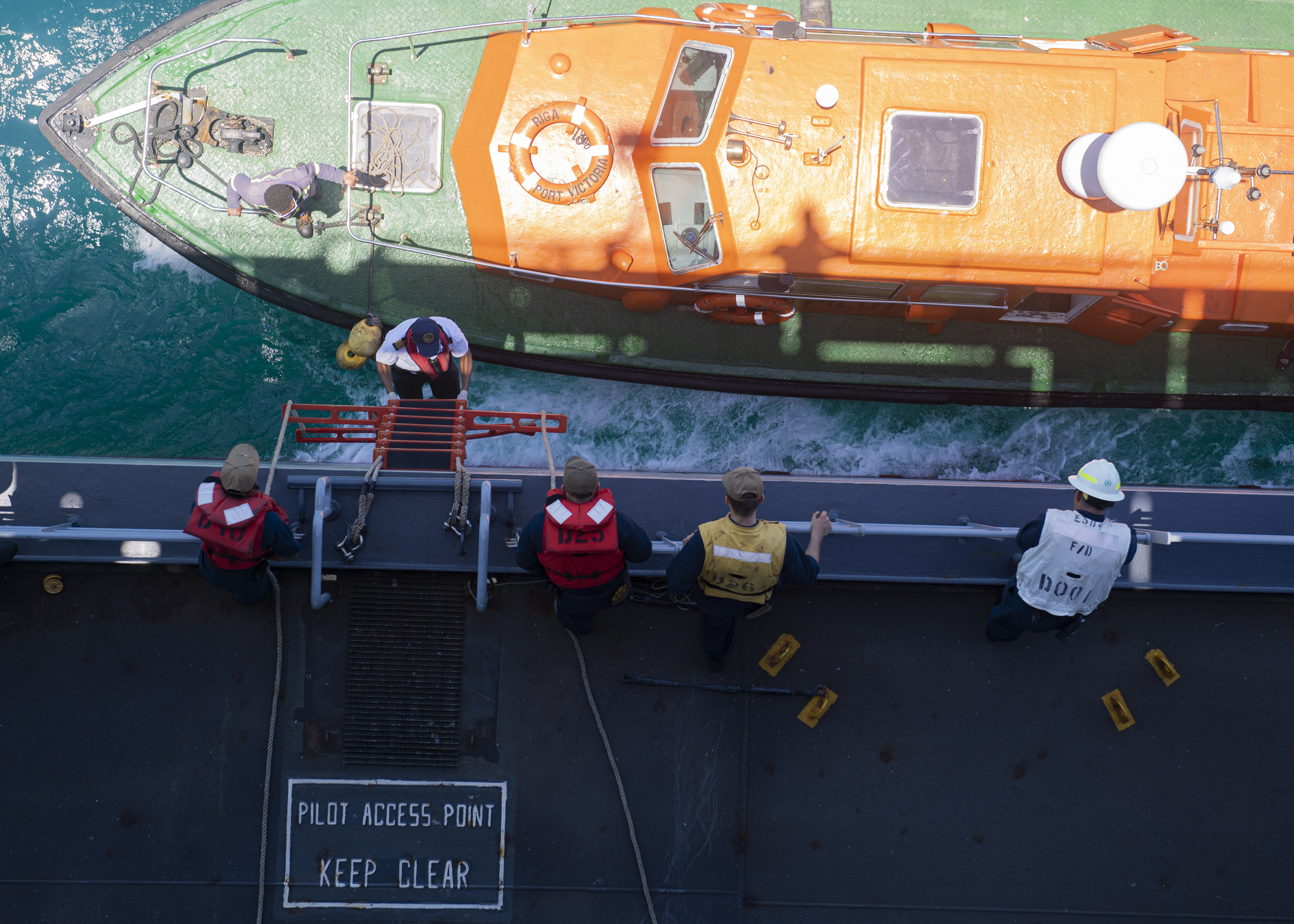 A pilot boat pulls alongside the Expeditionary Sea Base USS Hershel ‘Woody’ Williams (ESB-4) to help the ship navigate the port in Victoria, Seychelles on Oct. 29, 2021. US Navy Photo

The Navy is taking its sole ship assigned to U.S. Africa Command to places the service hasn’t been in almost a decade – including a key chokepoint that’s become a major opioid drug trafficking route.

Williams – which first deployed to AFRICOM in July 2020 – was the first U.S. Navy ship to sail through the waters between Mozambique’s coast and Madagascar since the HSV-2 Swift transited in 2012.

In written answers to questions from USNI News, commander Capt. Chad Graham described Williams’ recent operations and port calls throughout the region as a way for the U.S. to build relationships with countries not used to a U.S. Navy presence.

“During this deployment our primary focus has been crew training and at-sea exercises with our partners. The majority of the countries we have worked with have not had a U.S. ship visit in over ten years,” Graham told USNI News. “My primary mission has been to reestablish these maritime relationships, and at-sea interoperability, through maneuvering exercises, visit board search and seizure training and communication drills.”

While Williams has operated in regions known as piracy hot spots, like the Gulf of Guinea, throughout its deployment, the recent transit through the Mozambique Channel took the ESB through waters known for illicit drug trafficking. 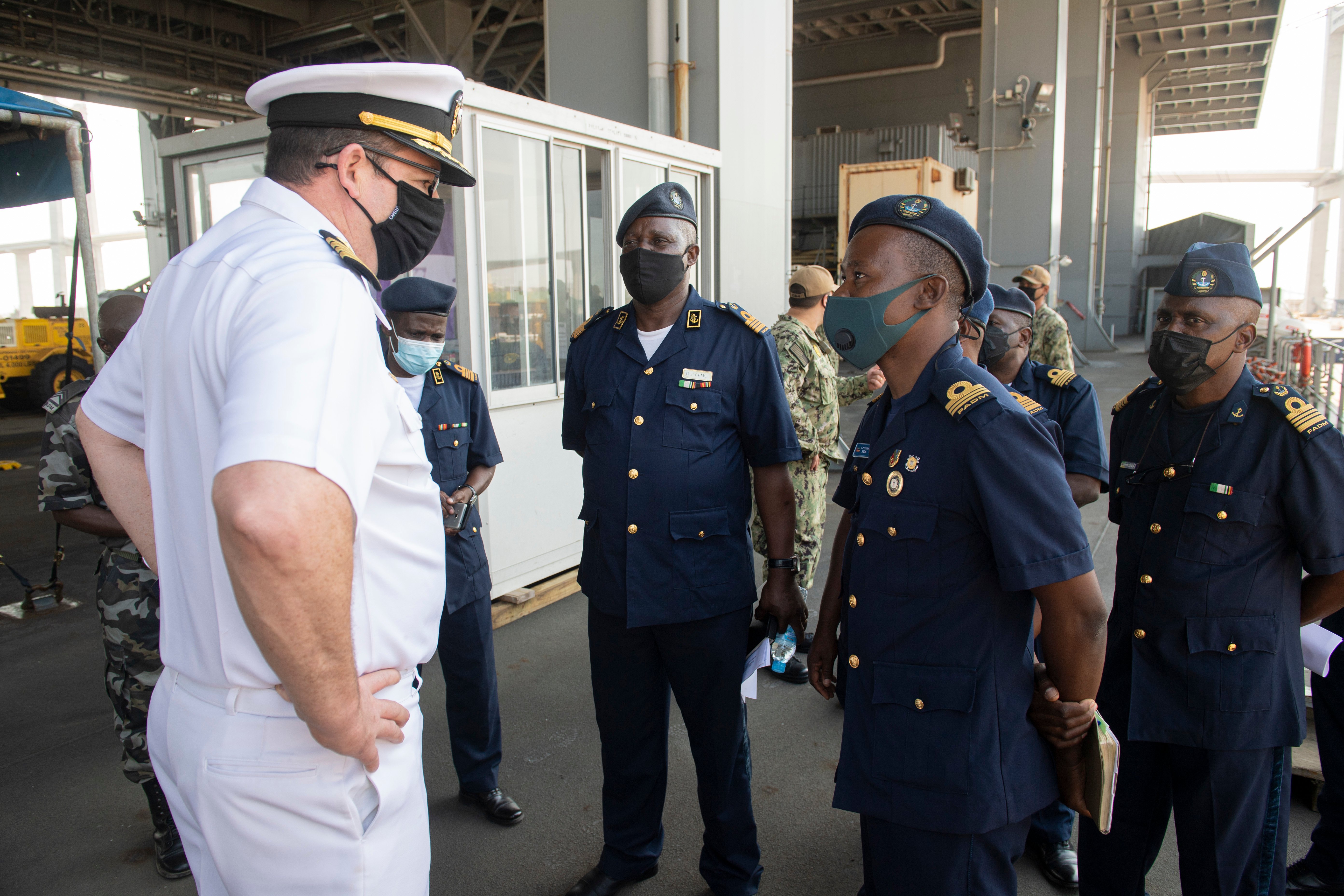 “In southeast Africa and the Mozambique Channel, drug smuggling along the Southern Route is a significant threat, as traffickers move narcotics from the Makran Coast of Iran [and] Pakistan into African countries on the southeast coast intended for local African markets and further export to Europe,” a U.S. defense official told USNI News.

According to a 2021 report from the United Nations Office on Drugs and Crime, the southern route has seen “increasing quantities of opiates” that are heading to Europe and South Asia.

“The southern route includes an array of other trafficking routes running mostly south from Afghanistan. Opiates are mainly trafficked along the route via Pakistan and/ or via the Islamic Republic of Iran to India, for domestic consumption and re-export to countries in the region, and to Africa, for local markets and re-export to Europe,” the U.N. report reads. “Seizures of heroin and morphine reported by countries along the southern route (excluding Pakistan) rose from 2.7 tons in 2015 to 9.4 tons in 2019; their overall share of the global quantities of seized opiates that resulted from opium produced in Afghanistan rose from 3 percent in 2015 to 8 percent in 2019.”

In September, French guided-missile frigate FS Languedoc (D 653) conducted two separate drug seizures in the Indian Ocean that impounded thousands of kilograms of drugs valued at more than $7 million, according to a news release from the Combined Maritime Forces. 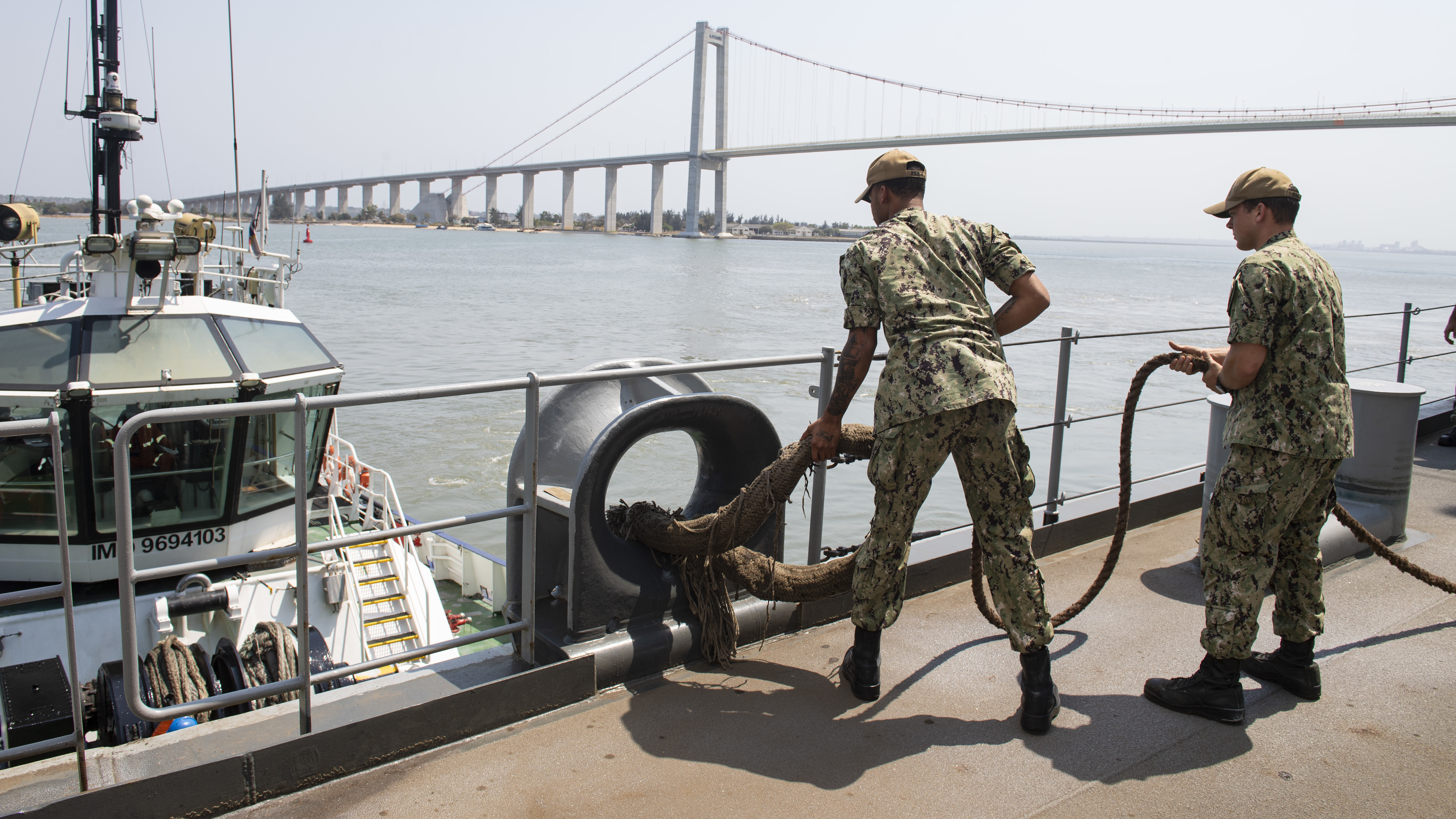 Boatswain’s Mate Seaman Tyshaun Hickson, second from right, and Seaman Apprentice Ethan J. Dowden feed line through a chock back to a tugboat aboard the Expeditionary Sea Base USS Hershel ‘Woody’ Williams (ESB-4) as it pulls into port in Maputo, Mozambique on Oct. 15, 2021. US Navy Photo

Warships from multiple countries operating off the coasts of Africa in recent years have served as a deterrent against actions like piracy and are part of the decrease in Somali piracy, Guy Wilson-Roberts, the head of intelligence analysis for Risk Intelligence told USNI News. But when it comes to countering drug trafficking, Wilson-Roberts noted the difficulty in tracking and observing some of the local vessels that move throughout the region.

“We know smuggling was extensive. It takes place along the coastline of countries in the region. It takes place across longer distances across the Indian Ocean into south Asia using larger vessels. And so it’s difficult to get an overall picture I think as to the volume of smuggling taking place,” Wilson-Roberts told USNI News.
“And so some of the high profile busts that take place from time to time give us a little bit of an insight into the scale of the operations,” he added. “But I think, unfortunately, like drug smuggling worldwide, the interceptions that take place are often quite significant, but are really only affecting the smuggling activity in a small way. The volume of traffic is simply too large to interdict everything.” 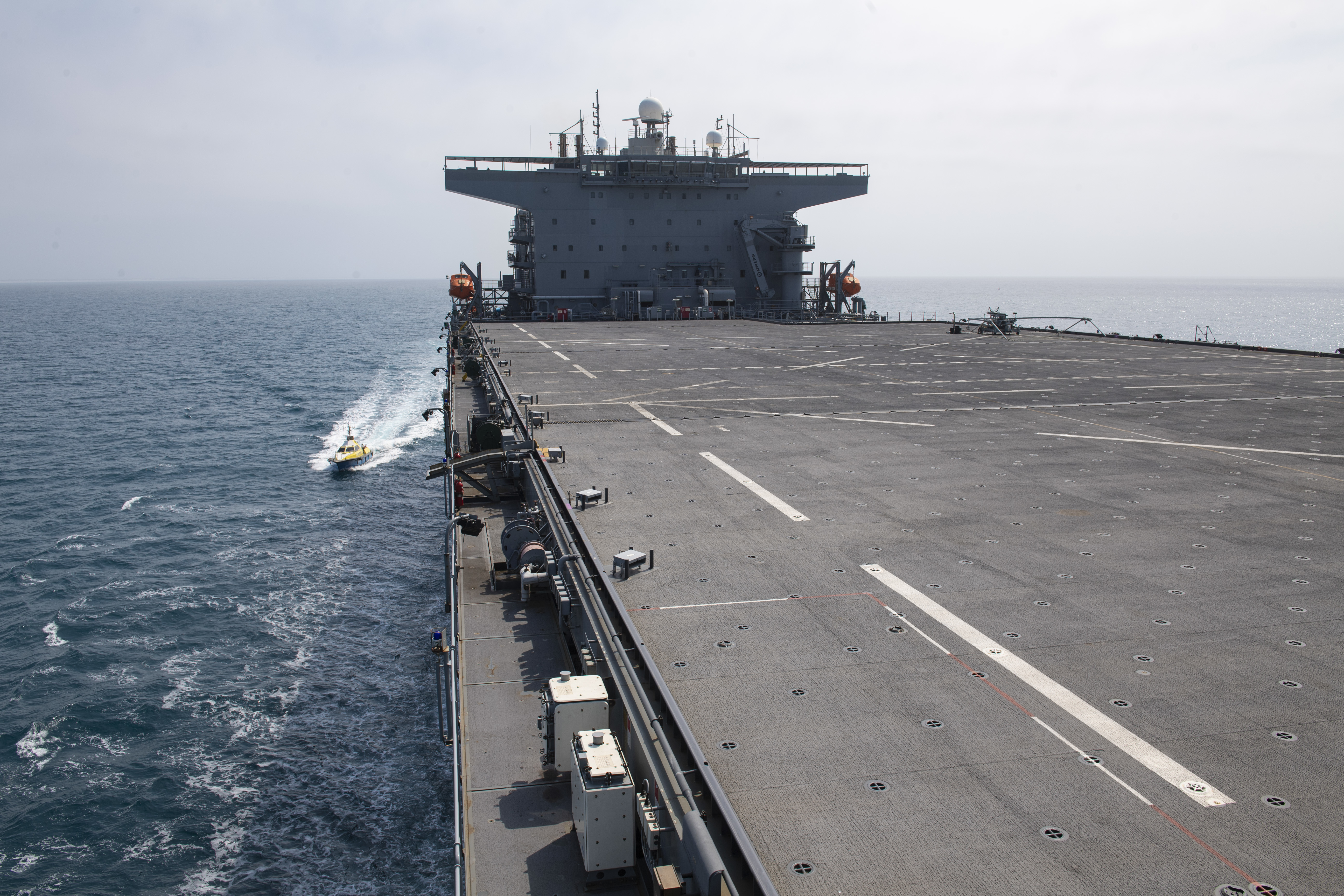 A pilot boat approaches the Expeditionary Sea Base USS Hershel ‘Woody’ Williams (ESB-4) as it pulls into port in Maputo, Mozambique on Oct. 15, 2021. US Navy Photo

The sole ship assigned to AFRICOM, Williams recently circumnavigated the continent in a deployment that included stops in at least eight countries on Africa’s coasts, according to a Navy fact sheet provided to USNI News.

Williams has also trained with both African countries like Ghana and Nigeria and other nations like Brazil during the deployment, USNI News recently reported.

“As the only ship assigned to AFRICOM, I feel it is my responsibility to improve, or in some cases establish, relationships with all of the nations that share a mutual concern for the maritime security of Africa,” Graham told USNI News. “It is a privilege to work alongside these African nations and be the physical representation of the United States’ commitment to their future security. The relationships that we have built through this deployment have set the important groundwork for future opportunities aimed at enhancing maritime security and interoperability in the region.”