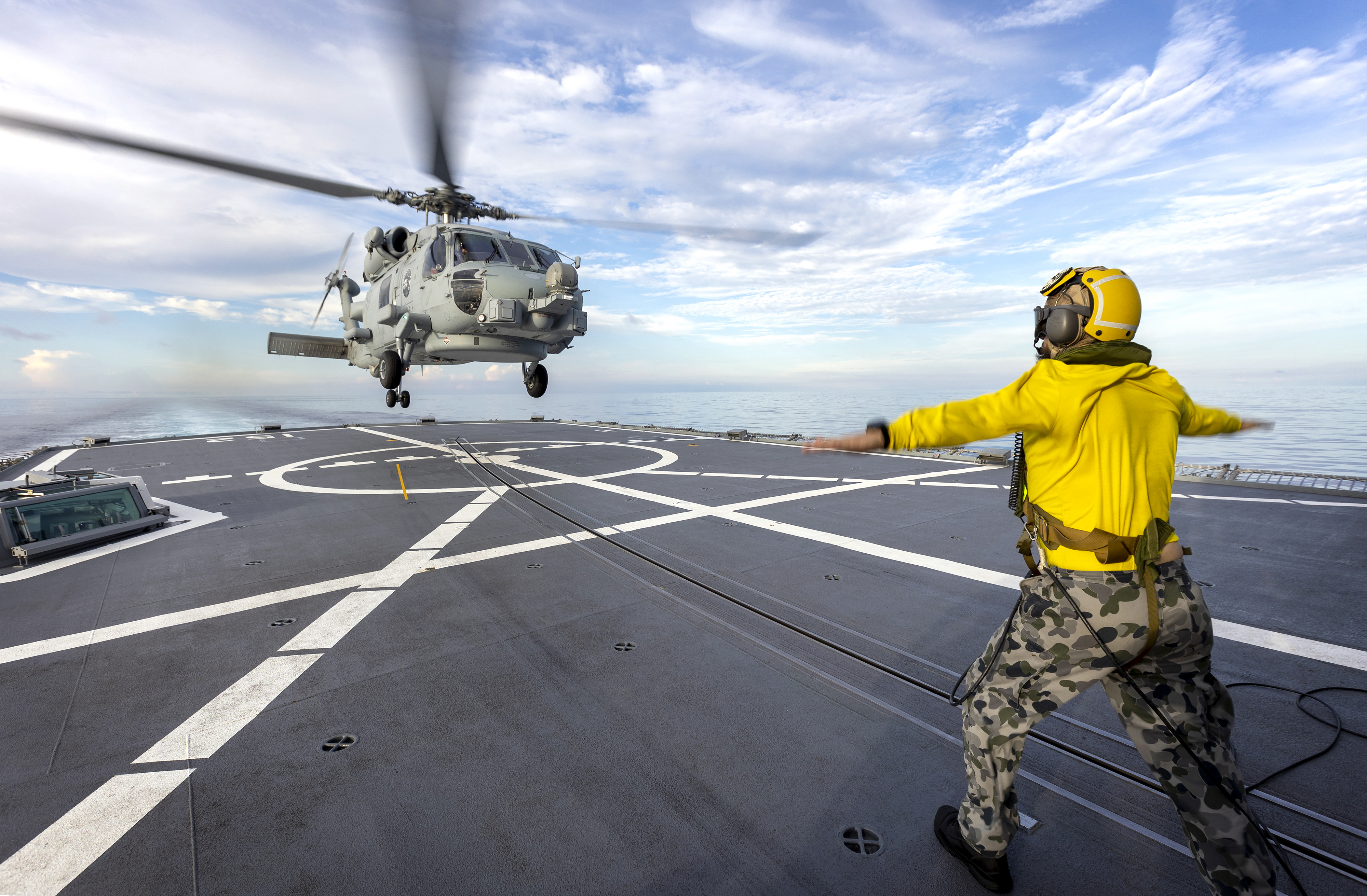 KUALA LUMPUR – All three crew members of a Royal Australian Navy MH-60R Seahawk helicopter were recovered safely after the aircraft crashed in the Philippine Sea during a routine flight late Wednesday.

The aircraft was operating from destroyer HMAS Brisbane (DDG41) as part of a regional presence deployment with frigate HMAS Warramunga (FFH152) when the crew conducted an emergency landing in the water, the Australian Department of Defence said in a news release Thursday. Brisbane deployed sea boats and rescued the crew approximately 20 minutes later. The crew received first aid for minor injuries upon their return to the ship.

“The successful rescue is credit to the devotion to duty and skill of the officers and sailors of HMAS Brisbane,” Commander of the Australian Fleet Rear Adm. Mark Hammond said in the news release. “Their immediate actions ensured the survival of the aircrew, validating the significant training undertaken in the event an emergency of this nature occurs.”

Hammond also said flying operations for the MH-60R fleet would be temporarily paused. The RAN operates a fleet of 24 MH-60R, including the one that crashed into the sea. Both ships are in the area searching for debris that will aid in determining the cause of the incident, according to the Australian Department of Defence.

The Armed Forces of the Philippines (AFP) in a Thursday statement said the AFP was informed of the crash involving an Australian MH-60R Seahawk Helicopter Wednesday night while transiting east of Luzon. AFP said it is still coordinating with its Australian counterparts on the matter and has expressed readiness to provide assistance.

Brisbane left Australia with frigate HMAS Ballarat (FFH155) at the end of September for a deployment to the Indo-Pacific region. Prior to the incident, Brisbane and Warramunga conducted a joint sail in the Philippine Sea with Royal Canadian frigate HMCS Winnipeg (FFH338), before Winnipeg arrived in Manila on Monday.

Ballarat is now in the Bay of Bengal with the replenishment ship HMAS Sirius (O266) for Phase II of the Malabar exercise with India, Japan and the United States, though it is unclear as to whether Ballarat has an embarked MH-60R aboard. Frigate HMAS Anzac (FFH150) has an embarked MH-60R and is currently taking part in the Five Power Defence Arrangements’ Bersama Gold exercise in the waters off Malaysia and Singapore with landing helicopter dock HMAS Canberra (L02). Anzac, together with Canberra, forms the Australian Defence Force Indo-Pacific Endeavour 2021 (IPE21) task force, which left Australia in late August for a deployment to South East Asia to conduct engagement with Australia’s South East Asian partners and participate in Bersama Gold. The task force is slated to return to Australia in mid-November.

On Friday, the U.S. Defense Security Cooperation Agency notified Congress of the potential foreign military sale of 12 MH-60Rs to Australia. The DSCA statement said the Australian government has requested to buy 12 helicopters; 30 T-700-GE-401C engines – 24 installed, six spares; – along with various other related equipment, spare parts, training, testing and support services for an estimated value of $985 million.