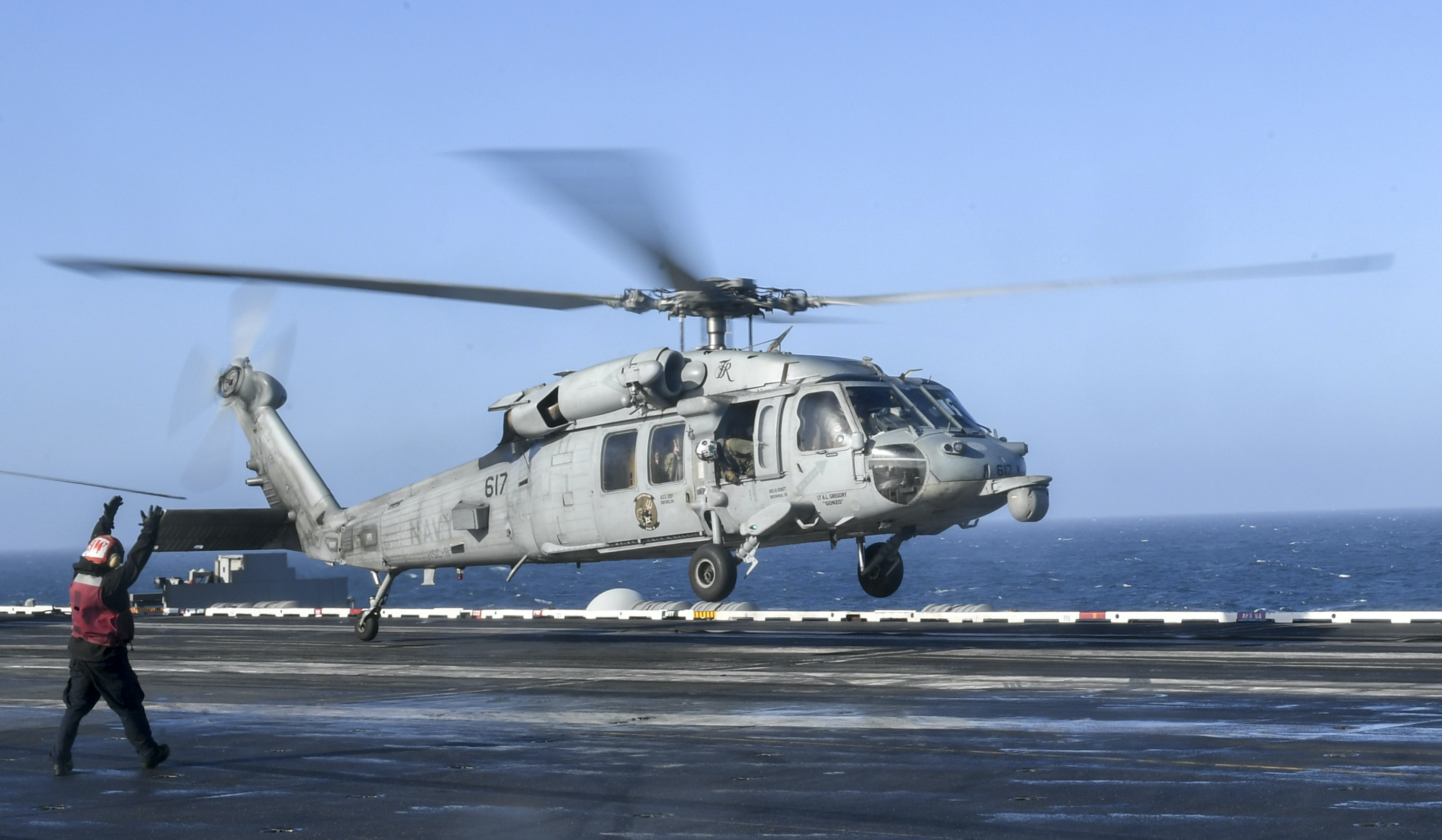 An MH-60S Knighthawk, assigned to the ‘Eightballers’ of Helicopter Sea Combat Squadron (HSC) 8, takes off from the flight deck of the aircraft carrier USS Theodore Roosevelt (CVN-71) on May 20, 2021. US Navy Photo

The Navy is organizing a deep-water salvage operation for what is believed to be the wreckage of the helicopter that crashed three weeks ago and sank in the eastern Pacific from the deck of an aircraft carrier, USNI News has learned.

A search-and-salvage team has located, at a depth of 5,300 feet below the surface, what the Navy thinks is the missing MH-60S Knighthawk assigned to the “Eightballers” Helicopter Sea Combat Squadron (HSC) 8, a Navy official confirmed.

“The U.S. Navy located the probable wreckage of the MH-60S helicopter that crashed into the sea, Aug. 31, near its last known location approximately 60 nautical miles off the coast of San Diego,” Cmdr. Sean Robertson, a U.S. 3rd Fleet spokesperson, said Wednesday. “With the probable location identified, the Navy has begun mobilizing units that will be used to verify the site and retrieve the helicopter.”

Another sailor who was in the helicopter was rescued from the ocean before the helicopter sank, the Navy said. Five sailors working on the carrier’s flight deck were injured in the mishap.

It’s unclear what caused the helicopter to malfunction while it was operating on the flight deck as USS Abraham Lincoln (CVN-72), which was at sea training about 60 miles southwest of San Diego, Calif. A summary of the incident released by the Navy Safety Center said the helicopter “experienced side-to-side vibrations causing main rotor to strike flight deck.” The aircraft then fell over the side of the carrier.

Recovery of the MH-60 – along with recovering the remains of the crew members – is expected to help mishap investigators figure out what happened.

“They have moved nothing yet,” Robertson said.

The teams located what is presumed to be the MH-60S using the Shallow Water Intermediate Search System (SWISS) with its towed side scanner and the Towed Pinger Locator 25, or TPL-25. SWISS uses a towed, torpedo-shaped, side-scanning sonar that can search waters as deep as 8,000 feet. TPL-25 is a towed, fish-shaped device that passively listens for emergency relocation pingers – such as those on aircraft data flight recorders – located as deep as 20,000 feet underwater.

But further investigation is needed to confirm that the wreckage is that of the MH-60S, and not some other sunken craft. If confirmed that it’s the HSC-8 helicopter, deep-salvage equipment will be on hand to retrieve the helicopter and the remains of the lost sailors and bring them back to land, Robertson said.

Officials wouldn’t say how soon that search-and-recovery mission will begin.

“It’s a question of putting together the assets to go out and take a look,” Robertson said.

The work – particularly at that deep, 5,300-foot depth – will require more specialized search and recovery equipment. Such equipment includes remotely operated vehicles that are more robust to bring wrecked aircraft and remains to the surface. One is CURV-21, a 6,400-pound ROV designed to meet the U.S. Navy’s deep ocean salvage requirements down to a maximum depth of 20,000 feet of seawater, according to NAVSEA.

Earlier this year, salvage teams using CURV-21 successfully located and recovered an MH-60S Knighthawk that had crashed off Okinawa in 2020 and sunk to a depth of 19,075. That mishap happened as the Seahawk was operating from 7th Fleet’s amphibious command ship USS Blue Ridge (LCC-19). The aircrew escaped from the helicopter before it sank, and no one was hurt in the mishap.