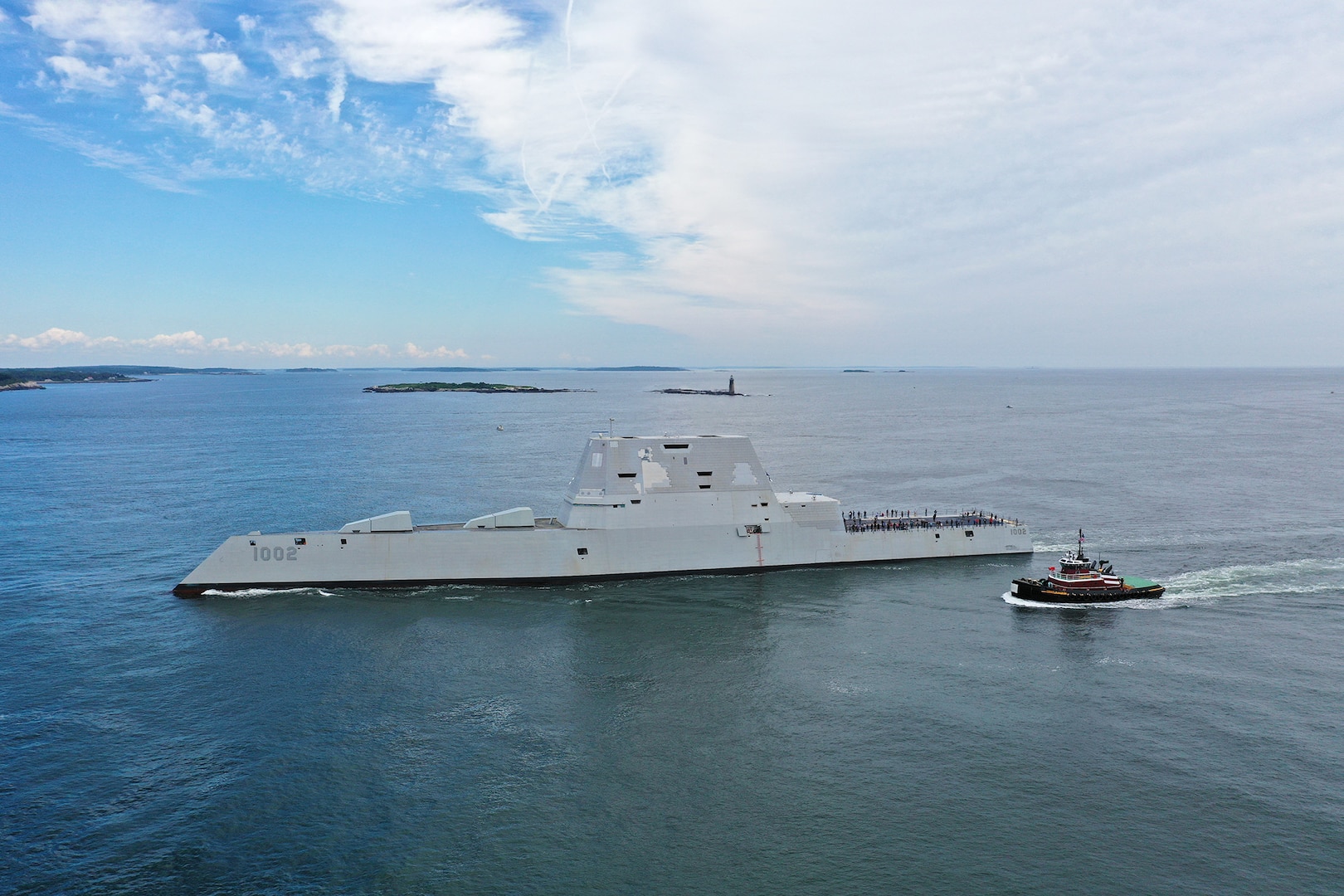 Guided-missile destroyer Lyndon B. Johnson (DDG-1002) will head to a Mississippi shipyard to finalize the ship’s combat system activation, USNI News has learned.

The move to complete the installation and testing of the ship’s air search radar, vertical launch missile cells and other components that comprise the combat system at Ingalls is a break from how the previous two Zumwalts – USS Zumwalt (DDG-1000) and USS Michael Monsoor (DDG-1002) – handled their combat activations.

Zumwalt and Monsoor both delivered and commissioned before transiting from Bath, Maine to Naval Station San Diego, Calif., for the complete combat system activation. Space at Bath is at a premium and the decision was made for a hybrid delivery of the ships to free up room and resources for the yard’s work on the Arleigh Burke-class (DDG-51) of guided-missile destroyers, which are behind schedule.

The heart of the Zumwalt-class is the Integrated Power System, a complex electrical grid that routes the power from the ships engines across the ship, rather than a direct mechanical connection to the ships. The electricity generated by ships in the Zumwalt class could power a small town and the destroyer has excess energy for a variety of weapons and sensors well into the ship’s service life. However, the complexity of the technology has contributed to delays in delivery of the three-ship class, USNI News has previously reported. The Navy’s dual-delivery scheme was intended, in part, to relieve pressure on the yard.

In a June brief to the Government Accountability Office, the Navy explained its rationale to change the delivery scheme again.

“For DDG-1002, the Navy changed its delivery plan over the past year. According to the program manager, instead of taking custody of the ship from the builder’s yard and completing the combat system at Naval Base San Diego, the Navy is now planning to contract with a private shipyard to install the combat system and will not take delivery or commission DDG-1002 until it is fully complete,” reads a GAO report on major acquisition programs. “The program manager stated that this new approach may result in additional schedule delays; however, it will free up valuable pier space in Naval Base San Diego and enable the Navy to avoid moving the crew onboard DDG-1002 until it is ready to operate. The program manager identified the change as a response to lessons learned from DDG-1000 and 1001—specifically, that completing combat system activation and final construction is complicated by onboard crew, in part, because access to spaces is more constrained.”

Under the plan, the ship may not deliver to the Navy until 2024. 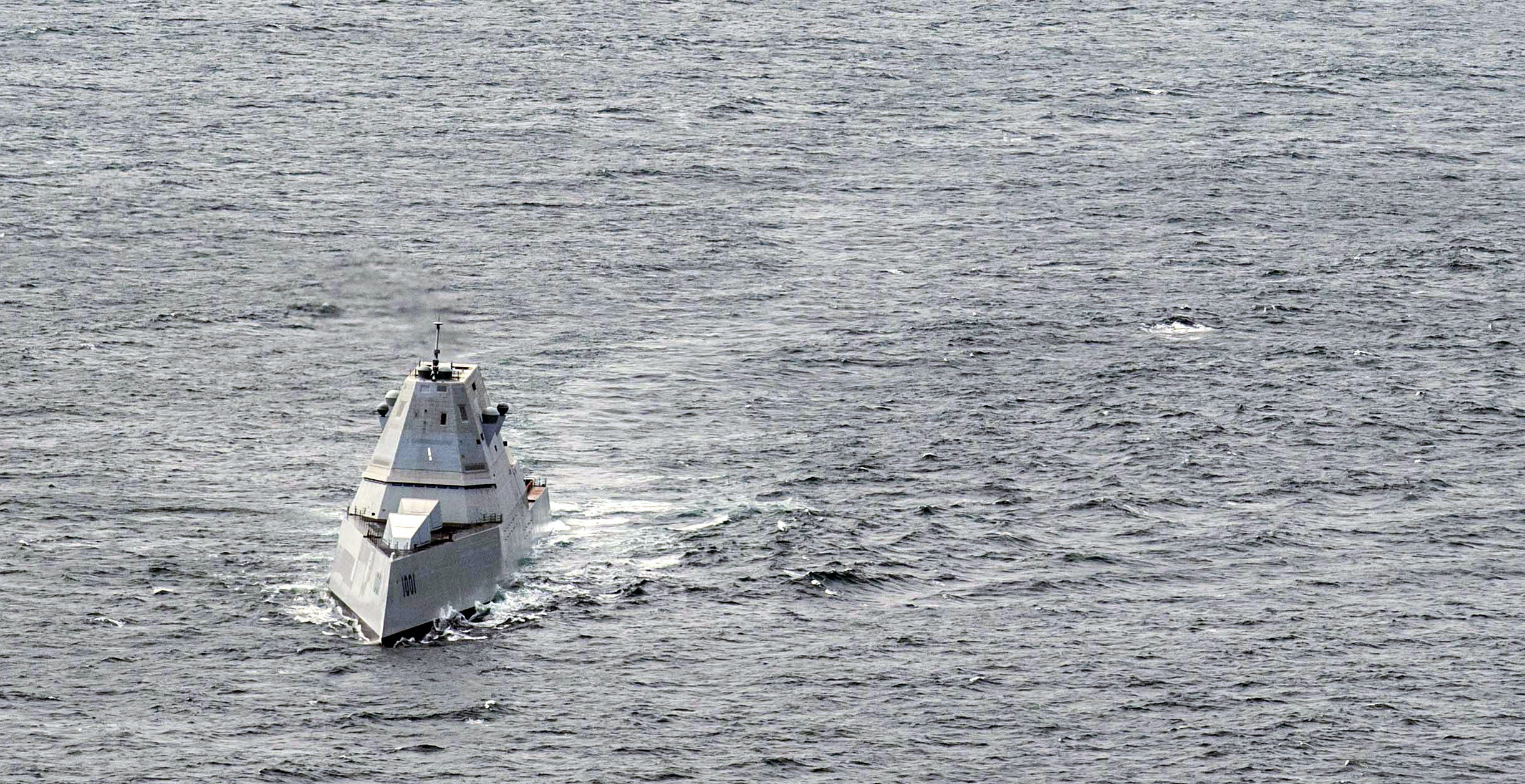 “The Navy now plans delivery of DDG 1002 with its combat systems in January 2024—a 16-month delay compared to last year’s estimate of September 2022—and further delays are possible given its planned change in delivery approach. The program manager attributed the current delay to a strike at the shipyard and COVID-19-related complications,” according to the GAO.

What remains unclear is if the combat system activation will include the installation of the capacity for Johnson to field a hypersonic weapon. The ship was built around two BAE Advanced Gun Systems that were intended to lob 155mm rocket-assisted-projectiles for more than 60 miles. With the round developed for the system canceled, the Navy will instead use the space to install a capacity for a conventional prompt strike, USNI News has reported.

Chief of Naval Operations Adm. Mike Gilday said in April that the service intends to arm Zumwalt-class destroyers with the weapon, believed to be the Common Hypersonic Glide Body (C-HGB), as part of the service’s move to shift the program to a blue-water strike platform, USNI News reported in late 2017.

“Fielding hypersonics on the Zumwalt-class destroyers will be an important move forward [to] turn that into a strike platform,” he said.