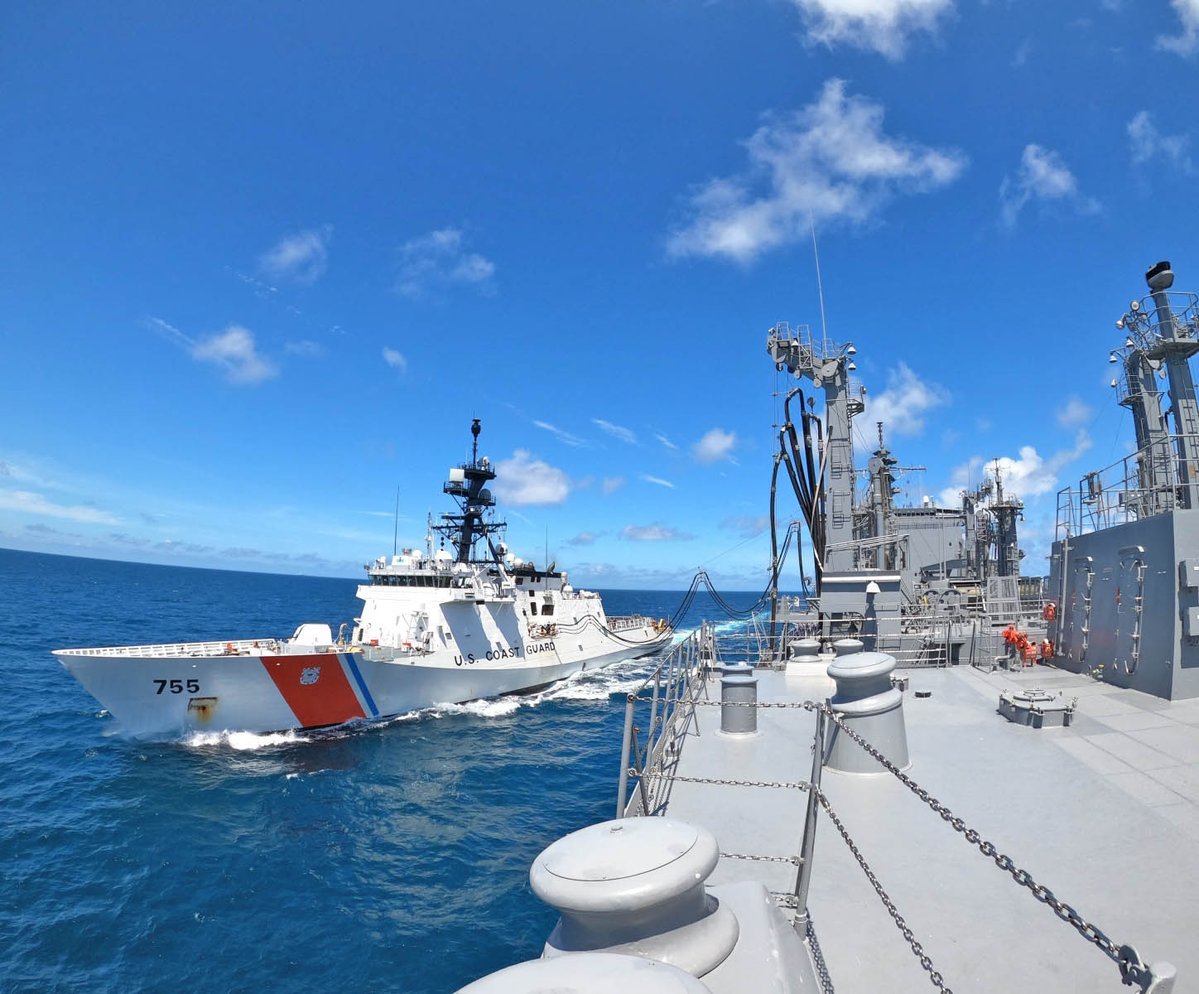 As a military service of the United States, the Coast Guard can integrate seamlessly into defense operations alongside the U.S. Navy and other U.S. military services, and is fully interoperable with U.S. allies, Vice Admiral Michael McAllister, Commander Pacific Area and Commander, Coast Guard Defense Force West, said in a Sept. 3 media call.

But at the same time, its law enforcement and regulatory roles align well with both navies and coast guards in the Pacific region, and Coast Guard missions match the needs of Indo-Pacific nations.

McAllister pointed out the ongoing deployment of USCGC Munro (WMSL-755) under U.S. 7th Fleet, in which it has conducted engagements with the Japanese Maritime Self-Defense Force, Japan Coast Guard, Philippine Coast Guard and the Philippine Bureau of Fisheries and Aquatic Resources.

“We did some joint patrols, a search-and-rescue exercise, and small boat operations with the Japan Coast Guard, and just recently with the Philippine Coast Guard and the Philippine fisheries agency we did a joint patrol, we did exercises in our ability to enforce Exclusive Economic Zones and so forth,” McCallister said, adding that the recent engagement between Munro and the JMSDF was one of cooperative patrolling coincident with other operations.

He added that while Munro is deployed, it conducts operations as directed by 7th Fleet and is part of the integrated naval force, as articulated in the U.S. tri-service maritime strategy.

“But I would offer she is not a duplication or replication of United States Navy capability. We do unique engagements with navies, coast guards, and maritime security agents throughout the region,” he said.

On Aug. 26 Munro conducted both a replenishment and training exercise called “ILEX21-3” with the JMSDF replenishment oiler JS Oumi (AOE426) in the East China Sea.

“This is the first time that a JMSDF supply ship has replenished a U.S. Coast Guard patrol vessel and also the Japan-U.S. ACSA (Acquisition and Cross-Servicing Agreement) has been applied to the U.S. Coast Guard, so I believe that we have further improved interoperability between JMSDF and USCG,” Capt. Yoshifuku Toshihiko, the commanding officer of Oumi, said in a JMSDF news release.

McAllister said the U.S. Coast Guard sees Japan as amongst its most valued partnerships. “And that’s both from a maritime perspective through the Maritime Defense Force and from missions that align really well with the Coast Guard to the Japan Coast Guard,” he said, adding that the Coast Guard receives great support on the North Pacific Guard enforcement initiative both on the operational side and for logistics capability. 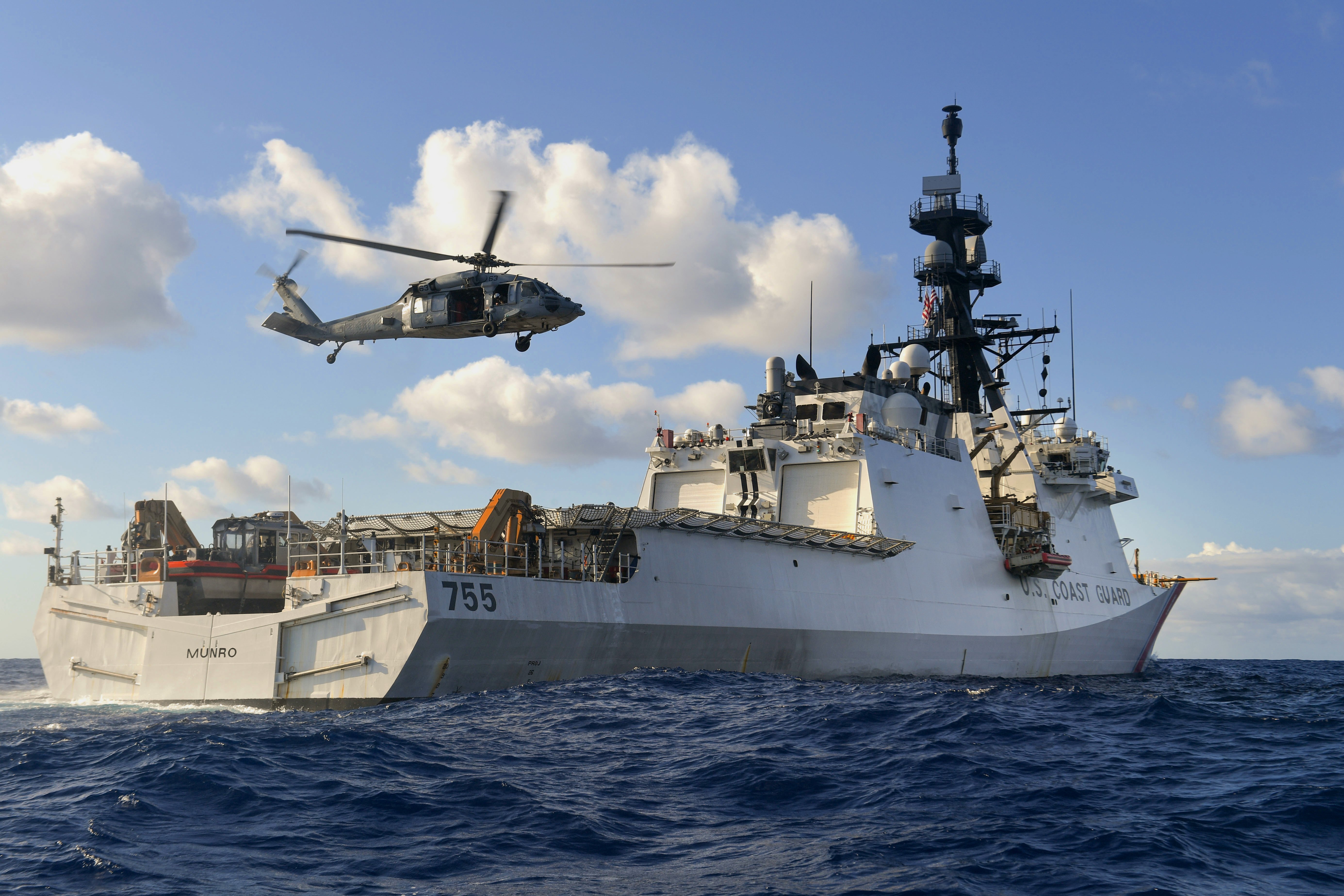 McAllister downplayed the exercise location, which was near the disputed Scarborough Shoal, stating that it was not intended to send a message to China. He added that one of the elements the Coast Guard is working on is capacity and capability building for the Philippine Coast Guard and maritime enforcement agencies to conduct sustained operations in waters beyond their littorals.

“And so, I’m not going to say that activity near the Scarborough Shoals was necessarily intended to send a message; but when you think about the Philippines’ claim for their waters, that opportunity to get them out further from shore, do maritime awareness, and – when appropriate – enforce laws and treaties within their Exclusive Economic Zone, it simply requires that we get them further from shore,” McAlliser said.

He also noted the U.S. Coast Guard does cooperate with China on areas of mutual interest between the two countries, though there is not much cooperative activity in the South China Sea. But both countries continue to cooperate in the North Pacific, specifically as it relates to high seas fishing and the enforcement of various treaties and conventions for which both the U.S. and China are signatories.

“And we have enjoyed that relationship for a number of decades now, and it has been successful. We have largely eliminated the use of high seas drift nets, as an example, on the high seas, which had a very significant impact on a lot of migratory fish species,” he said.

In a July media call this year, U.S. Coast Guard Commandant Adm. Karl Schultz said National Security Cutter USCGC Bertholf (WMSL750) was deploying to the North Pacific and would cooperate under the North Pacific Coast Guard Forum comprising of Canada, China, Japan, South Korea, Russia, and the United States. Schultz also stated that the Coast Guard was still in the midst renegotiating a Memorandum of Agreement with China on shipriders, law enforcement who operate from naval ships, which had expired more than a year ago. 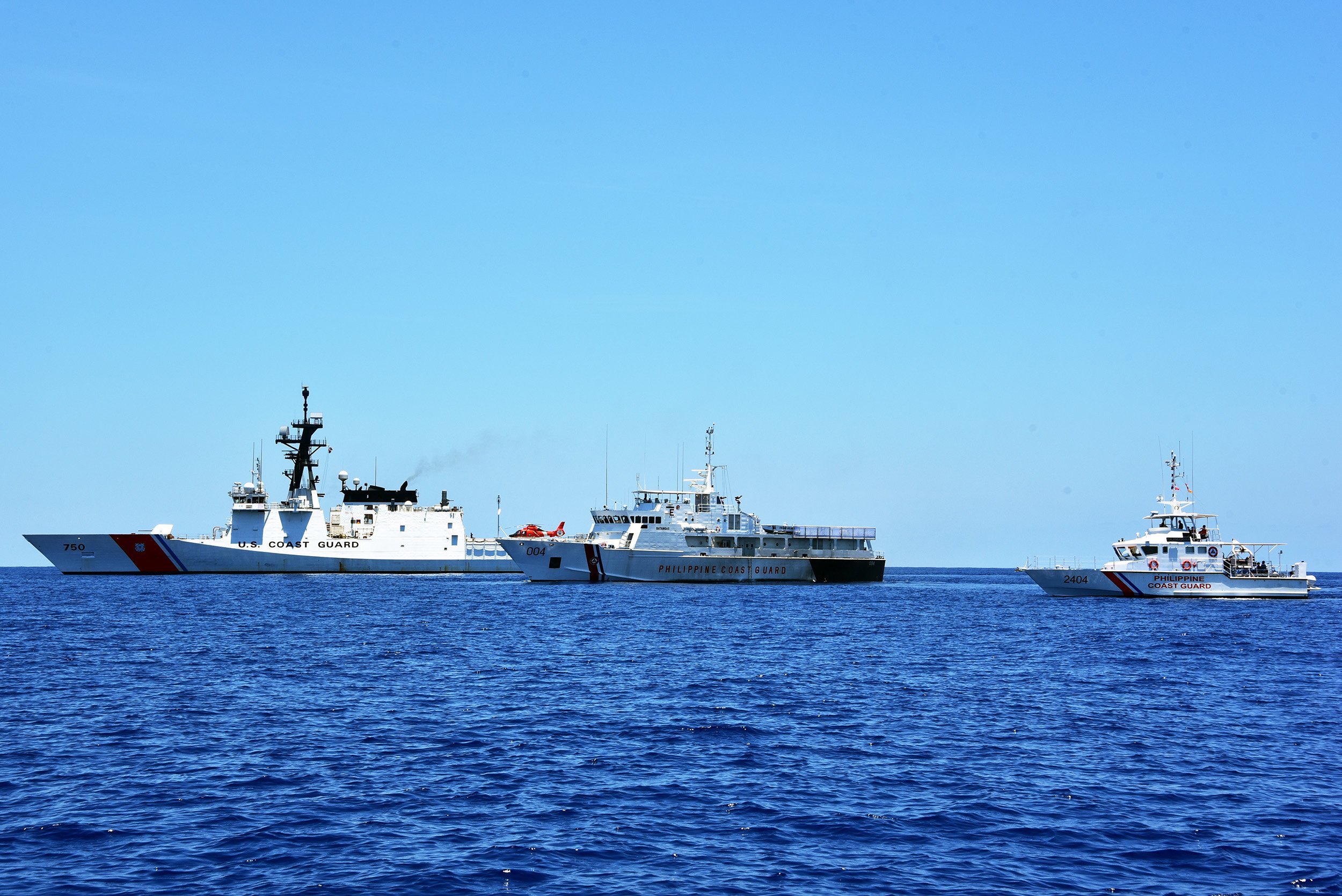 USCGC Bertholf (WMSL-750), left, moves in formation with the Philippine Coast Guard vessels Batangas, center, and Kalanggaman during an exercise on May 14, 2019. US Coast Guard

Asked about China’s new regulations for ships entering China’s territorial waters – which require ships provide notice and their maritime authorities with detailed information on the ship including its current position, next port-of-call and estimated time of arrival – McAllister said that based on media reports, the requirements for ships on innocent passage to the South China Sea seem to run directly counter to international agreements and norms. “If our reading is correct, these are very concerning, and that’s because they begin to build foundations for instability and potential conflicts if those are enforced,” he said.

McAllister also provided an update on Coast Guard operations in the Pacific Islands since the July commissioning in Guam of Coast Guard Fast Response Cutters Myrtle Hazard (WPC 1139), Oliver Henry (WPC 1140) and Frederick Hatch (WPC 1143), and the re-designation of Coast Guard Sector Guam to Coast Guard Forces Micronesia Sector Guam. Since then, the Coast Guard has launched the most recent wave of what it calls Operation Blue Pacific, which is a multi-mission, multi-location effort in coordination with key partners amongst Pacific Island nations to include using various Coast Guard cutters to detect, deter and suppress illegal, unreported, unregulated fishing.

“We carry that out often times through shiprider agreements; we counter transnational shipment of illegal narcotics. We conduct port security assessments; and we provide what we call maritime domain awareness through long-range aircraft sorties,” he said.

During a July media call, Schultz said operations in that region will be enhanced with the replacement of HC-130Hs operating at Coast Guard Air Station Barbers Point in Hawaii because the new HC-130Js having longer range, more endurance and better sensor capabilities. They can also fly directly to Guam without refueling, in contrast to the HC-130H. Forward deployments to Guam would be in relation to specific tasking and missions rather than a regular, rotational, presence, as has already been the case in the past.

McAllister also remarked on the impact of COVID-19 has had on Coast Guard activities and engagement, saying it has limited the face-to-face and human engagement that the service and its partners have found valuable. Mitigations efforts through virtual engagements were used to bridge that gap.

“But time will tell as to whether we’ve been effective in doing that. I would say there’s certainly – from my perspective as a regional commander, I’m looking forward to when travel restrictions begin to be eased and I can go and look people eye-to-eye and kind of re-form those critical partnerships,” he said.

McAllister added that COVID also made putting ships to sea and keeping them at sea difficult.

“Getting a crew ready for sea – including quarantines, vaccinations, and other measures to ensure that they’re protected – has been difficult,” he said. “And then staying at sea for months at a time in order to carry out our missions has taken a toll on our crews. And so, we’re hopeful that our partnerships allow us to emerge from COVID as quick as possible.”