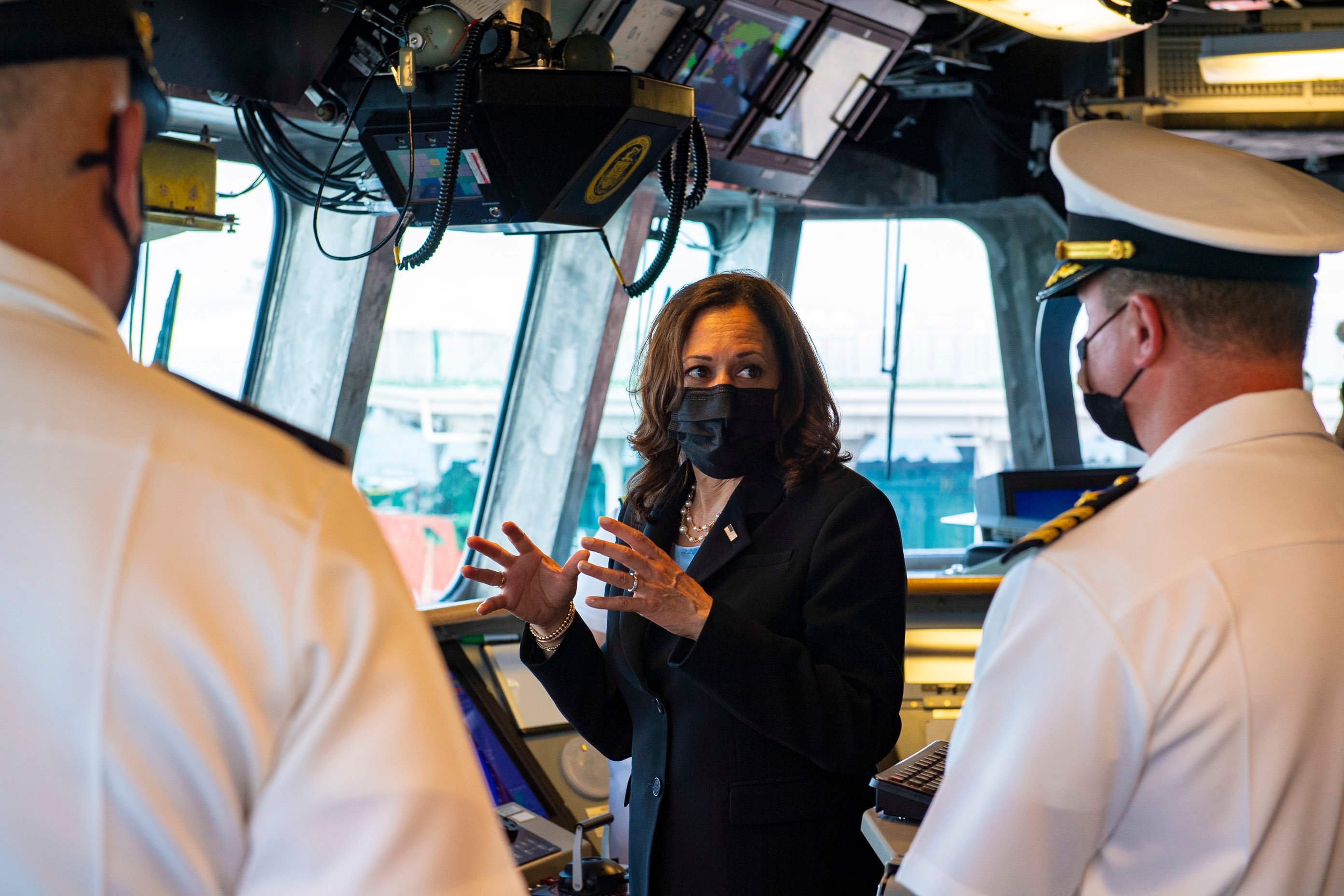 KUALA LUMPUR – The United States will stand with its allies and partners in the Indo-Pacific region against any threats to the rules-based order, Vice President Kamala Harris said during a swing through the region this week.

Harris said the U.S. will support allies facing any threats to their sovereignty and she criticized China’s actions in regard to its claims in the South China Sea.

In a speech on Aug. 24 in Singapore, Harris noted her visit the day prior to USS Tulsa (LCS-16) at Changi Naval Base, describing the ship as a symbol of the deep and enduring security partnership between the United States and nations in the region and a statement of America’s security commitment to the Indo-Pacific.

The vice president also reiterated the U.S. vision of a free and open Indo-Pacific. “And yet in the South China Sea, we know that Beijing continues to coerce, to intimidate, and to make claims to the vast majority of the South China Sea. These unlawful claims have been rejected by the 2016 arbitral tribunal decision. And Beijing’s actions continue to undermine the rules-based order and threaten the sovereignty of nations,” Harris said.

“The United States stands with our allies and partners in the face of these threats,” she added, noting that U.S. engagement in Southeast Asia and the Indo-Pacific is not against any one country or designed to make anyone choose between countries, but instead is meant to advance the American vision for its participation and partnership in the region.

In a press conference in Vietnam on Aug. 26, Harris reiterated the U.S position, stating that the U.S. will continue its security cooperation in support of Vietnam and will continue to work with Vietnam to push back against threats, including to freedom of navigation and the rules-based international order. She also said the U.S. will speak up “ when there are actions that Beijing takes that threaten the rules-based international order,” like its activities in the South China Sea.

The U.S. and Vietnam affirmed the continuation of its security partnership and the Vice President-President discussed with Vietnamese leaders the increasing partnership between the U.S Coast Guard and Vietnam Coast Guard, according to a White House fact sheet on Harris’s visit to the country. The Coast Guard partnership included the possible transfer of a third U.S. Coast Guard high-endurance cutter, subject to Congressional approval. The U.S. has already transferred two Hamilton-class cutters to Vietnam – the former USCG Morgenthau (WHEC-722) and former USCG John Midgett (WHEC-726) – which are now in service with the Vietnam Coast Guard as CSB 8020 and CSB 8021, respectively. USCG Douglas Munro (WHEC-724) remains the only one of the 12 Hamilton-class cutters that has not already been transferred or earmarked for transfer.

U.S. Coast Guard Commandant Adm. Karl Schultz in a July media call said Vietnam will remain a key regional ASEAN, or Association of South East Asian Nations, partner for the Coast Guard and that the service would have a reinforcing role in capacity building for the Vietnam Coast Guard, which is seeking to build up its capability. 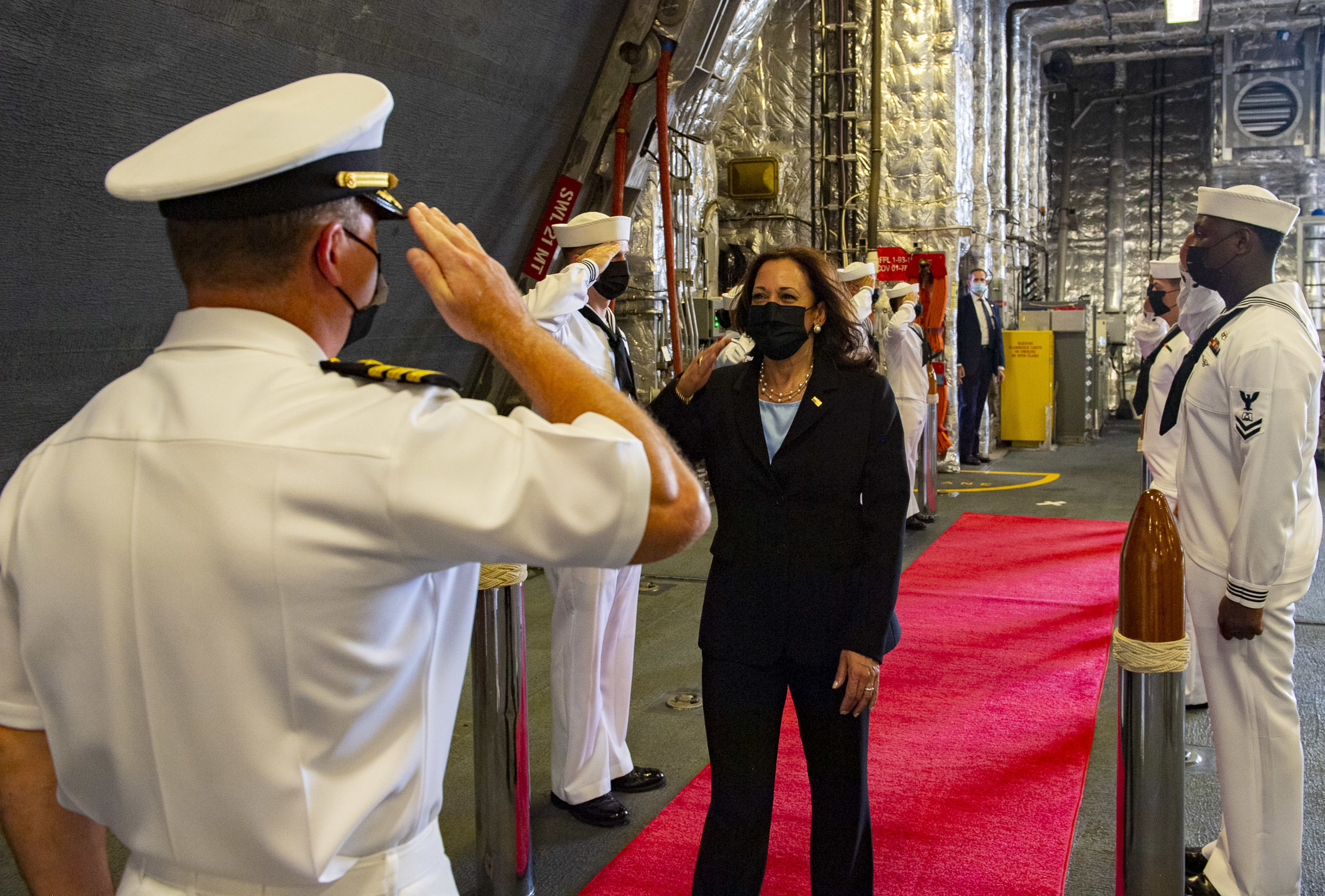 The seven-day visit by the Vice President to Singapore and Vietnam builds upon Defense Secretary Lloyd Austin’s previous tour to the region, when he visited Singapore, Vietnam and the Philippines. The tours come as the Biden administration seeks to assure Indo-Pacific countries that the new administration is committed to the region.

It also comes as the Biden administration nears its deadline for withdrawing from Afghanistan, a decision Harris had to defend during media conferences in her tour. Singapore Prime Minister Lee Hsien Loong gave support for the U.S decision during a joint press conference with Harris on Aug. 23. Lee said he had told Harris that Singapore understood Biden’s decision and that “post-Afghanistan in the longer term, what matters is how the US repositions itself in the Asia Pacific, engages the broader region and continues the fight against terrorism, because that will determine the perceptions of the countries, of the U.S. global priorities, and of its strategic intentions.” Lee also offered a Republic of Singapore Air Force (RSAF) A330 Multi-Role Transport Tanker to assist in the evacuation from Afghanistan. The offer was accepted and the aircraft departed on Aug. 26 for Qatar, where it will transport evacuees brought there to Germany or other receiving countries.

Tulsa was in Singapore following its participation in the 20th annual Southeast Asia Cooperation and Training (SEACAT) exercise held from Aug. 10 through 20. The exercise took place throughout the region, with a maritime operations center in the Information Fusion Center in Singapore, which served as a centralized hub for crisis coordination and information sharing in the tracking of contracted merchant vessels simulating suspicious vessels of interest throughout Southeast Asian waters. Participating countries worked with all available maritime domain awareness (MDA) tools to provide cueing and contact information to another country’s operations center and to maritime patrol reconnaissance aircraft and surface assets to observe, intercept and board.