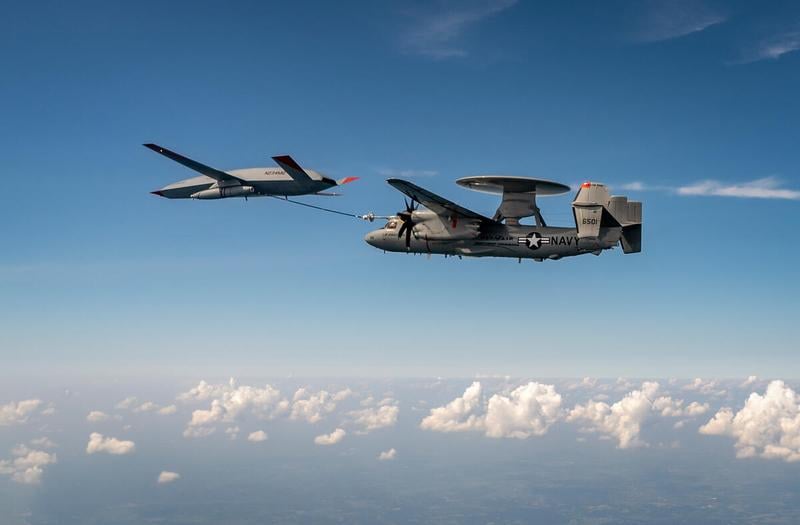 Boeing’s prototype for the Navy’s first unmanned aerial tanker successfully refueled its second aircraft type in a test over Illinois, the service announced on Thursday.

The MQ-25 T1 prototype topped off an E-2D Advanced Hawkeye flown by the in a series of test flights from MidAmerica Airport in Mascoutah, Ill., just outside of St. Louis.

“During the six-hour flight, Navy E-2D pilots from Air Test and Evaluation Squadron Two Zero (VX) 20 approached T1, performed formation evaluations, wake surveys, drogue tracking and plugs with the MQ-25 test asset at 220 knots calibrated airspeed (KCAS) and 10,000 feet,” according to a release from Naval Air Systems Command.
“This test allows the program to analyze the aerodynamic interaction of the two aircraft. The team can then determine if any adjustments to guidance and control are required and make those software updates early, with no impact to the developmental test schedule.”

The promise for the E-2D, now equipped with an aerial refueling capability, is to stay aloft longer for better awareness around the carrier strike group.

The Wednesday flight follows a June test between the prototype and a Super Hornet to prove the initial concept that the T1 – built by Boeing in 2014 as the company’s bid for the canceled Unmanned Carrier Launched Airborne Surveillance and Strike (UCLASS) program – could handle the refueling mission. The prototype initially flew with the refueling configuration in December of 2019.

“T1 testing will continue over the next several months to include flight envelope expansion, engine testing, and deck handling demonstrations aboard an aircraft carrier before the MQ-25 engineering, manufacturing and development aircraft are delivered next year,” NAVAIR said in a statement.

The goal for the program is to deliver up to 15,000 pounds of fuel up to 500 nautical miles from the carrier, USNI News reported in 2017. Eventually, the Navy’s plan is to integrate the MQ-25As with the C-2 and E-2D communities as part of the Navy’s larger manned-unmanned teaming construct for UAVs.

For now, the mission for the MQ-25A is to relieve the Super Hornet fleet of the aerial refueling burden which can account for 20 to 30 percent of flight hours for an operational air wing, USNI News understands.

The Navy is considering expanding the mission set to include information, surveillance and reconnaissance roles more in line with the original vision for the UCLASS program.

In Thursday’s statement, NAVAIR played up the ISR role for the aircraft to be, “the eyes and ears of the fleet will now be able to provide up-to-the-minute information from deep within theater to facilitate rapid-decision making by carrier strike group leadership,” reads the statement.

The first engineering developmental models are scheduled to arrive next year as part of a 2018 award to Boeing for $805-million contract to build the first four MQ-25As.