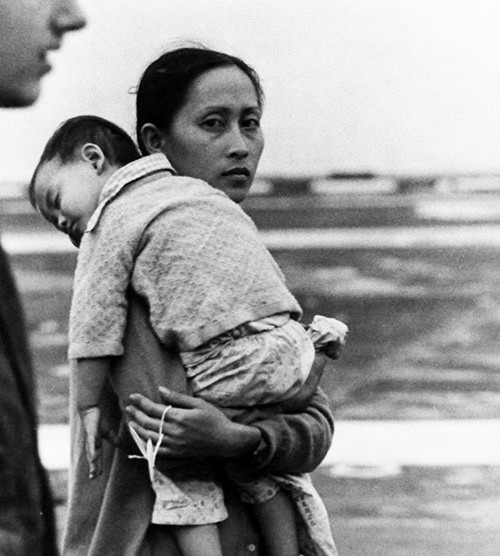 A Vietnamese woman, carrying her son, is given a numbered tag as she arrives onboard USS Hancock (CV-19) on April 29, 1975. US Marine Corps Photo

The Pentagon acknowledged on Monday the evacuation of Americans and other U.S. diplomatic personnel from Afghanistan and Afghan emigrants is a “non-combatant evacuation operation,” a mission for U.S. forces to safeguard the exit of civilians and other non-combatants from a country.

Over the weekend, images from the rapid decline of security in Afghanistan – as Taliban forces spread into provincial capitals and, this weekend, into the Afghan capital of Kabul – lent comparisons to the 1975 evacuations in then-South Vietnam’s capital of Saigon.

Afghanistan becomes another in a long line of countries where U.S. service members have been ordered in to provide security and help in the evacuations, a joint mission run by the Department of State and the Department of Defense and guided by Joint Publication 3-68. That document describes a NEO as: “conducted by the Department of Defense (DOD) to assist in evacuating US citizens and nationals, DOD civilian personnel, and designated persons (host nation [HN] and third country nationals [TCNs]) whose lives are in danger from locations in a foreign nation to an appropriate safe haven, when directed by the Department of State (DOS). US policy is contained in a memorandum of agreement between DOD and DOS, titled ‘Memorandum of Agreement between the Departments of State and Defense on the Protection and Evacuation of US Citizens and Nationals and Designated Other Persons from Threatened Areas Overseas.’”

But every NEO mission is different.

Some operations are limited while others are broader in the scope of the evacuations. In some cases, the political and security environment improves and enables the return of civilians; in other cases, the exit is permanent, at least in the near-term. Some NEOs involve the evacuation of the U.S. embassy and Americans, but not all. And in other NEOs, U.S. troops support the evacuations of local foreigners to safer ground. Some NEOs end up with U.S. troops deployed but no evacuation subsequently required.

Past operations have been missions to reinforce the embassy, usually with additional Marines for security. And others are evacuation missions. The latest was in March 2016, when the Department of Defense ordered several hundred U.S. military families to leave Incirlik Air Base in Turkey due to the degrading security environment there. The largest so far was the evacuation of more than 20,000 U.S. service members and their families from Subic Bay Naval Base, Cubi Point Naval Air Station and Clark Air Base after the 1991 volcanic eruption of Mount Pinatubo in the Philippines.

Here’s a look at some of the NEO missions that U.S. military forces conducted in support of the U.S. State Department: 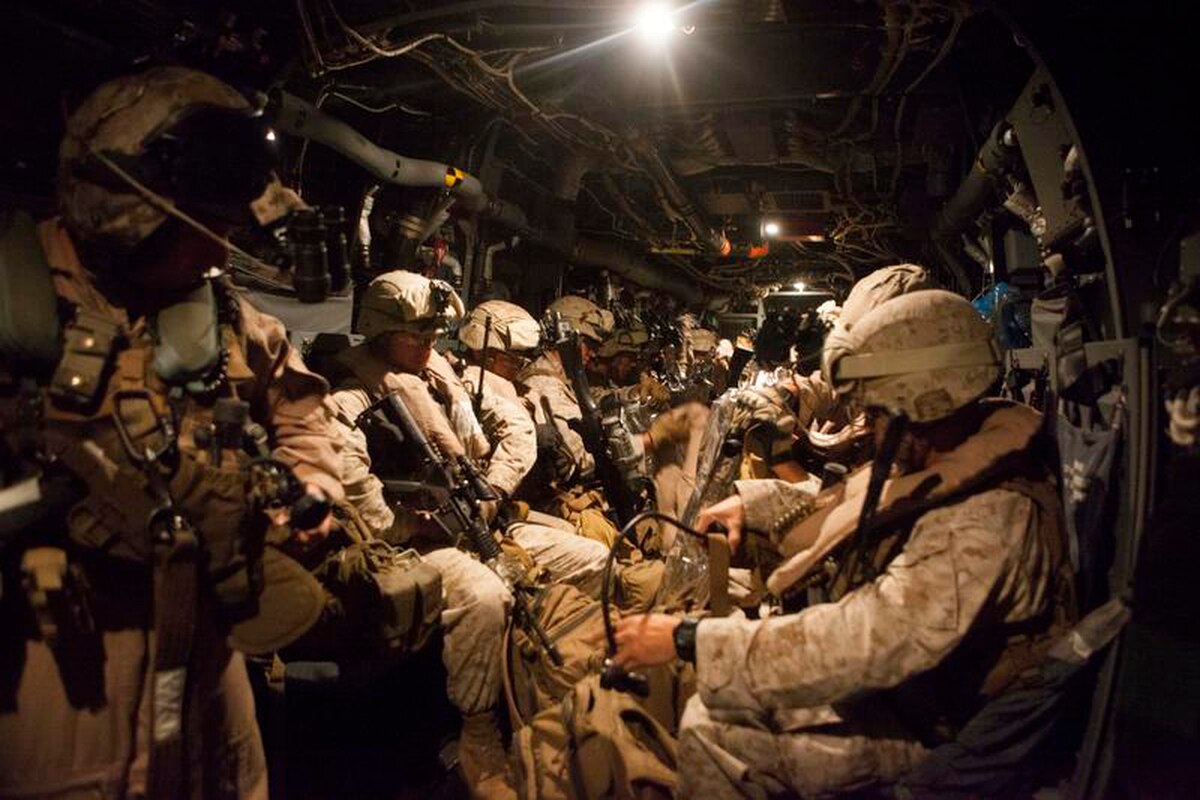 Amid the deteriorating security situation there, several hundred Americans and others were evacuated from the U.S. embassy in Libya’s capital Tripoli by U.S. forces that included Marine Air-Ground Task Force-Crisis Response and MV-22B Osprey tiltrotor aircraft. 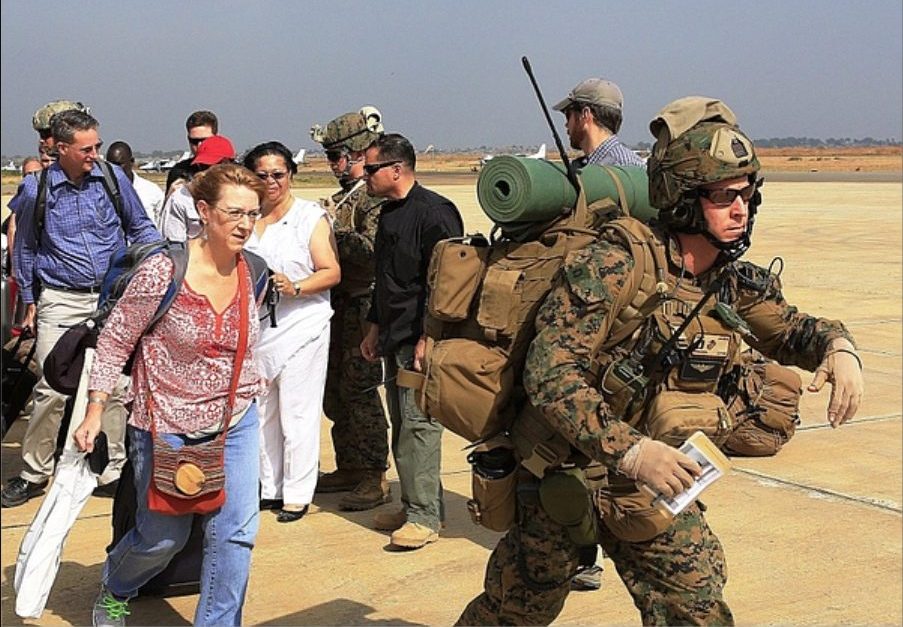 Marines escort civilians Juba, South Sudan, during an evacuation of personnel from the U.S. Embassy, on Jan. 3, 2014. US Marine Corps Photo 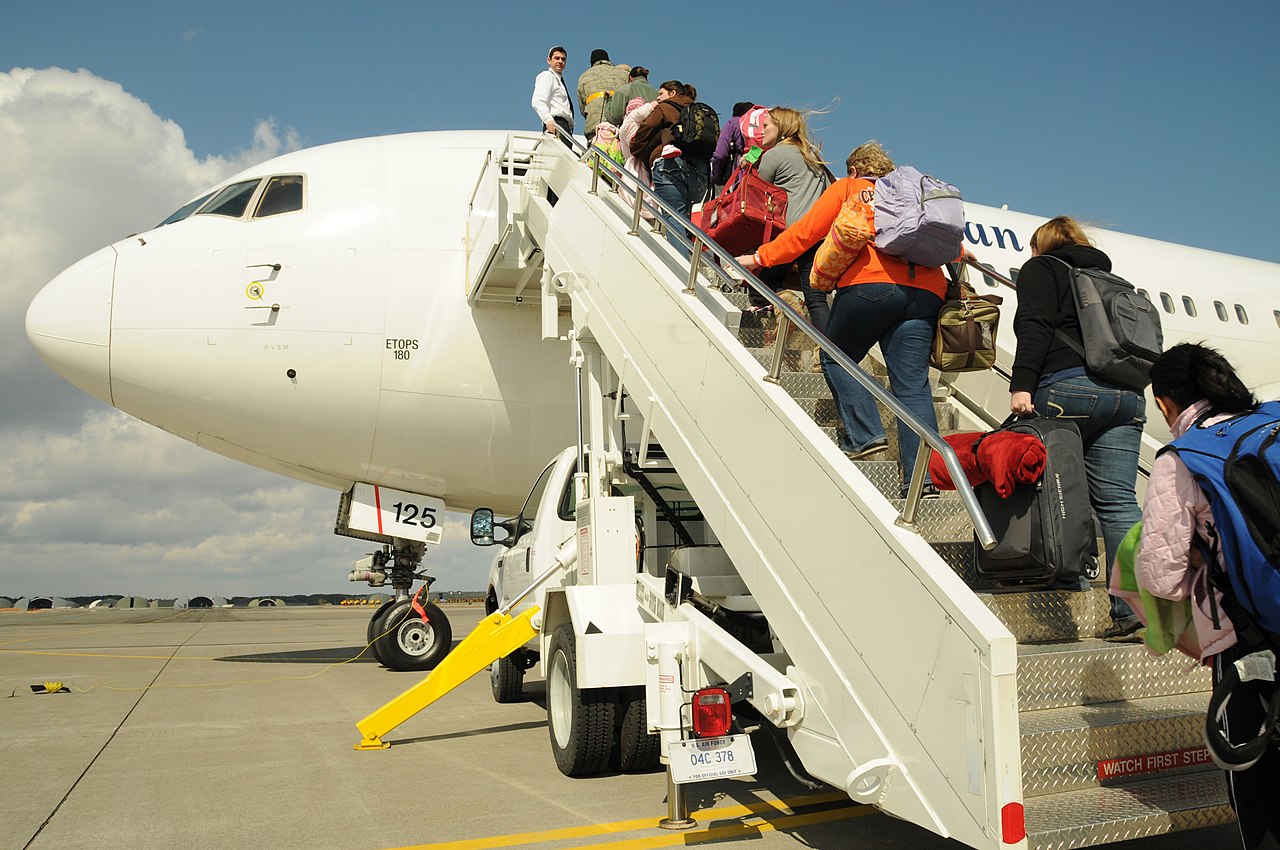 In the aftermath of a devastating earthquake, tsunami and damaged nuclear power plant, the U.S. military helped in the voluntary evacuations of several thousand military family members and others. 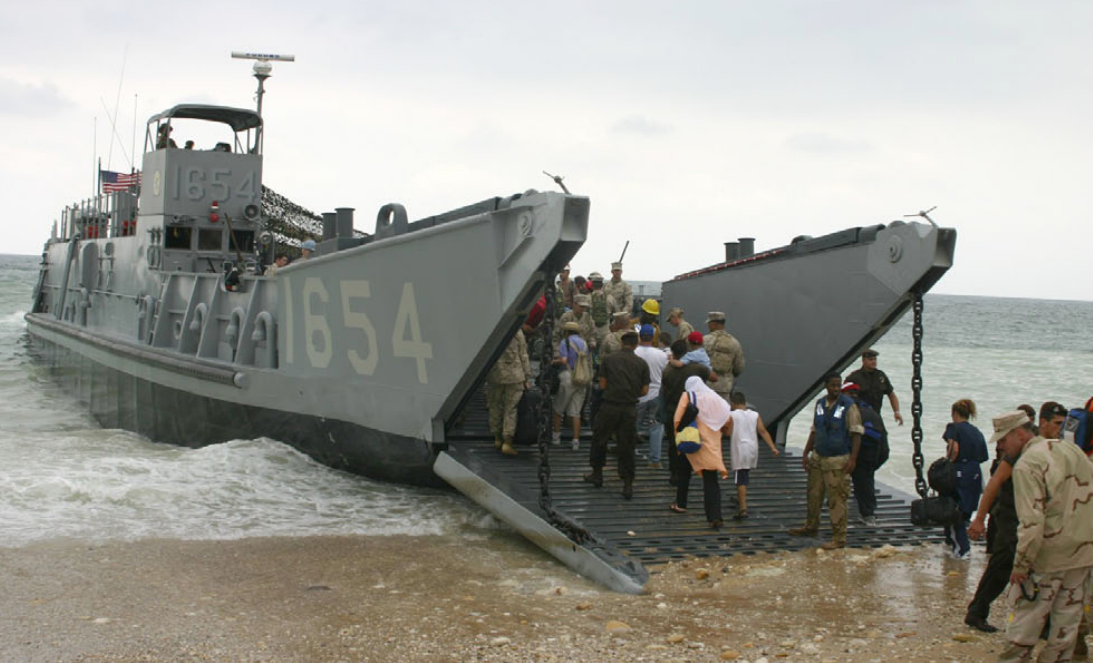 Civilians board a Navy LCU as part of the evacuation of Lebanon in 2006. DoD Photo

Aircraft along with contracted commercial vessels, Navy ships and units, including the Iwo Jima Expeditionary Strike Group and 24th Marine Expeditionary Unit, evacuated almost 15,000 U.S. citizens from Lebanon and its capital Beirut to Cyprus and Turkey as fighting intensified between Hezbollah militants and Israeli forces. It was one of the largest NEOs since Vietnam. 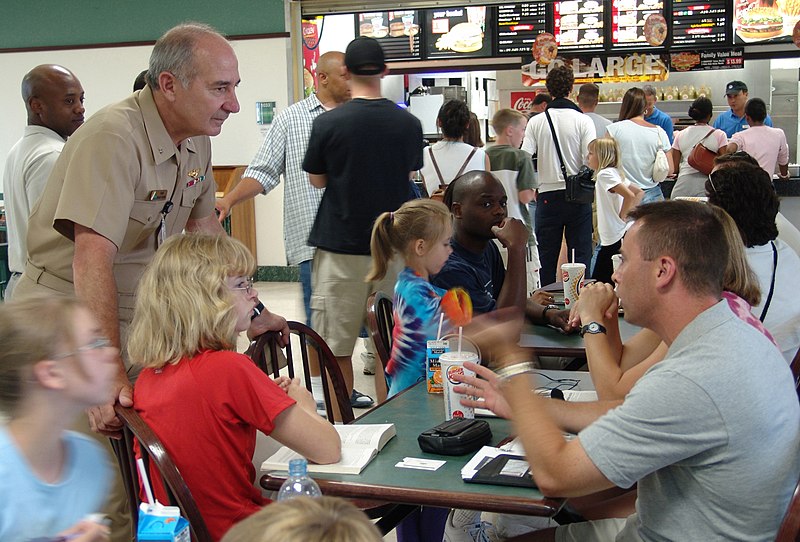 Rear Adm. Dan Mastagni, Vice Commander Navy Region Europe speaks with one of several families evacuated from Bahrain during their brief stay in the airport aboard Naval Support Activity, Naples, Italy in 2004. US Navy Photo

A small detachment from 4th Marine Expeditionary Brigade flew to help secure the U.S. embassy in Port-au-Prince and evacuate Americans as the security environment worsened in the island-nation.

The U.S.-led invasion of Iraq prompted U.S. military officials to evacuate U.S. personnel and families at Incirlik Air Base in neighboring Turkey. 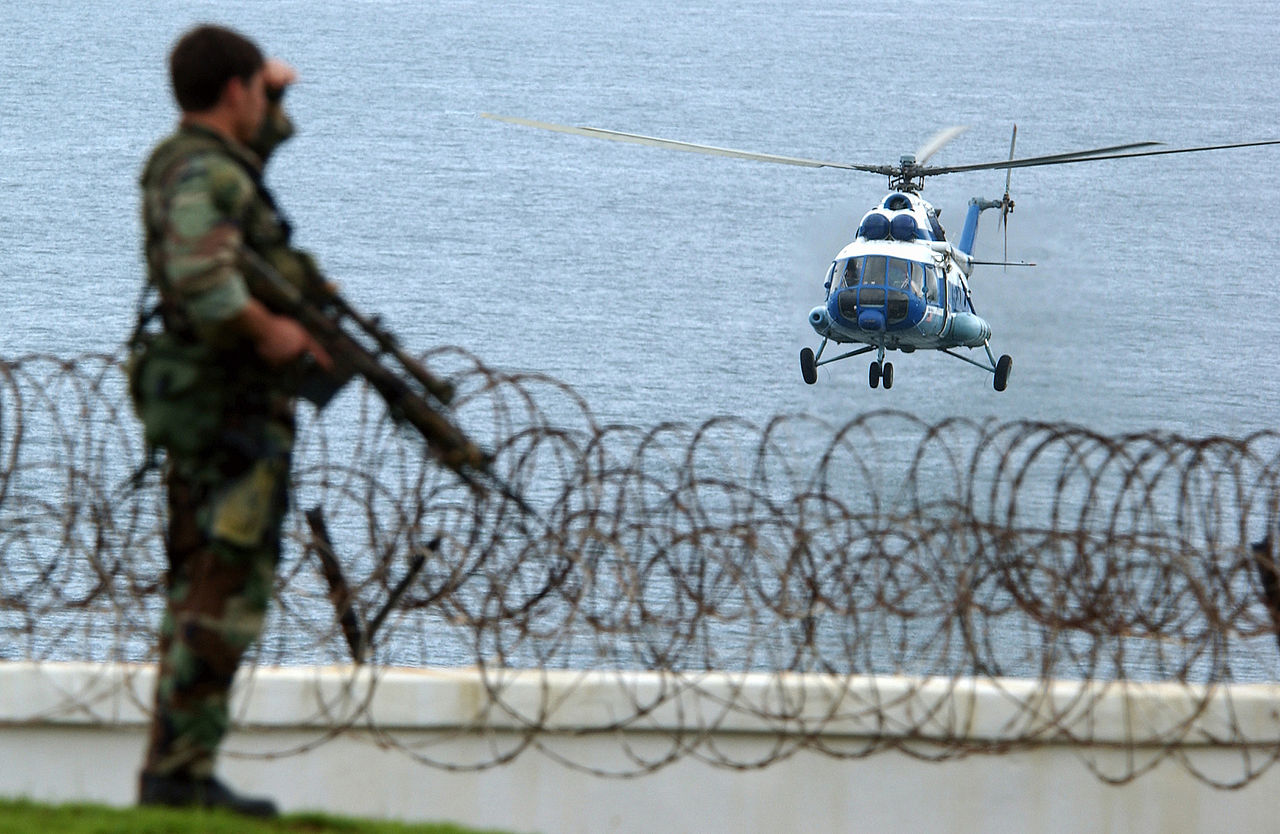 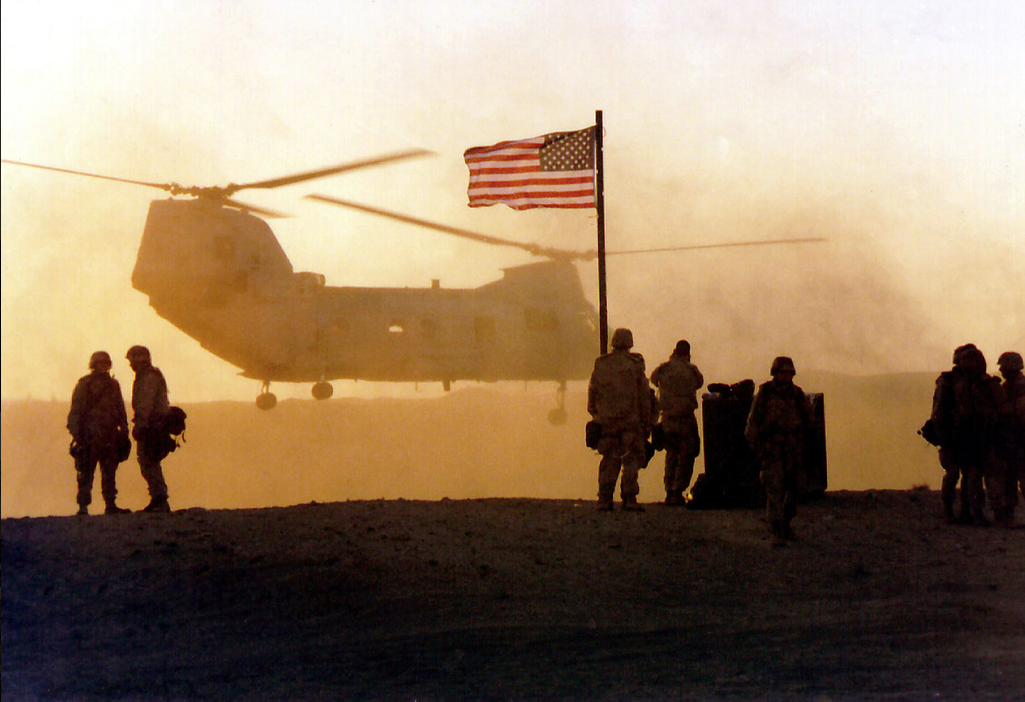 31st Marine Expeditionary Unit (MEU) get a ride back to the former USS Belleau Wood LHA-3) in 1998. US Navy Photo

The 31st MEU helped evacuate about 90 Americans and diplomats from the U.S. embassy in Kuwait amid the start of Operation Desert Fox, the U.S.-U.K. offensive against suspected Iraqi weapons-of-mass destruction facilities.

A group of 11th MEU Marines helped evacuate 172 people, including Americans, via KC-130 Hercules aircraft flying from the capital city Asmara to Jordan amid an ongoing Eritrea-Eithiopia conflict. 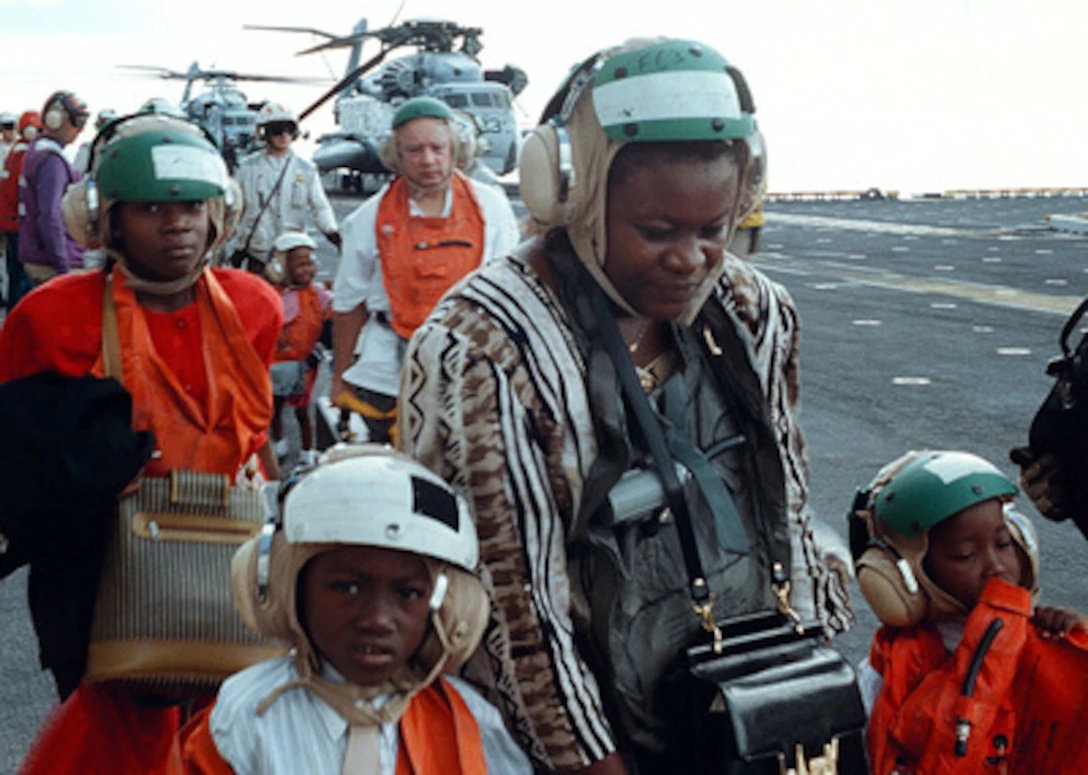 Evacuees from Freetown, Sierra Leone, are escorted across the flight deck of the USS Kearsarge (LHD 3), on May 30, 1997, during Operation Noble Obelisk. US Navy Photo

In a NEO called Operation Nobel Obelisk, USS Kearsarge (LHD-3) and the 22nd MEU moved some 2,500 Americans and foreigners. 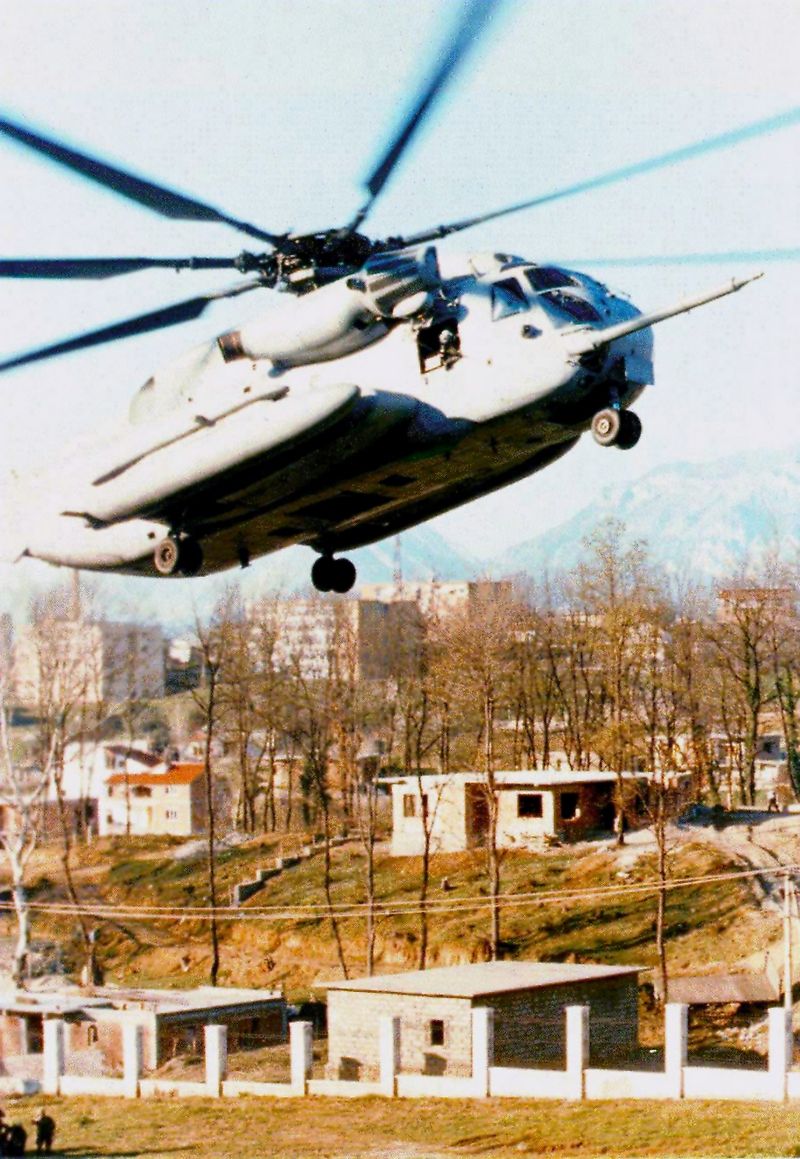 A CH-53E Super Stallion lands at the evacuation site inside the compound at the US Embassy in Tirana, Albania on March 18, 1997. US Navy Photo

The 22nd MEU deployed to the Central African Republic to assist the U.S. embassy in Operation Quick Response. 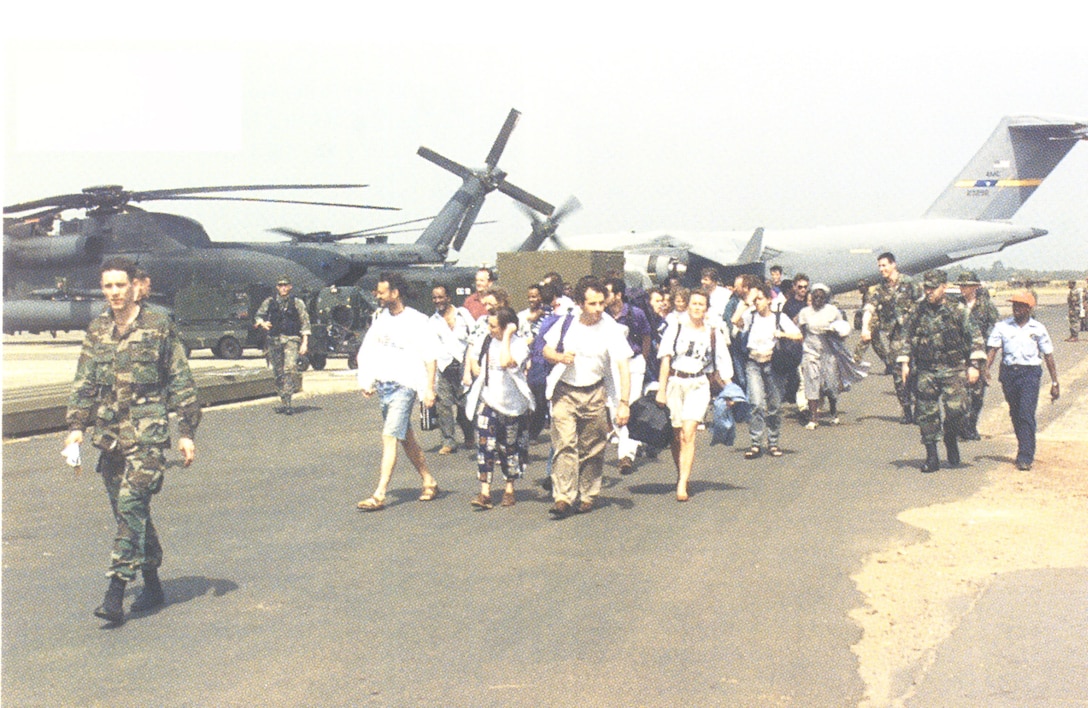 Elements of the 22nd MEU flew to Liberia’s capital Monrovia and helped protect the embassy and evacuate more than 2,000 Americans and others fleeing the country continuing to grapple with civil unrest in, Operation Assured Response. 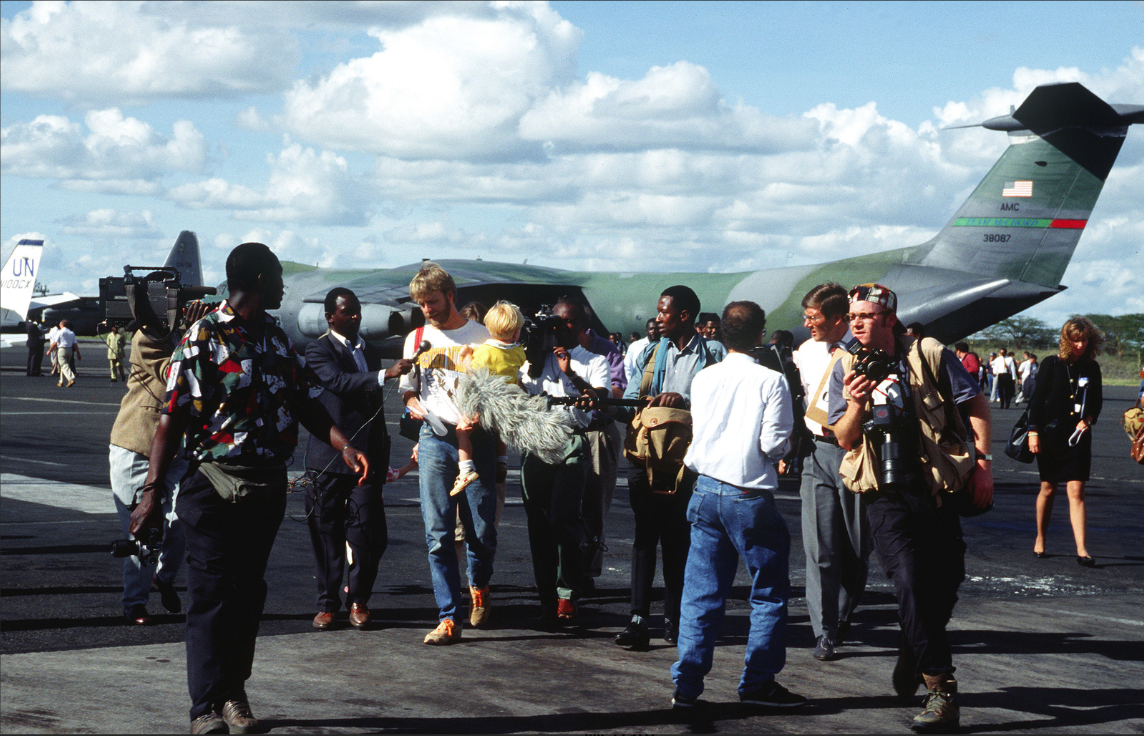 This C-141 flight from Bujumbura, Burundi took on passengers who were fleeing from fighting in Rwanda to Nairobi, Kenya on Jan. 4, 1994. US Marine Corps Photo

Some Marines with the 11th MEU along with Air Force personnel helped evacuate 230 people including Americans from Rwanda during Operation Distant Runner. 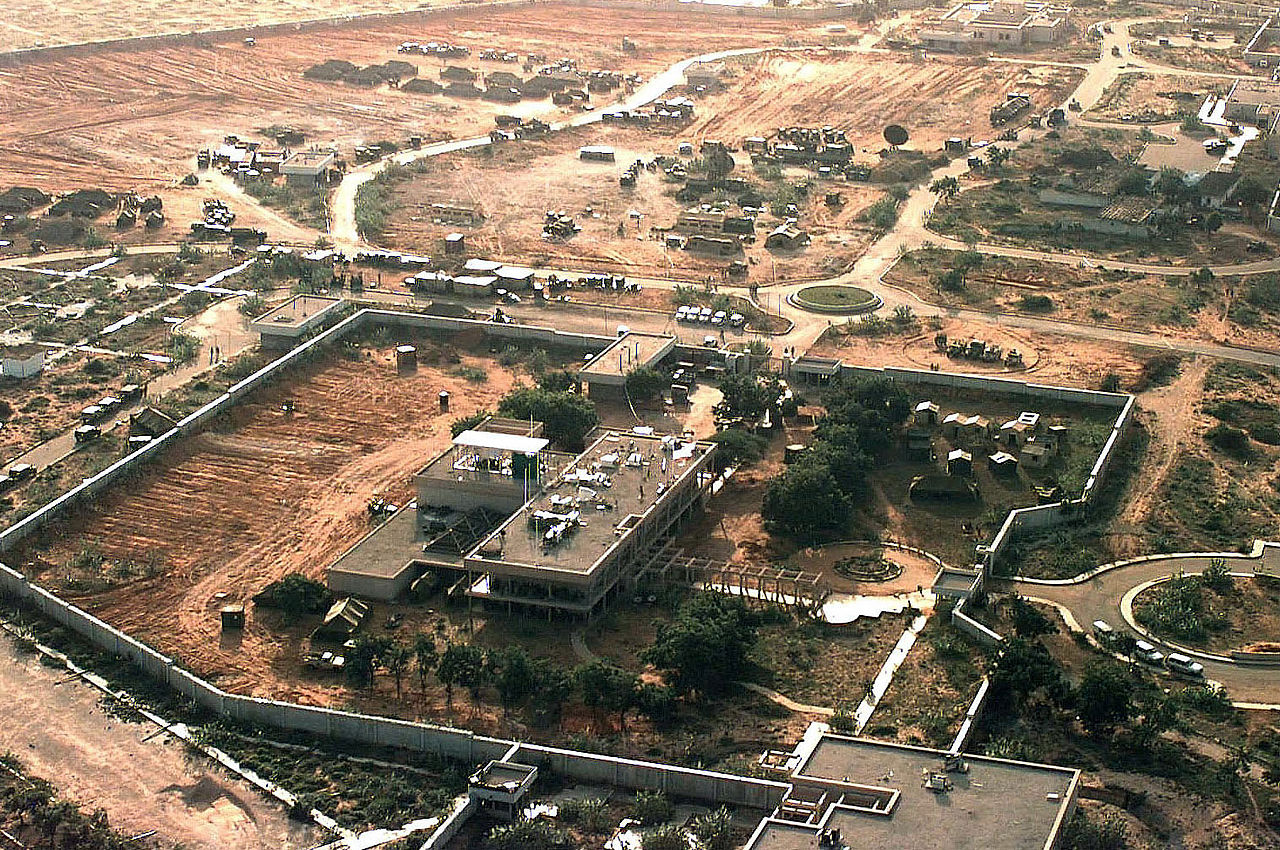 Embassy compound viewed in 1992, after it was re-occupied to serve as headquarters for Operation Restore Hope. DoD Photo 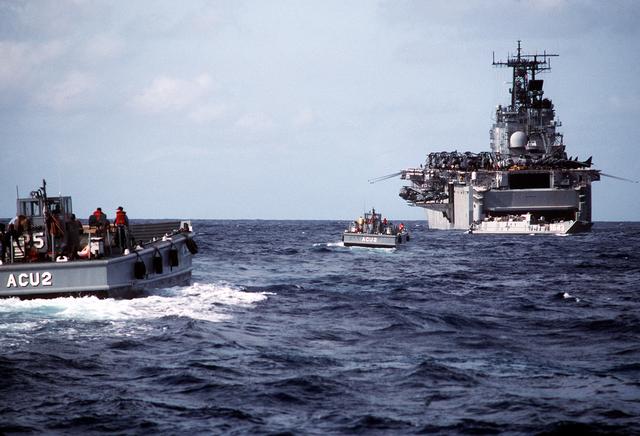 USS Saipan and landing craft during Operation Sharp Edge in 1990. US Navy Photo 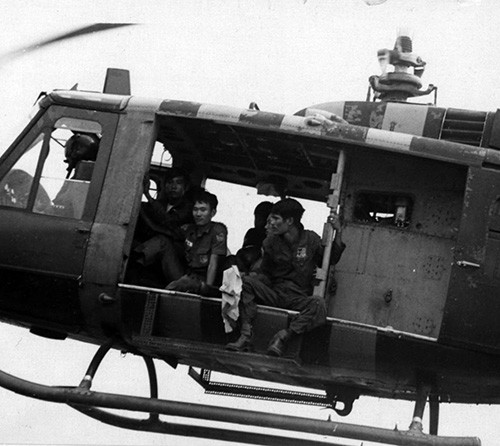 A South Vietnamese pilot lands his Huey helicopter on the deck of USS Hancock (CV-19) on April 29, 1975. US Navy Photo

Marines and sailors joined in Operation Frequent Wind, the final evacuation missions of Americans and others in the final days before South Vietnam fell to the communist North Vietnamese Army. Some 7,000 people were evacuated by military and civilian helicopters and thousands more by ships. 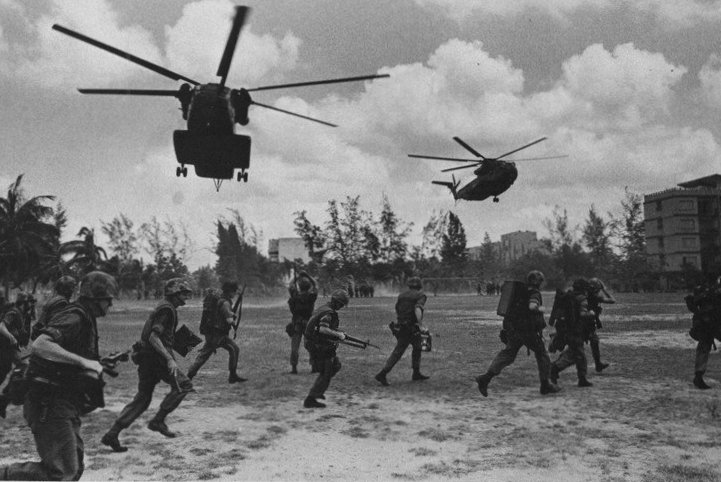 U.S. Marines assist in the evacuation of Phnom Penh, Cambodia, on April 12, 1975. US Navy Photo