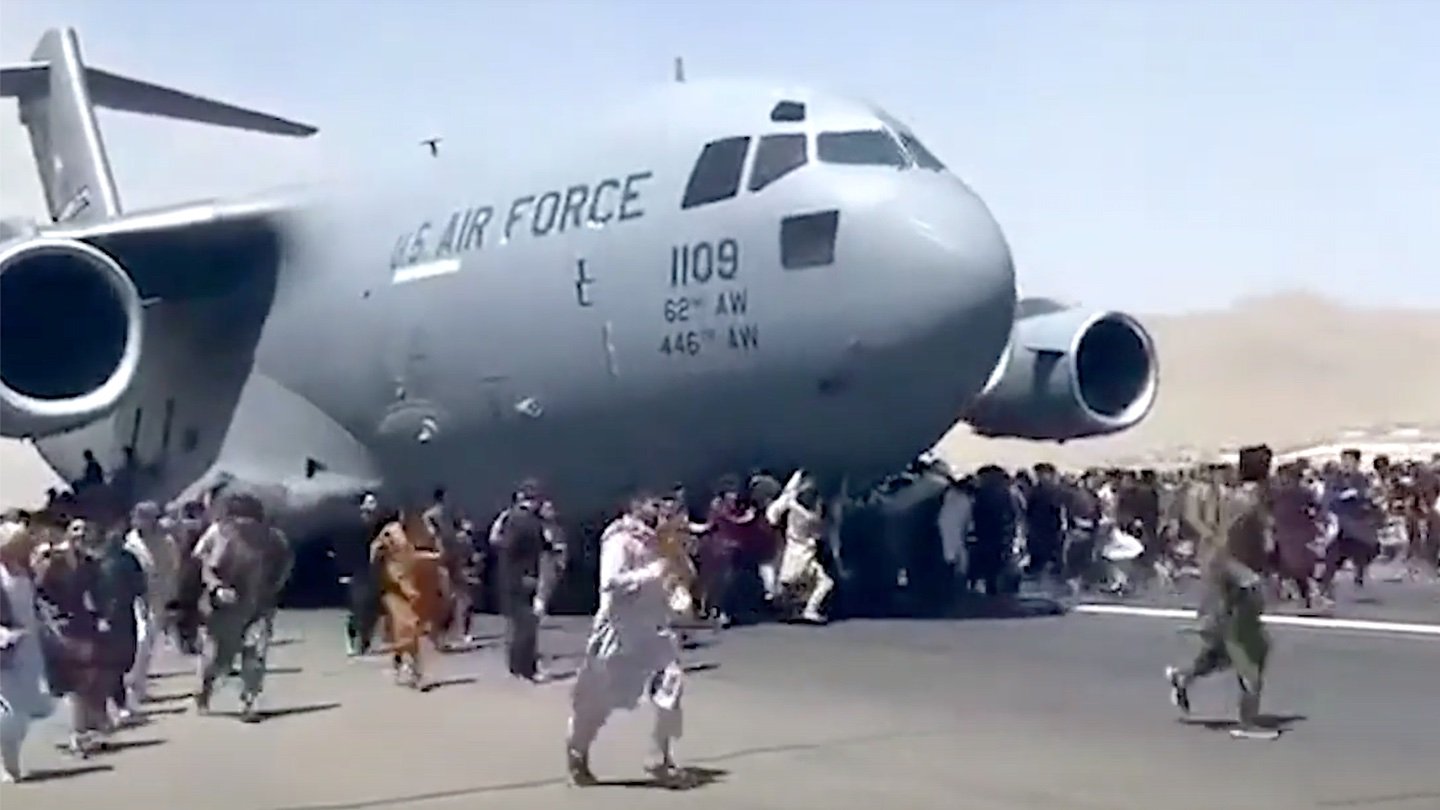 Afghanistan civililans attempt on the airfield as a C-17 attempts to take off from the Kabul airport.

This post has been updated with additional comments from President Biden and Pentagon officials.

The mass exodus of U.S. citizens and American allies from Afghanistan is now a military-assisted non-combatant evacuation operation as the security situation in the capital of Kabul has continued to devolve, a Pentagon spokesman said on Monday.

Last week, officials resisted calling the publicly unnamed operation a NEO – the first from a combat zone since the 2014 evacuation from Libya.

“This is a very narrowly focused temporary mission to facilitate the safe and orderly departure of additional civilian personnel from the State Department,” a Pentagon spokesman said last week.
“That is not the same as a non-combatant evacuation operation, where you’re moving a massive amount of people who aren’t necessarily U.S. government employees. It’s a different operation altogether.”

Now, after a weekend of unrest, the Pentagon is treating the departure as an evacuation. U.S. forces are attempting to gain control of the airport in Kabul while Taliban forces take control of the city. The admission is a sign, for the moment, that the U.S. is abandoning the diplomatic mission in Afghanistan.

“We are not at the embassy. The embassy is being closed,” Kirby told reporters. “The State Department announced that everybody’s out. That would include U.S. military [personnel]. So all our military presence right now is focused on the airport.”

In comments following an earlier version of this post, Pentagon officials said the embassy staff had relocated to the airport.

So far 2,500 U.S. troops – a mix of Marines, soldiers and airmen – are on the ground now, with 6,000 expected to arrive in total. The flow of forces into Kabul was limited in part by blocked runways, Kirby said.

As of Monday afternoon, the runways were reopened and the first group of Marines arrived at the airport via C-17, Army Maj. Gen. Hank Taylor told reporters on Monday afternoon.

In remarks to the press at the White House, President Joe Biden said the scope of the new mission would be limited.

“I was asked to authorize… 6,000 U.S. troops to deploy to Afghanistan for the purpose of assisting the departure of U.S. and allied civilian personnel from Afghanistan and to evacuate our Afghan allies and vulnerable Afghans to safety outside of Afghanistan,” Biden said.
“Over the coming days, we intend to transport out thousands of American citizens who have been living and working in Afghanistan. We will also continue to support the safe departure of civilian personnel of our allies that are still serving in Afghanistan.”

In addition to the Marines and the 82nd Airborne Division, a mix of 1,000 airmen and soldiers are also planned to arrive in Kabul to assist in the evacuation from a different base in the Middle East. Turkish troops are also assisting with securing the airport.

“Over the next 24 hours, we expect additional forces to arrive from both the 82nd Airborne Division and battalions from our Marine Expeditionary Unit that should bring our force level to over 3,000,” Kirby said.

U.S. defense officials won’t identify the Marine units, but the closest MEU to Afghanistan is the 24th embarked on the Iwo Jima Amphibious Ready Group in the North Arabian Sea. The Marines also maintain a Special Purpose Marine Air-Ground Task Force based in Kuwait that is designed to deploy short notice throughout U.S. Central and Africa Commands.

Kirby told reporters on Monday that ship-borne Marines had transferred to Kuwait from the Iwo Jima ARG in anticipation of a NEO.

Under U.S. doctrine and international law, forces deployed in a NEO may defend an evacuation, but not move offensively against threats. This distinguishes the NEO mission from U.S. support of Afghan forces, which used airstrikes and shared intelligence to combat the Taliban offensive.

Taylor said the U.S. commander on the ground retained the option to order airstrikes in support of the operation.

As of Monday afternoon, U.S. forces had taken control of air traffic control at the airport and had cleared the runways. Kirby confirmed that two Afghans not affiliated with the Taliban were killed in two separate exchanges of gunfire. Videos that have emerged online show a U.S. Air Force C-17 takeoff on a runway crowded with civilians.

“The video that we saw this morning of all those people on the tarmac running along with the C-17 – it’s extraordinary video,” Kirby said. “There’s no question about that. And it’s troubling. And it certainly gives us all pause and concern here, which is why commanders are working so hard to secure the field and to make it a more safe environment.”

One video shows people attempting to climb aboard the wheel well of the aircraft and falling to their deaths.

Once control of the airfield is reestablished, Kirby said the intent was to move thousands of evacuees out via C-17s, which can hold about 300 people in a passenger configuration. Defense One reported one flight with a record-breaking 640 Afghans aboard.