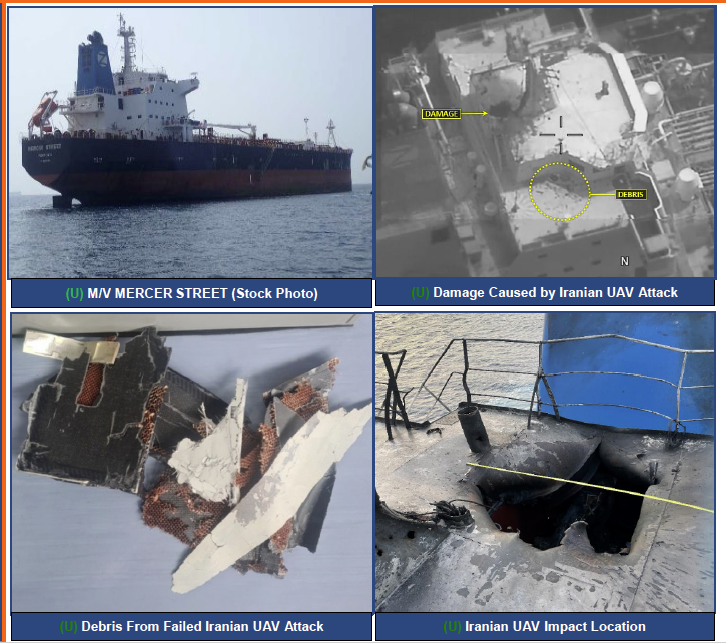 A one-way, explosive-laden drone made in Iran attacked an Israeli-operated merchant tanker last week off the coast of Oman, U.S. Central Command said on Friday.

The delta-wing drone, similar in design to long-range unidentified, unmanned “kamikaze” drones developed for the Iranian Revolutionary Guard Corps, flew into the pilothouse of the Merchant tanker Mercer Street on July 30, killing two crewmembers, according to a report from CENTCOM.

“This [unmanned aerial vehicle] was loaded with a military-grade explosive, and caused the death of two crewmembers; the master of the ship, a Romanian citizen, and a United Kingdom national who was part of the security detail,” reads a summary of the report.

“The explosive detonation following the UAV impact created an approximately 6-foot diameter hole in the top side of the pilothouse and badly damaged the interior. Explosive chemical tests were indicative of a Nitrate-based explosive and identified as RDX, indicating the UAV had been rigged to cause injury and destruction.”

The tanker was attacked in the Indian Ocean about 152 nautical miles northeast of Duqm, Oman, and about 21 nautical miles off the coast of Oman, according to U.K. Maritime Trade Operations.

A Navy Explosive Ordnance Disposal team that embarked Mercer Street from USS Ronald Reagan (CVN-76) after the fatal attack recovered pieces of a drone from two earlier failed attempts to attack the merchant tanker. They matched a drone that the IRGC debuted publicly earlier this year as part of their Great Prophet exercise series and were thought to be used in Sept. 14, 2019, attacks on the Saudi Arabian Aramco oil fields. Yemen-based Houthi rebels claimed responsibility for the attacks on Abqaiq and Khurais. However, U.S. and Saudi intelligence officials believed the attacks originated in Iran, The Wall Street Journal reported.

“Explosives experts were able to recover several pieces of [a] third UAV, including a vertical stabilizer (part of the wing) and internal components which were nearly identical to previously collected examples from Iranian one-way attack UAVs,” reads the statement from CENTCOM.

“The distance from the Iranian coast to the locations of the attacks was within the range of documented Iranian one-way attack UAVs. Following an on-scene analysis, some of the material was transferred to U.S. Fifth Fleet headquarters in Manama, Bahrain and subsequently to a U.S. national laboratory for further testing and verification.”

The U.S. shared results with Israeli and U.K. explosive experts who agreed with the American assessment.

The Iranian delegation to the U.N. denied any responsibility for the attacks and blamed Isreal for, “adventurism and destabilizing activities.”

The assessment from the explosive experts led to a condemnation from Canada, France, Germany, Italy, Japan, U.K., U.S. and the E.U., in a statement issued Friday by the U.K. foreign ministry.

“We condemn the unlawful attack committed on a merchant vessel off the coast of Oman… which killed a British and a Romanian national. This was a deliberate and targeted attack, and a clear violation of international law. All available evidence clearly points to Iran. There is no justification for this attack,” reads the statement.

“Iran’s behavior, alongside its support to proxy forces and non-state armed actors, threatens international peace and security. We call on Iran to stop all activities inconsistent with relevant U.N. Security Council resolutions and call on all parties to play a constructive role in fostering regional stability and peace.” 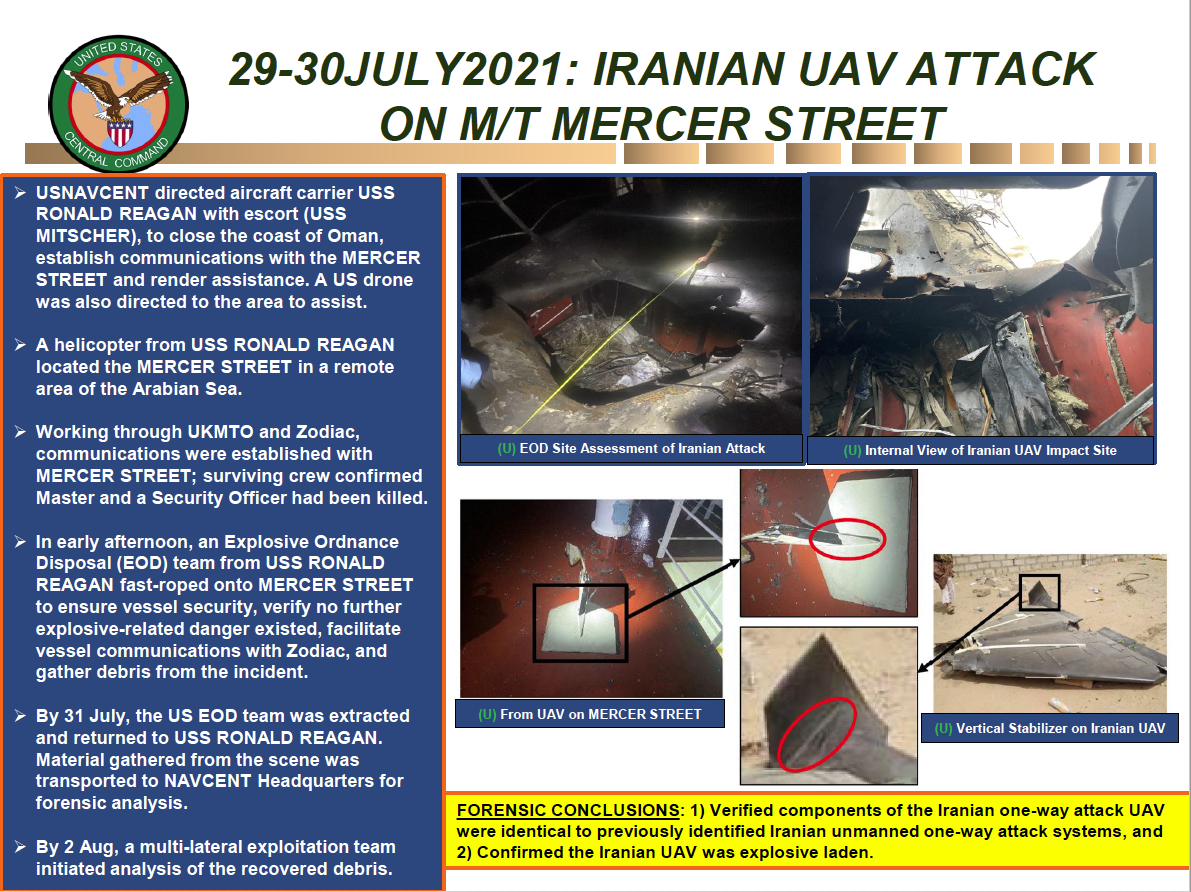 The attack of the Israeli-operated ship is widely seen as a continuation of the conflict between Israel and Iran over shipments of oil to Syria.

On July 3, a merchant ship that had recently been owned by Zodiac was allegedly attacked by an Iranian drone en route from Jeddah, Saudi Arabia to Jebel Ali, UAE, reported The New York Times.

Iranian drones’ technical sophistication is changing the dynamics of its proxy conflicts, Behnam Ben Taleblu, an Iran expert at the Foundation for the Defense of Democracies, told USNI News on Friday.

“Iran’s drones have undergone a revolution over the past decade, with more models being produced and proliferated than ever before, and increasing lethality,” he said.
“Iran’s willingness to climb the escalation ladder against Israeli and U.S. assets in the region means that it is both more confident in the capabilities of its military systems like drones, and its ability to withstand pressure or even a kinetic response.”