A federal search warrant filing was unsealed this week in the case of a sailor the Navy officially charged last week with setting the fire that devastated the former USS Bonhomme Richard (LHD-6), rendering the amphibious assault ship unsalvageable.

The sailor, identified as Seaman Apprentice Ryan Sawyer Mays, 20, is accused of arson and hazarding a vessel in charges filed July 29 under the Uniform Code of Military Justice. A U.S. 3rd Fleet spokesman confirmed Mays was the sailor charged last week.

Mays was among 177 Bonhomme Richard-assigned service members who were interviewed as initial witnesses, according to the affidavit requesting the search warrant.

One sailor assigned to the ship’s deck department told investigators he had seen “a ‘light-skin male’ wearing clean coveralls, a face mask, carrying a silver/metal bucket with both hands in front of his body descend into the Lower V” stowage area on the morning of July 12, 2020, according to the 33-page document. The sailor later told investigators it was Mays he had seen in the Lower V area, just forward of amidship and where smoke was first observed.

The fire broke out as the ship’s crew was pulling Sunday watch at Pier 2 near the end of a $249 million maintenance availability that included upgrades to accommodate the F-35B Lightning II Joint Strike Fighter. The fire quickly spread and burned for five days, damaging 470 of the ship’s 1,400 spaces and injuring several dozen people during the massive firefighting effort.

A federal judge in San Diego, Calif., had unsealed the warrant Tuesday so it could be provided to the sailor’s defense attorney, according to online court records, but the case remains sealed since the investigation is continuing.

The Daily Beast first reported on the warrant Tuesday night.

A civilian defense attorney representing the sailor accused in the case last week told USNI that the sailor claimed he didn’t set the fire.

“He’s going about his business, as best as one can with the allegations that are being made against him,” Gary Barthel, a retired Marine Corps officer and former judge advocate now in private practice in California, told USNI News last week.

Barthel took on the case last year after the Navy placed Mays in pre-trial confinement in the Consolidated Military Brig at Miramar Marine Corps Air Station in San Diego. The sailor was released after about three months, but hadn’t been charged with any alleged crime and continued serving in the Navy, the attorney said.

Mays had “no indication” that criminal charges were forthcoming, Barthel added. “He’s devastated, to say the least.”

Even with the official charges filed, Mays remained free as of today and wasn’t being held as his attorney waited to receive and review any government evidence against the sailor.

“We haven’t been provided any discovery at this point,” Barthel said. No date had been set for the initial preliminary hearing. 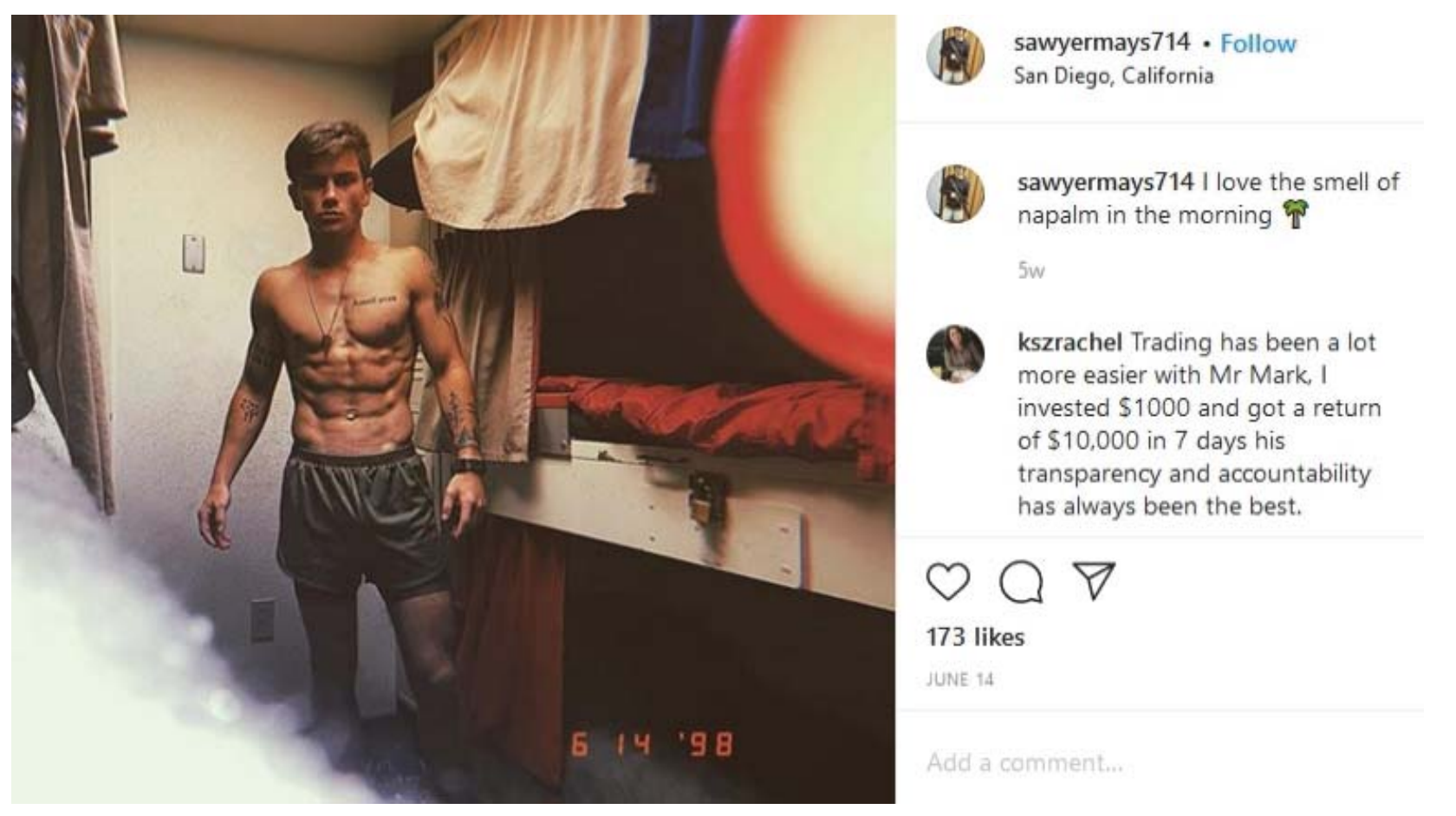 Mays, who enlisted in May 2019, began training to become a Navy SEAL but in March 2020 was dropped from Navy Special Warfare Basic Training in Coronado, Calif. He was then assigned to Bonhomme Richard, according to the Navy. He remained assigned to BHR until his reassignment to Commander, Amphibious Squadron 5 on April 15.

Vice Adm. Steve Koehler, who commands the San Diego-based 3rd Fleet, filed charges accusing Mays of aggravated arson and hazarding a vessel. As the convening authority, Koehler directed the hearing and will weigh the investigating officer’s recommendation to help him determine whether there’s probable cause to drop the charges, punish Mays or try him at a court-martial.

A command investigation into the details of the firefighting effort is expected to be released next month.

The search warrant reveals some of the evidence found by fire investigators sent to determine the source and cause of the initial fire, and suspicions that led to the Navy’s initial questioning and confinement of Mays.

For the NCIS-led criminal investigation, specialized teams of certified fire investigators with the Bureau of Alcohol, Tobacco and Firearms’ National Response Team boarded Bonhomme Richard on July 16, 2020, and spent several days in the “Lower V” looking for evidence.

“A witness indicated that he believed he had observed Mays enter the Lower V … and the report of smoke led the ATF CFI to classify the fire as incendiary,” or caused by arson, the warrant stated. It added that “an ATF CFI determined the fire originated at or near the starboard elevator bulkhead in the Lower V.”

The investigator discounted other possible ignition sources, including spontaneous heating and open flame, but noted “the progression and migration of the fire, coupled with the time in which a witness indicated that he believed he had observed Mays enter the Lower V.”

Four days later, on July 20, 2020, ATF investigators found and marked, with tape, an uncapped plastic bottle containing some liquid, but the following day they found only the tape, discarded.

“ATF immediately surveyed all members of the NRT and other law enforcement individuals who were processing the Lower V. None of these officials removed the bottle from the flagging tape or the scene,” the warrant stated. “Investigators stopped processing the fire scene and conducted an exhaustive physical search of the Lower V and found three additional bottles and two aluminum cans.”

“Records checks by NCIS revealed that during the timeframe the plastic bottle with the small amount of liquid went missing, Mays’ duty section had been onboard the BHR providing him or his associates access to the ship and Lower V. DNA was found on the discarded flagging tape. Analysis confirmed it was not Mays’ DNA or the DNA of the ATF investigator who found the bottle,” the warrant continued.

ATF Investigators also found several expended CO2 cartridges in the fire debris in the Lower V, “some of which were reportedly stored there prior to the fire,” the warrant stated. “However, investigators found additional CO2 cartridges inside the wash tub of a washer/dryer combination unit that appeared to have exploded during the fire, as well as additional cartridges on top of boxes of Purell hand-sanitizer that were inside coils of metal hose line.”

Investigators, with input from the ship’s damage control assistant, found several missing or damaged equipment in the four firefighting stations in the Upper V and Lower V areas. One firefighting station had no fire hose and another had one hose attached to diving equipment and another that had been cut, reminiscent of an earlier incident, the document stated. The DCA “opined that three of the four fire stations aboard the BHR appeared to be have been purposely tampered with and/or disconnected,” the warrant stated.

Mays was assigned to BHR‘s Duty Section Six, according to the warrant. The document indicates that the ship’s former command master chief “identified Mays as a person who showed disdain towards authority and the U.S. Navy.”

In initial, cursory searches, investigators found a June 14, 2020, post by Mays on his Instagram page stating “I love the smell of napalm in the morning.” He later told investigators it was a reference to the movie Apocalypse Now.

Mays initially told investigators in the screening that he was in Hangar Bay 3 at the time the fire was reported “and saw black smoke.”

“In response to a question that asked what time he learned of the fire; Mays wrote he found out at approximately 0830 that morning,” the warrant stated. “Another question asked if he was working or scheduled to work in the Lower V area the day of the fire; Mays replied ‘No, I was suppose to clean the mouring [sic] stations.’”

He also “was the only person who reported smelling ‘burning fuel/rubbery smell,’” it noted, “terminology Mays used to describe the smell of the fire was consistent with items and materials that the ATF observed in the Lower V during their scene examination.”

Mays denied to investigators “having started the fire on the BHR or having been in the Lower V on the day of the fire,” the document stated. “He maintained his innocence as to being the cause of the fire throughout the entire interview. At one point, after being told that he had been identified as having descended the ramp to the Lower V, before the fire started, Mays stated that he was being setup.”

A subsequent polygraph he agreed to take found “deception was indicated to the relevant questions,” the NCIS investigator noted in the warrant request.