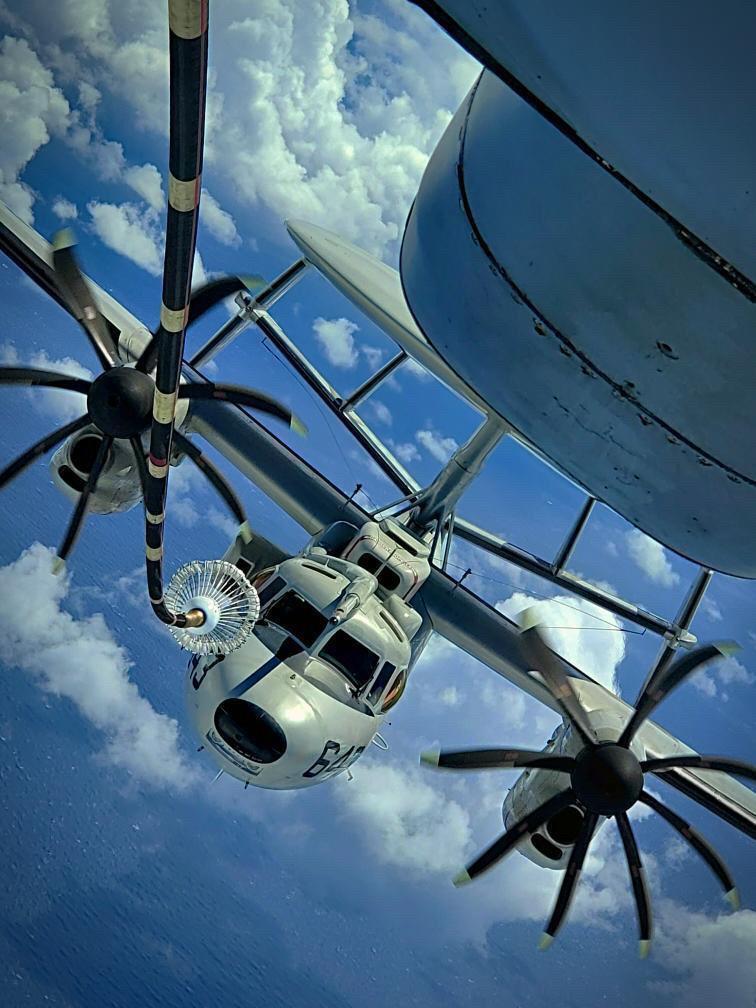 NATIONAL HARBOR, Md. — With production coming to an end in four years, the Navy is working out a plan to sustain the E-2D Advanced Hawkeye command-and-control aircraft for at least another 30.

Upgrades include cockpit avionics and enhancements to mission systems, communication capabilities and cybersecurity to keep the “eyes of the fleet” open well into 2040 beyond, according to Capt. Pete Arrobio, who heads the Airborne Command and Control Systems Program Office at NAVAIR PMA-231.

Upgrades to the E-2D Advanced Hawkeye are done through a series of “delta system software configuration” enhancements that take about four years from initiation to deployment on the aircraft, Arrobio said. The Navy is currently fielding DSSC 3 with version 3.1 rolling our later this calendar year. DSSC 3.1 introduces elements of the Joint Tactical Radio System (JTRS) and Link 16 so the E-2D will meet DoD-mandated cybersecurity standards in 2021, Robbio said.

“It allows the linking, coordinating, distributing and assessing the effects of targeting information at the tactical leading edge,” Arrobio said.

With a new DSSC coming every two years, fiscal 2023 will see introduction of version 4, which brings improvements to data fusion, GPS and radar upgrades. Air Test and Evaluation squadrons

Two years later, DSSC 5 “includes upgrades that are vital to the warfighting effectiveness of the carrier strike group in an A2/AD environment,” he said. Most of the capability details are classified and could not be shared at the conference, he said.

“The E-2D is being asked to do more than originally anticipated and this is the build to reset the antiquated, obsolete architecture that provides us with many of the challenges that we have today,” he said.

The sixth software upgrade package will enable interoperability with the Joint All-Domain Command-and-Control (JADC2) system and the Naval Operational Architecture.

“Yes, the E-2D is still in production,” Arrobio said. “It even has that new-aircraft smell. But the architecture and systems and components for this cockpit, as well as the back end, were designed when flip phones were on the stage; 2005.”

Topping the list is hardening the E-2D’s mission computer and displays against enemy cyber capabilities.

“There are risks that we can no longer accept,” Arrobio said.

That will come as part of the Hawkeye Cockpit Tech Refresh, or HECTR, that brings the Hawkeye’s avionics up to modern standards and introduces a heads-up display for pilots.

A new Theater Combat ID and mission computer displays is designed with an open-systems architecture that should reduce the time it takes to devise and install future software upgrade packages, Arrobio said.

“We just can no longer afford four to five years; that’s the duration it takes from idea to release on an E-2D,” he said.

Though it is not a requirement, the Navy also is considering an “improved landing mode” or ILM, for the E-2D to partially automate carrier landings as it has done with the precision landing mode, also called the “Magic Carpet” for F/A-18E/Fs and F-35Cs.

Adding ILM to the E-2, which is not a fly-by-wire aircraft and because of its ungainly mushroom-shaped radar, is more challenging, Arrobio said. But with aerial refueling, E-2D missions could last up to nine hours in the future and fatigued crews would benefit from the capability as they attempt carrier landings in adverse weather and at night, Arrobio said.

ILM is “not yet a requirement, but it’s going to be the fleet’s number-one request.”

The Navy currently has 48 E-2Ds with four more on the way before the end of calendar 2021.

The goal has been to maintain 22 mission-capable aircraft at all times with a goal of July 1, 2021. It met and bettered that goal in February, five months ahead of schedule, Arrobio said.

A mission-capable E-2D is essentially a training aircraft that allows pilots to fly between two-point, land on and depart from an aircraft carrier, but cannot fly the airborne early warning mission.

“Fully mission capable is what wins the war,” Arrobio said. “There are 11 fundamental systems on this platform that must be fully operational for this platform to do what it needs to do.”

The goal is to get have 22 fully mission-capable aircraft in the fleet at all times by Sept 1. That represents a doubling of the “fully” mission capable fleet over the past two years, he said. Since February, the Navy has averaged 29 mission-capable E-2Ds.

The Navy has 26 E-2C Hawkeyes that are used solely for training and are scheduled for retirement by the end of fiscal 2026.

While the Navy’s E-2D requirement is 86 aircraft, the service is funded for a total 78 Hawkeyes that should be fielded by 2025.

Three of nine E-2Ds have been delivered to the Japanese Self-Defense Force under a second multi-year contract. Japan already has four Hawkeyes in its inventory.

France in December signed a letter of agreement to purchase three E-2Ds that should be delivered in fiscal 2027. Taiwan and Egypt also are in discussions to field the platform, Arrobio said. All four countries already operate the legacy E-2C.