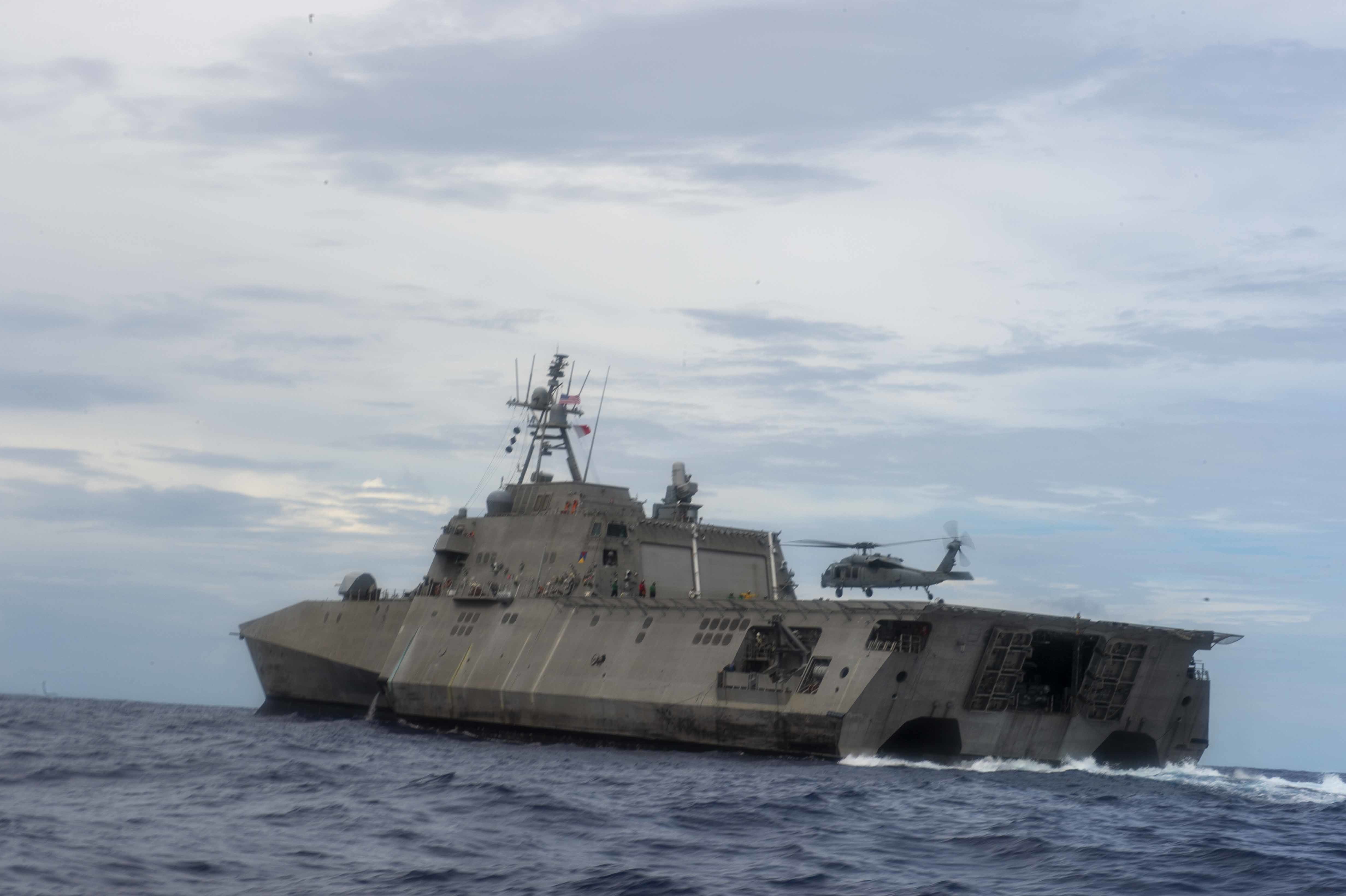 KUALA LUMPUR — The Navy is making Littoral Combat Ship deployments in the Indo-Pacific region more flexible and unpredictable, allowing the service to respond to impromptu engagement opportunities and ensuring the LCS are not tied to any fixed location for too long, Chief of Naval Operations Adm. Mike Gilday said during a media conference call on Wednesday in conjunction with his official visit to Singapore.

USS Charleston (LCS-18) has used Singapore as a replenishment port while USS Tulsa (LCS-16) has largely operated out of Guam – a break from the Navy’s initial plan for the platform that had Singapore Changi Naval Base as the only service’s LCS hub in the Pacific.

“We’re just flexing towards different exercises and movements and trying to be operationally unpredictable. We’re being very aggressive in terms of moving LCS in different regions out here, trying to do it very quickly, putting ourselves in a position where we don’t have to keep them in any given location for very long, that we can move them around to any exercises at a short fuse or PASSEX exercises with other navies,” he said.

The Navy has been focused on resolving the problems of the LCS and is headed in the right direction in regard to the operational availability of the LCS fleet, with deployments to the Caribbean and to the Western Pacific, Gilday said. The plan to deploy up to four LCS from Singapore currently meets the Navy’s operational commitment, but in the future, I would like to see more LCS operating in the Western Pacific but we have not settled on what the basing model might be for those ships.” He added that the rotational deployment in the Singapore model and the home basing model in Japan have both worked well for the Navy. 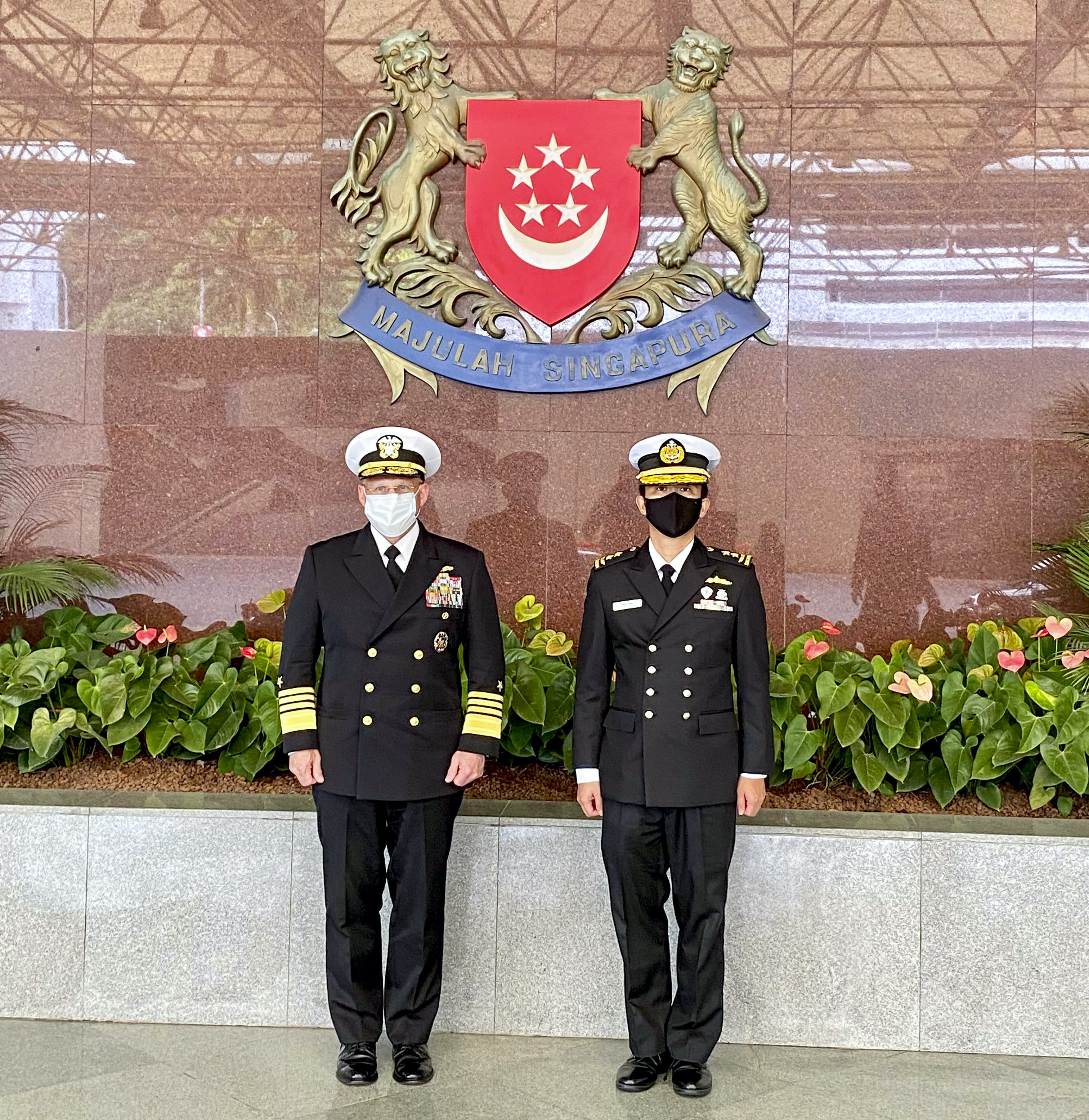 Chief of Naval Operations (CNO) Adm. Mike Gilday meets with Chief of Navy, Republic of Singapore Navy Rear Adm. Aaron Beng during a trip to the region on July 26, 2021. US Navy Photo

Gilday dismissed the idea of the establishment of a U.S Navy 1st Fleet command based in Singapore. “Right now the United States Navy has no plans to stand up another fleet headquarters, whether it is in Singapore or in any place else in the Western Pacific,” he said.

Instead, the Navy is exercising the inherent mobility of its existing fleet headquarters to deploy wherever a fleet headquarters is required. “Sometimes people tend to think of those fleet headquarters as geographically constrained, that they can only operate in those specific areas of operations but that’s now how we look at it,” Gilday said.

The service wants to be more innovative, not self-limit via geography and use its fleet headquarters in a much more mobile way.

“There are other options besides standing up an additional fleet headquarters to meet any kind of operational demand we may have, whether it is in the Indian Ocean or Western Pacific or other regions,” he said. Gilday cited the example of U.S 2nd Fleet command team, based in Norfolk, Va., that has deployed to North Carolina, Iceland, aboard a command ship in the Mediterranean, Norway and Denmark.

Speaking on the inclusion of the destroyer USS The Sullivans (DDG-68) in the U.K. Royal Navy’s Queen Elizabeth Carrier Strike Group and the embark of U.S. Marine Corps Fighter Attack Squadron (VMFA) 211 on the carrier, Gilday said the Navy was happy to be part of the strike group and it had been successful in terms of interoperability and interchangeability. He said the Marine F-35 deployment will provide experience and flexibility for future deployments of U.S F-35s on HMS Queen Elizabeth (R08).

Earlier on Wednesday, Gilday participated in the International Maritime Security Conference, delivering a presentation there that reiterated the U.S Navy’s commitment to ensuring security and stability globally with its partners. At the same time, Gilday also gave a brief preview on the upcoming Large Scale Exercise 21, saying, “Later this summer … we’ll conduct the biggest U.S. Navy exercise in a generation with Large Scale Exercise 2021. Spanning 17 time zones … approximately 25,000 Sailors and Marines on both sides of the Pacific and Atlantic Oceans will leverage the integrated power of our sensors, weapons, and platforms across all domains.”

During the conference, the Chief of the German Navy, Vice Adm. Kay-Achim Shönbach, said frigate FGS Bayern (F217) will be dispatched in August and reach the Indo-Pacific in the beginning of September. The ship will return to Germany by March 2022. He also said that in the future, there is the possibility of using crew changes to sustain vessels in the Indo-Pacific region for up to two years and that Germany might set up a permanent logistics hub in Singapore or Australia.