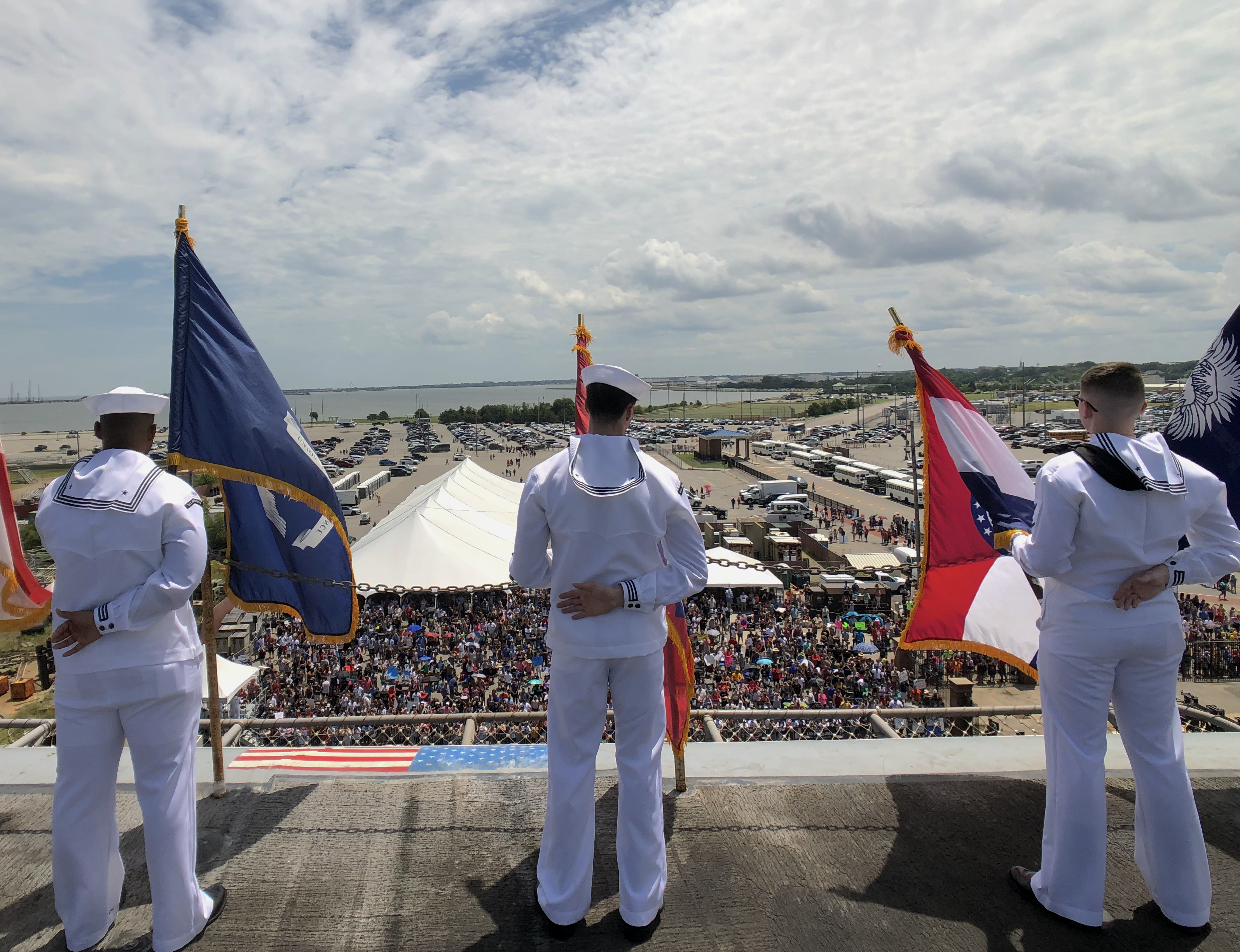 ABOARD THE AIRCRAFT CARRIER USS DWIGHT D. EISENHOWER – The busiest aircraft carrier on the East Coast is back home after two grueling, back-to-back deployments that kept the ship on station in the Middle East for a total of seven and a half months.

Since USS Dwight D. Eisenhower (CVN-69) left for its first deployment on Feb. 20, 2020, the ship has been deployed for 320 of the last 514 days – not counting training exercises and restriction of movement periods that have kept sailors away from family and loved ones.

On Sunday, Ike slipped up the James River with about a thousand sailors in their whites looking outboard as the carrier made a smooth 90-degree port turn into Pier 14 at Naval Station Norfolk, Va. From the bow of the ship hundreds of families crowded the pier to meet the crew.

When Ike’s sailors left the ship on Sunday it was the only fourth time most of them touched the shore since the ship left for its deployment Feb. 18, 2021.

In fact, the bulk of the two deployments have been spent patrolling a small patch of water in the North Arabian Sea and the Gulf of Oman – on the first deployment to support the ongoing fight against ISIS and as a hedge against Iran and the second covering the withdrawal of U.S. forces from Afghanistan.

“They were supposed to remain in the Mediterranean and the North Atlantic but they ended up spending most of their deployment in the Middle East,” U.S. 2nd Fleet commander Vice Adm. Andrew Lewis told reporters at Naval Station Norfolk on Saturday.
“Their previous deployment was in the Middle East, too. They’ve had a couple of port visits but it’s not much to write home about.” 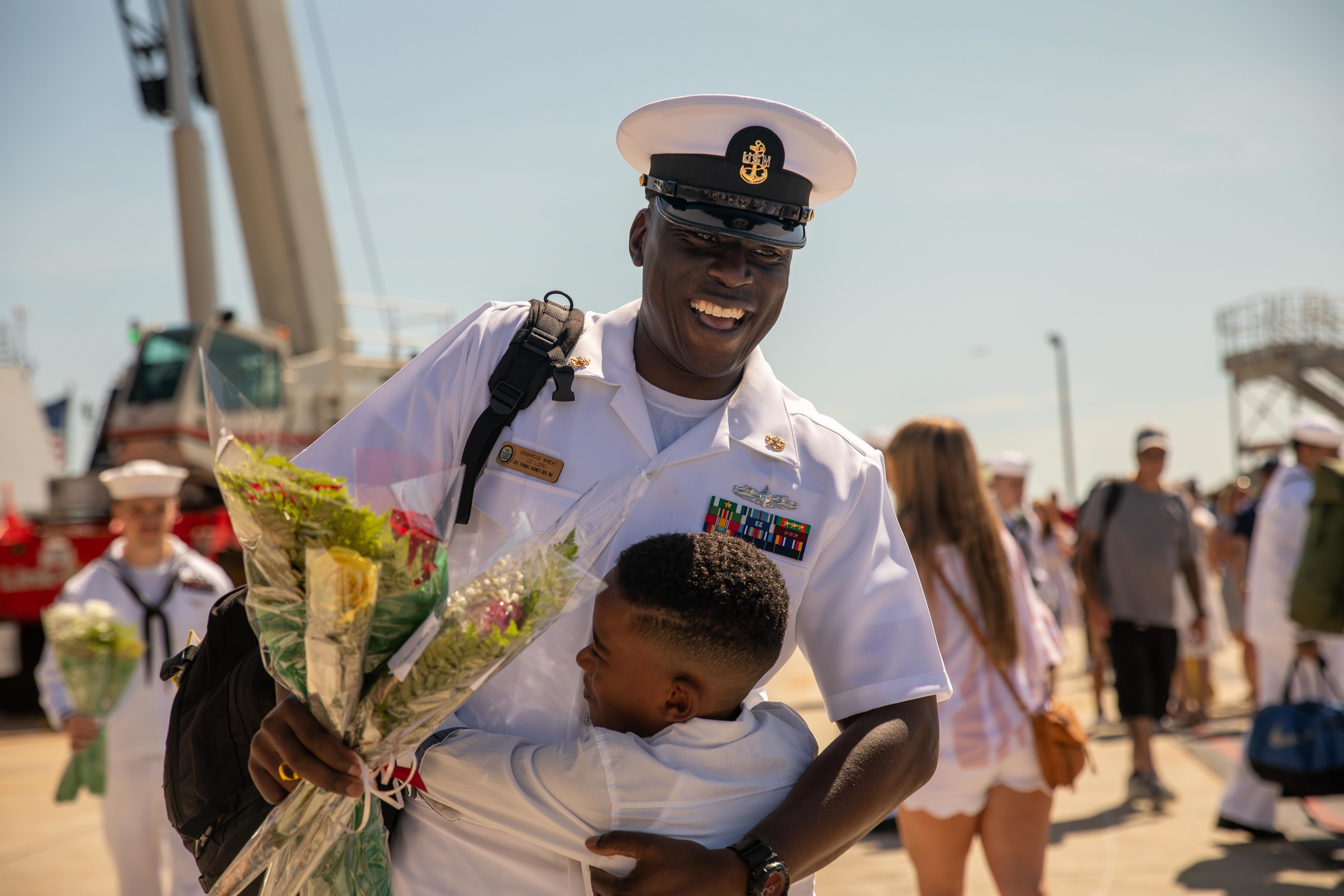 The growing efficacy of the Russian fleet – particularly its submarine threat – has pushed the U.S. and its allies to exercise more in the high north with larger formations like carrier strike groups and amphibious ready groups. Ike was set to support those missions in conjunction with the deployment of the U.K. Royal Navy’s new carrier HMS Queen Elizabeth (R08). But the Pentagon and U.S. Central Command leaders tapped Ike to shelve initial plans and move to cover the Afghanistan withdrawal.

“We had one thought of what we were going to execute for the numbered fleet commander. What we wound up actually executing was radically different but we’re trained for that,” Rear Adm. Scott Robertson, commander of Carrier Strike Group 2 told reporters on Ike’s bridge.

The embarked Carrier Air Wing 3 flew a combination of close air support missions that included the suppression of the Taliban’s ability to trigger remote bombs and improvised explosive devices, presence flights and strike missions in support of the withdrawal. 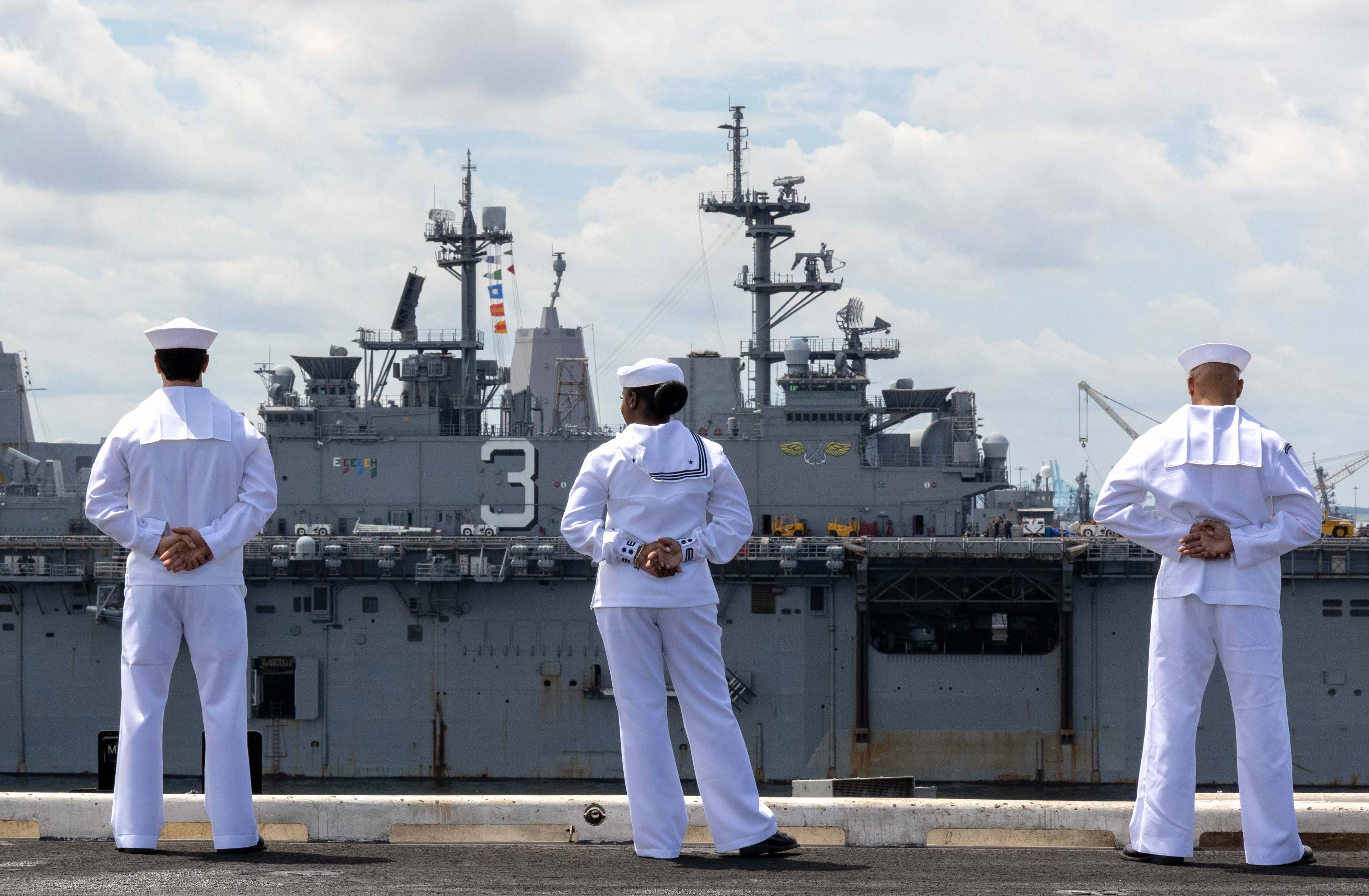 “Helping to support the end of a 20-year conflict was… really special and it gave our all of our sailors, pilots and air crew – the entire force – gave us a real sense of purpose to be over there knowing that our operations were going to be protecting American lives on the ground,” Robertson said.

While double-pumping a carrier is not ideal, the leaders and the crew had enough warning to blunt the effects of the dual deployments. For example, while Ike, CAW 3 and cruiser USS Vella Gulf (CG-72) did both deployments, CSG 2 took over leadership from CSG 10, along with a new roster of guided-missile escorts.

Ahead of the first deployment, the carrier beefed up its mental health support with a cadre of about 140 sailors that were trained in identifying problem behaviors in fellow sailors before they spiraled into larger issues for the ship, Ike’s psychologist, Cmdr. Brendan Finton, told USNI News. According to a study of carriers, Ike, despite the double pump, performed well compared to the rest of the fleet in terms of mental health.

“From the last deployment, we looked at how our mental health numbers were compared to other carriers in the fleet and our numbers look pretty good,” Cmdr. Paul Greer, Ike’s chaplain, told USNI News.
“We look at the total utilization of services. We look at suicide related interventions as part of that. We look at unplanned mental health losses as part of that. That was a critical component of the last deployment and even this one had a significantly low number of those.” 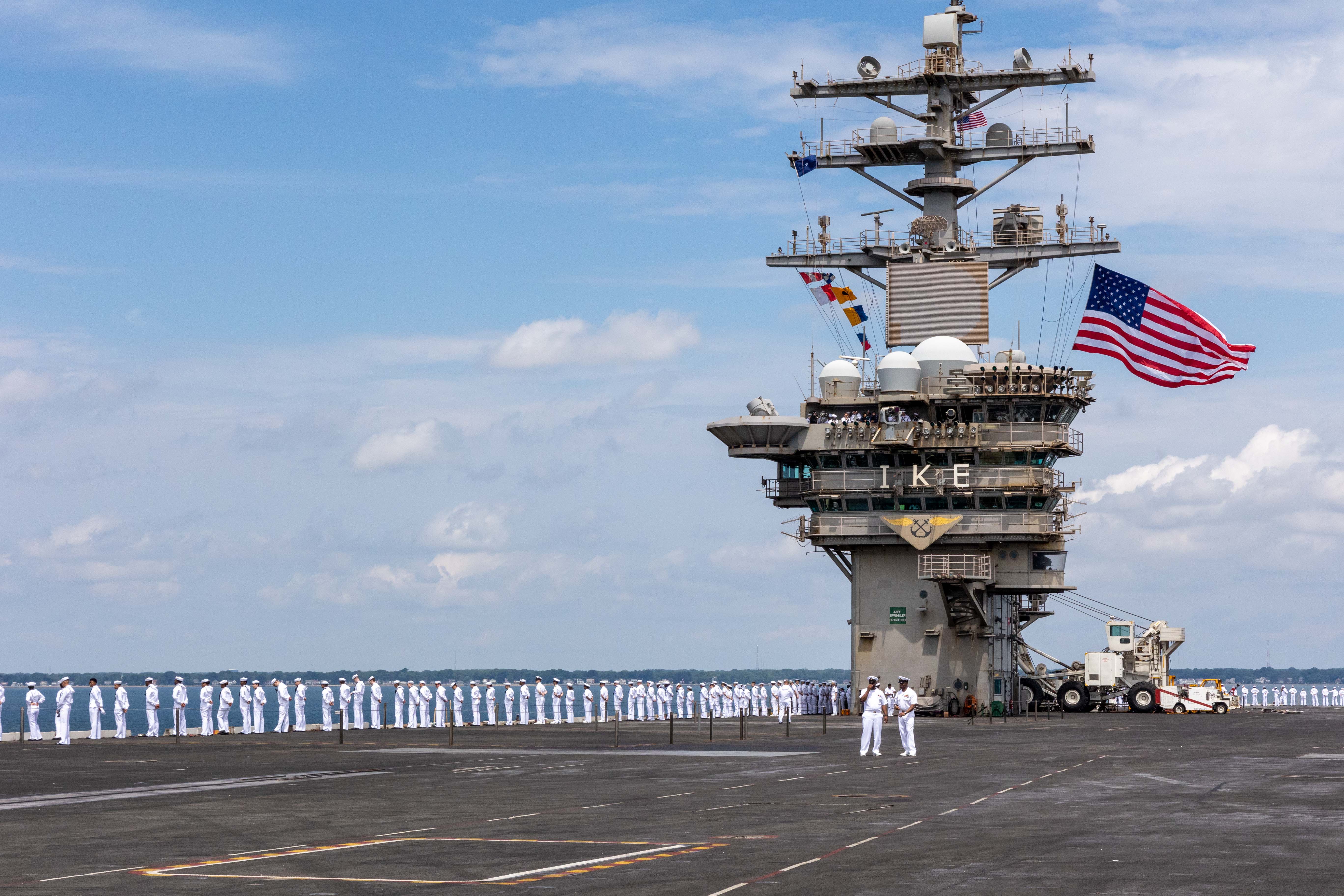 For the current deployment, Ike had three unplanned mental health losses – where a crew member left due to mental health concerns – in its crew of more than 5,000. The average for a regular carrier is closer to 80.

Now that the carrier is back, it will soon enter a 12-month maintenance period at Naval Station Norfolk, Va., Campagna said.

“I don’t expect any availability extensions on this one,” he said. “What I’m most proud of is the sailors onboard this ship have done an incredible job of inspecting the ship, documenting all the deficiencies. We created this whole ship work plan of all the work we need to get done and we did back in March … They’ve had time to look at all the jobs they need to get done to integrate the schedule together and determined a really nice path that we can go through in order to get the ship out on time. I’m excited to execute, there’s no more discovery. We’re in execution mode when we get back and I’m excited to execute that on time.”