Surface warfare officers are leaving the Navy at a higher rate than other unrestricted line officers despite reforms in training the service has instituted since two fatal collisions in 2017, according to a new report from the Government Accountability Office.

Compared to aviators, submariners and the special warfare/explosives ordnance disposal community, “SWOs had shorter average careers and higher separation rates compared with officers in similar U.S. Navy communities, despite the U.S. Navy’s investments in SWO training,” reads the report, which was released near the fourth anniversary of the collision of USS Fitzgerald (DDG-62) and the merchant ship ACX Crystal that killed seven sailors.

After ten years of service, 33 percent of SWOs stay in the community versus 45 percent of other unrestricted line officers – officers eligible to command ships, aircraft squadrons and SEAL teams. The GAO also found 12 percent of female SWOs remain in their community, compared to 39 percent of male SWOs.

Evaluating personnel data from 2004 to 2020, the agency found from Navy data that retention for SWOs was so low that the service changed how it inducted junior officers to ensure an adequate number of department heads for surface ships.

Following the Fitzgerald collision and one later that summer between USS John S. McCain (DDG-56) and a merchant ship that killed 10 more sailors, the Navy crafted more than 100 recommendations to improve surface warfare training and operations.

That included standing up new training schoolhouses on both coasts, crafting a new career path for surface warfare officers and instituting a career-spanning logbook to record time at sea.

The GAO interviewed more than 200 SWOS across 12 ships in the Pacific and Atlantic fleets in 2019 and analyzed service personnel data to derive SWO specific trends after the early adoption of the reforms.

In general, investigators found that SWOs wanted more training and increased specialization for the profession.

“GAO found that by a factor of four to one, SWOs believe specialized career paths would better prepare them for their duties than the current generalist career path,” the reports read.

Specialization of SWOs is a key feature in allied navies, with experts in ship handling, engineering and weapon systems.

“The U.S. Navy SWO community trains its officers in a generalist career path across multiple disciplines, such as ship-driving, engineering, and combat systems, and across multiple categories of ships, such as surface combatants, amphibious, and mine warfare ships,” reads the report.
“However, the selected foreign navies and other U.S. Navy and U.S. maritime communities specialize their officers in a specific ship department discipline or to serve on a certain ship type.” 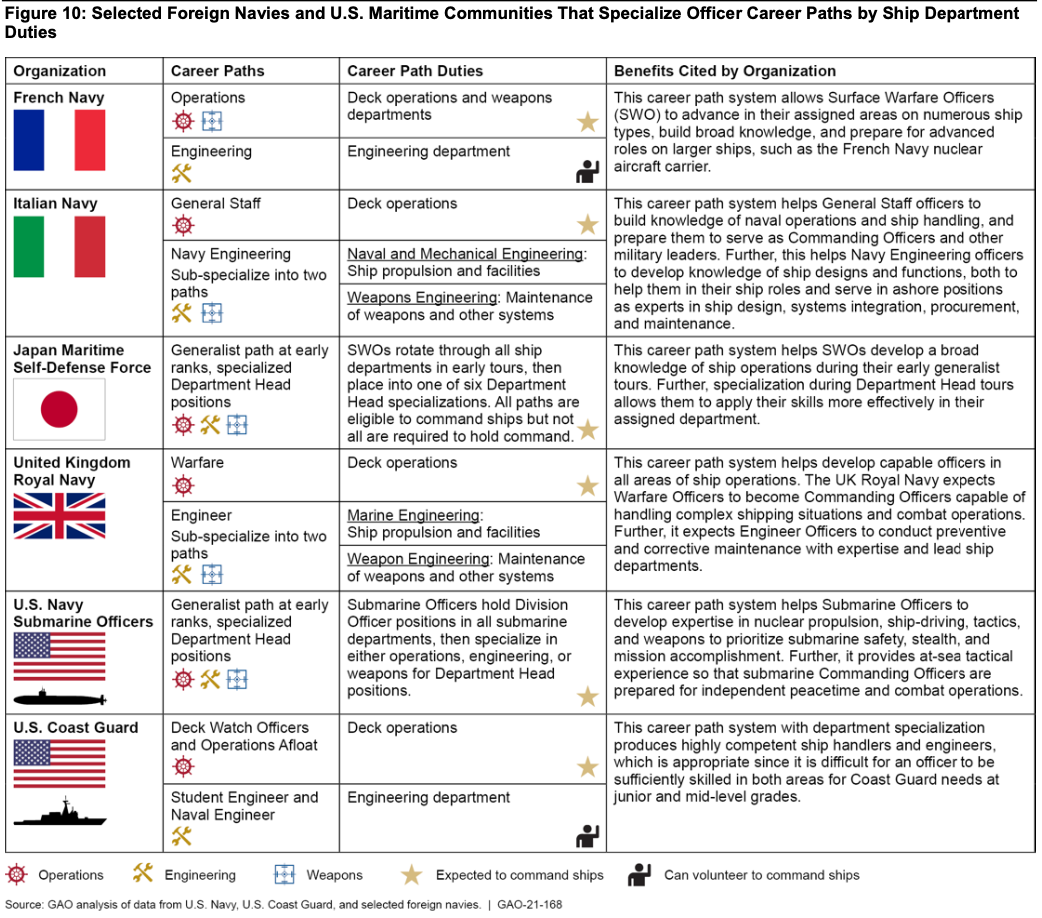 Based on the interviews and data analysis the GAO presented the Navy with seven recommendations:

The Navy concurred with the recommendations.