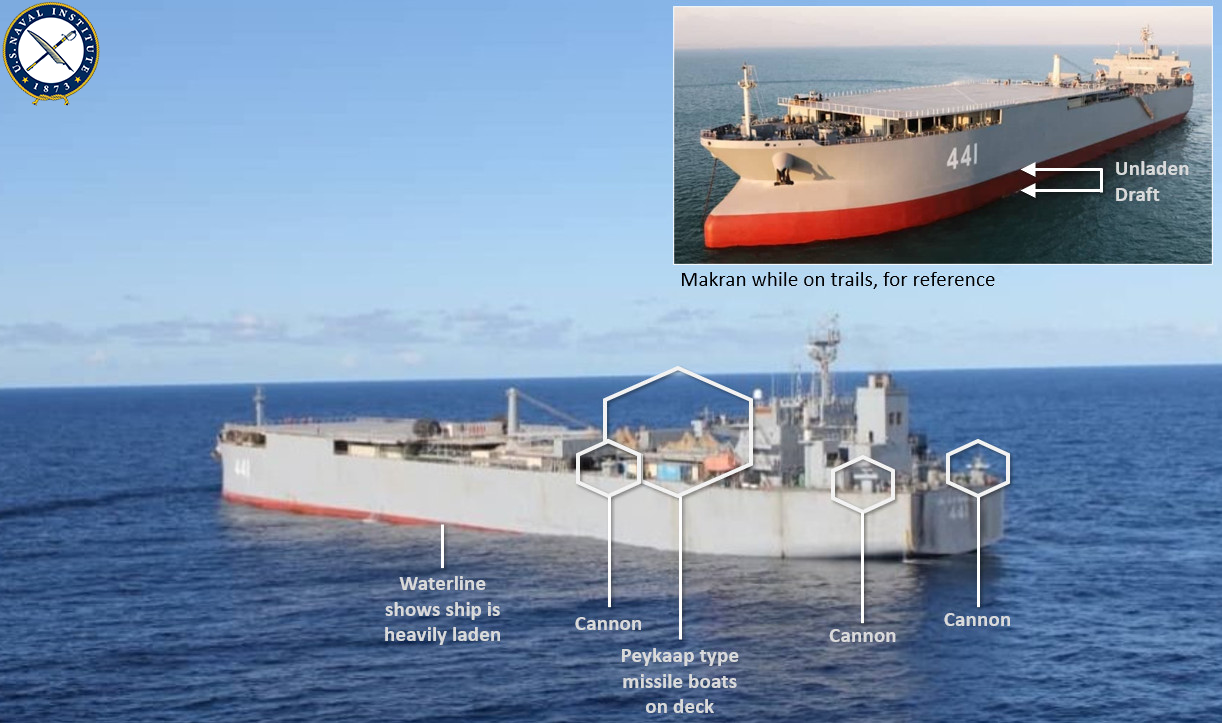 The former oil-tanker the Iranian Navy converted into a warship could be carrying millions of gallons of fuel to Venezuela in a ploy to get around U.S. sanctions, according to photos that emerged on Persian social media.

On Thursday, undated photos of IRINS Makran show the ship, designed to carry around 3 million of gallons of fuel, riding low in the water compared to its January commissioning photos. The photos, circulated on the Telegram instant messaging service, show Makran and its accompanying frigate, IRINS Sahand, underway following their late April departure from its homeport. One photo showed Sahand taking on fuel from Makran.

Merchant mariner and history professor Sal Mercogliano told USNI News after reviewing the photos of Makran that the ship appeared to be fully laden to near its maximum capacity.

“She is loaded down to the gills. She is obviously loaded with fuel but much more fuel than what’s needed,” Mercogliano told USNI News on Thursday.
“Those ships could circumnavigate the world dozens of times. But thing you can’t stop her from doing is delivering that fuel to Venezuela – that’s been the big issue, getting around the embargo and getting Iranian fuel to Venezuela. No one is going to stop an Iranian Navy vessel from delivering that oil. That’s one sure way of getting around the embargo. The embargo deals with commercial vessels not navy vessels. How would you even know?”

Venezuela is rich in oil but has limited refining capability leading to widespread shortages in fuel across the country. 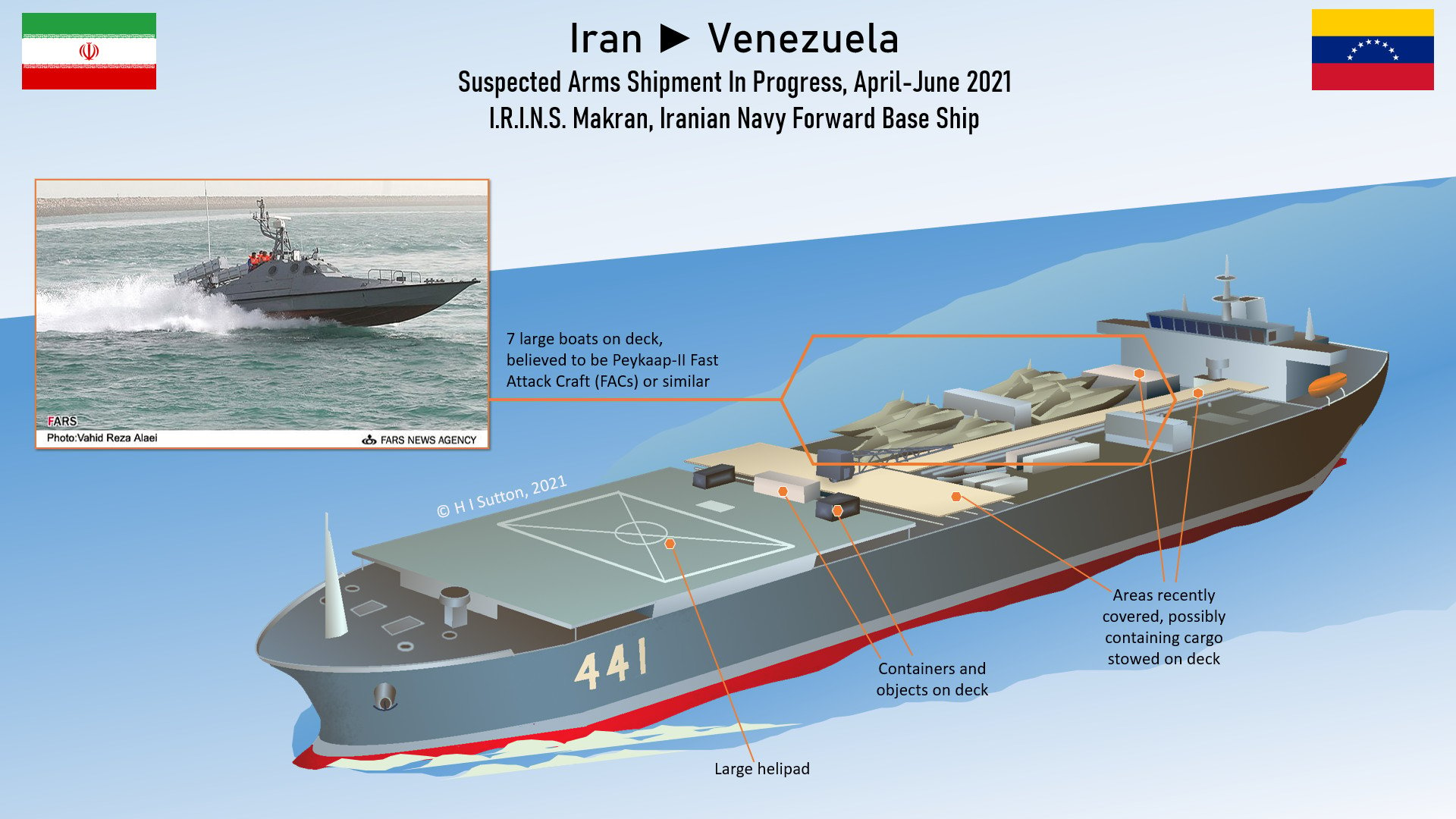 Under maritime law, a warship is entitled to sovereign immunity and not subject to the jurisdiction of any other state, James Kraska, a professor of international maritime law and the U.S. Naval War College told USNI News on Thursday.

“Although it is a warship, because it is a naval auxiliary, it is not entitled to belligerent rights during armed conflict, meaning that it may not lawfully conduct attacks,” he said.
“But like U.S. naval auxiliaries, it may carry out the full range of naval support missions and is protected by sovereign immunity.”

That means Makran and its cargo are legally protected from interdiction from U.S. law enforcement or the Coast Guard. Previous shipments of oil to Venezuela from Iran by commercial shippers have been seized by U.S. officials. Shipments from Iranian-flagged tankers unloaded fuel in May and September of 2020 in Venezuela, 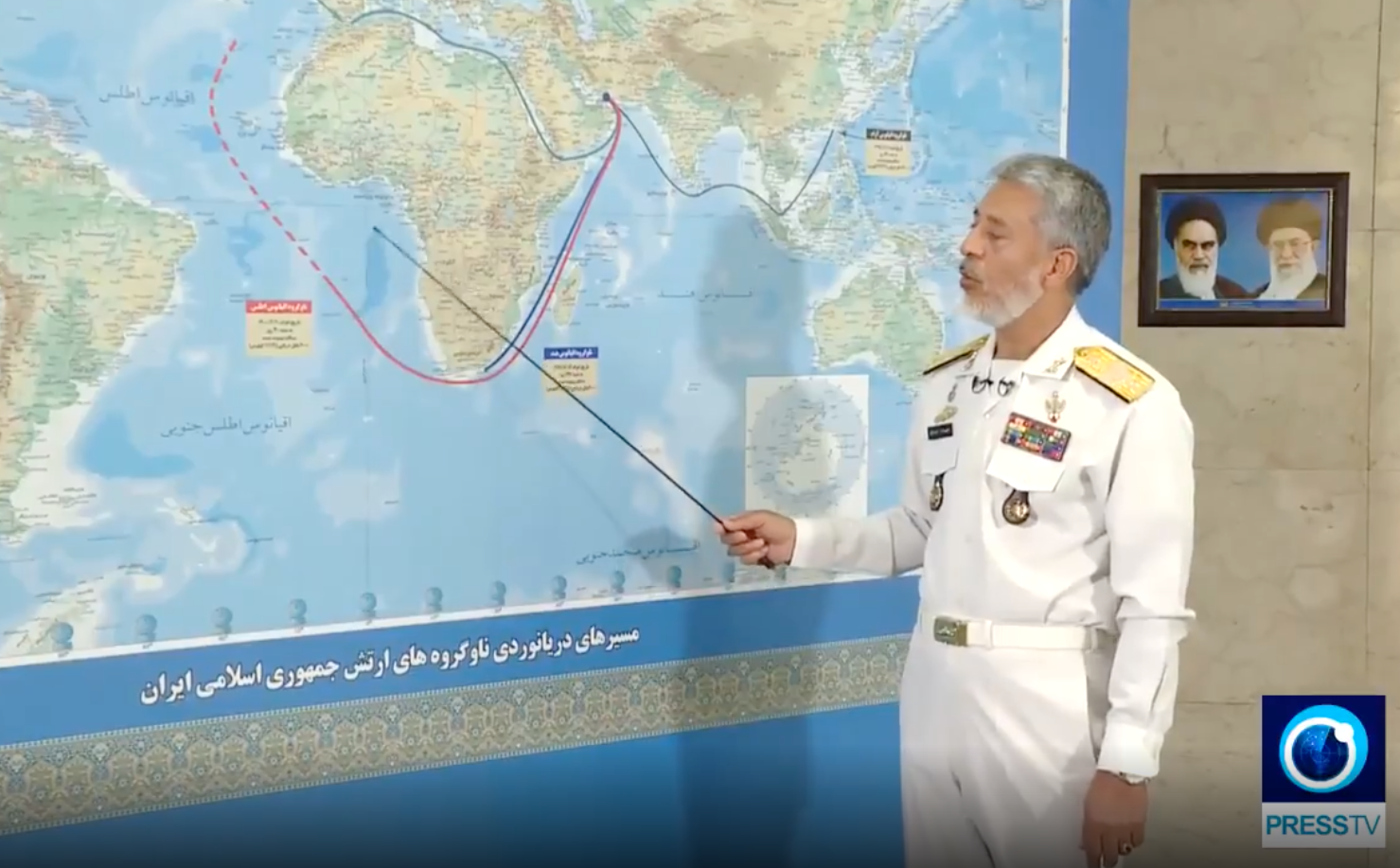 “The shipowner is liable to U.S. sanctions,” Iranian sanctions expert Kenneth Katzman told USNI News on Thursday.
“But the Iranian-owned ships made it. They were not deterred. They were not diverted.”

A Department of Justice spokesman declined to comment when reached by USNI News on Thursday.

On Thursday, Iranian state television confirmed Makran and Sahand were operating in the Atlantic. Iran released photos of Sahand underway in heavy sea states typically found in the Southern Atlantic near the Cape of Good Hope and unlike the larger placid water of the Middle East.

“The Navy is improving its seafaring capacity and proving its long-term durability in unfavorable seas and the Atlantic’s unfavorable weather conditions,” Rear Adm. Habibollah Sayyari, Coordinating Deputy of the Islamic Republic of Iran Army and former Islamic Republic Guard Corps Navy said on Thursday, according to The Associated Press.

In a clip-on Iran’s Press TV, Sayyari indicated the pair of ships was more than 500 miles off the coast of Angola in the South Atlantic.

Sayyari said the ships would not make port-calls on their deployment. The statement follows a Politico report in which U.S. officials had warned Cuba and Venezuelan not to let the Makran and Sahand dock at their respective countries.

A Pentagon spokesperson referred USNI News to a June 2 Defense Department statement that said Iranian arms sales would be “a provocative act and a threat to our partners in this hemisphere. As such we would reserve the right to take appropriate measures – in concert with our partners – to deter the delivery or transit of such weapons,” without addressing the issue of using a warship to skirt sanctions.

The AP reported the Maduro government was not intending the ships to pull into Venezuela, citing an unnamed government official,

While both Tehran and Caracas deny Makran is headed to Venezuela, a move to squeeze out from U.S. sanctions is in line with Iran’s playbook, Behnam Ben Taleblu, an Iran expert at the Foundation for the Defense of Democracies, told USNI News on Thursday.

“Adaptability is the name of the game for the Islamic Republic. This is especially true when it comes to oil exports and trying to stay ahead of the web of political, economic, and legal restrictions on its oil exports and associated capabilities,” Taleblu said.
“Although Iran is not the first country to reportedly convert an oil tanker into a military vessel, if the Makran is headed to Venezuela this could be just the cover Iran needs to avoid interdiction or interception.”

Mercogliano told USNI News converting a commercial tanker into a warship is a tactic both the Americans and the Russians have used for decades.

“The conversion to [Makran] is very minimal. They put a flight deck on her, put a crane on her. She’s basically just [a] tanker. It was what was done in World War II to turn tankers into temporary aircraft carriers or carry PT boats for delivery,” he said.
“The Soviets did it in the Cold War all the time. They would stick a helo deck on the front of a tanker, load deck cargo and deliver the oil and the cargo.” 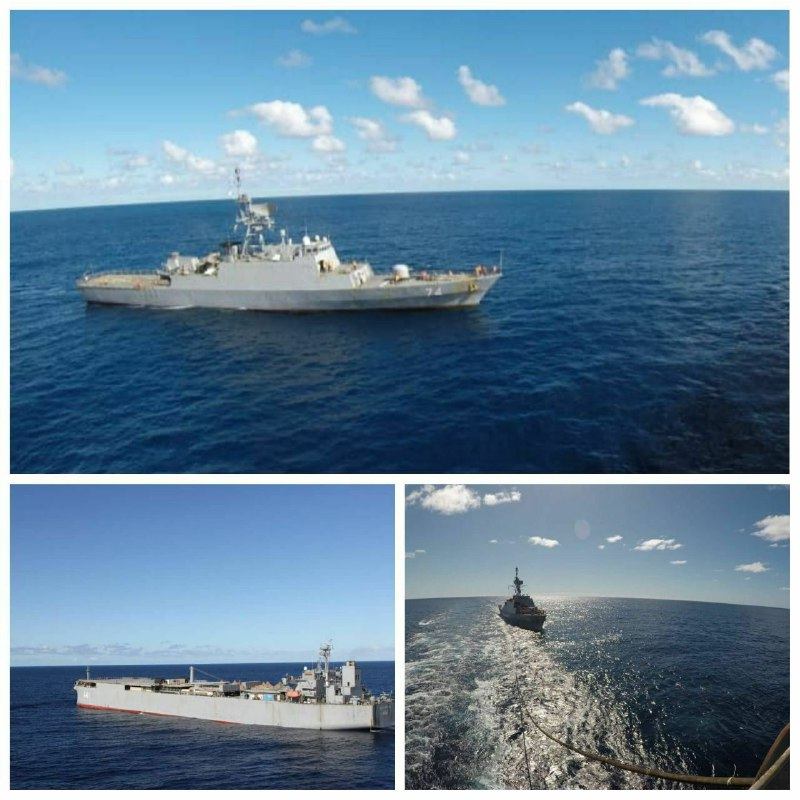 Photos of Makran and posted on June 10, 2021 on Iranian social media.

“Whether weapons or oil, Iran is sure to try to capitalize on new and innovative way to bust sanctions and bail both itself and its international partners out of an economic vice-grip,” he said.
“Makran, if it docks in Venezuela, maybe just the medium for these sanctions busting.”