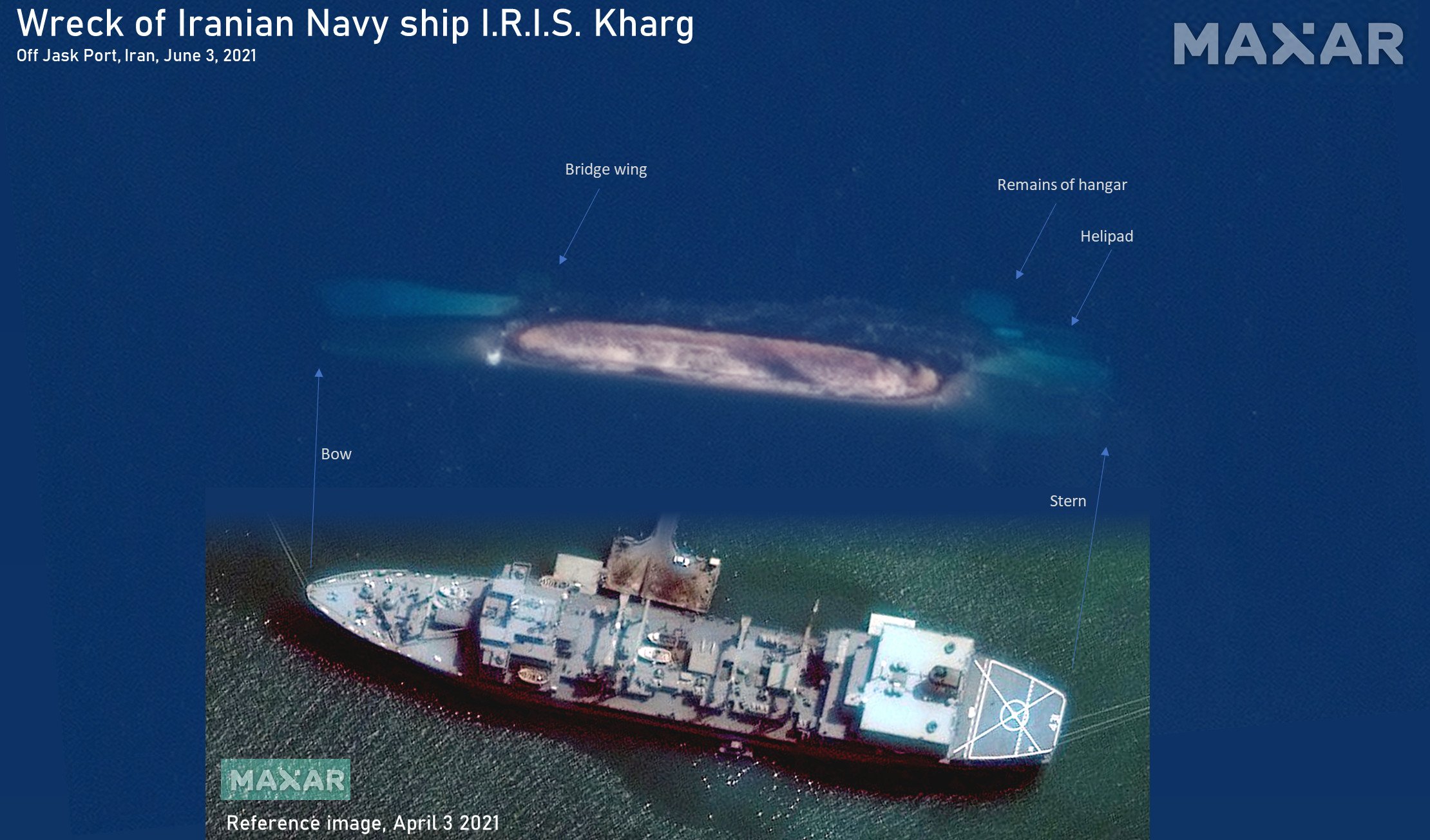 IRIS Kharg before and after the June 1 Fire. Maxar Image used with permission

New satellite images released Thursday show the sunken hull of what earlier this week was one of Iran’s largest warship, IRIS Kharg an Ol-class replenishment oiler, caught fire on the evening of June 1.

The crew battled the fire with only 33 injured and no deaths but could not save the ship. In the end only the sea could extinguish the flames. Kharg burned for hours before slowly listing to starboard and sinking stern-first, within sight of the Iranian port of Jask, according to imagery provided to USNI News by Maxar.

The loss of Kharg, Iran’s only replenishment ship, created new challenges for the under-resourced Iranian Navy. The fleet oiler was an essential unit in Iranian ambitions to operate beyond the Middle East. For example, when Iranian warships sailed to the Mediterranean in 2011 Kharg was a key part of the group. In 2014, when Iran said that it was sending warships to the Atlantic, Kharg was present. While the Iranian surface group did not make good on Tehran’s promise to operate in the Gulf of Mexico, Kharg did give the Iranian Navy potential for much longer voyages. 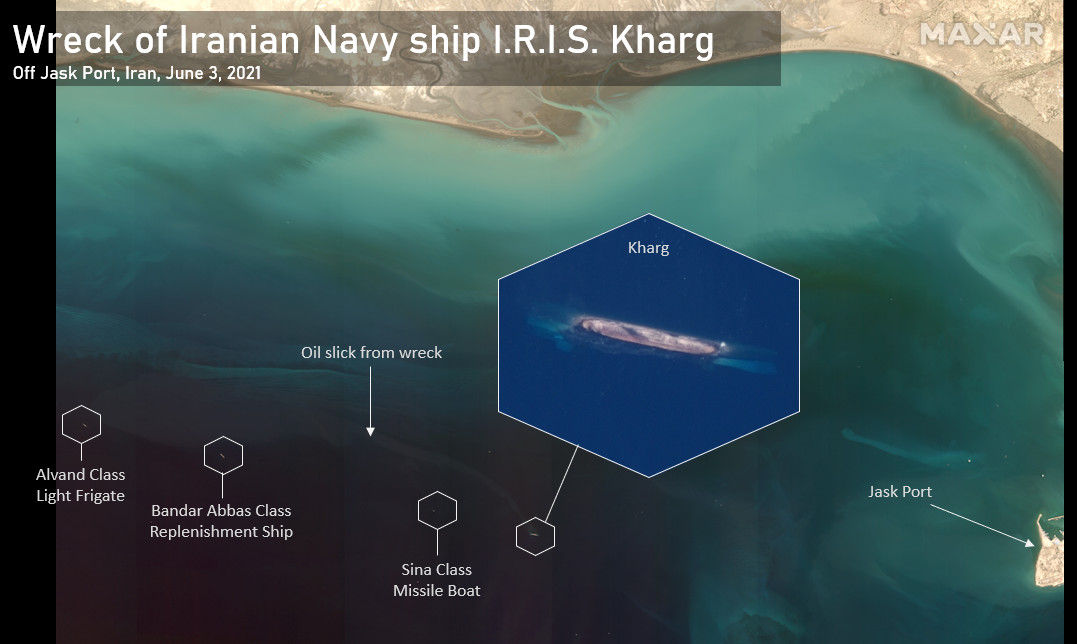 Kharg also acted as a training vessel, carrying 300 to 400 naval cadets. Last year it operated in the Indian Ocean carrying 300 cadets. There are reports that at the time of the accident, Kharg had 400 cadets aboard that were set to join in a training exercise with the Russian Navy.

The sinking is the latest in a series of serious mishaps affecting Iranian Navy ships in the last three years. On Jan. 28, 2018, the light frigate IRIS Damavand (77), the flagship of Iran’s Caspian Fleet, ran aground on the breakwater at Bandar-e Anzali. The ship, which was less than three years old, was damaged beyond repair.

On May 10, 2020, the support vessel IRIS Konarak was accidentally struck by a missile fired by an Iranian light frigate. The misfire killed 19 sailors. The superstructure was destroyed and although the hull could be towed to port, the ship was lost. The Kharg incident this week is the third time in recent years that the Iranian Navy has lost a vessel due to an accident.

Iran’s sectarian maritime force, the Islamic Revolutionary Guard Corps Navy (IRGCN), suffered their own incident in July. A large target barge, designed to resemble a U.S. Navy Nimitz-class carrier, sunk while under tow back to base. The wreck of the mock carrier posed a danger to navigation and drifted with the tides just outside the Bandar Abbas naval base, almost blocking the entrance. Eventually, they were able to tow what was left into the harbor.

The Ol-class ship was built in the U.K. and delivered to Iran in 1984. Kharg displaced 33,544 tons and was 679 feet long – about the size of a U.S. San Antonio-class amphibious warship. For many years Kharg was the largest ship in the Iranian fleet, but the oiler had recently been surpassed by the IRIS Makran.

Makran itself is an unusual support ship for the Iranian Navy and may replace Kharg in the training role. The converted oil tanker is around 755 feet long and was launched in October 2020. Her new role is as a forward base ship, roughly equivalent to the U.S. Navy’s Expeditionary Sea Base (ESB). For this role, it has a large helipad fitted and can carry cargo, boats, or submersibles.

After several training exercises, Makran has been loaded with seven fast attack craft and sent down the East Coast of Africa, USNI News reported this week. Accompanied by an Iranian Navy frigate, the lack of an oiler on the deployment implies Makran could make the journey and support the frigate escort on its own. U.S. officials have said the destination is Venezuela. However, Kharg’s sinking may have interrupted the transport of the boats to Venezuela. There are unconfirmed social media reports that Makran has been diverted to replace Kharg in a training exercise with the Russian Navy

The Iranian Navy IRINS Makran supposedly headed to Venezuela is ordered back home as a result of IRIS Kharg sinking in the Gulf of Oman. She will replace Kharg in the IRIN training mission to Russia.
It won’t be officially confirmed as they weren’t officially headed to Venezuela. https://t.co/HZeWZpiwPg pic.twitter.com/5XNqDgtD2v

With Iran’s modest shipbuilding industry, it seems unlikely that they can build a replacement oiler very quickly. Makran may be forced to take on more than just the training role from Kharg. In the short term, analysts will be watching Makran for signs the ships will proceed with operations or arms sales to Venezuela. In the longer term there is the question of whether Kharg can be replaced by the Iranians and how soon the navy could roam beyond the Middle East.