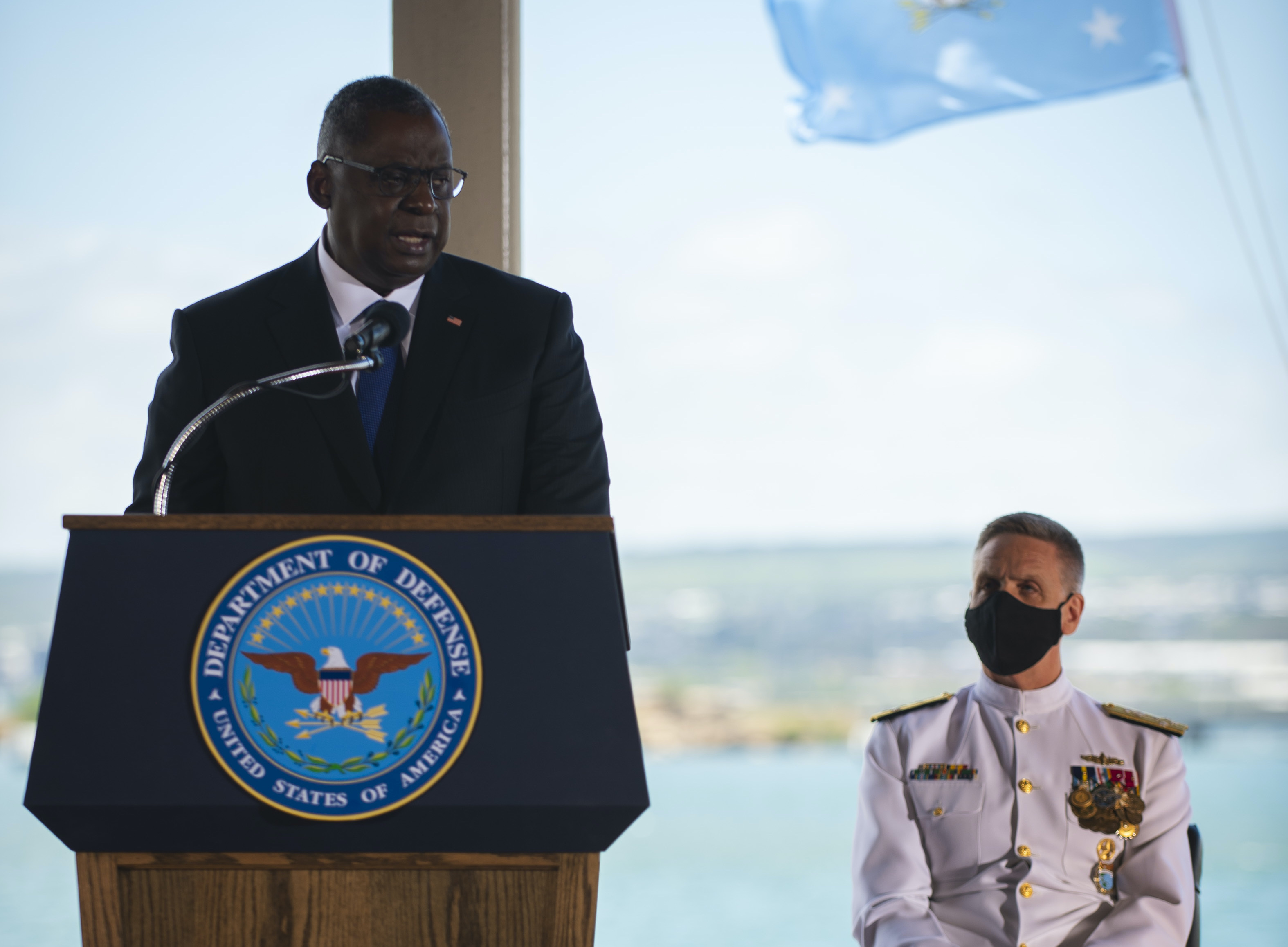 U.S. Indo-Pacific Command welcomed a new commander as Adm. Phil Davidson handed the leadership to Adm. John Aquilino in a Hawaii ceremony while Defense Secretary Lloyd Austin provided his first public comments on how the U.S. military will operate in the region.

Davidson, who is retiring after a 39-year naval career, received a Defense Distinguished Service Medal for his three-year tenure at Joint Base Pearl Harbor-Hickam, headquarters of the largest geographic combatant command.

“Nobody but nobody understands this theater better than him. And nobody but nobody is a better ally and partner,” Austin said, noting the more than 40 “freedom of navigation” operations and over 20 bilateral and multi-lateral exercises held with regional partners during Davidson’s command.

Austin praised Davidson’s “focus on deterrence in the region and the investments that he’s made in our network of allies and partners. He understands we have to think about preventing the future fight, which increasingly is the fight of today – and if we can’t prevent it, we need to be ready to win it, and to win it decisively.”

Earlier in the day, Aquilino relinquished command of the Pearl Harbor-based U.S. Pacific Fleet, which he commanded since 2018. His likely replacement, Vice Adm. Samuel Paparo, has been nominated to be next to lead the Pacific Fleet. Paparo is a career aviator and the current commander of U.S. 5th Fleet based in Bahrain.

Army Gen. Mark Milley, chairman of the Joint Chiefs of Staff, credited Davidson as “a servant and visionary leader. Whether you were assigned to shore or at sea, you’ve always addressed the Navy’s global operations and requirements with the right mix of thought, decisiveness, talent, and you created lasting solutions throughout the neighborhood.”

More than 370,000 service members are assigned to INDO-PACOM, “a critical theater” for the United States, Milley said. “It is really the globe’s crossroads,” he said, noting the region accounts for 60 percent of world trade and 52 percent off the world’s population in 36 countries and an area spanning 14 time zones.

“We all benefit from the rules-based, international order in a free and open Indo-Pacific,” said Milley. 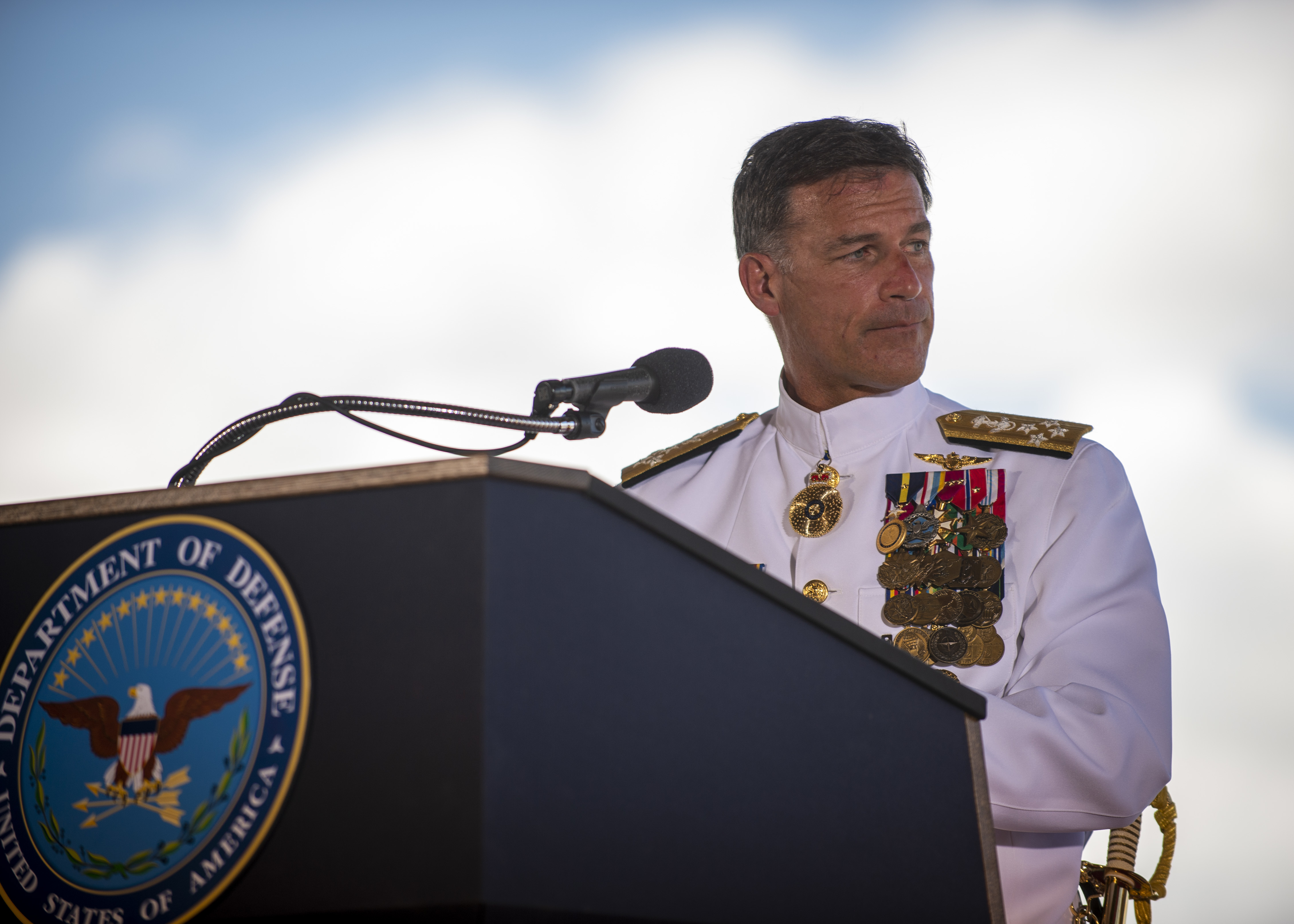 Adm. John Aquilino delivers remarks during the change of command ceremony for U.S. Indo-Pacific Command on April 30, 2021. US Navy Photo

The Indo-Pacific “is the most consequential region for America’s future. It hosts our greatest security challenge, and it remains the priority theater for the United States,” said incoming commander Aquilino, a career fighter pilot and 1984 graduate of the U.S. Naval Academy whose prior commands include Carrier Air Wing 2, Carrier Strike Group 2 and U.S. Naval Forces Central Command, U.S. 5th Fleet, Combined Maritime Forces.

“The foundation of this environment is a rules-based international order in which all nations large and small, have an equal voice for peaceful resolution of disputes and can openly share differences of opinion in order to maintain peace and stability in the region,” he said. “Today, this environment is being challenged.”

But tensions remain high in the region largely due to China’s growing global influence, military capability, and aggressive fleet activities in areas including the South China Sea.

Davidson’s wariness of China’s military intentions is well-known – he told Congress in March of his concern about the threat to Taiwan, a U.S. ally and has advocated bolstering U.S. defenses in the region as deterrence. While neither Milley nor Austin mentioned China by name, Davidson didn’t hesitate to call out Beijing’s ambitions as a grave threat to freedom and liberty and disruptive to international order.

“Liberty is the idea that we will come together in order to defend the collection of freedoms necessary for a people, a nation, even a region to prosper, thrive and survive. At the heart of it, liberty is freedom from authoritarianism from those who would restrict or eliminate our freedoms,” he said.
“Make no mistake: The Communist Party of China seeks to supplant the idea of a free and open international order with a new order – one with Chinese characteristics, one where Chinese national power is more important than international law. Beijing’s very pernicious approach to the region includes a whole-of-party effort to coerce, corrupt and co-opt governments, businesses, organizations and the people of the Indo-Pacific.”

Davidson added: “We have made it the work of INDO-PACOM to deter our adversaries, strengthen our alliances and enhance our emerging partnerships across the Indo-Pacific.” 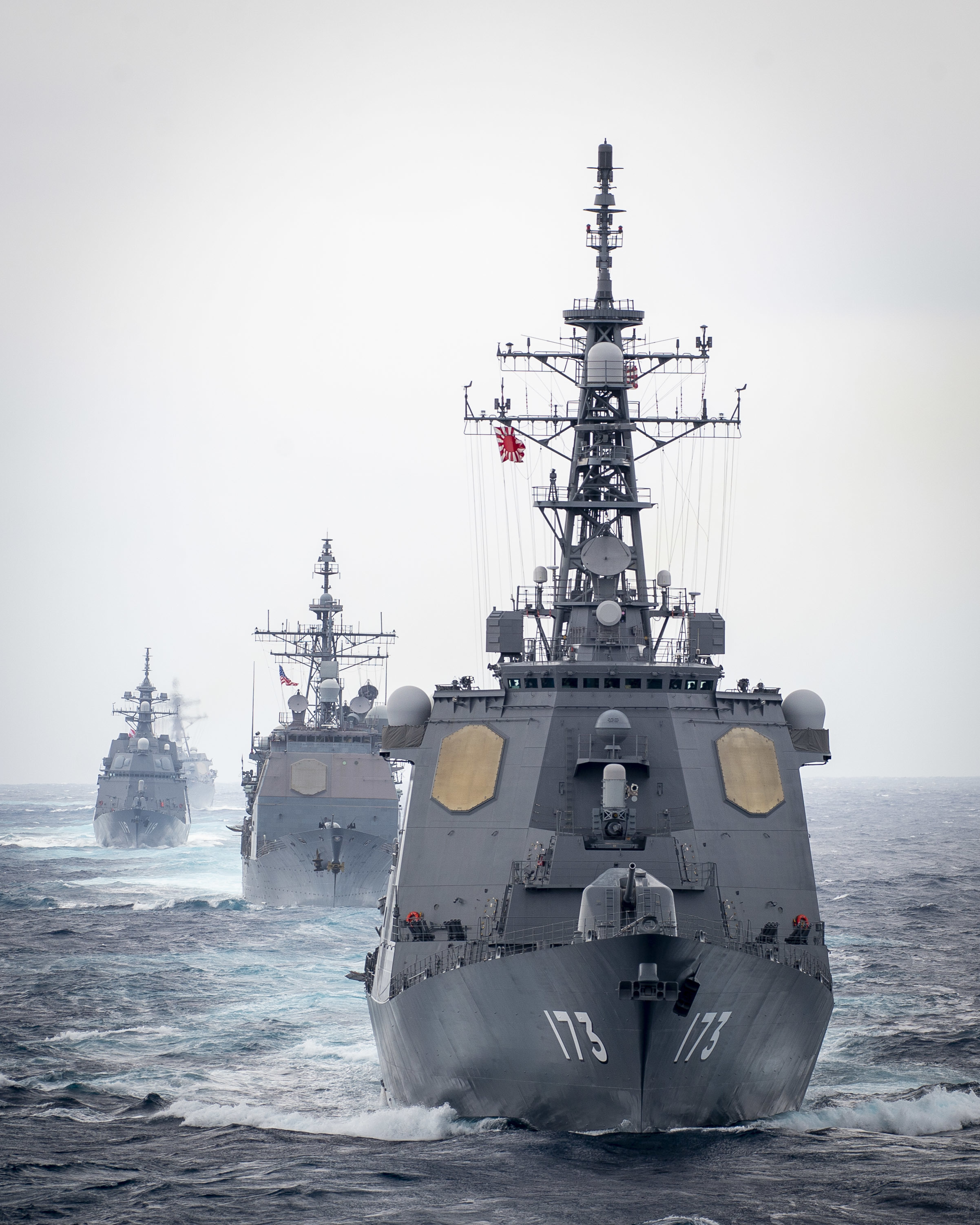 And as it has in the past, the United States won’t be going at it alone in INDO-PACOM.

“Deterrence now demands far more coordination, innovation and cooperation from us all,” Austin told the audience that included several ambassadors and defense chiefs, including from Japan and the Republic of Korea. “Under this integrated deterrence, the U.S. military isn’t meant to stand apart, but to buttress U.S. diplomacy and advance a foreign policy that employs all of our instruments of national power. As the president of the United States has made clear, diplomacy must come first, and the use of force must be a very last resort.”

Austin, a retired Army general and former commander of U.S. Central Command, spoke about the fast-changing, tech-driven environment that demands “new thinking and a lot of new action from us all.”

“The way we’ll fight the next major war is going to look very different from the way that we fought the last ones,” he said in a 22-minute address that outlined his vision for the military to counter threats in every warfare domain. “We all need to drive toward a new vision of what it means to defend our nation. In this young century, we need to understand faster, decide faster and act faster. Our new computing power isn’t an academic exercise. This is about real-world, real-time advantages—about fully grasping a situation moving at the speed of war.

“Galloping advances in technology mean changes in the work that we do to keep the United States secure across all five domains of potential conflict—not just air, land, and sea, but also space and cyberspace. They mean we need new capabilities and capacities and operational flexibility for the fights of the future. And they mean that we have to redouble our efforts to work together—across commands, across services, and across stovepipes,” he said.

That deterrence comes in a complex battlespace where rapidly-changing technology and artificial intelligence are “changing the character of warfare itself,” he said, and “at a time when our potential adversaries are very deliberately working to blunt our edge. And so our challenge is to ensure that our deterrence holds strong for the long haul, across all realms of potential conflict.”

Winning the future fight will require “the right mix of technology, operational concepts and capabilities—all woven together and networked in a way that is so credible, so flexible and so formidable that it will give any adversary pause,” said Austin. “We need to create advantages for us and dilemmas for them, and And that kind of truly integrated deterrence means using some of our current capabilities differently. It means developing new operational concepts for things we already have, and it means investing in quantum computing and other cutting-edge capabilities for the future, in all domains.”