The Navy is pursuing both manned and unmanned platforms for the aircraft that will replace its rotary-wing fleet, according to a service official.

Rear Adm. Gregory Harris, who leads the chief of naval operation’s air warfare directorate (OPNAV N98), said during a Navy League breakfast this week that the service’s Future Vertical Lift program will include a family of systems, an approach similar to the one it’s taking for the Next Generation Air Dominance program.

“We are working on what we’re calling Future Vertical Lift maritime strike – which is a family of manned and unmanned systems which will be a key component of our distributed maritime operations,” he said. “We are early in the stages of doing our development for that.”

Harris said the Navy has hosted sessions with industry to discuss Future Vertical Lift and the service plans to start an analysis of alternatives (AOA) this fall.

The MH-60R and MH-60S helicopters – which the FVL program is meant to replace – will come to the end of their service lives during the later part of the 2020s, Harris said.

The Army, Navy and Marine Corps are all pursuing FVL, but Harris pointed to the Navy’s specific requirements – the service’s platform must operate off of the fleet’s cruisers and destroyers, a constraint that restricts the weight and size of the aircraft. 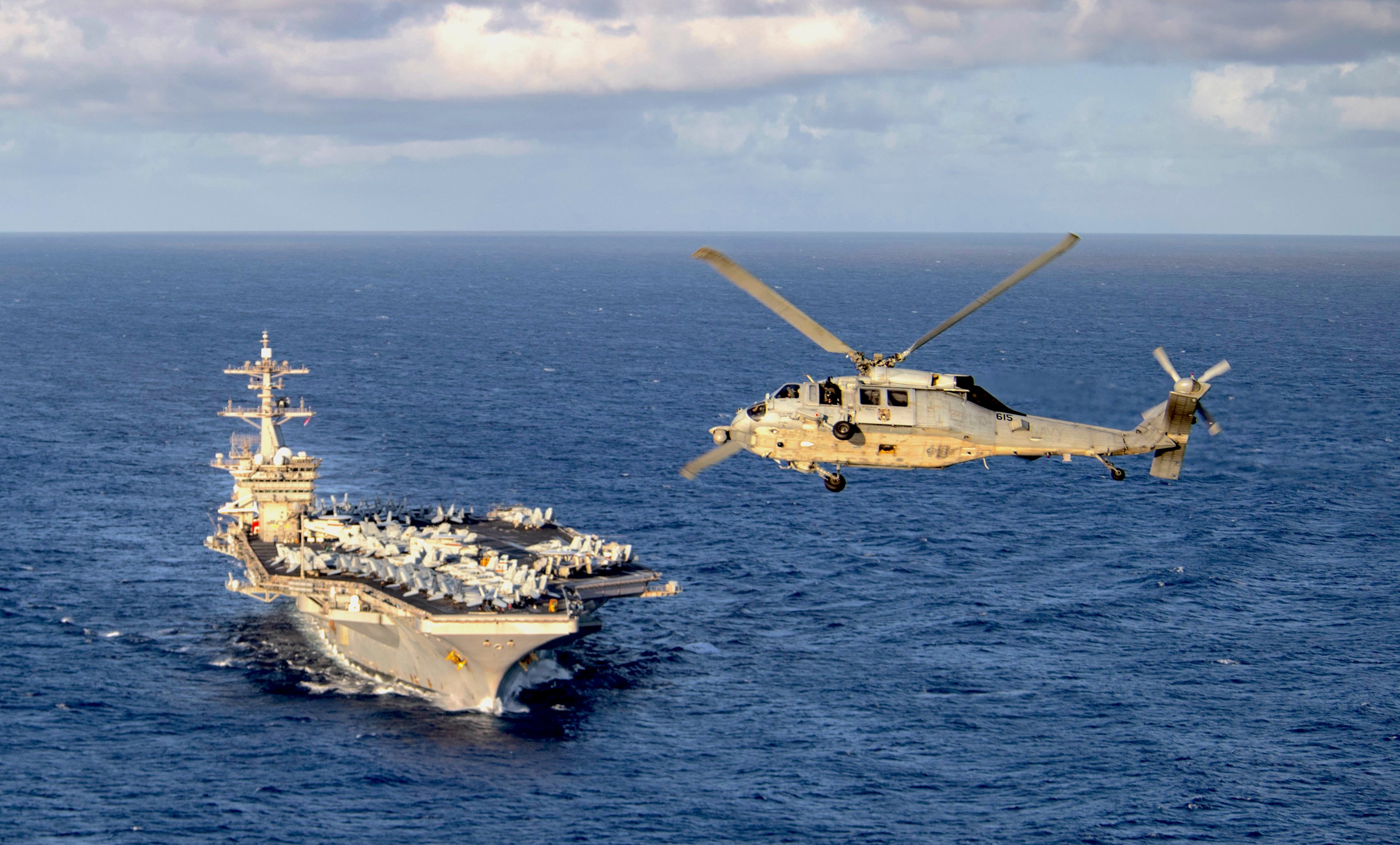 An MH-60S Knight Hawk, assigned to the ‘Eightballers’ of Helicopter Sea Combat Squadron (HSC) 8, flies in front of the aircraft carrier USS Theodore Roosevelt (CVN-71) on Jan. 31, 2021. US Navy Photo

“There is a lot of commonality across [the Defense Department] with the other Future Vertical Lift programs that are out there. But we recognize that there are different missions for the Navy – different challenges we have, in particular the need to be getting on and off our surface combatants, whether that’s our destroyers, our future large surface combatant, or FFG(X),” Harris said. “And so we’ll try to take advantage of as many of those common areas we have, particularly with the Marine Corps as they go after their MALE, their medium-altitude long-endurance system. And where we can find those commonalities, we’ll take advantage of that to drive costs down and to increase commonality across all of those pieces.”

The Marine Corps was pursuing its Marine Air-Ground Task Force (MAGTF) Unmanned Aerial System (UAS) Expeditionary program, or MUX, which was the service’s version of the Navy’s FVL effort. But last year, the Marine Corps scrapped its original plans to immediately develop a large ship-based UAV. Recently, the Marine Corps has been operating the MQ-9 Reaper, a group 5 UAV flown by the Air Force, and plans to take lessons learned from using that platform and apply them to developing MUX, or its medium-altitude long-endurance system (MALE).

Harris said that while the requirements for the Navy and Marine Corps’ respective platforms started to deviate, the two services are now moving toward a more common approach.

“The Marine Corps has kind of converged back on a size and a weight – so the size of the aircraft, the weight of the aircraft has to be able to carry, the distance, speed, range – all of those requirements have converged back into a package that is more likely able to be operated off of a surface combatant,” Harris said.

“For the Navy, it’s very important that we have lift capability going off and onto our DDGs, our cruisers and our follow-ons to those . . . surface vessels. So that is at least one of the limitations that we have – a DDG-sized hangar space for our Future Vertical Lift,” he added.

The Marine Corps originally saw MUX as a Group 5 UAV that would operate off of the Navy’s amphibious ships for a wide array of missions. But as it pursued the program, the service saw the difficulty in executing its numerous requirements with one air vehicle at an appropriate cost.

Deputy Commandant of the Marine Corps for Aviation Lt. Gen. Mark Wise in September said the service still expects to have Group 5 UAV capabilities under the aviation combat element, but that the Marines are putting the smaller UAVs into the ground combat units.

Now that the two services are pursuing more shared requirements, Harris said they can work together to tackle the unmanned part of the program first, which was not the Navy’s original plan.

“With that convergence of requirements, that starts to open up some trade space for how the Navy and the Marine Corps look at it. We were looking at our unmanned portion being farther out to the right and our manned portion being the first instantiation,” he said. “I think we’re actually going to flip that on its head. We’ll take a look at the unmanned portion first so that we can marry up with our Marine Corps brethren and get after that aspect of future vertical lift earlier.”

As for combining manned and unmanned platforms, Harris said the Navy’s MQ-8C Fire Scout, which the service plans to operate off of Littoral Combat Ships this year, will help develop FVL.

“The lessons that we learn from Fire Scout and her integration into the fleet will certainly feed into our Future Vertical Lift replacement,” he said.

But the Navy and Marine Corps could have varying requirements when it comes to the payloads the platforms would transport, Harris said, pointing to the Marine Corps’ unique plans for its Expeditionary Advanced Base Operations (EABO) concept. EABO sees the Marines moving between expeditionary bases set up on islands in the Pacific, for example.

“Where I see the differences as they start looking at their Future Vertical Lift, or their MUX – MALE capabilities, their medium-altitude long-endurance system, where those requirements start to change what payload they want to be able to carry to support their EABOs, their expeditionary air basing options,” he said of the Marine Corps. “As they’re moving around and trying to be a dynamic inside a threat environment, the fuel ordnance that they need that system to carry to their front-end platforms and personnel will adjust what we the Navy need to be able to get on and off-board.”

Harris noted the Navy moves many small loads that are below 40 pounds and said there are more cost-efficient ways of transporting these parcels, like the drones Amazon uses. At the direction of deputy chief of naval operations for warfighting requirements and capabilities (OPNAV N9) Vice Adm. Jim Kilby, Harris said he is creating a consortium that would show all of the Navy’s small UAVs, so the service can more effectively find what type of drone it needs to accomplish a task.

In February, Naval Air Force Atlantic (AIRLANT) used aircraft carrier USS Gerald R. Ford (CVN-78) to perform a logistics test with a UAS. According to AIRLANT, 90 percent of the electronic replacement parts the Navy moves during logistics transports are below 50 pounds.

“It’s difficult because of the proliferation we have of small unmanned systems across a wide variety of the naval service,” Harris said.