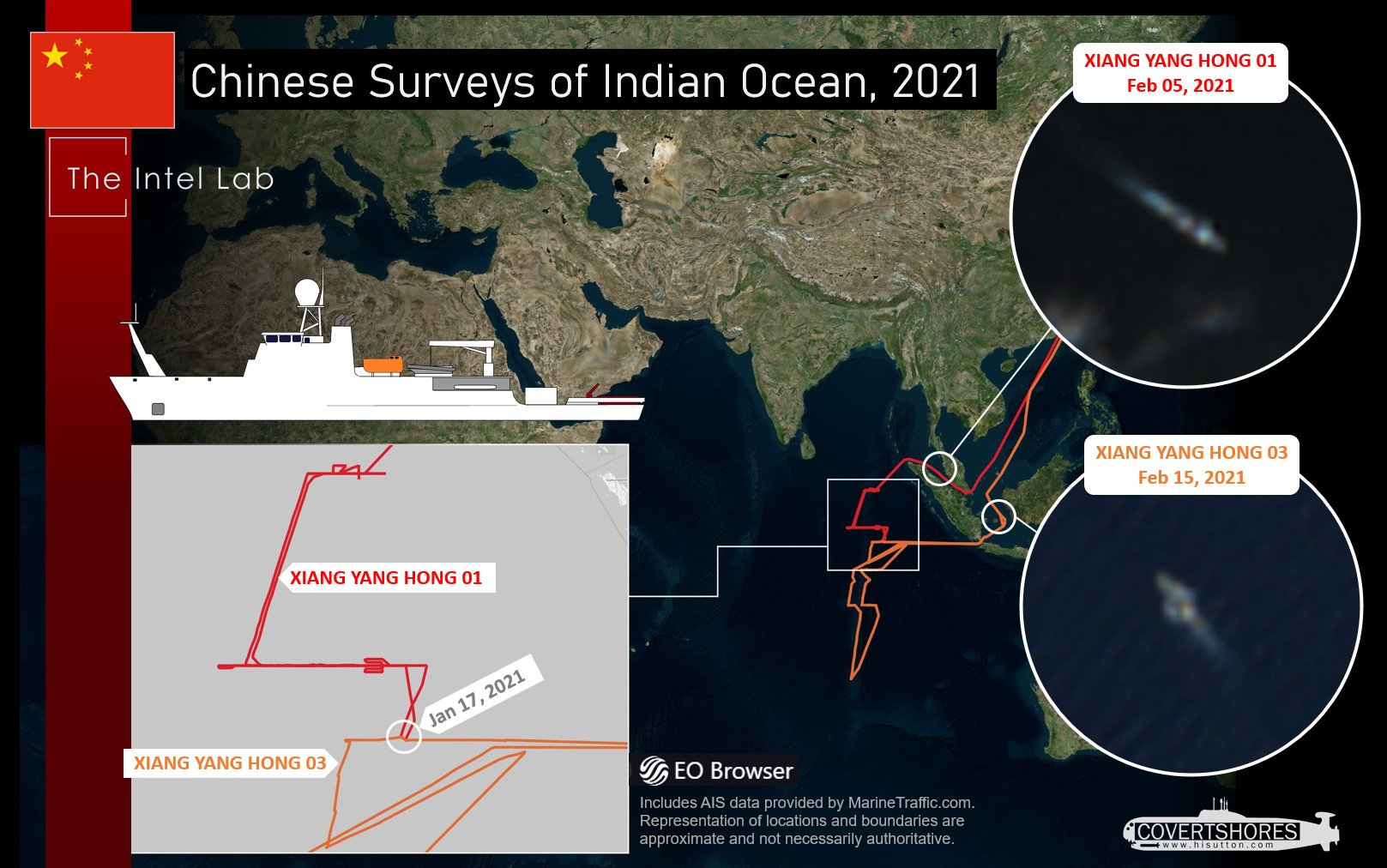 China is gathering data on the undersea environment in the Indian Ocean as evidenced by two government survey ships seen operating in the region via open source satellite photos.

These survey activities may be aimed at giving Chinese submariners an advantage in their area.

In January, a Chinese survey ship was accused of “running dark” – a term used to describe a ship operating without transmitting its position – in Indonesia waters. That was against a backdrop of several Chinese underwater drones turning up in Indonesian sovereign waters. That survey ship, Xiang Yang Hong 03, was heading toward the Indian Ocean.

What wasn’t reported was that its sister ship, Xiang Yang Hong 01, was also active in the Indian Ocean at the time, Analysts have been plotting their movements using open source Automated Identification System (AIS) data and satellite imagery.

Both ships are relatively new, joining the fleet in 2016. Since then, they have been regularly active, especially in the Indian Ocean region. They are joined by others from the increasingly far-traveled fleet of oceanographic ships operated by China’s State Oceanic Administration.

The survey ships may not have an overtly military mission, but the data gathered will likely be of particular interest to the People’s Liberation Army Navy (PLAN). Ocean survey data is both useful to military and civilian interests.

China has been systematically surveying vast swathes of the Indian Ocean. They are paying particular interest to surveying the Ninetyeast Ridge, an underwater mountain range that cuts down through the Eastern Indian Ocean from north to south. The range is particularly relevant for submarine operations. If Chinese submarines are going to increase their activity in the Indian Ocean, these maps may aid the sub’s survivability.

The area is also likely to be of interest to countries in the area that are operating submarines, including India, Indonesia and Australia. With the realignment of U.S. Pacific Command into U.S. Indo-Pacific Command, it may also signal more future U.S. Navy operations.

Despite the “running dark” incident, the ships have been declaring their position as a civilian ship is expected to. Open source intelligence analysts at The Intel Lab have continued monitor the ships. AIS data shared by MarineTraffic.com shows the tracks of the ships in great detail.This has been combined with imagery using Sentinel-2 satellites to form a fuller picture.

Xiang Yang Hong 01 transited the Malacca Strait and operated further north than its sister ship. It ran mostly straight line runs at around nine knots. There were multiple times where Xiang Yang Hong 01 stopped and tracked back, before resuming its original course. This may be indicative of a sensor malfunction, especially with a towed sensor.

Xiang Yang Hong 03 took the Sunda Strait through Indonesia and surveyed further south, according to the tracks. Like Xiang Yang Hong 01, it mostly surveyed in long straight lines running along and across the Ninetyeast Ridge.

On Jan. 17 the two ships met far out in the Eastern Indian Ocean. The interaction was brief, lasting only a few hours in the early afternoon. The purpose of the rendezvous is unclear. It may have been to transfer personnel or equipment. The short meeting indicates the encounter was less likely to have been a serious exercise or training opportunity but does highlight the proximity and complementary nature of the two ships’ missions.

Chinese survey ships are becoming a more common sight across the world’s oceans. They are often involved in commercial or international scientific work, like climate science. But in other cases China could be gathering data for military reasons.