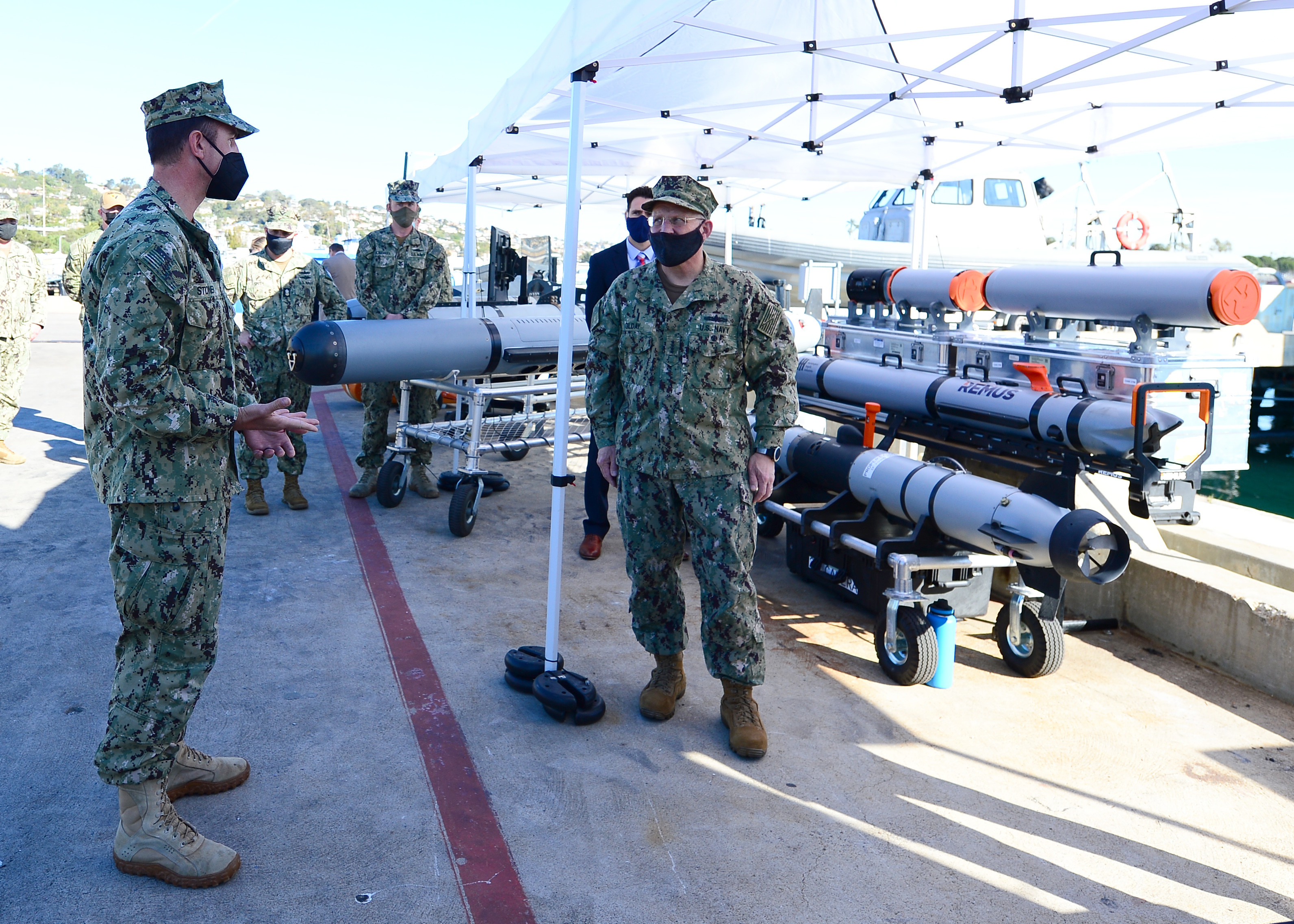 When the aircraft carrier USS Nimitz (CVN-68) pulls into its homeport at Bremerton, Wash., in the coming days, the ship and crew will mark the end of a deployment cycle away from home stretching some 341 days – not quite a record-setter, but still one for the history books.

The length of the deployment was affected by current events both on the front end and the back end. Sailors had to leave their families for the scheduled 2020 deployment two months earlier than the planned June start, when Navy restrictions in response to the global COVID-19 pandemic required sailors to remain aboard ship throughout pre-deployment training and certification exercises. Its final months stretched into 2021 as Nimitz operated amid diplomatic tensions in the Middle East and the U.S. presidential transition of power at home.

Chief of Naval Operations Adm. Mike Gilday, on a trip to Southern California this week, visited Nimitz and met with sailors Wednesday in what he noted was their 329th day away from home. Nimitz‘s time at sea for deployment and related activities will be “the longest we’ve seen in decades,” Gilday said during a short evening media call with reporters.

Rear Adm. James Kirk, who commands Carrier Strike Group 11 aboard flagship Nimitz, led the force through the deployment and missions in the U.S. 7th and U.S. 5th Fleet areas of responsibility. “We accomplished a great deal,” Kirk said during the media call. “We stood the watch for the Navy and the nation in the Indo-Pacific region and in the CENTCOM AOR. We contributed to security in both those theaters at a time of tension and a time of transitions.”

Nimitz, along with its carrier air wing and strike group, provided support to U.S. Central Command through the redeployment, reduction and repositioning of U.S. forces in Afghanistan, Iraq, and Somalia, including support to Operation Octave Quartz, the mission overseeing the repositioning of forces from Somalia. The carrier strike group joined with USS Theodore Roosevelt (CVN-71) twice and USS Ronald Reagan (CVN-76) once while operating In the western Pacific, “demonstrating our commitment to a free and open Indo-Pacific region,” Kirk said.

The 5,000-plus sailors and Marines of the strike group “demonstrated what is possible with the teamwork and the focus on mission,” Kirk said. “Our sailors and Marines [operated] alongside each other under kind of challenging conditions with the COVID mitigations that are onboard the ship and that we’ve been living with for some time.”

That’s included very limited time to get off the ship and rest their sea legs, with port calls largely canceled as part of the Navy’s COVID-19 mitigation strategy.

Part of the strike group – Nimitz, Carrier Air Wing 17 and guided-missile cruiser USS Princeton (CG 59) – pulled into Manama, Bahrain, for a working port visit from Oct. 7 to 11 to take care of logistics, resupplies and maintenance, according to the Navy. It marked the first carrier to visit Bahrain since the pandemic began. Sailors and Marines got to stretch their legs only in designated areas on the pier, to keep in line with COVID-19 mitigation protocols. 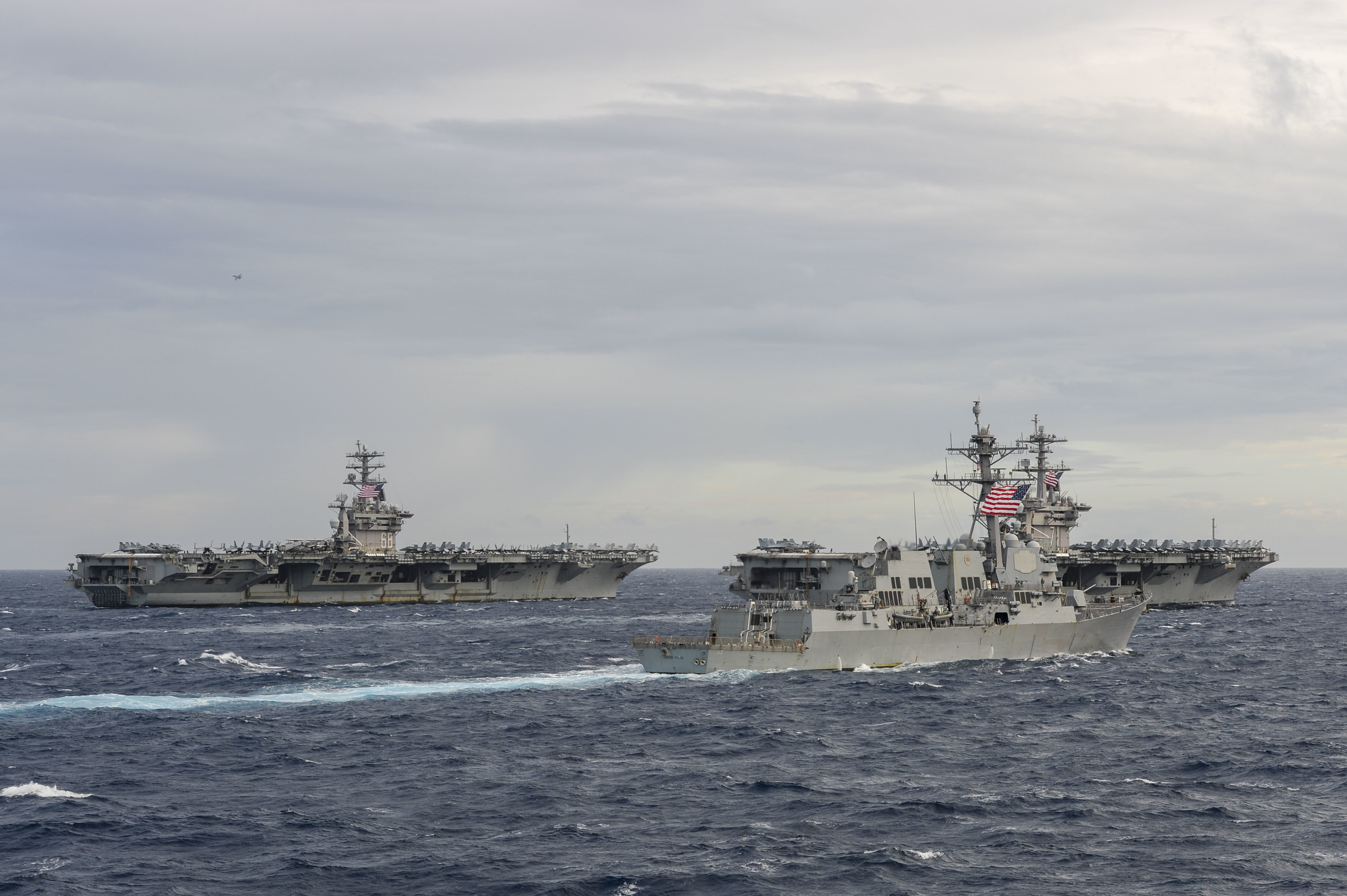 CENTCOM “is fundamentally a maritime theater,” Gilday said during the call. Commodities including oil pass through three “critical” chokepoints – the Strait of Hormuz, Suez Canal and Bab el-Mandeb Strait – so any disruption can affect global markets. And there’s growing competition in the region, including from China and Russia, “that we can’t ignore.”

Since Nimitz left the Persian Gulf in late January, the region has gone without U.S. aircraft carrier presence. Just how much – or how constant – presence the Navy will provide with its carriers in the future remains to be seen, but it likely “will take a lower priority than it has in the past,” he said. “I think the (National Defense) Strategy has been pretty clear about that. However, the adversary or other actors always get a vote.”

But the 18 months after the U.S. pulled out of the Joint Comprehensive Plan of Action, or the Iran nuclear deal, “has driven the near-continuous carrier presence in the theater since the summer of 2019,” Gilday added.

Officials noted that Nimitz spent time in the Persian Gulf region during a critical time for the U.S. military as it drew down forces from Afghanistan and Iraq and repositioned troops in Somalia.

“Those are three high-risk evolutions going on at the same time when we have a presidential transfer of power in the United States and heightened rhetoric between the United States and Iran,” Gilday said. “It was prudent to keep the Nimitz on station to make sure that our president and decision-makers had options, should something come up, as well as deter those actors from doing anything rash.”

The Biden administration will take a fresh look as it assesses U.S. forces and global presence, part of the Global Force Posture Review ordered by Defense Secretary Lloyd Austin earlier this month.

“I think it’s going to be a very deliberate, thoughtful approach of what the long-term presence is going to be,” Gilday said. “One of the great things that the Navy brings to bear against problem sets like Iran is that we’re maneuverable. We can move from theater to theater. We can move from the Bay of Bengal back to the Arabian Sea, and we can move from the Mediterranean and back and forth. So my recommendation would be for us to be a bit more dynamic and a bit less static, with respect to how we posture ourselves.”

“If we do that, you can maintain the kind of balance… with respect to maintenance and readiness, and at the same time you can posture the joint force rather adeptly against a number of problem sets, including China, Russia, Iran and North Korea.” 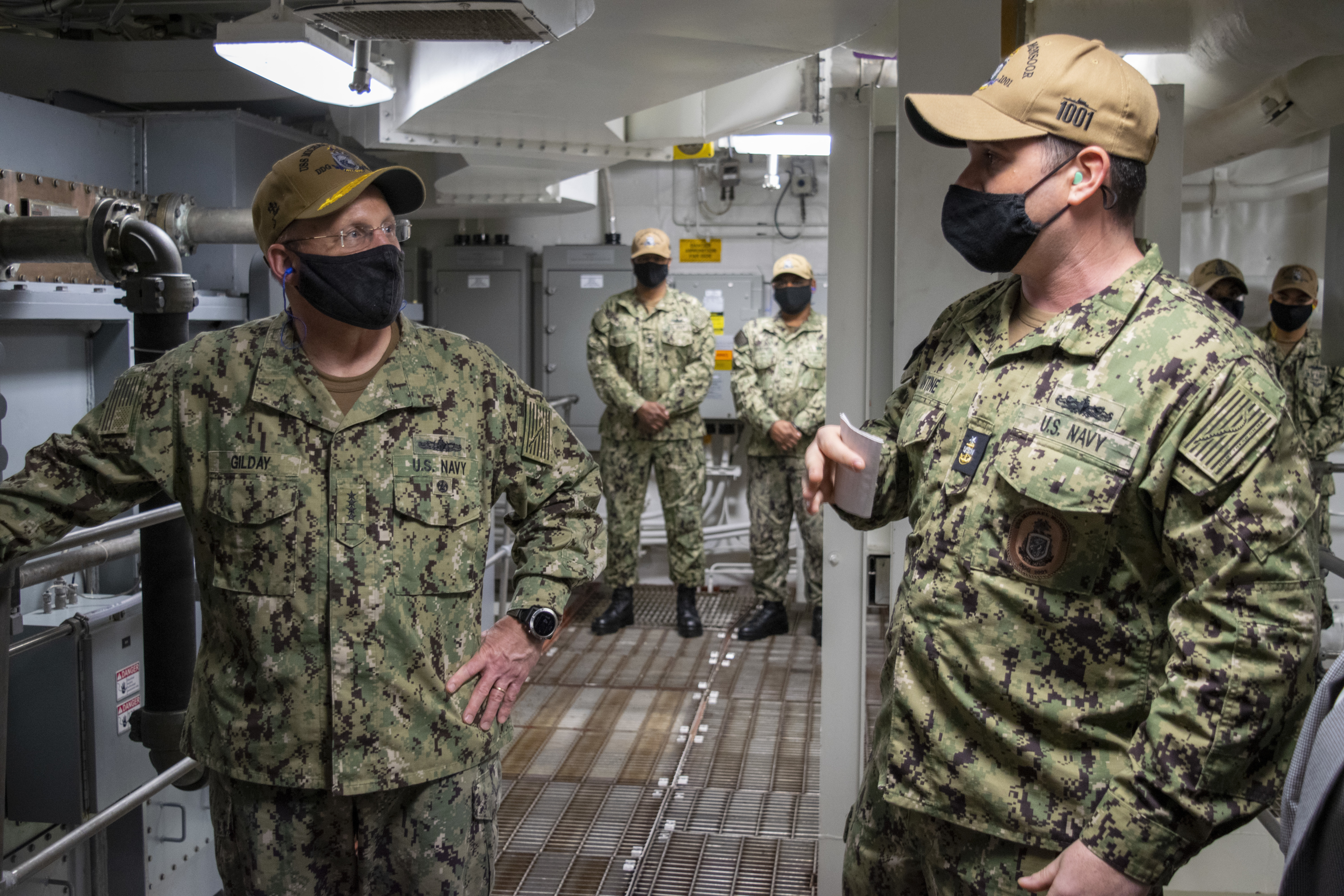 Today marks 330 days at sea for Nimitz, and though not all of that time is considered on deployment, that distinction is of little comfort to the sailors and their families. Typically, sailors would go to sea for a final pre-deployment exercise and certification event, return home for some amount of time, and then regroup and deploy. With COVID, though, the Navy deemed it was safest to have the sailors conduct a 14-day restriction of movement (ROM) period to help ensure they didn’t pick up any new cases of the virus, while catching existing cases through COVID testing at the beginning and the end of ROM. Once the ROM ended, the sailors were considered to be in a COVID-free bubble, and to avoid contaminating the bubble, they conducted their final exercise and then stayed at sea and went straight into deployment – not extending the official length of the deployment, but extending their time away from home by about two months.

Gilday said there would be some relief here as the fleet becomes vaccinated against COVID-19.

“A real key to getting rid of the ROM period is getting ships 100-percent vaccinated,” Gilday said.

But the Defense Department’s reported average is about 70 percent for taking the vaccine, which remains voluntary since it yet hasn’t received full FDA approval.

“Many ships that we’ve offered the vaccine to (had) a 95 percent-plus ‘take rate’ on the vaccine,” Gilday said. “If we get that kind of take rate … [that] will allow us to relieve the command or relieve those ships of a number of requirements, including potentially the ROM sequester of 14 days. And that’s what we really want to do.”

“We’ve put out guidance within the past week that essentially states the same, that will begin the sundown of the ROM sequester period for those ships that have a high take rate on the vaccine,” the CNO continued.

Gilday also spoke more broadly about lengthy deployments, saying that if he had it his way, sailors and their ships would be deployed away from home for seven to eight months, a period more in line with the norms ship crews and command leaders alike expect.

“I still shoot for and plan for deployment lengths that are between seven and eight months,” Gilday said. His goal is a 1:2 deployment-to-dwell time at home, so a seven-month deployment would follow with 14 months at home, which could include maintenance or pre-deployment training for subsequent overseas duty.

Work at the public and private maintenance yards is a big factor here, Gilday said. If carriers, cruisers, destroyers and submarines would get “into the shipyards on time, we can maintain readiness,” he said, and keep to a more predictable personnel deployment tempo for sailors. 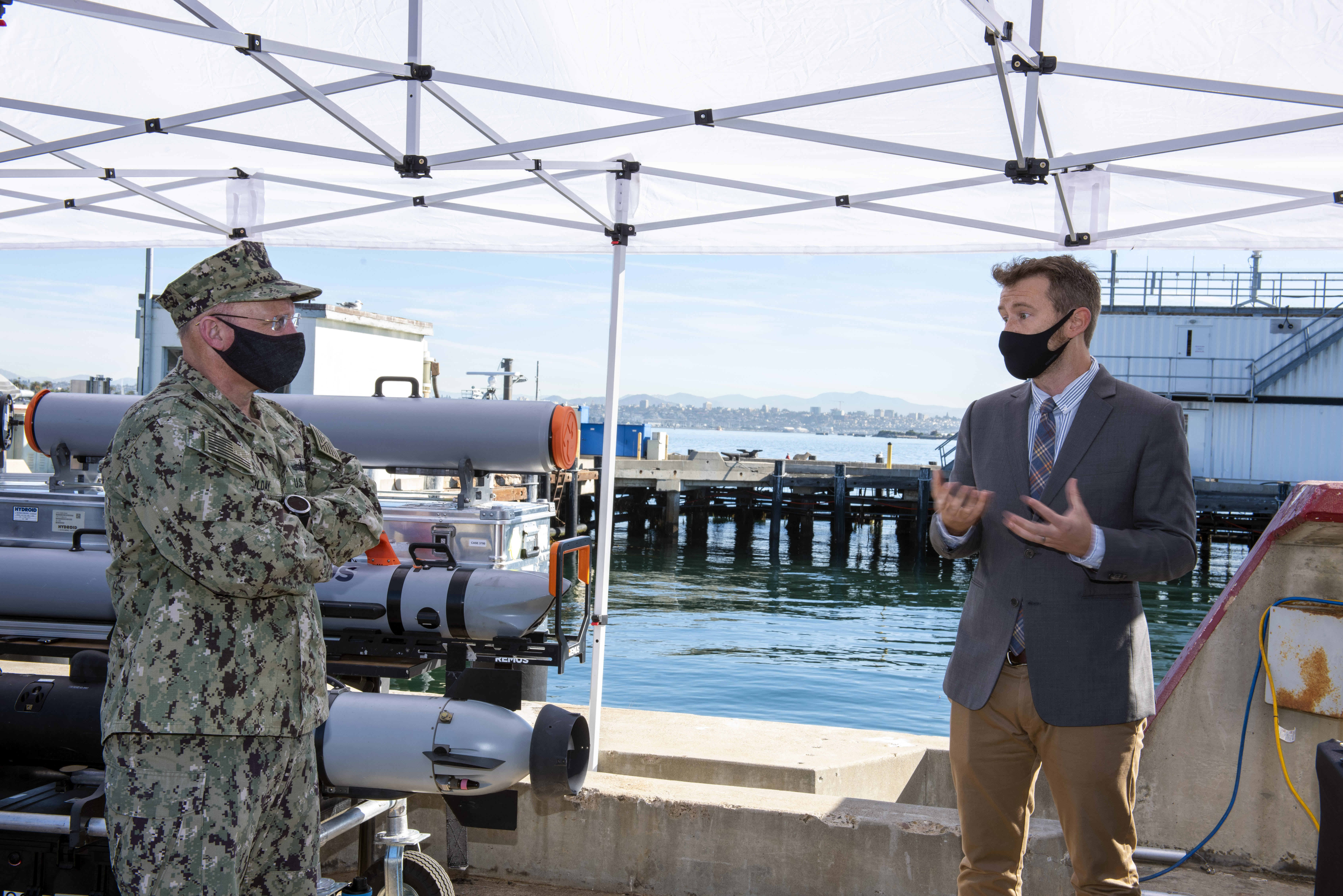 At Camp Pendleton, he met Wednesday morning with U.S. 3rd Fleet commander Vice Adm. Scott Conn and I Marine Expeditionary Force Commander Lt. Gen. Karsten Heckl to discuss the recently completed force-level exercise Winter Fury and plans for follow-on training that will include a Large Scale Exercise. That event will be “a physical exercise at sea, with multiple carrier strike groups and multiple [amphibious ready groups],” he said. “That will hopefully allow us to test some of these new concepts that we’re working to mature: Distributed Maritime Operations for the Navy that of course is intertwined with Expeditionary Advanced Basing Operations that the Marine Corps is moving forward under the commandant’s plan.”

They will have to work through some of the lessons learned from Winter Fury and other recent training events that have included more use and the integration of technologies like autonomous and unmanned systems.

“I think some of the challenges involve some capabilities we’re trying to weave into these exercises, including unmanned,” Gilday said. “So we are trying to move as fast as we can to both mature the concept and to learn what we can learn, to learn everything we can from integrating new technologies into those training periods.”

“We are highly optimistic about the direction that we are headed in, and the cooperation again at every echelon has been very very good.”