After coming through 2020 with record sales and growing its unmanned systems portfolio through acquisitions and partnerships, Huntington Ingalls Industries plans to use that momentum in 2021 to integrate its different business lines to help its customers tackle more complex challenges, the company president said today.

Noting the hardship of the pandemic in 2020 but the optimism of coming through it in a strong position, HII President and CEO Mike Petters told investors in a company earnings call today that, “from the very beginning, we viewed COVID-19 as a human capital crisis, and we made the decision to give the workforce the flexibility they needed to deal with the disruption in their personal lives. This, in turn, allowed us to preserve the significant investment we have made over the past five years hiring, training and qualifying our workforce so that they would be available to execute our record backlog as we emerge from the pandemic. After finishing 2020 with two consecutive strong quarters, I am convinced more than ever that we have a very solid foundation and a bright future for our business.”

Among the 2020 achievements that Petters described were delivering two Navy and one Coast Guard ships; and bolstering its standing in the unmanned market by acquiring companies Hydroid and Spatial Integrated Systems, developing a strategic alliance with a third company, Kongsberg Maritime, and breaking ground on its Unmanned Systems Center of Excellence in Hampton, Va.

Additionally, Petters said, “sales of $2.8 billion for the quarter and $9.4 billion for the full year were approximately 14- and 5-percent higher than 2019, respectively, and they represent record highs for the company.”

These record sales helped create a record backlog of $46 billion in shipbuilding, ship maintenance, nuclear energy and other work.

Though the company is in a strong position, Petters said the company this year will add a new chief operating officer position to begin to integrate the main business lines – Ingalls Shipbuilding in Mississippi, Newport News Shipbuilding in Virginia, and the Technical Solutions business that is increasingly focused on unmanned technologies. Christopher Kastner, HII’s chief financial officer, will take over the COO job later this month.

USS Gerald R. Ford (CVN-78) is pulled from its berth at the Huntington Ingalls Industries at Newport News Shipbuilding, Va; into the James River on Oct. 25, 2019. Ford is passing the former USS Enterprise (CVN-65). USNI Photo by Mark D. Faram

“I see this as the next step in the maturation of HII. Our governance model has typically been very federated, pushing as many decisions as far away from the center of the company as possible. But what we are hearing from our customers is that they are looking for us to be able to bring different parts of our business together in order to solve their complex problems,” Petters said during the call.
“They actually see us as more of an integrated whole than a collection of businesses, and it’s up to us to find ways to create value from this opportunity set by smartly collaborating across our shipbuilding and technical solutions segments.”

Asked for more details later in the call, Petters added that “what we were hearing from our customers is, this capability in this part of your business is something we could use in this part of your business; whether it was the way we were buying material, or a technology we were looking at, additive manufacturing, maybe some artificial intelligence, our information management systems, those kinds of things,” he said.
“There were several of those that, when they added together, it just made more sense for us to start thinking about it.”

Petters said he had been thinking about moving the company in this more integrated direction for a few years and that the time was right now, as the Navy, Coast Guard and other customers were being asked to do more amid tight budgets.

“They’re starting to become a little bit more integrated, and the problems they’re facing are becoming more complex, and so as a result we need to bring a more integrated approach to solving that.”

Despite the record-breaking business HII did during 2020, the COVID-19 pandemic did create some setbacks for the company. Specifically, Petters announced in an August call that, with about 35 percent of the hourly production workforce not showing up on any given day due to being ill, being in quarantine, taking care of children who were home from school and more, the shipyard had to prioritize which projects to keep on track and which to let slip. In consultation with the Navy, the Newport News Shipbuilding yard prioritized repair work on submarines and the refueling and complex overhaul of aircraft carrier USS George Washington (CVN-73) over building new submarines. As a result, the Virginia-class program took a financial hit, and sub construction timelines slipped in some cases by two or three months, in some cases by two or three quarters on the fiscal year calendar.

Today, Petters said that the company had laid out a new pace for Virginia-class SSN construction and that Newport News Shipbuilding was staying on that pace and meeting milestones “with gusto.” 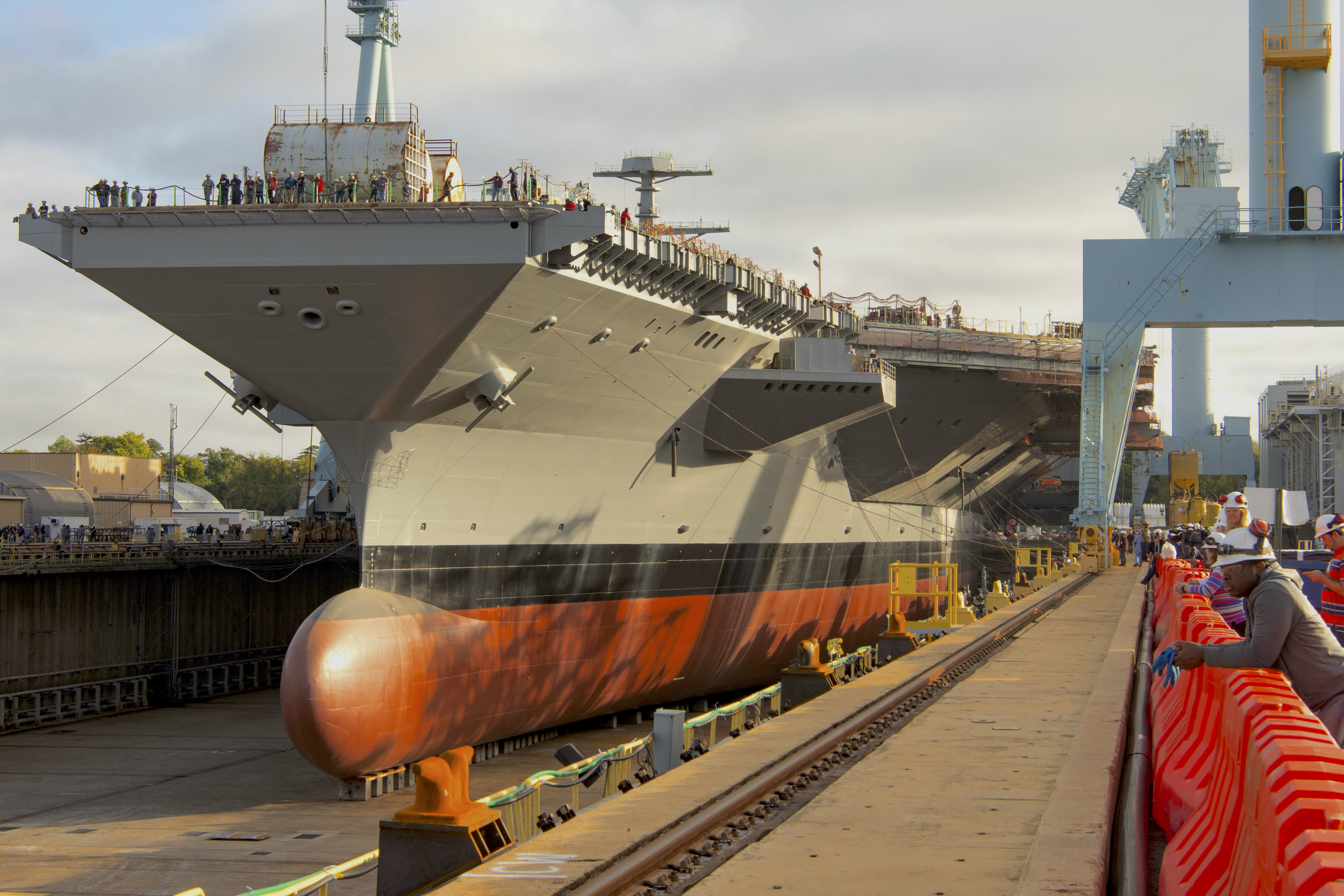 Petters said HII would support the Navy in whatever it decided to build, but indicated supercarrier construction would continue.

Though the Navy at several points over the past 60 years has questioned whether a conventional carrier would be more affordable, Petters said the question remains, “can you get 80 percent of the capability for 80 percent of the cost? The answer is almost always no, because it turns out that the cheapest thing that we do in the carrier business is build volume – and so if you want to take a carrier that’s 100,000 tons and you want to drive it to, pick a number, 60 or 70,000 tons, and you want to take the reactors off of it, you’ve just completely changed the capability set, and you’re still going to spend a lot of money building that 60,000-ton ship.”

Petters said he thinks the Navy is taking a serious look at light carriers today and “we stand ready to support the Navy in whatever their mission is and wherever they need to go.”

But, he added, “we’re very proud of the [USS Gerald R. Ford (CVN-78)], and I would tell you that as a lead ship the Ford cost was too high. We made significant capital investments to drive that cost down inside the shipyard, and we’ve taken 15 percent of the man-hours out of the [future USS John F. Kennedy (CVN-79)], between Ford and Kennedy, and we’ve streamlined the supply chain. And so we’re taking cost out of that ship.”

Additionally, he said the Navy has repeatedly said it would save $4 billion from buying Enterprise (CVN-80) and Doris Miller (CVN-81) in a two-carrier contract, in addition to the savings the shipyard will see as it applies lessons learned to make each ship more efficient than the last.

“As the Ford (class) becomes more affordable, that makes that comparison become even tougher,” Petters said of the light carrier.