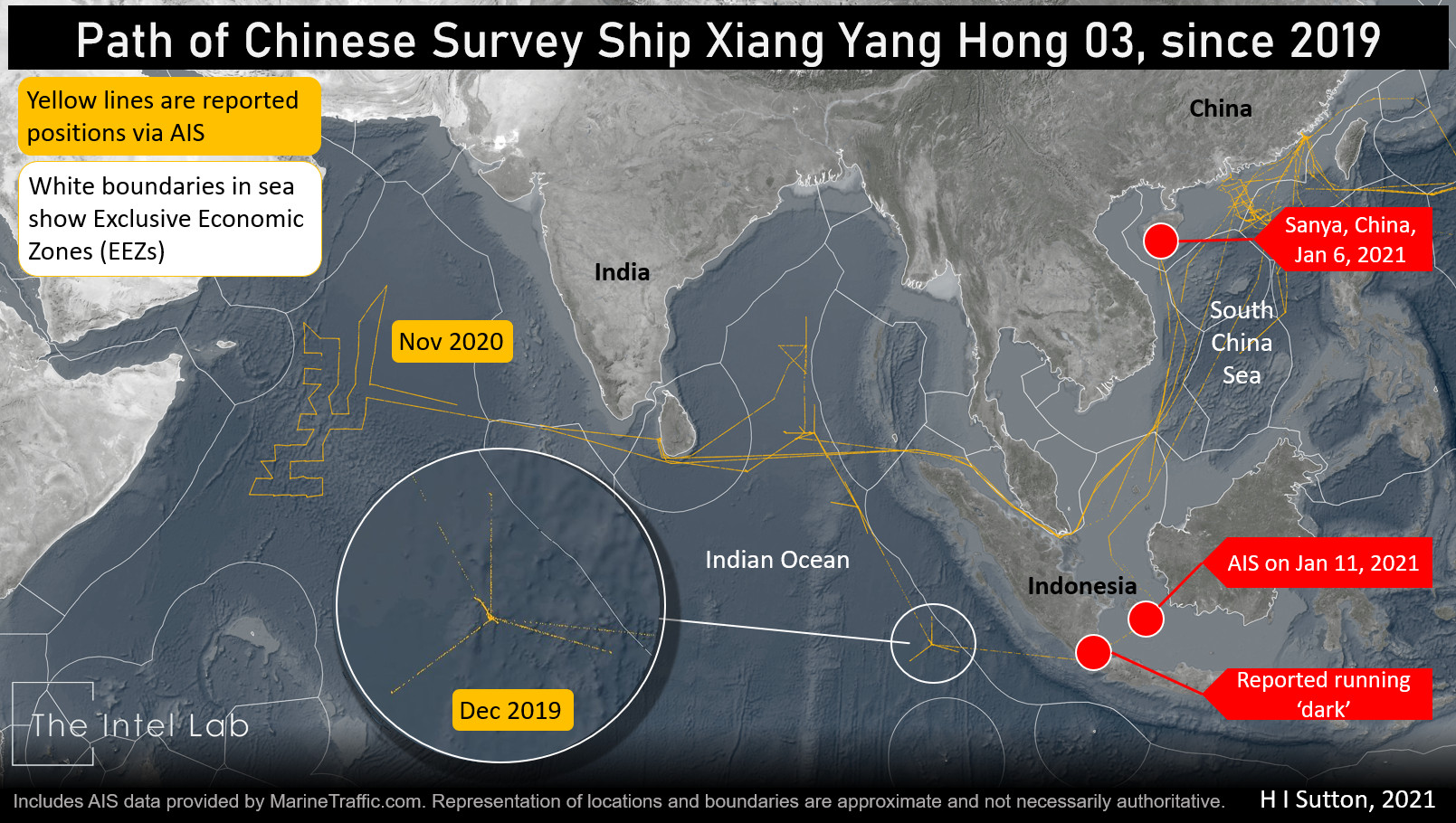 The survey ship, Xiang Yang Hong 03, left its base at Sanya on Hainan Island, China, on the morning of Jan. 6. It was intercepted by the Indonesian Coast Guard near the Sunda Strait during the week of January 11. All ships transiting the strategically important strait are required to be on AIS and when confronted the crew Xiang Yang Hong 03claimed that its AIS was damaged, according to press reports.

“Indonesia requires all ships transiting the world’s only archipelagic sea lanes to have functioning AIS and forbids them from carrying out oceanographic research,” according to Asia Times.
“The Maritime Security Agency said the Xiang Yang Hong 03 killed its transponder twice while passing through the Natuna islands at the southern end of the South China Sea and later in the Karimata Strait, northeast of the island of Belitung.”

The interception comes after a Chinese made Sea Wing UUV was discovered in Indonesian waters in late December. It was the latest of at least four Sea Wing gilder UUVs discovered in the region. Gilders are commonly used to gather data about currents, acoustics and the maritime environment. They use forward momentum created by repeatedly sinking and then rising in a method called variable-buoyancy propulsion. Many countries operate underwater gliders. The main U.S. equivalent is the Slocum G3, which the US.. Navy has deployed as the LBS-G (Littoral Battlespace Sensing-Glider). 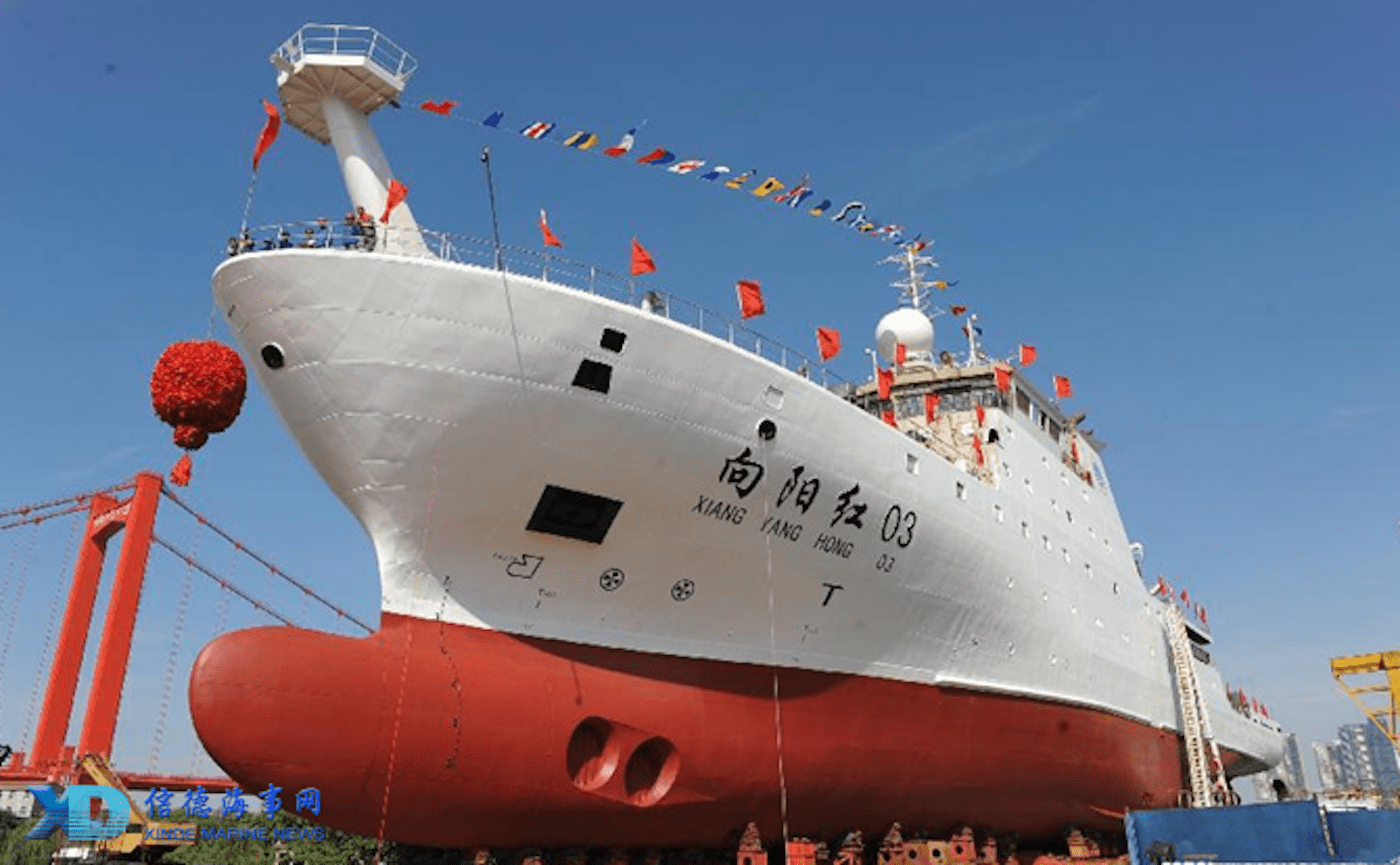 The data gathered by gliders can be used for legitimate scientific research. But it can also be used for naval intelligence including for planning submarine operations. The same is true of the data gathered by the ships own sensors such as side-scan sonar and remote operated vehicles (ROVs). The survey ships are often used to gather naval intelligence depending on where and what data they gather.

The discovery has led some to think China is gathering intelligence in Indonesian waters. This could relate to Chinese Navy (PLAN) submarine operations. The Sunda Strait, together with the Lombok Strait and Malacca Strait, are strategic choke points between the South china Sea and the Indian Ocean. All involve transiting Indonesian waters. If the PLAN is to operate more in the Indian ocean it will need to consider the safest routes through these areas that would require an extensive survey operation.

Xiang Yang Hong 03 is a regular visitor through Indonesian and the Indian Ocean Analysis by The Intel Lab, using AIS data provided by MarineTraffic.com, shows several voyages to the Indian Ocean in the past two years.

In November 2019 the passed through the Sunda Strait into the Indian Ocean, where she surveyed the deep waters to the west of Indonesia, and up into the Bay of Bengal. This area is considered important to the submarine operations of both India and Australia. Then a year later in November 2020 she was in the Indian ocean again, carrying out an extensive survey in the Arabian Sea.

Whether Xiang Yang Hong 03’s activities are directly related to submarine activity, other naval intelligence, or legitimate scientific research is difficult to prove but are raising question about Chinese intentions in the region.

“These discoveries in Indonesian waters suggest we should be paying a lot more attention to what the Chinese are doing and why,” Australian Strategic Policy Institute (ASPI) analyst Malcom Davis told Asia Times.