The Government Accountability Office released a new report that warns Columbia-class ballistic-missile submarine cost and schedule plans are at risk due to problems with a new digital design tool and cascading effects stemming from the design challenges.

The Navy has long said that the lead ship needed to be completed on time so that it could conduct its first nuclear deterrent patrol in early Fiscal Year 2031. There’s little schedule margin left in the program at this point, and GAO points to a cascading effect of design delays, which led to delays in ordering and receiving materials, which led to the yard being behind on advance construction activities, which put them behind when full construction formally started in October. The delays all have cost implications, the report adds, meaning the funding Congress approved to build the first two boats might not be enough to cover the actual cost. 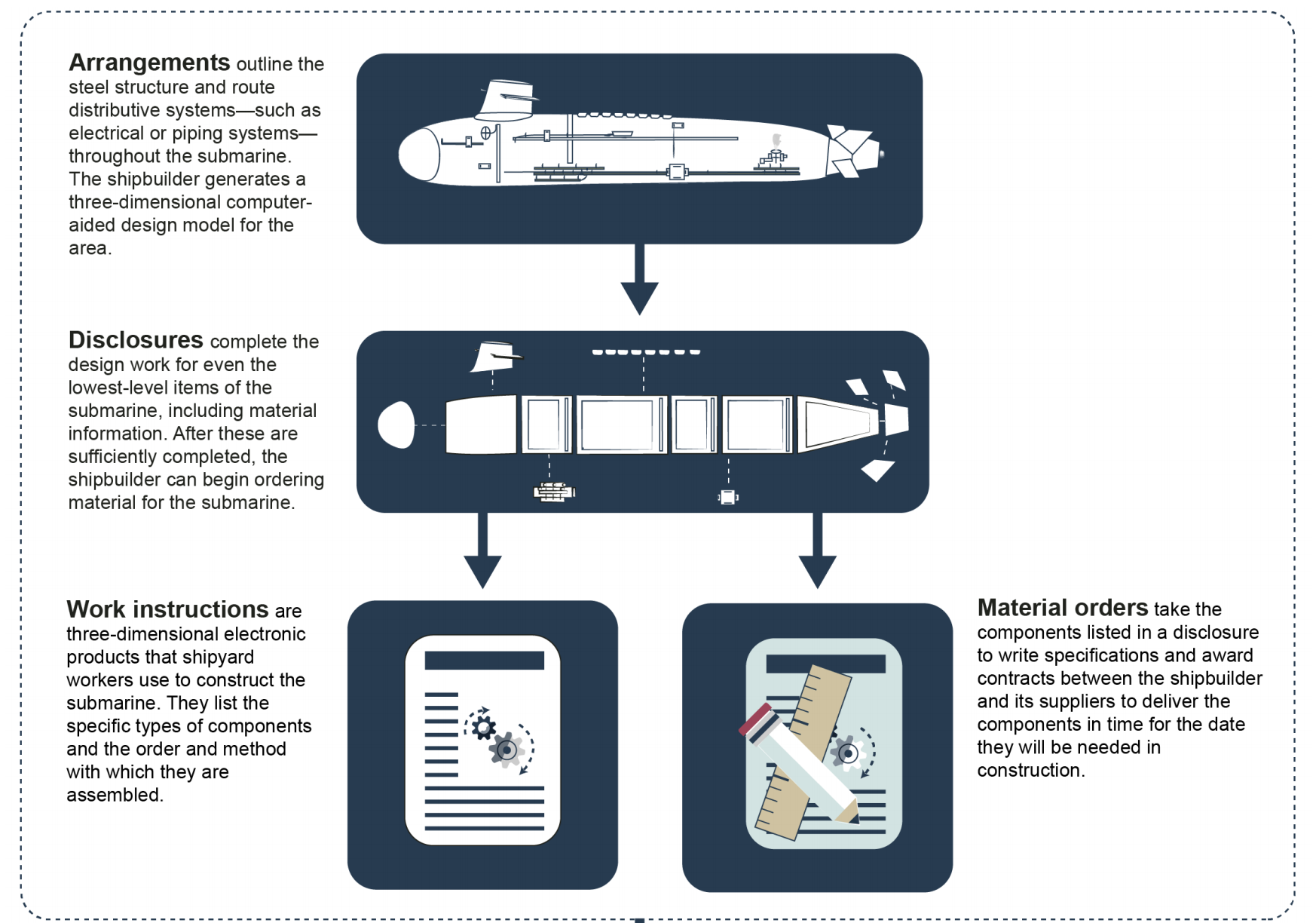 “Electric Boat has generally not met its planned design schedule for the lead submarine due, in large part, to persistent inefficiencies associated with its new software-based design tool. The tool integrates new capabilities, such as some enhancements to material ordering and cable routing. The tool was also expected to reduce the average hours needed to complete design disclosures by almost half of the time required for the Virginia class program. The program and shipbuilder expected these capabilities to enable greater efficiencies than previously possible,” the report reads.
“However, problems with the tool’s software prevented the program from fully realizing these efficiencies. Consequently, Electric Boat is behind schedule in producing key design products—design disclosures and work instructions—and as a result is experiencing delays in ordering materials needed to support the construction schedule. These delays, in turn, led to cost increases as the shipbuilder requires additional work hours to complete design products.”

“We reported in April 2019 that Electric Boat was not completing design disclosures—which establish the dimensions and components of materials needed—at the rate necessary to meet its plans to complete 83 percent by the start of lead submarine construction in October 2020. We also reported that the program needs to complete 83 percent of its design disclosures to achieve the savings assumed in its estimate of program cost,” the report continues.
“Electric Boat remains behind schedule on completing design disclosures and will have to improve performance in the coming months to meet the program’s goal. Data provided by Electric Boat shows that it missed its monthly disclosure completion goals in all but one month in 2019. As shown in figure 3, Electric Boat is not on track to meet its disclosure completion goal without increasing the average number of disclosures completed per month by at least 32 percent.”

The GAO collected its data from May 2019 through November 2020. However, a chart showing progress on completing the design disclosures only runs through early 2020.

Electric Boat spokeswoman Liz Power told USNI News today that the company had made good progress since the GAO did its research.

“This information is based on a snapshot of our progress more than a year ago. While we faced early challenges with our design tool, those have been resolved over the past year. We achieved our plan for design completion as well as the on-schedule October 2020 construction start on the Columbia class. In fact, at construction start, we were at a level of design maturity higher than any previous submarine program. Our progress in design products has allowed us to aggressively procure materials needed to support the construction schedule,” she said.

“Electric Boat recognizes that the Columbia program is critical to national defense and we continue to work with the Navy and our suppliers to meet the tight timelines required to deliver high-quality SSBNs to the fleet. With the support of Congress, we have made significant investments in our supply base to sustain output levels required to concurrently build the Virginia and Columbia classes,” Power added. 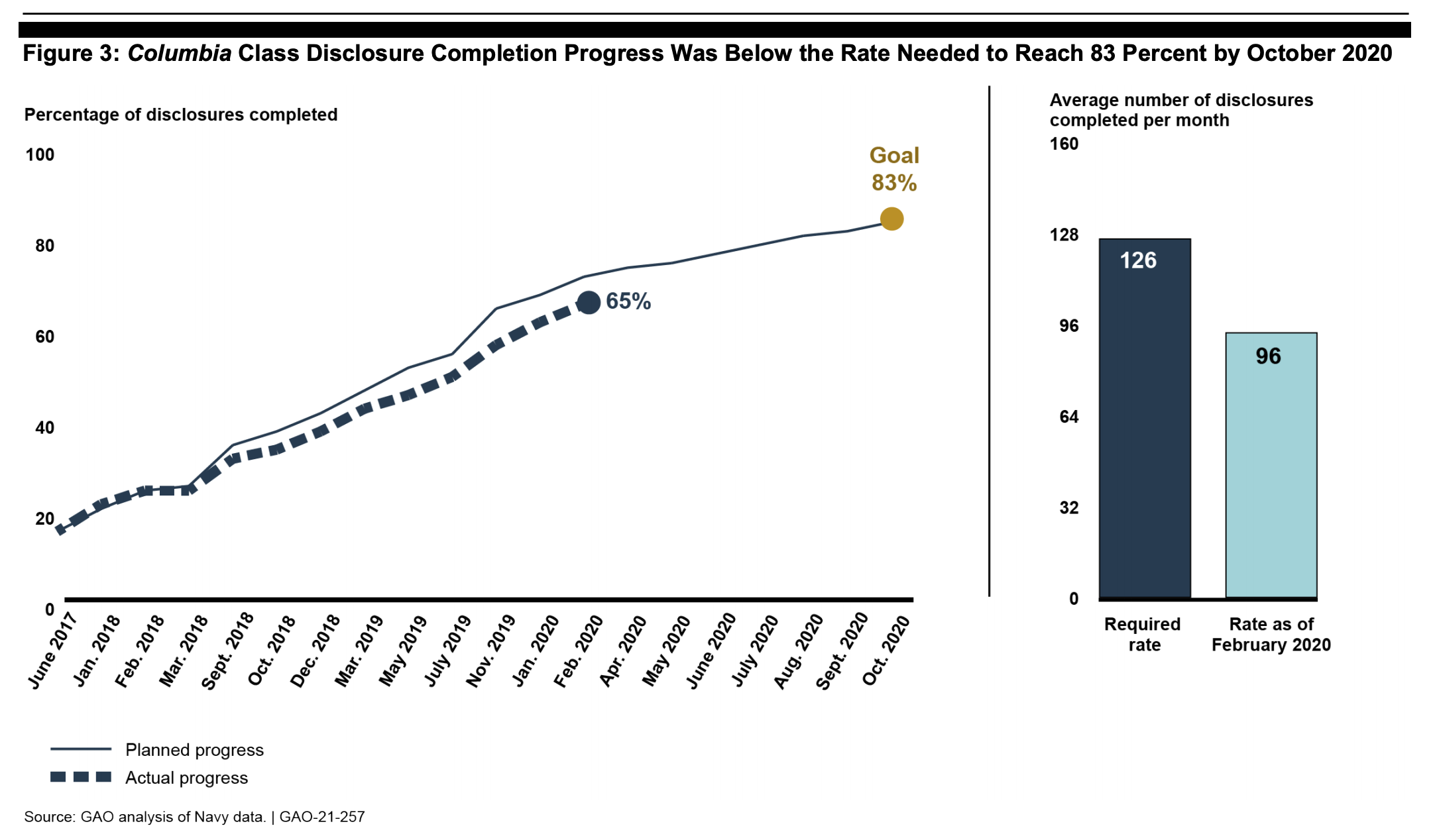 The GAO could not release an updated version of its chart due to security sensitivities.

As of last spring, “Program officials told us they expect the rate of disclosure completion to increase throughout 2020 since they completed early design products and have additional staff to focus on disclosures. In an effort to accelerate the completion of design products, Electric Boat added 313 more designers to its disclosure completion effort than planned in 2019, and consequently increased the cost to the government per disclosure. However, even with these efforts it has yet to recover the design schedule,” the report reads. It adds that the design team is doing additional work so that materials can be ordered even before the design disclosures are complete, but that adds to the team’s workload and again increases cost.

Beyond schedule implications, the report addresses budget implications as well. It notes that the Navy’s request to Congress for lead ship construction funding was already overly optimistic, as part of a strategy to set up a competitive negotiating posture with Electric Boat. That budget estimate also didn’t take into account an independent cost estimate from the Office of the Secretary of Defense’s Office of Cost Assessment and Program Evaluation (CAPE). Moreover, the report says, it didn’t include “changes to the program’s cost estimate assumptions. For example, the program’s prior cost estimate used to inform the budget request reflects an assumption that it will achieve cost savings by completing 83 percent of disclosures by the start of lead submarine construction. The program estimated that doing so would avoid the cost growth experienced by other recent shipbuilding programs by avoiding re-work resulting from design changes after construction had started. However, as discussed above, the program is not on track to meet that goal and, as a result, it is unlikely to realize the cost savings it planned.”

Naval Sea Systems Command could provide USNI News a comment on the report as of this posting.

An appendix at the end of the report includes a Department of Defense response, which is partially redacted. GAO notes that this report is the public version of one released in November which contains sensitive information taken out of this version of the document.

“The program successfully achieved its Office of the Secretary of Defense assigned exit criteria of 83 percent design maturity in May of 2020. The Senior Technical Authority and the Chief Systems Engineer for Submarines validated that the Critical Design Review has been completed, and certified that all areas of the shipbuilder’s designs were mature and supported development of production information, that the ship design was stable, and that a configuration control baseline had been maintained,” reads the DoD response.

“The Navy notes that this unprecedented level of readiness for construction is in spite of the fact that there have been problems with the development and implementation of the next generation design tool,” it adds.

Following the appendix, GAO adds that “We agree, as DOD notes in paragraph 2 p. 1 of its letter, that a high level of design maturity is essential for preventing the cost and schedule delays that have impacted other shipbuilding programs. As we have previously reported in 2017 and 2019, the Columbia class program aimed to achieve a high level of design completion prior to the start of construction. DOD states in its letter that the program has met its overall goal for design maturity. However, as we explain in the report, the program does not expect to achieve its specific goal for the completion of design disclosures by the start of construction that was established in 2016 as a prerequisite for achieving overarching cost goals. As a result, program officials told us that the program will not achieve the cost savings that they initially projected if they had reached their original design disclosure completion goal.”