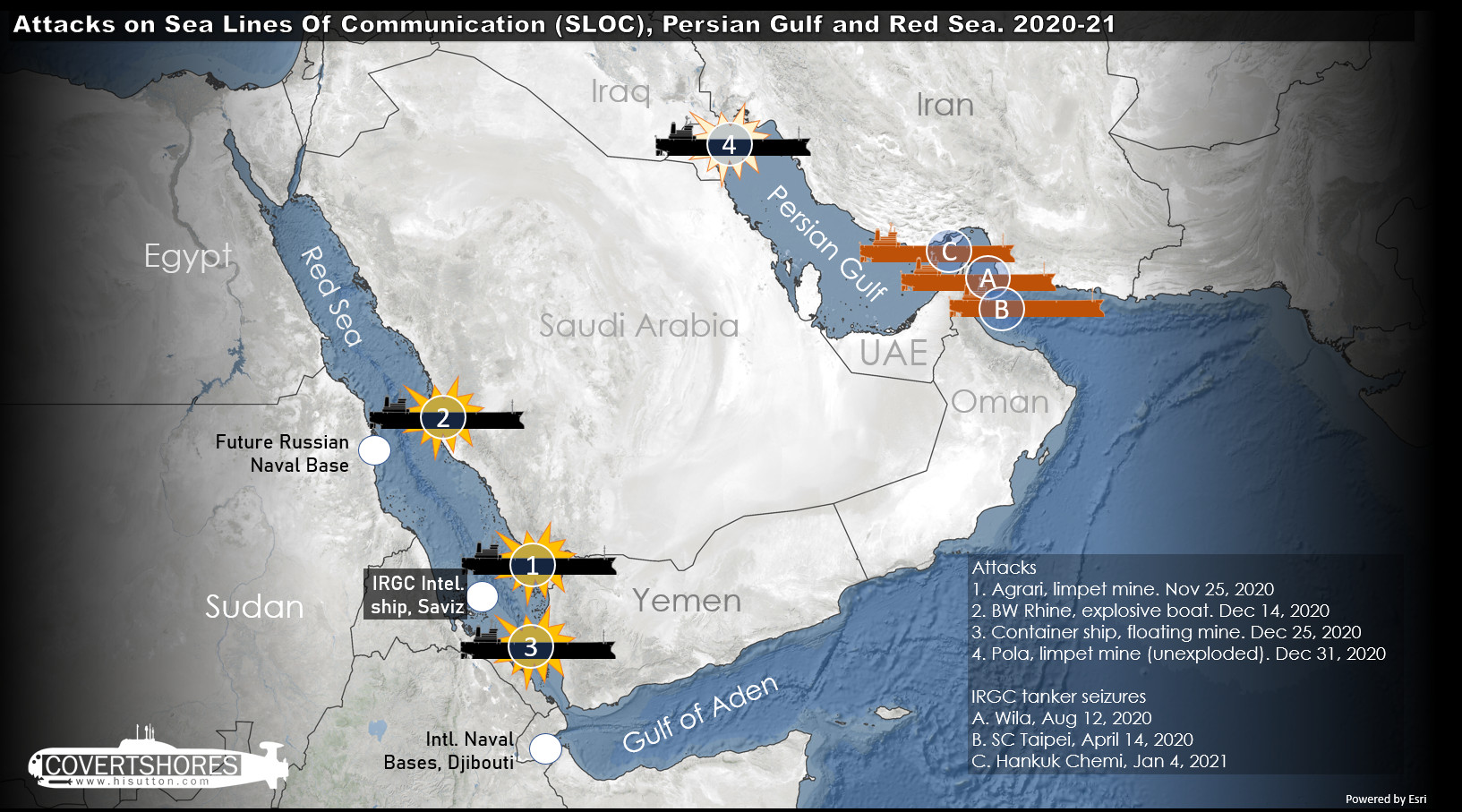 The Middle East remains a volatile area for merchant shipping into the new year, according to the analysis of attacks on ships in the region.

Iran’s armed seizure of a South Korean tanker, the Hankuk Chemi, on Jan. 4 adds to the list of incidents where civilian ships have been targeted in the Middle East. Iranian forces boarded the vessel in the Strait of Hormuz as it was leaving the Persian Gulf, which comes less than a week after another tanker, Pola, was attacked with a limpet mine on Dec. 31. That mine, which closely matches an Iranian model, was found off the Al Basrah Oil Terminal in Iraq at the other end of the Gulf, according to a report in The Maritime Executive. These are two incidents among many, and not just in the Persian Gulf.

Tankers and other civilian ships face real risks of limpet mine attacks, explosive boats and sea mines in the busy shipping lanes of the Middle East. These hazards add to a background threat of piracy and the risk of politically motivated seizure, like what happened to the Hankuk Chemi. Most of these threats reportedly point to Iran, or groups backed or supplied by Iran, as evidenced by direct IRGCN involvement in a 2019 series of attacks in footage released by the U.S. Navy at the time.

World navies are responding to the increasingly complex maritime situation by deploying warships and submarines to the region. The U.S. Navy has very publicly deployed Ohio-class guided-missile submarine USS Georgia (SSGN-729) to the Gulf. Meanwhile, aircraft carrier USS Nimitz (CVN-68) will now extend its deployment in the Middle East. Israel has also moved a Dolphin-II-class submarine to the Red Sea.

Attacks on tankers are not new but the threat has evolved in the past few years. There were several high-profile incidents in 2019, including the seizure of British tanker Stena Impero, and several limpet mine attacks on tankers. Last year was a quieter one in the Gulf but the threat remained, and attacks took place in the Red Sea.

The latest Red Sea tanker attack happened to a cargo vessel in the Southern Red Sea on Dec. 25. The vessel reportedly hit a sea mine, by local press reports. The vessel’s name was not reported in open sources. Circumstantially the mine was likely sown by the Yemen-based Houthi movement, which is supported and supplied by Iran.

Earlier that month, Singaporean-flagged tanker BW Rhine, was struck by an explosive boat at the Saudi port of Jeddah on Dec. 14. The attackers reportedly used a speedboat loaded with explosives. This type of attack, generally involving remote-controlled drone boats, is an emerging threat in the region. The culprits are believed to be the Houthi movement, according to a report in The Wall Street Journal that cites European officials. The attackers used technology that has been linked back to Iran.

On Nov. 25, another tanker, Agrari, was attacked at Shuqaiq in Saudi Arabia. The Houthis are also suspects in this incident. The attackers appear to have used a limpet mine. The Houthi movement is capable of developing its own mines, but is also known to use the Iranian model of a limpet mine that is similar to the one used on Pola in the Dec. 31 incident.

While Iran may not have had a direct hand in the Houthi movement’s attacks, much of the weapons and technology involved is believed to originate in Iran. Iranian intelligence ship Saviz is permanently anchored in the Southern Red Sea. This acts as a forward base, increasing the Iranian regime’s footprint in the region.

For its part, Iranian tankers now appear to be escorted by the Russian navy when delivering oil to the Assad regime in Syria. These tankers now take the Suez route with the Russian ships, based in Tartus, meeting them in the Mediterranean. Russia is now establishing a naval base in Sudan, increasing its presence south of the Suez Canal.

The international naval presence in the region could reduce some of these threats, but it is difficult to predict the next incident.