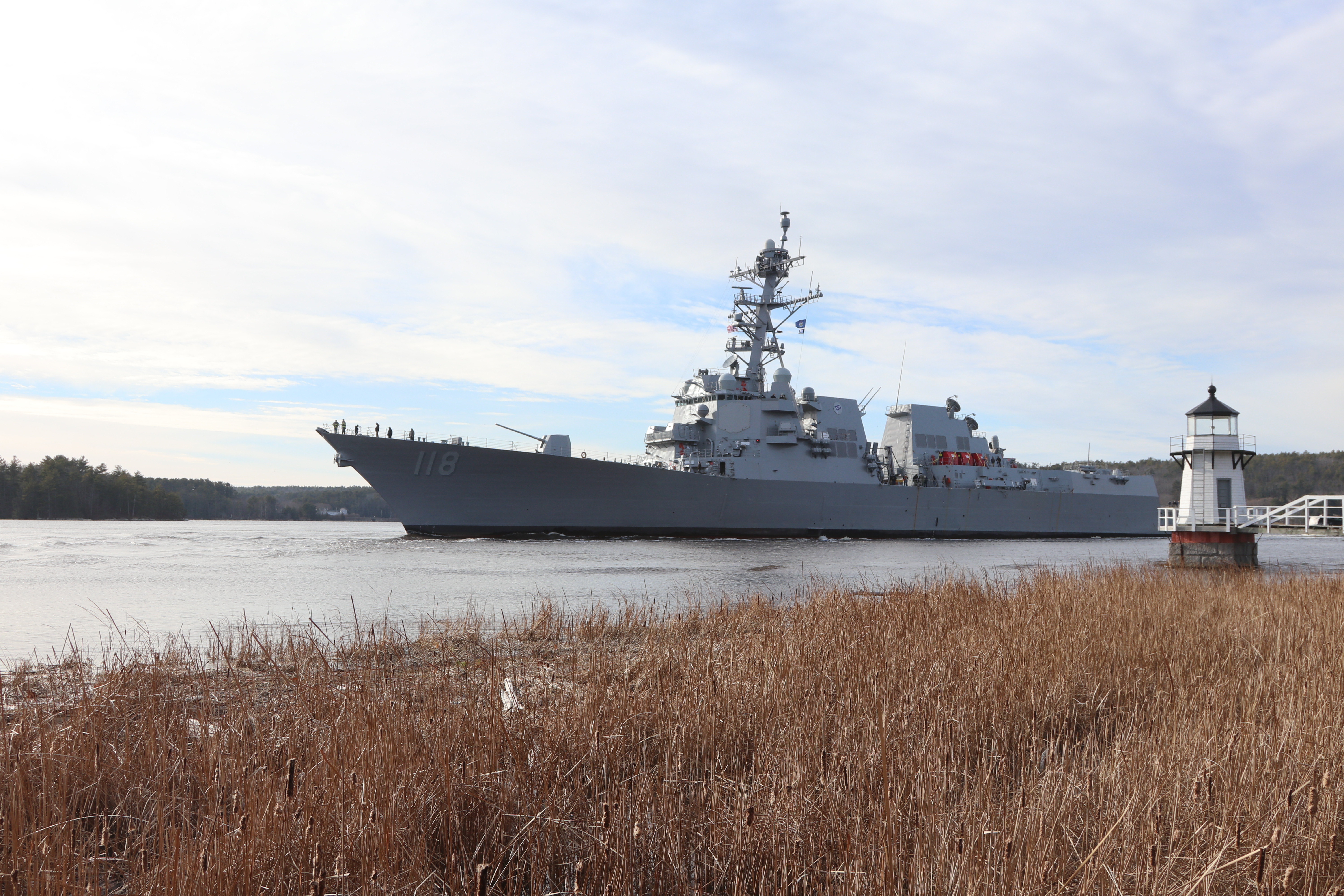 Builder’s trials are the first chance for BIW and the Navy to see the ship operating underway and to ensure all the hull, mechanical and electrical systems are working properly. A crew composed of shipyard workers is sailing Inouye now, and the assigned Navy crew will soon take over the ship for training and acceptance trials in the coming months.

“Sea trials for DDG-118 carried the additional requirement of utmost importance: to protect all riders against transmission of COVID-19 while on board. This challenge was met with an extensive plan and protocols that mirror the robust safety measures taken in the shipyard every day to keep our employees safe,” reads a statement from General Dynamics Bath Iron Works.

The last ship BIW sent out for trials was USS Thomas Hudner (DDG-116), which conducted builder’s trials in March 2018 and acceptance trials in May.

Daniel Inouye’s schedule has slipped repeatedly – a 2018 article from the Honolulu Star-Advertiser noted construction on the ship began in 2014 and that the DDG was supposed to deliver to its Pearl Harbor homeport in 2018, which was pushed to 2020 due to schedule changes at BIW. That 2020 homeport arrival now appears set for 2021, as the ship will have to go through acceptance trials and delivery to the Navy before it can sail from Maine around to Hawaii. 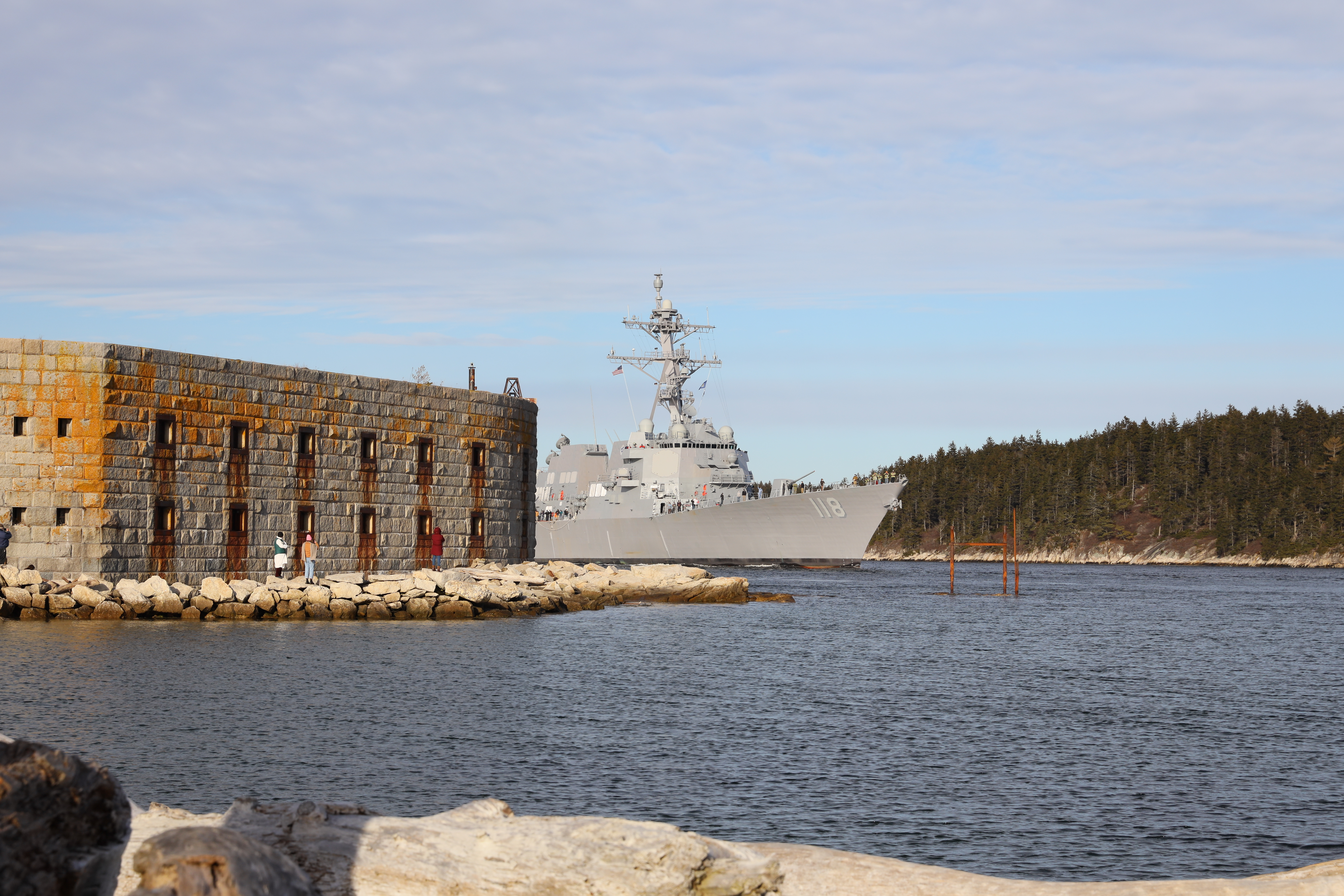 Since deciding to restart Arleigh Burke construction in 2008, the Navy’s plan had been to award contracts for two hulls a year across two builders: BIW and Ingalls Shipbuilding. In the current multiyear contract, the service has been trying to lobby Congress for money for a third ship a year, which it successfully got in Fiscal Years 2019 and 2020. Though the contracts had been awarded evenly in the previous few years, in Fiscal Year 2018 the Navy awarded two ships to Ingalls and zero ships to BIW, in acknowledgment of the yard’s great backlog and expected difficulty getting new ships delivered on time. In FY 2019 each yard was given one ship and BIW was later awarded the option for a third ship, to help make up for the previous year and keep a steady flow of work. But in FY 2020, the option for the third ship went to Ingalls, even though USNI News understands that BIW offered a better price on the ship – because the Navy cared more about a reliable delivery schedule than it did contract cost.

BIW President Dirk Lesko previously acknowledged the yard is about a year behind in its destroyer production – a combination of previous delays of about six months, plus the effects of this year’s pandemic and the months-long strike by union workers.

“DDG 118 is the first BIW ship to head down the Kennebec River in two years. It represents our future as a shipyard, not just because this ship is an important and much-needed asset for the U.S. Navy fleet, but also because it demonstrates the commitment by our workforce and company management to increase our shipbuilding rate to two ships per year, a crucial part of our Three Year Schedule Recovery Plan that is well underway,” reads the BIW statement.

BIW is trying to dig out of its backlog of work and return to a competitive shipbuilding rate within three years. The Navy’s current multiyear contract will end in FY 2022, and at that point BIW will likely be asked to compete with Ingalls again for another multiyear contract. The Navy had originally planned to end the Arleigh Burke line in 2022 and upgrade to a Large Surface Combatant, but that LSC program has been pushed back repeatedly, and a “DDG Next” large combatant program is now slated to start construction in 2028 – leaving a five-year gap that will almost certainly be filled with another multiyear contract for Arleigh Burkes. If BIW runs into problems implementing its recovery plan, it would have a harder time going into that competition with a strong bid.