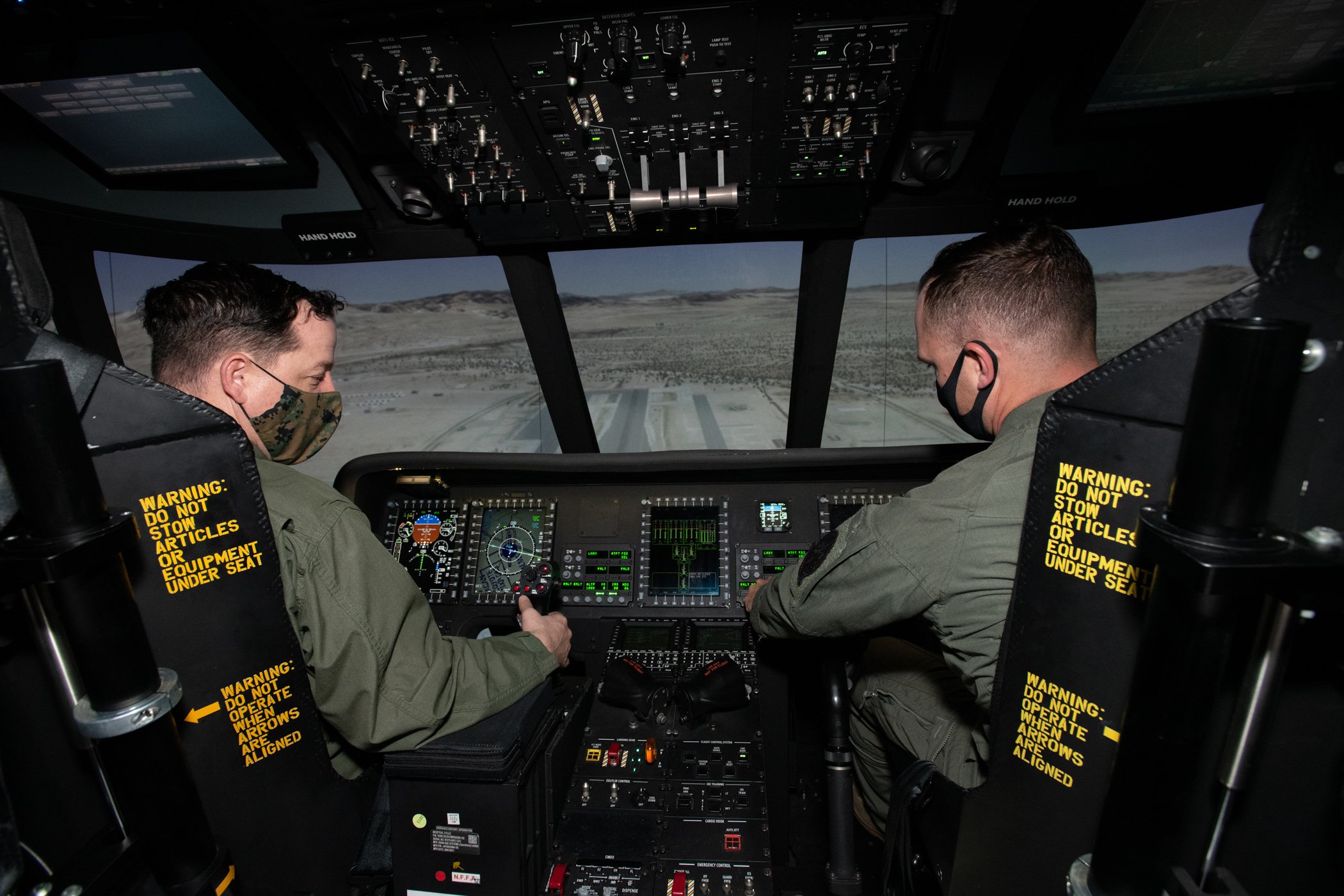 The final of three CH-53K heavy-lift helicopter trainers has been declared “ready for training,” and an industry/government team next month will begin training the squadron that will conduct the new helo’s initial operational test and evaluation.

The Composite Maintenance Trainer (CMT) just recently reached RFT, Lockheed Martin’s Sikorsky announced today. The CMT is “a full-scale mock-up of the aircraft and is the final step of familiarizing the maintainer with the aircraft. The device allows students to interact with the physical controls of the aircraft to learn to remove and install hardware and perform functional checks,” according to Sikorsky.

This follows two other systems being declared ready for training: the Helicopter Emulation Maintenance Trainer (HEMT), which is a computer-based lab that familiarizes the mechanic with maintenance tasks they perform – including tools, functions and checks – in a classroom environment with stations for 16 students. The first trainer installed and declared ready, the Containerized Flight Training Device (CFTD), “is a portable full-mission flight simulator that will allow flight crews to train on the full scope of Marine Corps heavy lift missions, including external lift operations.”

“[Naval Air Systems Command] has certified that the devices are in such a state that the Marines can safely and accurately train on the training system to prepare them to operate and maintain the real aircraft,” Sean Cattanach, Sikorsky’s senior program manager of the U.S. Marine Corps CH-53K Training System, told USNI News in an interview this week.

“Now that the devices are ready for training, the Marines are free to use them now, obviously, but more significantly we’ll be conducting official training classes early next year,” he said, adding that Sikorsky instructors, alongside NAVAIR officials, will train the pilots, crew chiefs and maintainers from Marine Operational Test & Evaluation Squadron (VMX) 1, which will conduct IOT&E next year and bring the new helicopter closer to initial operational capability and its first operational deployment.

Cattanach said that, because of the digital design tools used on the CH-53K program, the trainer was developed alongside the aircraft itself, meaning both the flight trainer and the maintenance trainers are incredibly accurate to the real experience of working with the helicopter.

“One of the benefits of developing a training system concurrently with the aircraft is that we’re able to utilize the digital designs from the aircraft to make sure the training is accurate,” he said. As a former Army Blackhawk pilot, he said even small differences between the training environment and the actual platform can be very distracting, and the feedback from Marines who have gone through training and are now flying the helicopter for testing is that it’s “spot-on to what they’re seeing in the aircraft.”

On the Composite Maintenance Trainer helicopter mock-up, Cattanach said Sikorsky was able to find ways to keep the realism while also keeping costs down – due to the digital design, the company was able to build some components through additive manufacturing, so that the design was exactly the same as a real part but it was cheaper, though not airworthy like it would need to be for the real helicopters’ supplies.

“The training devices will ensure a flawless entry into service for the CH-53K heavy-lift helicopter,” Bill Falk, Sikorsky CH-53K program director, said in a company statement today. “We are proud to build this 21st-century helicopter giving mission flexibility to the U.S. Marine Corps.” 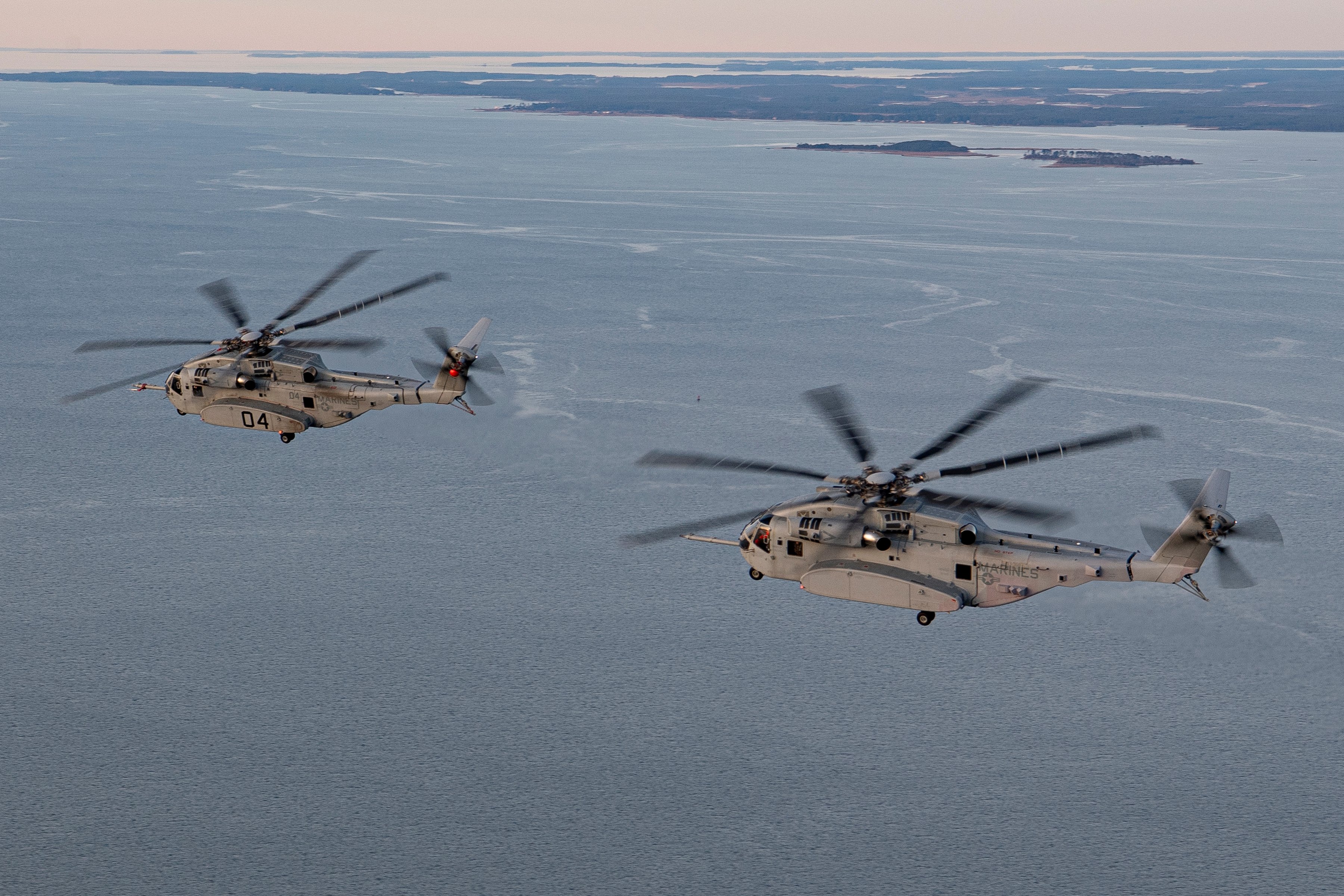 The three training devices are set up at Marine Corps Air Station New River, N.C. In January, Sikorsky will lead training for the pilots, crew chiefs and maintainers in VMX-1. Cattanach said Sikorsky will remain involved with the trainers even after the initial cadre of personnel are trained, but Sikorsky and NAVAIR are still working out the long-term sustainment plan. He said it’s also unclear at this time if MCAS New River will remain the only training site or if other trainers will be built and spread throughout the fleet.

The CH-53K IOT&E will take place in 2021 ahead of a planned first deployment in 2023 or 2024. The helicopter now has more than 2,100 flight hours of testing from the ground and from an amphibious ship, in various temperatures and environments, and carrying a range of internal and external payloads. As production ramps up in Sikorsky’s Connecticut assembly line, the program is heading towards the delivery of its first low-rate initial production (LRIP) aircraft in September 2021.