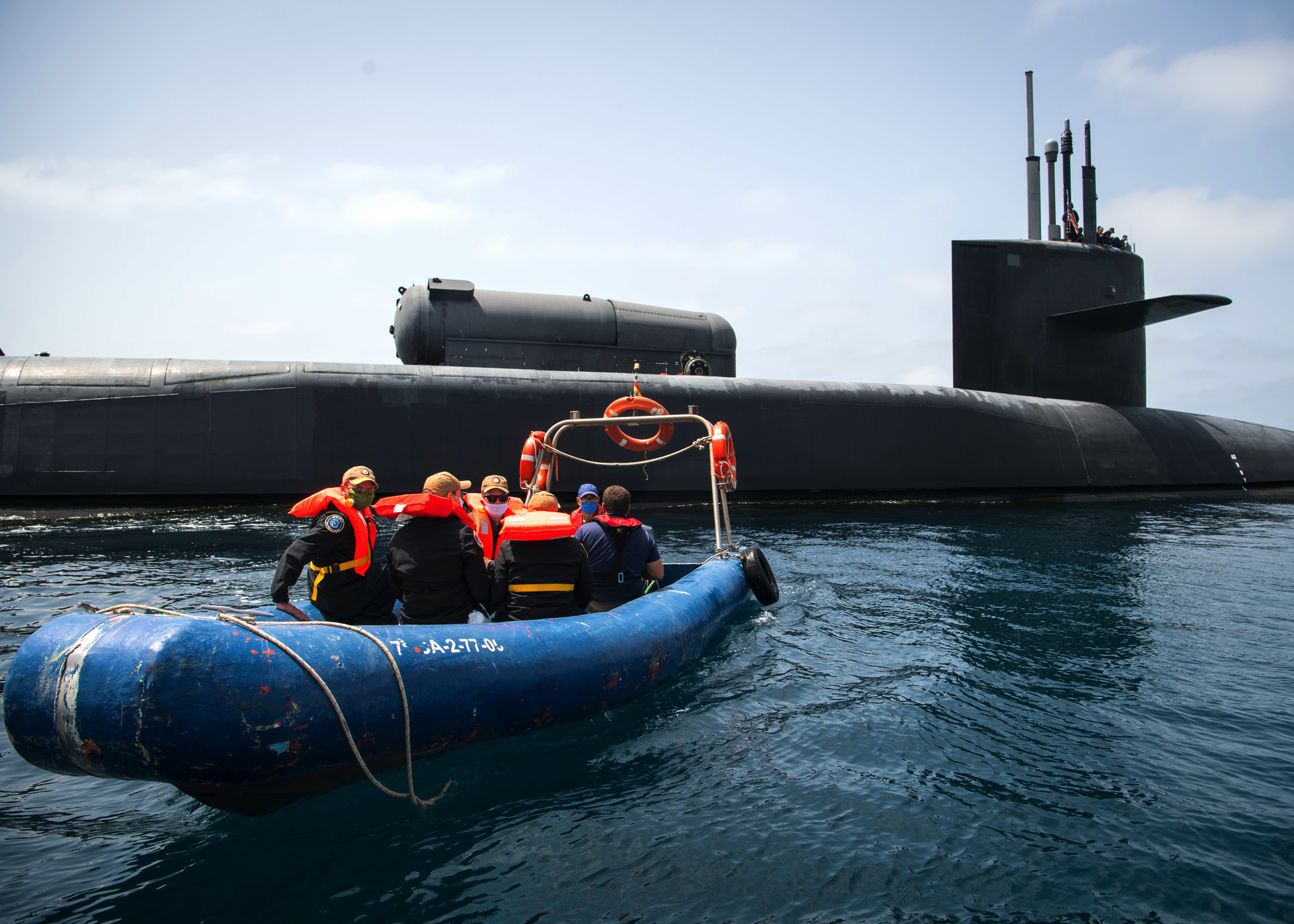 The Navy is on track to field a hypersonic strike weapon on submarines by 2025, the head of the Navy’s Strategic Systems Programs said today.

Vice Adm. Johnny Wolfe said the hypersonic weapon, which will be used as a conventional prompt strike (CPS) alternative to long-range nuclear weapons, “is very much a priority within the Navy.”

He said the challenge facing the Navy, as well as its Army, government and industry, is to “take all the successes we’ve had in the research and development of flight testing, and how do we start to productionize that, and how do we transition that into a military capability that we can give to the Army – because we’re kind of doing this collaboratively with the Army – for what they want to do for their first all-up round capability in about the 2023 timeframe, and then how do we continue to push that forward so that we get to a Navy capability on SSGN in the 2025 timeframe?”

The Navy had previously stated it hoped to field hypersonics on Ohio-class SSGNs by the mid-2020s and on Block V Virginia-class SSNs with the Virginia Payload Module by later in the decade, without giving a more exact timeline. Wolfe said today at the Naval Submarine League annual symposium that the SSGNs would see a “limited operating capability” of the hypersonic weapon by 2025 and that it would reach initial operational capability on the Virginias by 2028.

“That is a very rapid program, but we are having a lot of success,” Wolfe said during his remarks.

Earlier this year the Navy flew a second flight test of the hypersonic glide body, which the admiral called “extremely, extremely successful: met every single test requirement that we had, it exceeded every single one of those that we had laid in as what we could consider success criteria, and that really was the springboard for us to now start that transition out of our national team into industry for a capability that we can produce.”

Specifically, he told USNI News during a question and answer session, the challenge ahead is for the hypersonic glide body to transition from a government-led national team effort in a research and development environment into a production effort led by a contractor that is responsible for entering serial manufacturing.

“I really think it is just getting the industrial base capacity where it needs to be,” he said when asked what specific technical or industrial base challenges pose the biggest threat to the tight timeline ahead.
“I think we understand the technology: we’ve proven that in flight, we’ve proven that in the things we do. It really is transitioning to production, which we all know in any development program that anybody’s dealt with – the science is great, you go out and build one-offs, and then transitioning that to a very repeatable process so you get the reliability that you need, and that’s exactly where we’re at right now. Transition to production, get industry to step up to be able to reliably do that and get to the throughput that we need.”

This year the program also needs to finish development of the booster that the glide body will go on, which will also be common between the Army and the Navy. Once development wraps up, Wolfe said, the team will conduct static fires, flight tests from land-based facilities, and eventually flight tests from an SSGN.

“We are starting to really put meat on the bones of how we integrate this all-up round both within the Army tow and with the Navy’s SSGNs. So a lot of work going on in that area as well,” he said.
“A very compressed timeline, but what I would tell you is we have stayed on schedule, we have continued to push the teams, we continue to push industry, and it is all hands on deck, and we are having very very good success in everything that we’re doing in that program.”

A slide Wolfe showed during his remarks outline upcoming milestones for the conventional prompt strike program: in 2021, the program would need to begin initial unit training in the Army without the all-up round; the full prototype system would be delivered to the Army in 2023 to begin training and operations. Meanwhile, in 2022 the canister would conduct a hot launch operational demonstration, with a cold launch demonstration coming later in the year or in 2023.

By 2024, industry would be delivering all-up rounds, which the Navy could begin using to conduct limited SSGN operations in 2025.

Wolfe did not mention other types of ships in his remarks. National Security Advisor Robert O’Brien raised questions last month when he discussed this hypersonic system being installed not only on submarines but also on Zumwalt-class and Arleigh Burke-class destroyers.

“The Navy’s Conventional Prompt Strike program will provide hypersonic missile capability to hold targets at risk from longer ranges,” O’Brien said in a speech at the Portsmouth Naval Shipyard.
“This capability will be deployed first on our newer Virginia-class submarines and the Zumwalt-class destroyers. Eventually, all three flights of the Arleigh Burke-class destroyers will field this capability.”

USNI News reported at the time that the Navy will modify the Multiple All-up-round Canisters (MAC) system it developed for its four Ohio-class guided-missile submarines, which was originally designed to hold three large intermediate-range ballistic missiles but could be repurposed to contain three Common-Hypersonic Glide Bodies instead. Today, the MAC system holds seven Tomahawk Land Attack Missiles (TLAM), but USNI News reported that the three-shot MAC could be swapped in on the Ohio-class SSGNs and the Virginia Payload Modules.

However, putting the hypersonic weapons on a destroyer would be more complex.

For the Zumwalt destroyers, USNI News understands, the trio of ships could replace their dormant twin 155mm Advanced Gun System mounts in the bow of the ship with a reconfigured MAC tube to field the new weapon. Those guns are sitting unused after their corresponding rounds were deemed too expensive, though it’s not clear how much it would cost to remove them and add a vertical launch system capable of fielding the new hypersonic weapon system.

On the Burkes, which are already close to their maximum capacity in terms of accommodating new systems, fielding the hypersonic missile would likely mean ripping out some number of the Mk 41 vertical launchers built into the deck and replacing them with a launcher that can accommodate the much wider and much longer hypersonic glide body.