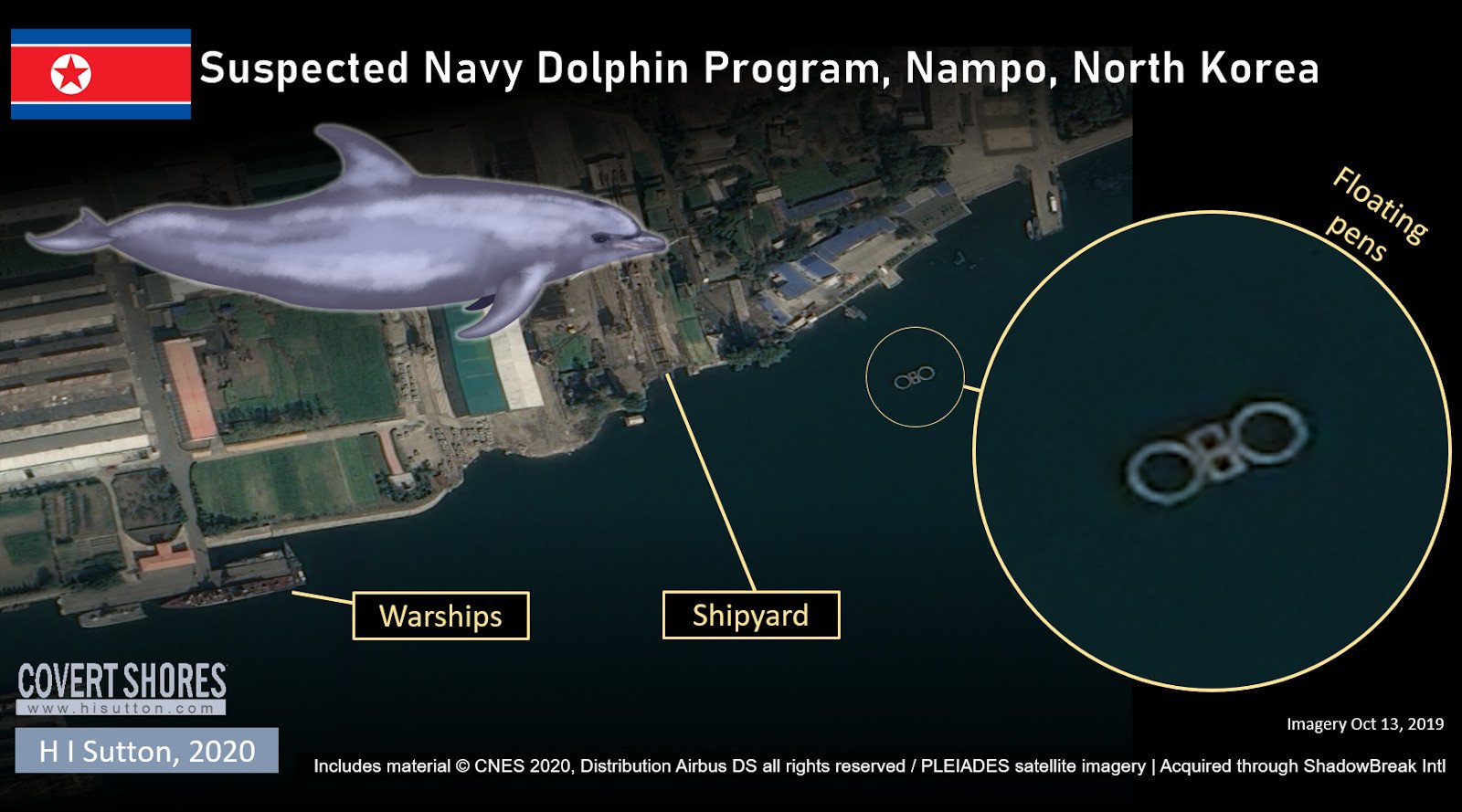 Evidence is emerging that the North Korean regime is training dolphins for military purposes, according to new satellite imagery.

While the U.S. Navy pioneered the training of dolphins and other marine mammals for naval purposes and has a program based in San Diego, it’s not a capability most navies can afford. To date, only the Russian Navy, with bases in the Arctic and Black Sea, has followed suit.

Based on image intelligence, North Korea’s program dates back at least to October 2015. Their first appearance was at the site of a major naval display in Nampo, a naval base and port city on the west coast. The program is likely part of the widespread modernization of the navy that has taken place under North Korean leader Kim Jong Un.

The animal pens were spotted in satellite imagery in the brown waters between a shipyard and a coal loading pier. This location may still be in use intermittently, possibly for training with the naval units based nearby. But the main activity moved to a site further up the river on the edge of town. This base, possibly where the dolphins are bred, began its development in October 2016.

The U.S. Navy and Russian Navy programs provide a good frame of reference. In America, dolphins and sea lions have been trained. Russia uses Beluga whales, dolphins and seals. The U.S. Navy has deployed them in Vietnam and the Persian Gulf. More recently, Russia may have deployed them to the war in Syria. The Beluga whale that turned up in Norway was likely part of the Russian Navy program. What it was doing off the Norwegian coast is open to discussion.

Comparisons to the marine mammal pens used by the U.S. Navy and Russian Navy suggest that the North Korean pens are sized for dolphins.

It’s also possible that the pens are some type of fish farm. North Korea has placed increased emphasis on fish farming in recent years and they are cropping up all over the country. Many are run by the armed forces. But a survey of fish farms suggests that these pens are different, and not consistent with other sites in North Korea

Marine mammals can be trained to locate or pick up objects on the sea floor, such as mines or expended training torpedoes. The same skills can be used to inspect objects on the seabed, like cables and sonar arrays. If these are friendly, then it is useful for maintenance. 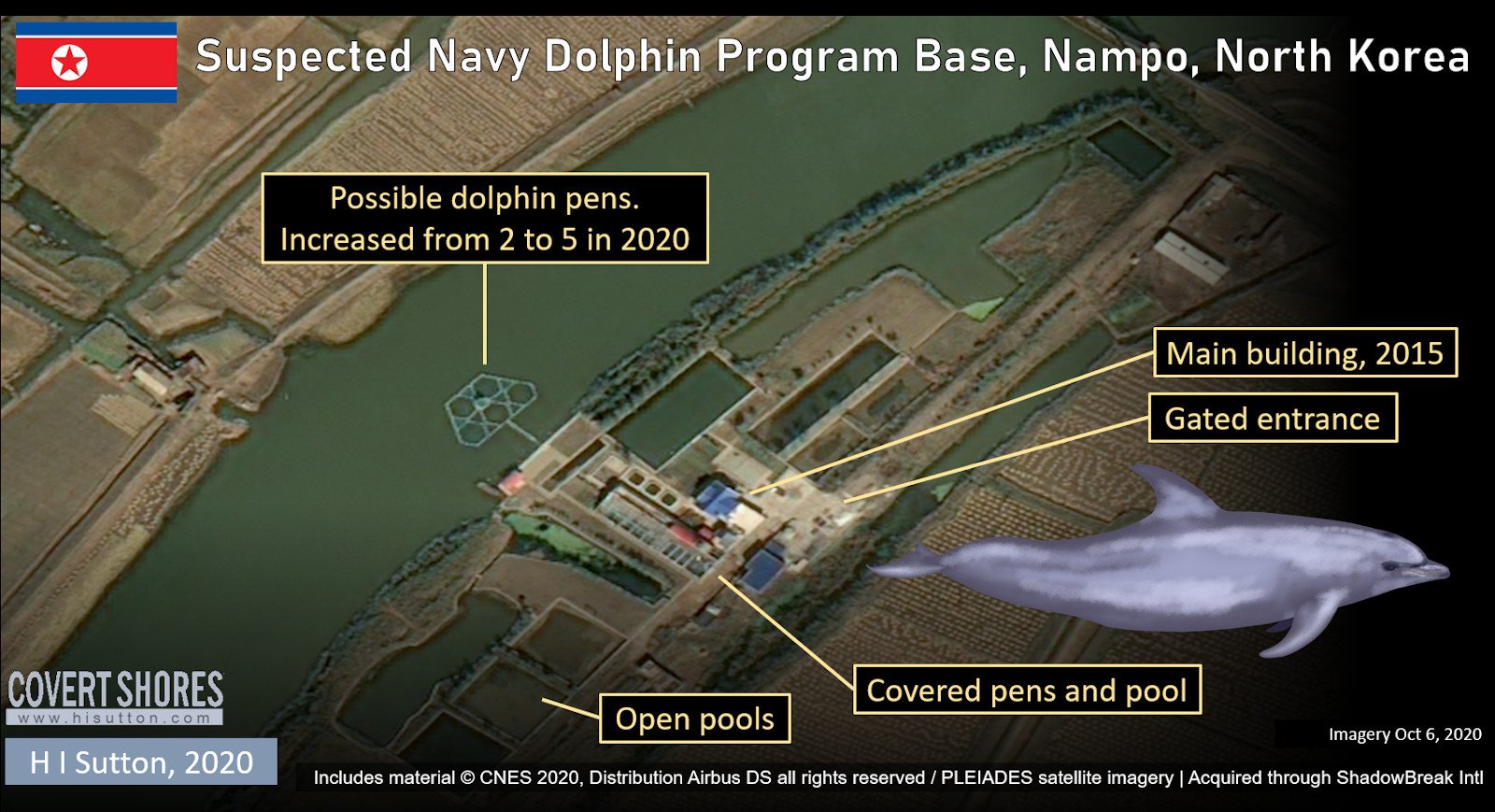 Marine mammals can also be used to defend naval bases against saboteurs. They can also be trained to detect enemy divers and mark them for investigation and neutralization. Human swimmers cannot compete with dolphins or seals in speed, agility, and the natural ability to ‘see’ in dark or murky water. It’s not a contest, but because they cannot identify whether the diver is a friend or foe, they would only be used to mark the target by attaching a buoy. This is also more practical for training purposes. Enemy divers can then be dealt with by grenades or nets with shark hooks.

North Korea also trains dolphins for a dolphinarium in the capital, Pyongyang. Given the intertwined nature of its military and civilian apparatus, it is not farfetched to suggest that the naval program benefits from this experience and infrastructure.