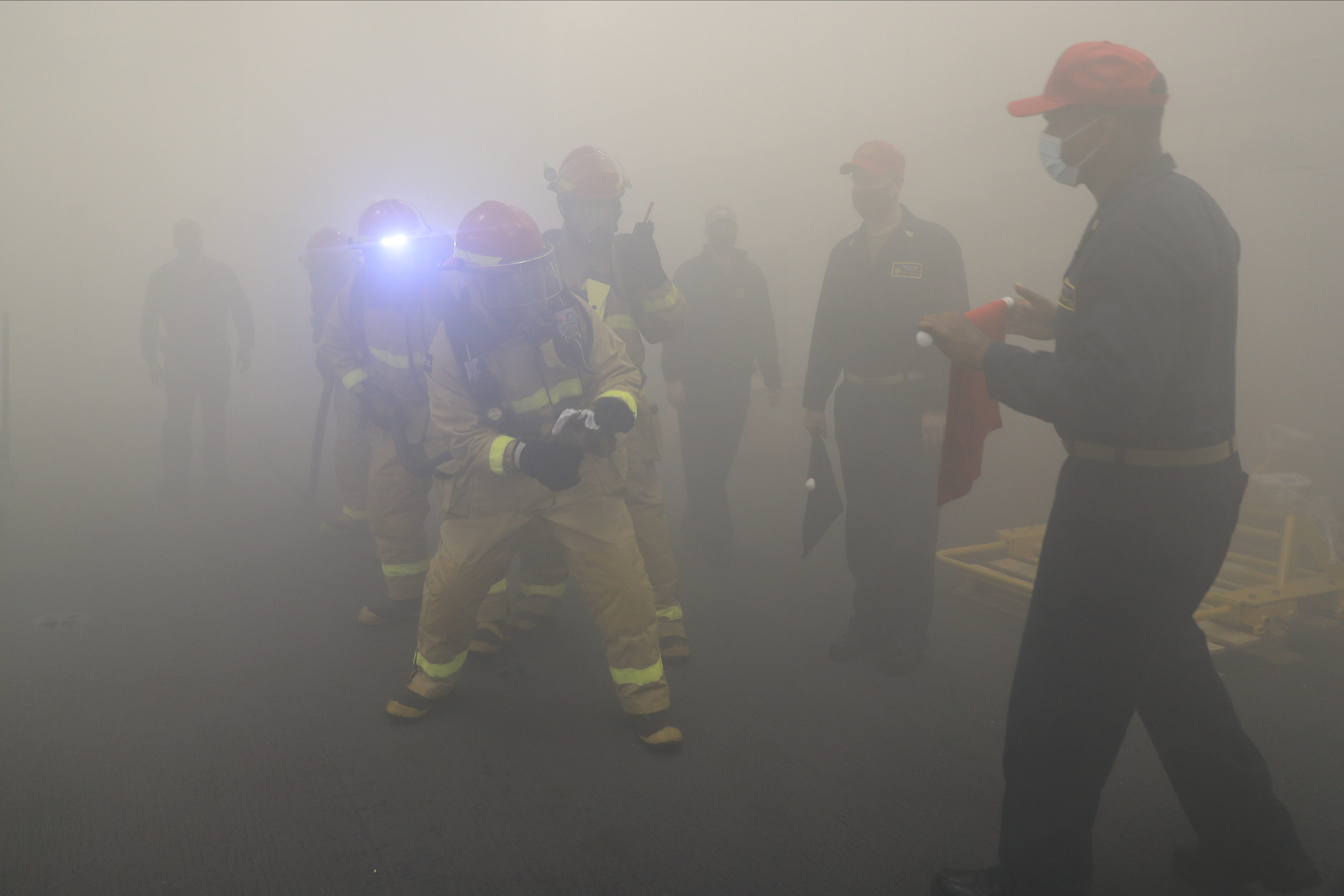 Sailors assigned to USS John C. Stennis (CVN 74) and USS Gerald R. Ford (CVN 78) respond to a simulated casualty aboard Ford, Oct. 26, 2020. This integrated fire drill was a combined effort across Ford, Stennis and Naval Station Norfolk Federal firefighters to increase proficiency of all units in the event of an actual casualty. US Navy photo.

When USS Bonhomme Richard (LHD-6) caught fire at the pier over the summer, sailors from across the waterfront rushed to the scene, some in damage control teams from their own ships and some showing up as individuals who wanted to help.

Though the five-day firefighting effort became very organized, the first minutes were confusing: it was a Sunday morning, when most of the Bonhomme Richard crew and leadership weren’t around, and disparate people who knew how to fight fires but hadn’t trained on how to fold in together in an organized way rushed to the scene.

A recent training exercise at the pier at Naval Station Norfolk sought to address that challenge.

“This has been a big joint effort,” Lt. Cmdr. Brandon Summers, the damage control assistant on John C. Stennis, said in a Navy news release.
“The training required coordination between not only us, but the USS Gerald R. Ford and the base fire department. It’s basically what we call ‘game time,’ it’s a chance for the [sailors] to show what they worked and trained so hard for.”

He added that the drill helped boost the proficiency of fighting a fire on an aircraft carrier but also in “fine-tuning procedures for requesting and integrating assistance from outside the skin of the ship.” 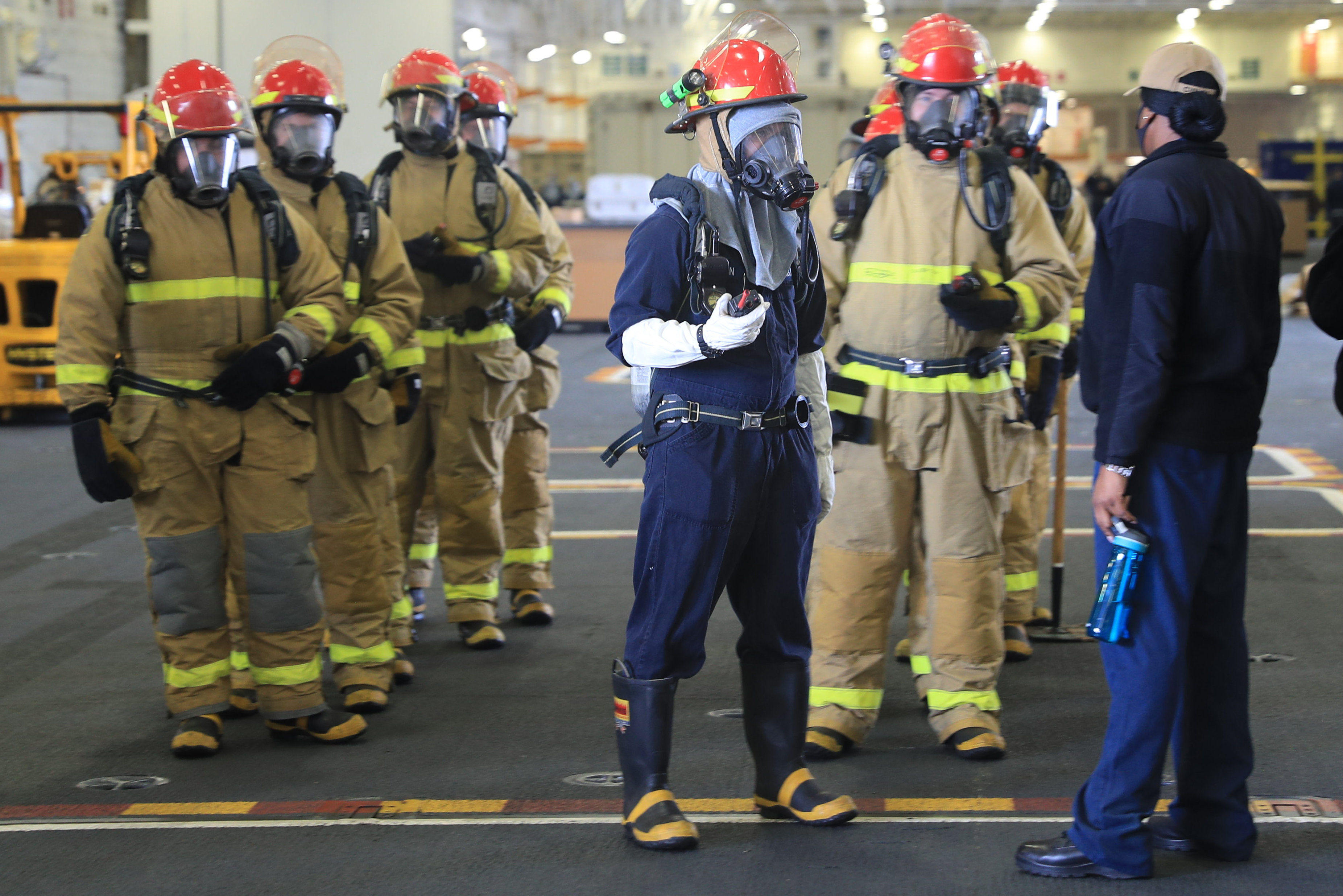 Sailors assigned to USS John C. Stennis (CVN 74) respond to a simulated casualty aboard USS Gerald R. Ford (CVN 78), Oct. 26, 2020. This integrated fire drill was a combined effort across Ford, Stennis and Naval Station Norfolk Federal firefighters to increase proficiency of all units in the event of an actual casualty. US Navy photo.

In the Bonhomme Richard firefight, Navy spokeswoman Lt. Cmdr. Nicole Schwegman told USNI News during a September visit to the amphibious ship at the pier, “you just saw people running to the ship from all ships. It was a Sunday, so they’re coming in maybe to do some paperwork,” but when the fire broke out, nearby sailors were “just dropping what they were doing. I think some guy ran in in his cowboy boots because they were ready to drop and fight.”

“I don’t think there was a ship on the waterfront that didn’t send sailors and fire teams out to help, and I think that just shows – this fire was a tragedy, but it proved that we train our sailors superbly. And the reason we saved this ship was because of their training and what they were able to do,” she continued.

At least 13 different ships in San Diego contributed to the Bonhomme Richard firefight, according to the news release on the Stennis and Ford drill. In addition to those sailors, according to Rear Adm. Philip Sobeck, the commanding officer of Expeditionary Strike Group 3 who oversees amphibious ships in San Diego, even more personnel helped send information on how the fire looked from their vantage point on their own ships, on small boats in the water and on helicopters in the air, providing ideas for how to get water onto hot spots or signaling to helos from the water. Sobeck called it an “incredible orchestration of just people coming together,” while speaking to USNI News at the pier in September.

With so many potential sources of help and information, “it’s key for our teams to learn how to interact with one another in the event of a major casualty,” Lt. Cmdr. Tabitha Edwards, Ford’s damage control assistant, said in the release.
“Practice makes perfect, and the more we train, the more we will know how to respond in the event of an actual casualty when providing or receiving assistance.”

Gerald R Ford (CVN 78) and John C Stennis (CVN 74) at Norfolk Naval Base’s Pier 11 on October 7, 2020. Ford is working with Carrier Air Wing Eight to prove out the ship’s aviation systems through a series of underway events. Stennis returned to Norfolk on Dec. 15, 2019, to prepare for an upcoming Refueling Complex Overhaul (RCOH). The ship conducted no operations during 2020 and a number of structures already have been erected on her flight deck for the overhaul to take place at Newport News Shipbuilding. Chris Cavas photo

Ford and Stennis are docked together at Pier 11 at Naval Station Norfolk, as Stennis awaits its mid-life refueling that will begin next year and Ford conducts post-delivery tests and trials ahead of next year’s in-water full-ship shock trials.

Cmdr. Jennifer Cragg, a spokeswoman for Naval Air Force Atlantic, told USNI News that the Stennis team had started planning a major firefighting drill as early as March, well before the Bonhomme Richard fire. With fires being a serious concern during maintenance periods, especially one as significant as a refueling and complex overhaul, Stennis needed to rehearse firefighting and how to collaborate with local federal firefighters – the carrier was previously homeported in San Diego prior to coming to Virginia for the RCOH, so Mid-Atlantic Fire & Emergency Services was a new partner for the ship in planning this emergency drill.

Still, she said, “once the BHR fire highlighted the imperative for effective [rescue and assistance] teams, Stennis reached out to Ford.”

Cragg said the planning process took about a month and involved the Stennis and Ford damage control teams, as well as civilian personnel from Mid-Atlantic Fire & Emergency Services. They did not discuss the training event with the Bonhomme Richard crew or its chain of command, she said.

Navy leadership has declined to discuss specific lessons learned from the Bonhomme Richard fire but called on ships throughout the fleet to renew their dedication to fire safety and training.

This particular event, while not inspired directly by the amphibious assault ship fire, gets at some of the early challenges of fighting the fire.

Cragg said the goals of the event were to improve “interoperability and experience. We wanted the sailors to feel what it was like to go to another platform and assist in combatting a fire and vice versa. Having participants from multiple organizations allows for improved communications and develop experienced sailors and civilians when called upon. Ford and Stennis are different ship classes with significant differences in layout. So, the training familiarizes both teams with those differences before a real-world event. It was also an important opportunity to familiarize the Stennis crew with Norfolk FED Fire communications capabilities and procedures.”

U.S. Navy Sailors transit the hangar bay towards a simulated fire during an in-port emergency drill aboard the aircraft carrier USS John C. Stennis (CVN 74) in Norfolk, Virginia, Oct. 24, 2020. The John C. Stennis is partnering with Newport News Shipbuilding to complete Refueling Complex Overhaul on schedule with a trained, resilient and cohesive crew. US Navy photo.

Stennis fire marshal Chief Warrant Officer 2 Andrew Woods said in the news release that drilling with these two classes of carriers together is just a first step in the training they hope to accomplish.

“We have never practiced a large-scale firefighting drill like this with other ships supplying all the gear and the sailors we need to back in the space to fight,” he said.
“That’s why we are integrating carrier teams, and then from here it’s probably going to evolve where small ships will support carriers, and carriers will support smaller ships.”

“Integrated training allows us the opportunity to make mistakes and learn from them,” said Chief Warrant Officer 3 Shannon Foster, Ford’s fire marshal. “We need to take time to slow down, ask questions, and figure out where we went wrong because in an actual casualty there is no reset button.”